Accessibility links
Winston Churchill's Way With Words Churchill wrote every word of every one of his speeches — he said he'd spend an hour working on a single minute of a speech. A new exhibit in New York celebrates the British prime minister's extraordinary oratory. 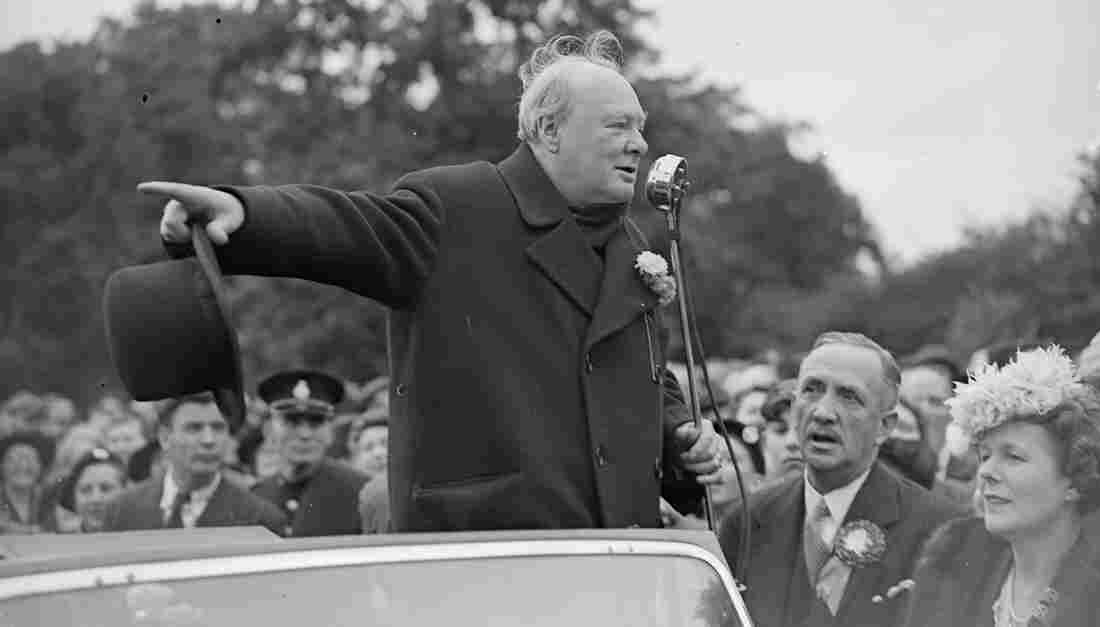 Winston Churchill wrote every word of his many speeches — he said he'd spend an hour working on a single minute of a speech. Above, he is shown speaking during the 1945 election campaign. Express/Getty Images hide caption

Winston Churchill is best remembered as the British prime minister whose speeches rallied a nation under a relentless Nazi onslaught in World War II. But few people know that he won the Nobel Prize in Literature — in part for his mastery of speechmaking. 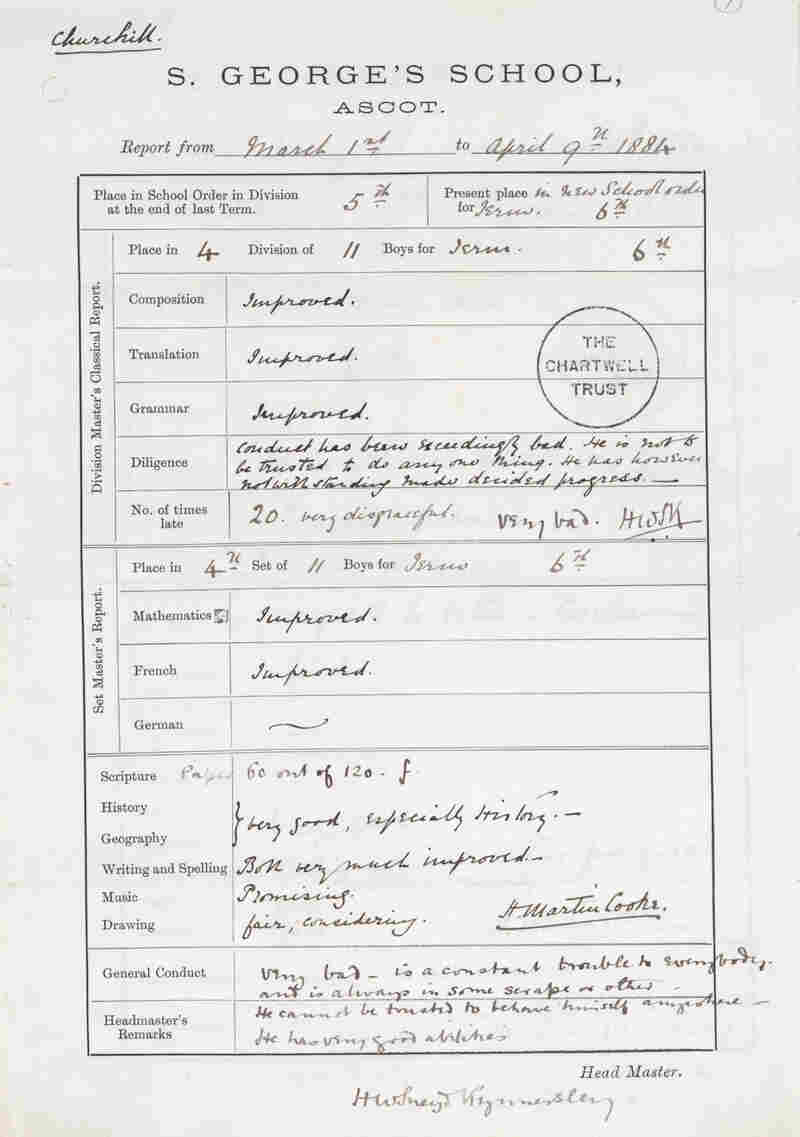 Though he went on to win the Nobel Prize in Literature, Churchill didn't always excel in school. His 1884 school report card states young Winston is "very bad ... a constant trouble to everybody," and unable to be "trusted to behave himself anywhere." Click to enlarge. Courtesy of Churchill Archives Centre, Cambridge hide caption

Now, a new exhibition at the Morgan Library in New York City, Churchill: The Power of Words, holds a megaphone to Churchill's extraordinary oratory.

On May 13, 1940, three days after Germany invaded France, Churchill gave his first speech as prime minister to the House of Commons, a speech that was later broadcast to the public. "I have nothing to offer but blood, toil, tears and sweat," he said, as he helped the country brace for hard times.

"Winston Churchill managed to combine the most magnificent use of English — usually short words, Anglo-Saxon words, Shakespearean," says Andrew Roberts, author of a history of World War II called The Storm of War. "And also this incredibly powerful delivery. And he did it at a time when the world was in such peril from Nazism, that every word mattered."

In another landmark speech, Churchill proclaimed: "You ask, what is our aim? I can answer in one word: victory. Victory at all costs. Victory in spite of all terror. Victory, however long and hard the road may be, for without victory there is no survival."

Before he became prime minister, Churchill had already written an acclaimed four-volume history of World War I. After World War II, he wrote a six-volume memoir. His historical writings, along with his speeches, earned him the Nobel Prize in Literature.

Declan Kiely, curator of manuscripts at the Morgan Library, points out Churchill's 1953 Nobel Prize citation, a gilt booklet that accompanies the gold Nobel Medallion. He describes it as "a modern illuminated manuscript."

The citation, Kiely says, is wonderful. (To see it, click here.) Translated from the Swedish it reads: For his mastery of historical and biographical description, as well as for brilliant oratory in defending exalted human values. 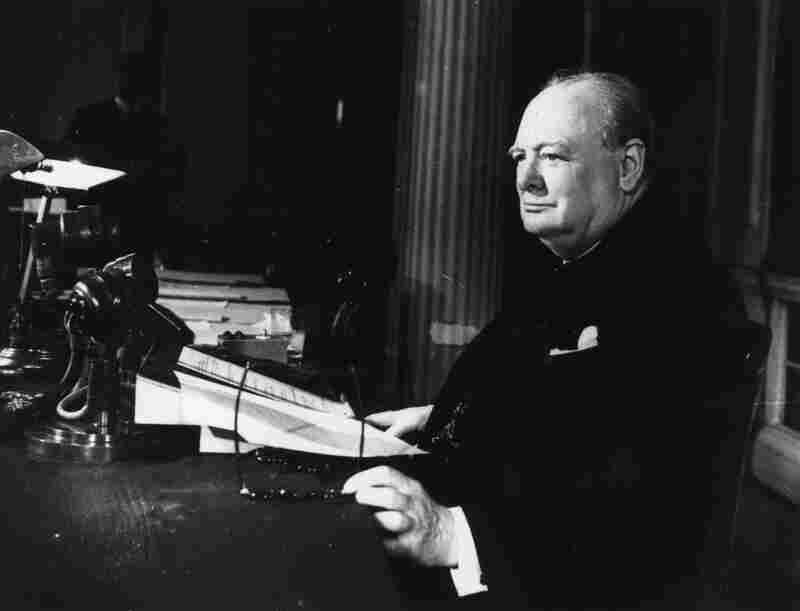 Churchill makes his broadcast to the world on V-E Day, May 8, 1945. Keystone/Getty Images hide caption 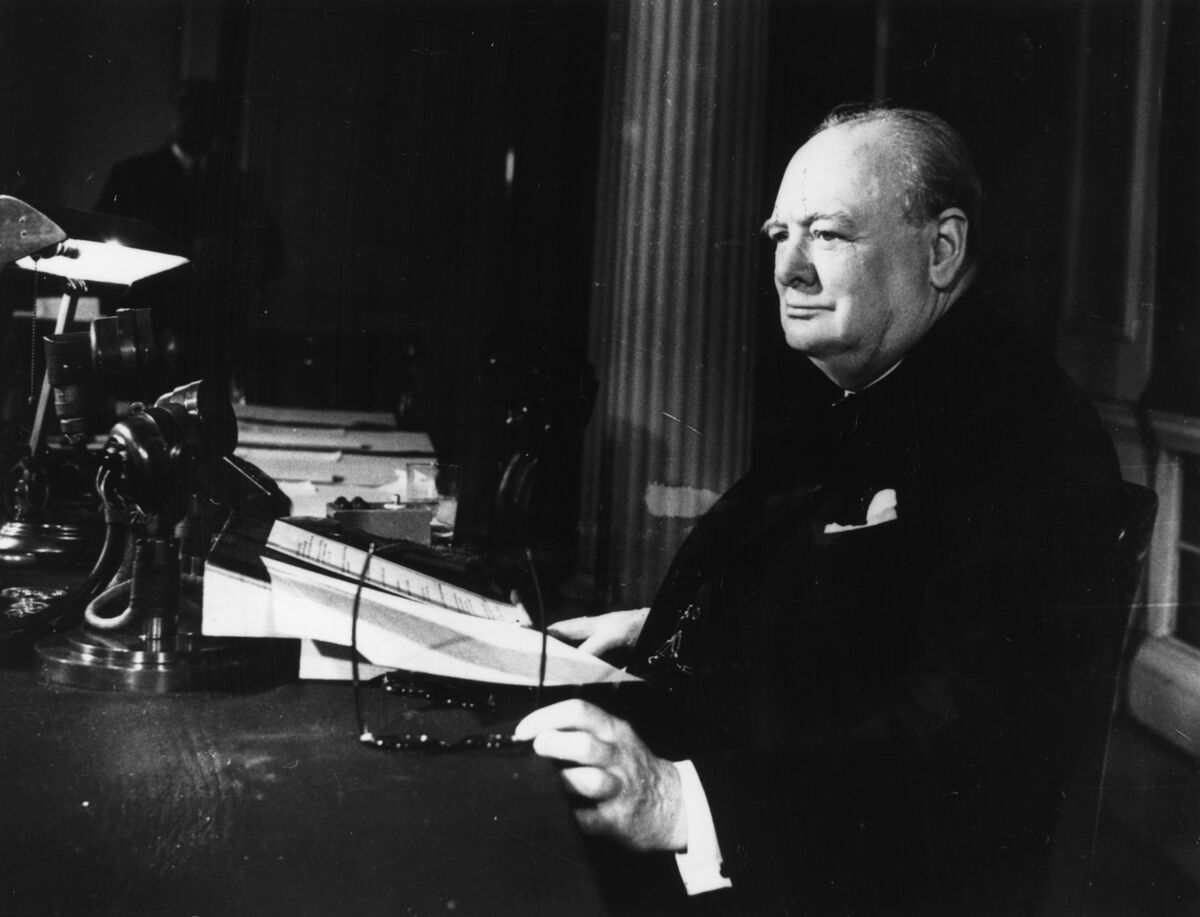 Churchill wasn't born a master orator — he overcame a childhood lisp by practicing enunciation. He understood the power of words early in his career.

As a 23-year-old British soldier in India, Churchill wrote an essay called "The Scaffolding of Rhetoric." The original manuscript is in the Morgan exhibition.

"The climax of oratory is reached by a rapid succession of waves of sound and vivid pictures," Churchill wrote.

"Those are the kinds of things you see 40 years later," says Kiely. "He's using these vivid pictures and these great, successive waves of sound."

You can hear the way he employed these rhetorical methods in the weekly radio address he gave on Sept. 11, 1940, as he responded to Hitler's merciless aerial assault on London:

This monstrous product of former wrongs and shame has now resolved to try to break our famous island race by a process of indiscriminate slaughter and destruction. What he has done is to kindle a fire in British hearts which will glow long after all traces of the conflagration he has caused in London have been removed.

Churchill wrote every word of his many speeches — he said he spent an hour working on every minute of a speech he made. At the Morgan Library are several drafts of a single speech from February 1941, when England stood alone against the Nazi onslaught and Churchill appealed to President Roosevelt for aid. The first draft looks like a normal typescript; the final draft, says Kiely, "looks like a draft of a poem." 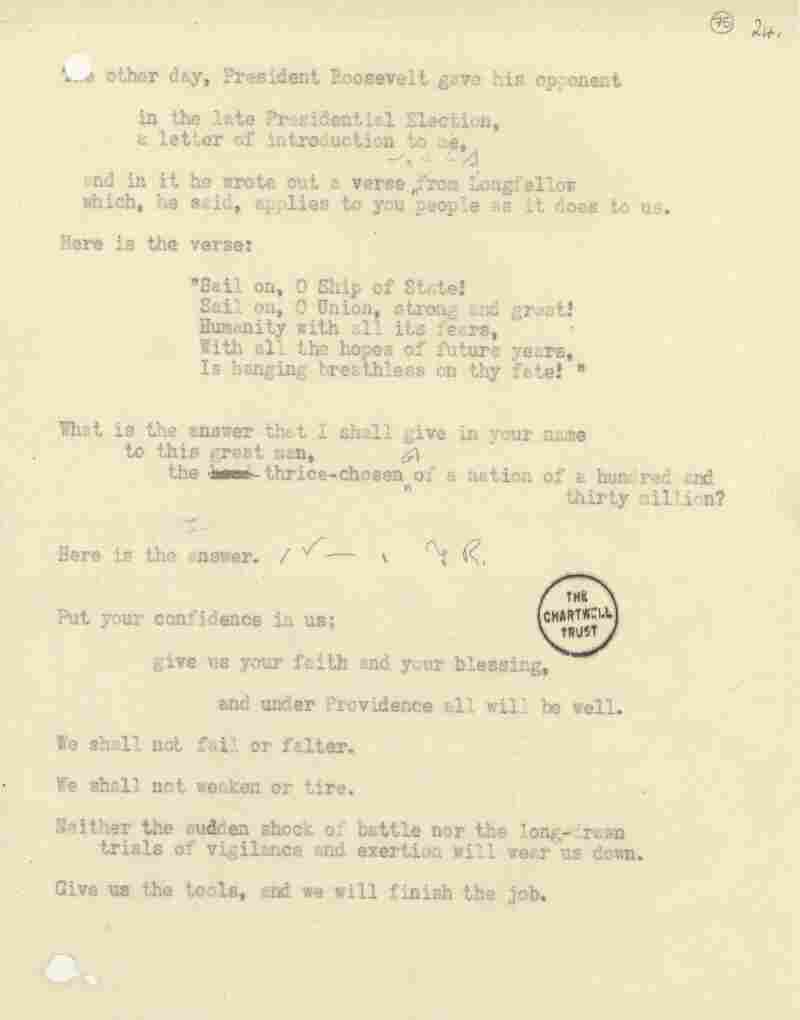 Churchill spaced and marked his speeches to help him with his delivery. Above is the final draft of the speech he broadcast on Feb. 9, 1941. Click to enlarge. Churchill Archives Centre, Cambridge, and the Estate of Winston Churchill hide caption

Churchill made those markings, Kiely explains, to indicate how the speech should be delivered. He inserted white space to remind himself to pause.

Churchill asked: "What is the answer that I shall give, in your name, to this great man, the thrice-chosen head of a nation of a hundred and thirty millions?"

Here, lots of white space is inserted into the final draft.

"Here is the answer which I will give to President Roosevelt."

Another long pause, and then he said:

Put your confidence in us. Give us your faith and your blessing, and under Providence, all will be well. We shall not fail or falter. We shall not weaken or tire. Neither the sudden shock of battle, nor the long‐drawn trials of vigilance and exertion will wear us down. Give us the tools, and we will finish the job.

In the dark days and darker nights when England stood alone — and most men save Englishmen despaired of England's life — he mobilized the English language and sent it into battle.

Historian Andrew Roberts says the impact of Churchill's speeches cannot be underestimated. "An awful lot of people thought that it was impossible to beat the Nazis," Roberts says. "Yet what Winston Churchill did, by constantly putting Britain's peril in the greater historical context of other times that Britain had nearly been invaded, but had been ultimately successful, he managed to tell the British people that this could happen again."

On April 9, 1963, President John F. Kennedy summed up Churchill's speechwriting achievements, saying, "In the dark days and darker nights when England stood alone — and most men save Englishmen despaired of England's life — he mobilized the English language and sent it into battle."

On June 18, 1940, immediately after the fall of France, Churchill rallied the British people once more. With his characteristic Shakespearean gusto, he declared, "Let us therefore brace ourselves to our duty, and so bear ourselves, that if the British Empire and its Commonwealth last for a thousand years, men will still say, 'This was their finest hour.' "

In 1938, Churchill said dictators were afraid of the power of words. "A state of society where men may not speak their minds cannot long endure."