Accessibility links
Miners Weather The Slow Burn Of Coal's Demise For decades, coal represented half of the nation's electricity generation, but it dropped to only 34 percent in March. Technological breakthroughs in fracking have led to a gas boom that's caused prices to plummet, and now hundreds of coal miners are being laid off as the nation shifts away from the oldest and most plentiful source of electricity in the U.S. 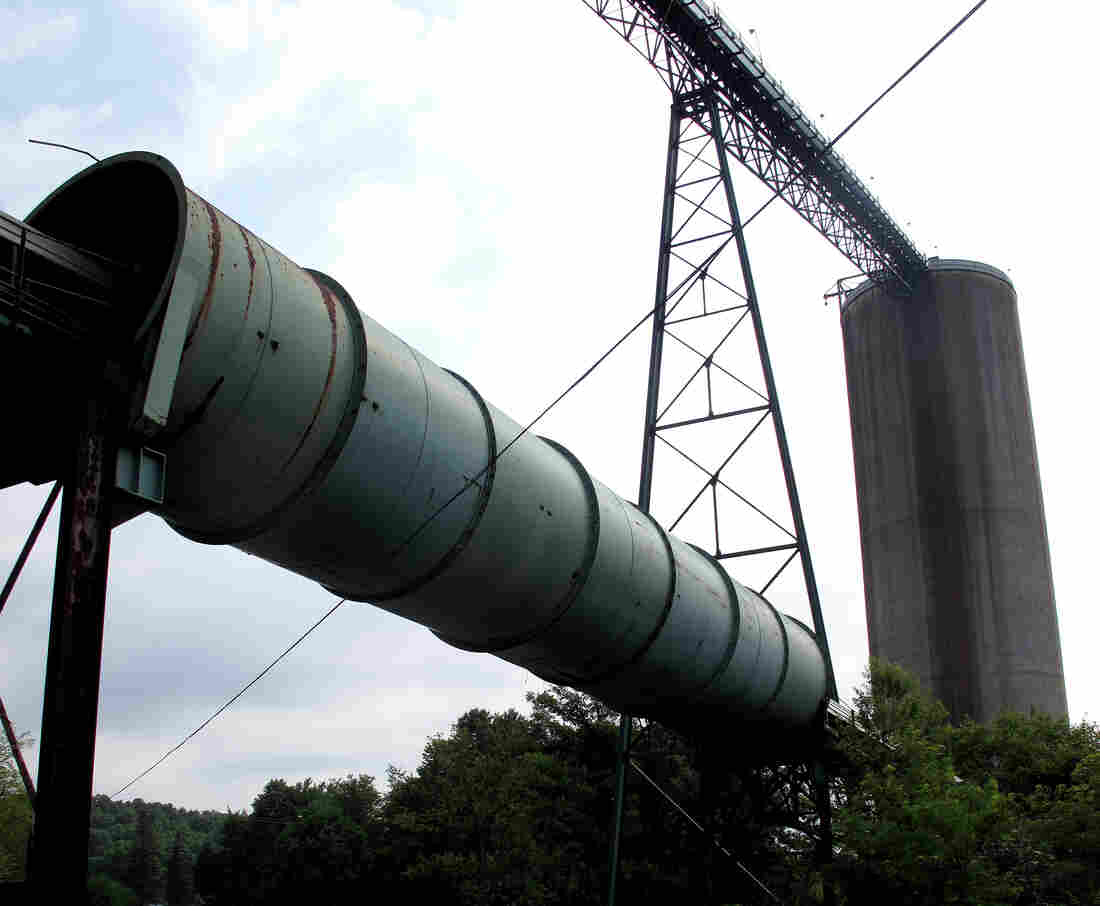 Equipment for transporting and housing coal sits idle in Cowen, W.Va. Since the natural gas boom, several mines in Webster County have either slowed or shut down operation, laying off hundreds of workers. Guy Raz/NPR hide caption 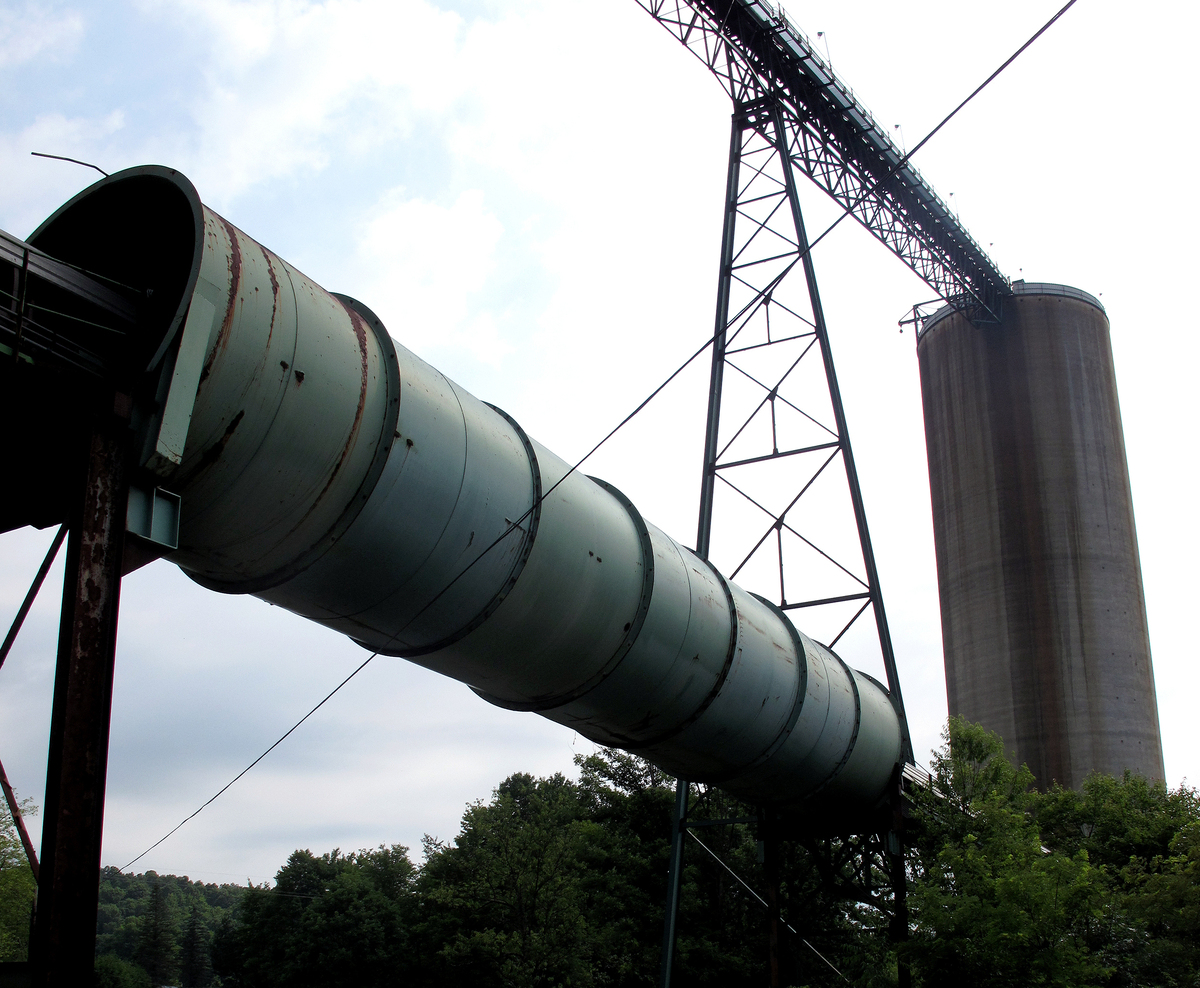 Equipment for transporting and housing coal sits idle in Cowen, W.Va. Since the natural gas boom, several mines in Webster County have either slowed or shut down operation, laying off hundreds of workers.

At some point today, you will probably flip on a light switch. That simple action connects you to the oldest and most plentiful source of American electricity: coal.

Since the early 1880s — when Edison and Tesla pioneered the distribution of electrical power into our homes — most of that power has come from the process of burning coal.

Four years ago, something started to change. First it was slow, and then this past month that change became dramatic. Coal now generates just 34 percent of our electricity, down from about 50 percent just four years ago.

Now, the loss of coal as the dominant energy source is having damaging effects on the towns that once relied on the black rock for their livelihood.

The Towns That Coal Built

In front of the historic courthouse in Webster Springs, W.Va., in Webster County, a huge slab of shiny, black coal sits as a symbol of what helped build the county of about 9,000 people.

Last month, Arch Coal, the operator of one of the biggest mines in the county, announced a round of devastating layoffs — more than 1,300 employees in West Virginia and Kentucky alone. Between the other big players in central Appalachia — Consol, Patriot, Alpha — thousands more jobs have been lost. This past week, Patriot Coal filed for bankruptcy protection.

"I've never seen anything as quick as this to devastate the market, and this many layoffs at one time," says Thomas Clark, publisher of The Echo newspaper and a mine inspector for the past four decades. "It's been a landslide." 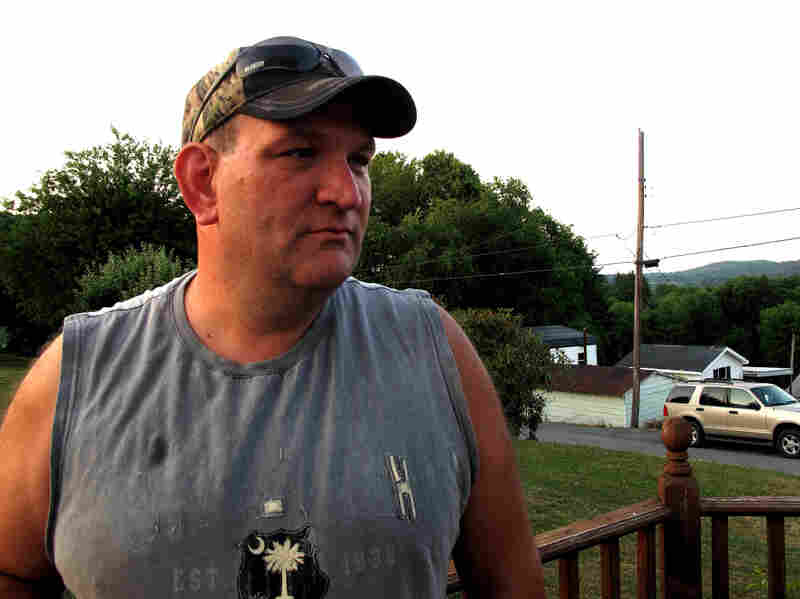 Rich Lewis worked as a miner for almost two decades before being laid off by Arch Coal. He says he's considering taking a job at another mine, but it's not certain that mine will stay open. Michael Tomsic/NPR hide caption 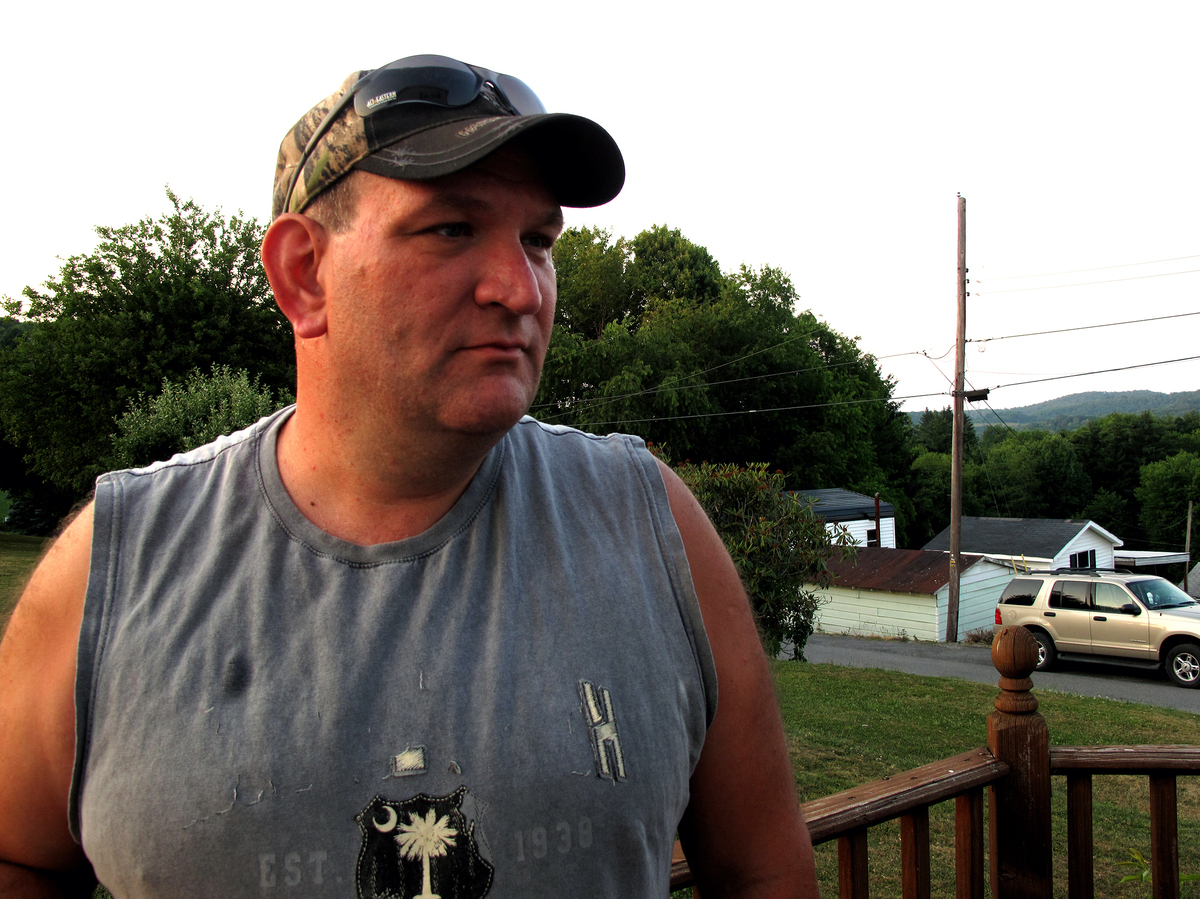 Rich Lewis worked as a miner for almost two decades before being laid off by Arch Coal. He says he's considering taking a job at another mine, but it's not certain that mine will stay open.

A few miles from Webster Springs, outside the town of Cowen, W.Va., a massive steel hopper stands silent like an abandoned roller coaster. Just a few weeks ago, it was humming with the sound of thousands of tons of black coal coming down the mountaintop mine along a giant conveyer belt and into a silo the size of a 15-story building.

For 19 years, Rich Lewis worked as a miner on this mountain and for most of those years he was able to work as much as he needed, including weekends and overtime.

Today, there are no trains to collect the coal, and they won't be coming back here — ever.

When Arch Coal gathered all 170 employees to make the grave announcement, Lewis' superintendant told them they were selling the coal at $56 a ton, but it was costing $70 a ton to operate with all of the equipment they used. Everyone, including Lewis, would be laid off.

Of the three mines in Webster County, just one is still operating today.

Todd Bragg, a friend of Lewis' and fellow miner, had been mining since he was 19. Before he was laid off by Arch Coal a few weeks ago, the 37-year-old had been making more than twice the median income of $25,000 in Webster County.

A Disappearing Town In The Shadow Of Big Coal

"[It] helped me survive, paid for my family ... everything," Bragg says. "It's a shock to everybody. What are we going to do?"

Still, Bragg and Lewis are grateful. Arch Coal gave them two months' severance and will cover their health insurance until Thanksgiving.

For many people in Webster County, the general consensus is that the Environmental Protection Agency and tough new regulations are the main culprits behind what's hurting the coal industry.

Back in March, the EPA announced standards that require all new coal-fired electricity plants to cut carbon emissions by half. It's an expensive proposition, and it's leading many power companies to back away from coal.

But to get to the heart of what's really killing coal, you have to travel south from Webster County about 500 miles, to Atlanta.

"It is part of our commitment to our customers to provide reliable, low-cost energy," he says.

Railroad tracks once led to the facility and, every two days, a 100-car train would pull up filled with coal. Tramonte says they once consumed 5,000 tons of coal a day, but no longer. Those tracks are now dismantled and the old coal turbines are gone.

Georgia Power, like a growing number of power companies, is ditching coal and switching to natural gas. Tramonte explains that one reason is the overall dramatic air quality improvement.

The bigger reason for the switch, however, is more mundane: money.

Domestic natural gas is killing coal because it's cheap and abundant. Four years ago, electricity generated by gas was twice as expensive as coal. Today, gas is less than half the price of coal.

"What that means is, literally, natural gas is going to kill more coal-fired power plants than the EPA regulations," says Michael Zenker, a coal analyst for Barclays.

In 2012, Zenker says, a perfect storm of sorts took place that sent coal down a deep spiral: an unseasonably warm winter, a significant reduction in electricity demand and, most importantly, hydraulic fracturing or fracking.

Fracking is the controversial process by which gas can be extracted by drilling deep into rock formations. A decade ago, not a single drop of American gas was produced this way; today one-third of all our gas is now the product of fracking.

Last month, for the first time in U.S. history, natural gas generated as much electricity as coal.

"We could see coal down at 15 or 20 percent of electric supply over the next decade," says David Victor, a fossil fuel expert at the University of California, San Diego. "That would be a huge change in an industry that historically has relied on coal for 50 percent or more of the electric supply."

There have been times when coal's demise has been prematurely predicted, most notably in the 1980s. But the U.S. is still a coal powerhouse, often called the Saudi Arabia of coal. This time, though, says Victor, is different.

"We were talking about the death of coal in the '80s, but coal was half of the electric power supply, it didn't change very much," he says. "Now we're talking about ... terminal illness for coal in the advanced industrialized countries, and it is actually happening."

For places like Webster County, the consequences are real. Todd Bragg and Rich Lewis are considering taking jobs at a mine in Grafton, W.Va., about 100 miles away. The owners of that mine say it'll produce coal for the next 30 years. But with higher costs and declining revenue, that promise is questionable. For Bragg, it could be the difference between unemployment and a few more years of security.

"That'll be close to retirement age, if it lasts," he says. "With gas the way it is now, you don't know what's going to happen."