Accessibility links
From Coal To Gas: The Potential Risks And Rewards A new report links some extreme weather events to climate change, but greenhouse gas emissions have been declining in recent years. In part, the decrease might be attributed to the change from coal to natural gas for energy production, but that too has its critics, and draws concerns over potential environmental impact. 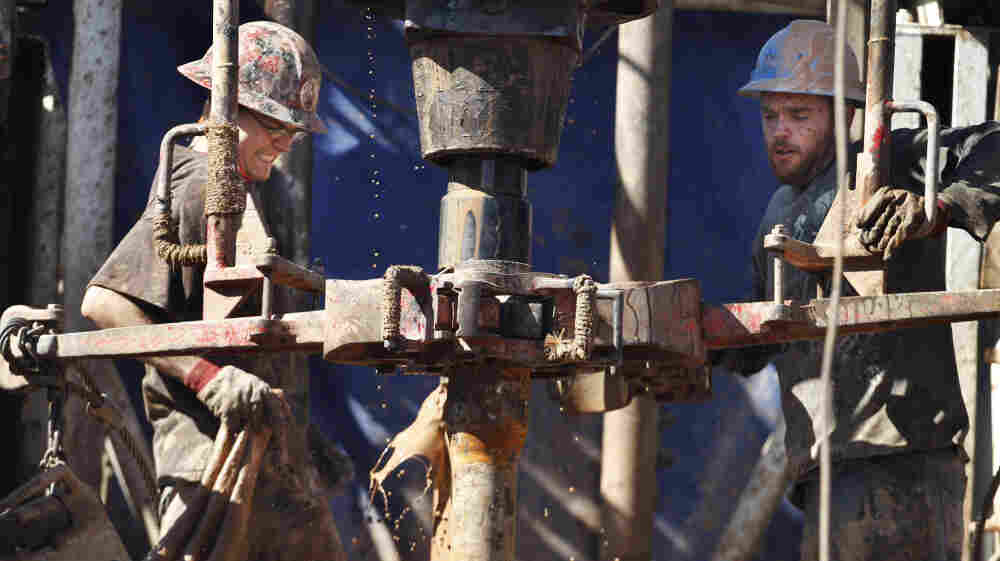 Oil field workers drill into the Gypsum Hills near Medicine Lodge, Kan. Hydraulic fracturing, or "fracking," to coax out oil and gas has led to a natural gas boom, but some remain concerned of the potential environmental impact. Orlin Wagner/AP hide caption 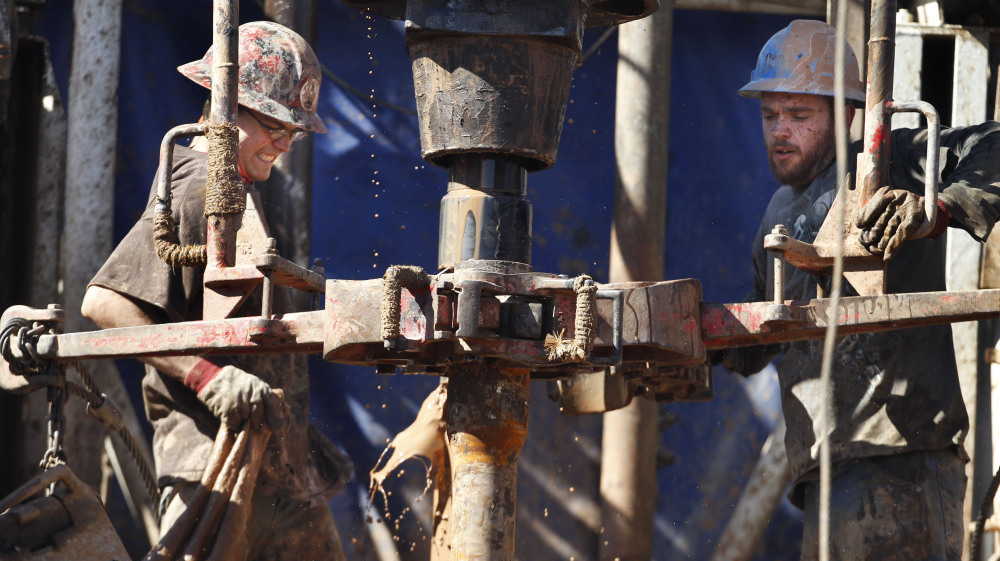 Oil field workers drill into the Gypsum Hills near Medicine Lodge, Kan. Hydraulic fracturing, or "fracking," to coax out oil and gas has led to a natural gas boom, but some remain concerned of the potential environmental impact.

This past week, the National Oceanic and Atmospheric Administration (NOAA) released a report linking climate change to some of the extreme weather events of 2011, like the devastating drought in Texas and record high temperatures in Britain.

None of this bodes well for the future, but there is a glimmer of hope. It turns out that U.S. carbon emissions are down nearly 8 percent since 2006.

Much of that has to do with the weak economy — people are consuming less electricity. But another part could be related to the decline of coal and the rise of cleaner-burning natural gas. This boom in natural gas has been killing the Appalachian coal industry, but it also has environmental impacts both good and bad.

Philip Mote is the director of the Oregon Climate Change Research Institute at Oregon State University and one of the authors of the NOAA report. He and a team looked at last year's drought in Texas and compared what happened there with climate models going back five decades.

They wanted to figure out the odds that the drought was indeed related to climate change, and he tells weekends on All Things Considered host Guy Raz that it was an extreme event that was beyond anything that had happened before, but is likely to happen again.

"Certain types of extreme weather events, it's pretty clear, are increasing and will increase as the climate changes," Mote says. Extreme heat events being one, he says, as well as extreme rainfall. There have been some extreme cold events, however, but he says they shouldn't be mistaken for evidence against global warming.

Mote's hope is that this report gives us a better understanding of what's happening in the world. In this case, he says, we're talking about events that are part of a larger portrait of how we're changing the climate.

"Even without climate change, in some respects, the ever-growing human race is very unprepared for extreme events," he says. "But we should certainly be prepared for those events we think of as unlikely and they're actually getting more likely."

The question now is whether human behavior can halt the pace of climate change. President Obama has set a goal of reducing U.S. greenhouse gas emissions by 17 percent by the end of this decade.

Another study suggests that goal might actually be feasible. Not because of tough new regulations or even legislation, but because of the increasing use of natural gas to generate electricity.

Gas is one of the cheapest sources of electricity generation, now half the price of coal. Much of this a recent development, the result of advances in hydraulic fracturing or fracking, the controversial process by which gas is extracted from deep under rock formations. Fracking now produces a third of all U.S. natural gas.

Lawrence Cathles, a professor at Cornell University who wrote that study, took a close look at natural gas usage and he found that replacing coal with natural gas would cut about 40 percent of carbon emissions linked to global warming.

"When you burn natural gas it's a cleaner burning fuel," Cathles tells Raz. "But the more significant thing ... natural gas can generate electricity with almost twice the efficiency in terms of conversion of energy content of fuel."

Natural gas is made up largely of methane, and some of it can leak as the gas is extracted and transported. Cathles says leakage of gas from well site to customer through pipes and compressors is about 1.5 percent of total production of gas.

"So we are losing gas, but it's not significant from a climate point of view," he says.

Even with that 1.5 percent or even 2 percent leakage — which Cathles does think is too much — he says if natural gas replaces coal, greenhouse gas emissions would decrease by up to 40 percent.

As far as the danger to water supplies, which critics cite as one of the issues with fracking, Cathles disagrees.

"You can't smell, you can't taste [methane]; you really don't know it's there [and] it's not harmful to you," Cathles says. Methane does pose an explosion danger in higher concentrations, however.

The risk of methane escape, Cathles says, is in tapping out a shallow gas pocket, something that would happen even if you drilled a water well. He says that risk is worth it.

"[If] we can get 40 percent of the distance we need to by accepting new availability of natural gas ... I think it makes just good sense to do it," he says.

Even with the reduction in U.S. carbon emissions in recent years, is it enough to slow down climate change? David Victor, a fossil fuel expert at the University of California, San Diego, says the jury is still out.

"While there's been a big reduction in U.S. emissions of carbon dioxide because of this shift to natural gas," Victor says, "it hasn't led to the kind of reductions you need to stop global warming, which is a 50 percent to 80 percent reduction."

Victor agrees that the gas revolution is not all roses, and that the U.S. needs to be vigilant about the environmental side affects, including small earthquakes from wells and the potential dangers to local water supplies.

"If the best practices aren't used on the well then some [waste]water can leak into ground water and be spilled on the surface and so on," he says. "There are air pollution concerns associated with fracking as well, so we need to find ways to address those."

Continued monitoring of natural gas production methods is important, Victor says, in order to make sure that we aren't accidentally making the problem worse by shifting to fracking and natural gas. At its best, he says, natural gas is a bridge to a future where we have lower emissions.

"It's better to have a bridge than nothing," he says.

For now, natural gas is on a rapid ascent. Last month, for the first time in U.S history, gas generated as much electricity as coal, now one-third of all our power.