Accessibility links
Even Scalia's Dissenting Opinions Get Major Scrutiny Justice Antonin Scalia's dissent in the Arizona immigration case led a noted liberal to call for his resignation, and a fellow conservative jurist likened it to a "campaign speech." But during a quarter century on the high court, the colorful Scalia's writings — even in the minority — have sometimes steered the court. 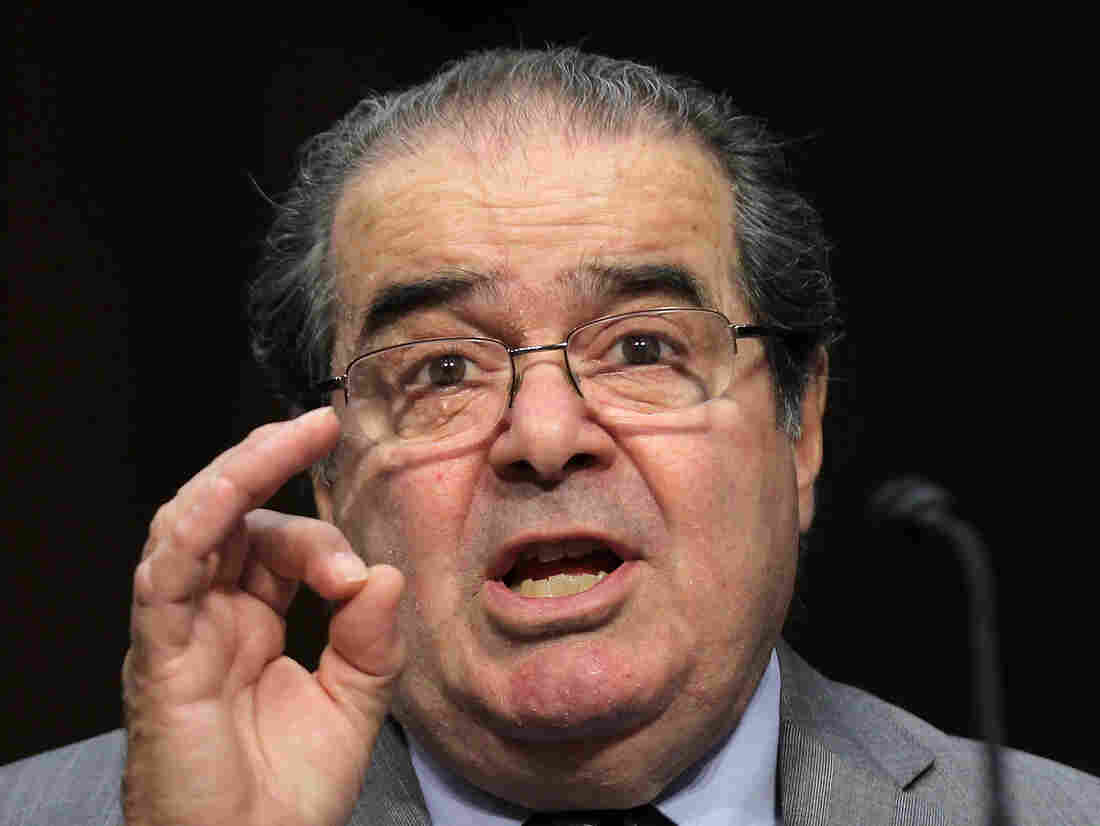 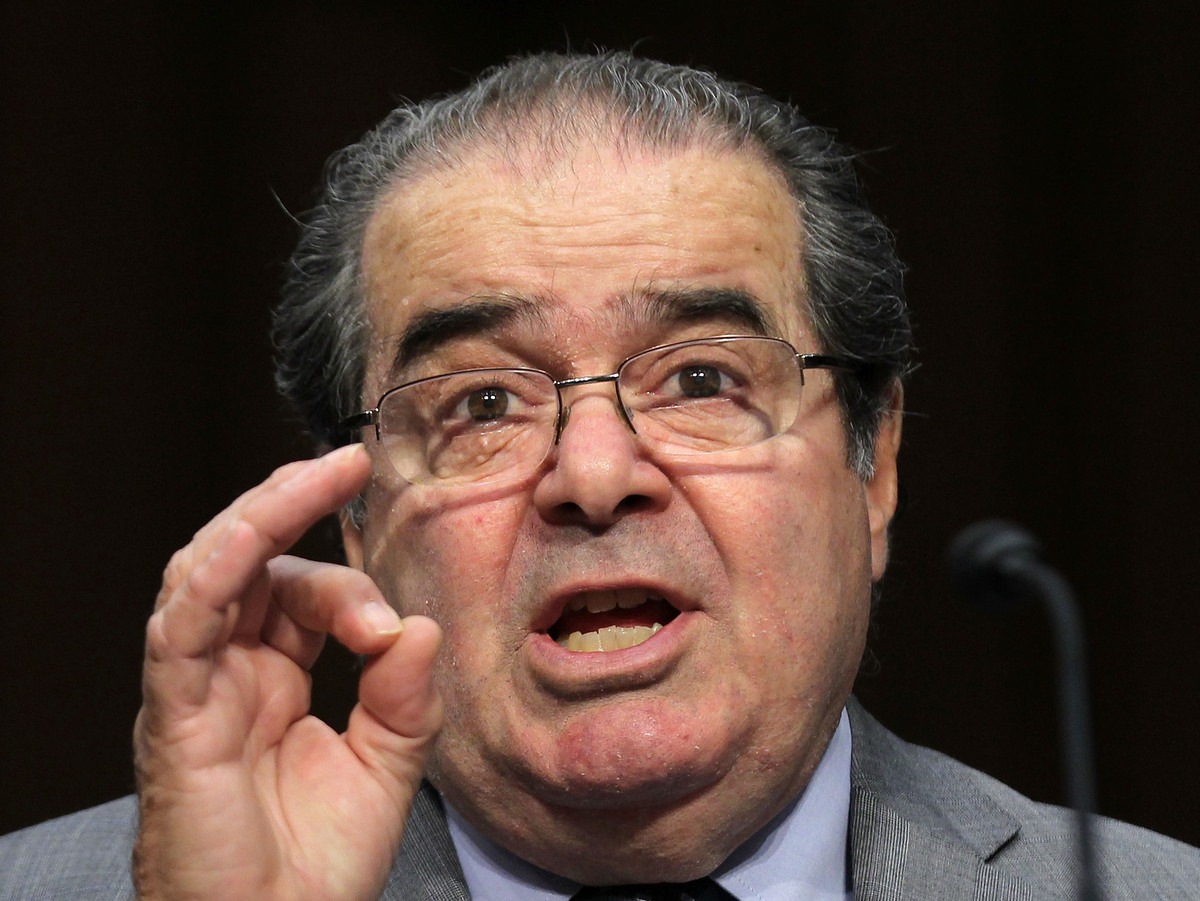 As legal observers have sifted through the ashes and the tea leaves of the recent Supreme Court term, one justice has stood out for his dissents.

Justice Antonin Scalia was the first name on the joint dissent filed by four justices in the health care case. But it was Scalia's dissent in the Arizona immigration case, written for himself alone, that drew particular attention, and especially harsh criticism.

Speaking from the bench, he castigated the majority for striking down much of the state's anti-immigration law and excoriated the Obama administration in particular for what he called its "refusal" to enforce the nation's immigration laws.

While the court majority said that much of the state anti-immigration statute was trumped by a less draconian federal law, the crux of Scalia's dissent was that states have sovereignty under the Constitution to enact their own immigration laws, and that Arizona therefore was within its rights to create new penalties for federal immigration violations.

Scalia went on to denigrate the president's initiative to allow children brought to the U.S. illegally by their parents to stay in the country under certain circumstances — an issue not before the court. And he said that if the original 13 colonies had known that in immigration matters they would be "at the mercy of the federal government," they would never have joined the Union. Neither of the other two dissenters, Justice Clarence Thomas and Justice Samuel Alito, joined the opinion.

"Justice Scalia, by the end of the term, was apoplectic," says SCOTUSblog publisher Tom Goldstein, observing wryly that even that characterization might be "an understatement."

In a quarter century on the Supreme Court, Scalia has become known for, among other things, a writing style more colorful than the typical justice. Here is a small sample from dissenting opinions in high-profile cases.

"The Louisiana legislators had been told repeatedly that creation scientists were scorned by most educators and scientists, who themselves had an almost religious faith in evolution. It is hardly surprising, then, that, in seeking to achieve a balanced, 'nonindoctrinating' curriculum, the legislators protected from discrimination only those teachers whom they thought were suffering from discrimination."
— Edwards v. Aguillard (1986), which held that a Louisiana law that forbade the teaching of evolution if it was not accompanied by the teaching of "creation science" violated the First Amendment's Establishment Clause

"The Court today has applied 'interest-balancing' analysis where the text of the Constitution simply does not permit it. We are not free to conduct a cost-benefit analysis of clear and explicit constitutional guarantees, and then to adjust their meaning to comport with our findings. The Court has convincingly proved that the Maryland procedure serves a valid interest, and gives the defendant virtually everything the Confrontation Clause guarantees (everything, that is, except confrontation). I am persuaded, therefore, that the Maryland procedure is virtually constitutional. Since it is not, however, actually constitutional, I would affirm the judgment of the Maryland Court of Appeals reversing the judgment of conviction."
— Maryland v. Craig (1990), which allowed a child victim to testify behind a screen in the courtroom.

"Roe fanned into life an issue that has inflamed our national politics in general, and has obscured with its smoke the selection of Justices to this Court in particular, ever since. And by keeping us in the abortion umpiring business, it is the perpetuation of that disruption, rather than of any pax Roeana, that the Court's new majority decrees."
— Planned Parenthood v. Casey (1992), which upheld the right to an abortion and reaffirmed Roe v. Wade

"Much of the Court's opinion is devoted to deprecating the closed mindedness of our forebears with regard to women's education, and even with regard to the treatment of women in areas that have nothing to do with education. Closed minded they were — as every age is, including our own, with regard to matters it cannot guess, because it simply does not consider them debatable. The virtue of a democratic system with a First Amendment is that it readily enables the people, over time, to be persuaded that what they took for granted is not so, and to change their laws accordingly. That system is destroyed if the smug assurances of each age are removed from the democratic process and written into the Constitution."
— United States v. Virginia (1996), which held that the Virginia Military Institute could no longer bar women

"The game of bait-and-switch that today's opinion plays upon the Nation's Commander in Chief will make the war harder on us. It will almost certainly cause more Americans to be killed."
— Boumediene v. Bush (2008), which held that Guantanamo detainees have a constitutional right to meaningful review of their detentions by federal courts

"But that is his wont," Goldstein adds. "Justice Scalia cares so passionately about these issues that he wears his heart on his sleeve and the blood runs through his pen."

Even conservative federal Judge Richard Posner, who sits on the 7th U.S. Circuit Court of Appeals, said Scalia's dissent was unmoored to the facts. "There were no citations to that part of Justice Scalia's opinion, where he talks about the people of Arizona are trying to defend themselves from this horde," Posner said. "It gives that part of the opinion the air of a campaign speech."

But while critics sometimes see Scalia's outrage as outrageous, at other times, he has proved to be prescient, sometimes even seeing his dissents transformed, years later, into majority opinions.

Some of Scalia's most irate dissents have involved abortion and homosexuality. In 2000, he dissented from the bench when the court voted 6 to 3 in favor of buffer zones at abortion clinics to protect women from being harassed.

"Does the deck seem stacked? You bet," Scalia growled from the bench, declaring the majority opinion "merely the latest of many aggressively pro-abortion novelties announced by the court in recent years."

"Today's distortions are particularly blatant, Scalia continued. "As a result, our longstanding commitment to uninhibited, robust and wide-open debate is miraculously replaced by the power of the state to protect an unheard of right to be let alone on the public streets."

In 2003, Scalia again erupted when the court struck down a Texas law that made it a crime to engage in private homosexual conduct behind closed doors. The Constitution, Scalia contended, leaves it to the legislature to decide what conduct is a crime, and if the basis for the state's decision is its moral judgment, all the better. After all, he observed, morality is the basis for criminal laws against polygamy, adultery, incest, bestiality and obscenity.

"This effectively decrees the end of all morals legislation," Scalia declared. "It is clear from this that the Court has taken sides in the culture wars and, in particular, in that battle of the culture wars that concerns whether there should be any moral opprobrium attached to homosexual conduct."

While the court majority stressed that its decision had nothing to do with gay marriage, Scalia replied: "Do not believe it. Today's opinion dismantles the structure of constitutional law that has permitted a distinction to be made between heterosexual and homosexual unions."

To some extent, Scalia was right: The issue of same-sex marriage is expected to be before the Supreme Court next term.

The death penalty is another topic that reliably provokes strong Scalia dissents. Each time the court has moved to limit the reach of the capital punishment — for juveniles or the mentally retarded, for instance — Scalia has expressed his full-throated disagreement. In 2002, when the court barred the death penalty for those with mental retardation, Scalia read an angry dissent from the bench.

"What today's opinion says is that if it is found that [a defendant] scores 59 on the state scale that makes 60 the lowest grade of non-retarded, he cannot receive the death penalty, no matter how many people he tortured to death, no matter how much the jury believes he knew precisely what he was doing."

"Which takes greater maturity, do you suppose?" Scalia asked. "Deciding whether to have an abortion or whether to throw a live and conscious woman to her death over a bridge?"

Not all of Scalia's dissents are on the conservative side. In the aftermath of Sept. 11, the first Supreme Court ruling on indefinite detention of those seized on the battlefield involved an American citizen. The court plurality ruled against the Bush administration but left room for indefinite detention of American citizens without trial. Not Scalia. The Supreme Court, he maintained, has no power to do that. The court's only power, he said, is to order the prisoner tried under the normal criminal law, or released.

Quoting the famous legal authority William Blackstone, Scalia alluded to the tyranny of government violence or confiscation of property. "But confinement of the person by secretly hurrying him off to jail where his sufferings are unknown or forgotten is a less public — and therefore more dangerous — engine of arbitrary government."

Then too, there are the dissents that with foresight, seem to forecast events. Perhaps the best example was Scalia's solo dissent in 1988, when the Supreme Court upheld the constitutionality of the independent counsel law, a statute enacted after President Nixon's firing of the prosecutor appointed by the attorney general to investigate Watergate.

The subsequently enacted law empowered a three-judge court to appoint an independent counsel if the attorney general could not quickly dispose of charges against high-ranking administration officials.

While the court, by a 7-to-1 vote, ruled the statute constitutional, Scalia saw it as a dangerous curb on executive power that would lead to unaccountable prosecutors bringing politically motivated cases. What if the judges with the appointing power "are politically partisan, as judges have been know to be," he wondered, "and select a prosecutor antagonistic to the administration, or even to the particular individual who has been selected for this special treatment?"

"There is no remedy for that," Scalia warned, "not even a political one."

Republicans were the first to agree with Scalia's assessment and were soon joined by Democrats upset over judicially appointed independent counsel Kenneth Starr's broad investigation of President Clinton. After that, Congress effectively repealed the special prosecutor law.

Finally, there are Scalia dissents that, over time, become the basis for majority opinions. Consider, for example, campaign finance law, and Scalia's dissent from a 1990 decision upholding a Michigan ban on corporate spending in state elections.

"Despite all the talk in today's opinion about corruption and the appearance of corruption ... it is entirely obvious that the purpose of the law we have approved today is not to prevent corruption but to prevent speech," Scalia said. "The premise of our system is that there is no such thing as too much speech."

Twenty years later, Scalia saw that dissent transformed into the law of the land. In 2010, a new conservative majority stuck down a long-held legal understanding that previously had limited corporate and labor campaign spending on candidate elections. For the first time in a century, the court declared that corporations were people with free-speech rights for purposes of campaign spending and were thus free to spend as much as they want in candidate elections.

That may be a pattern that is repeated next term when the court is expected to consider a variety of controversies where Scalia is more likely to prevail. In the meantime, for those who wring their hands over the justice's impassioned, even occasionally intemperate dissents, one could imagine Scalia's reply: "Get over it."