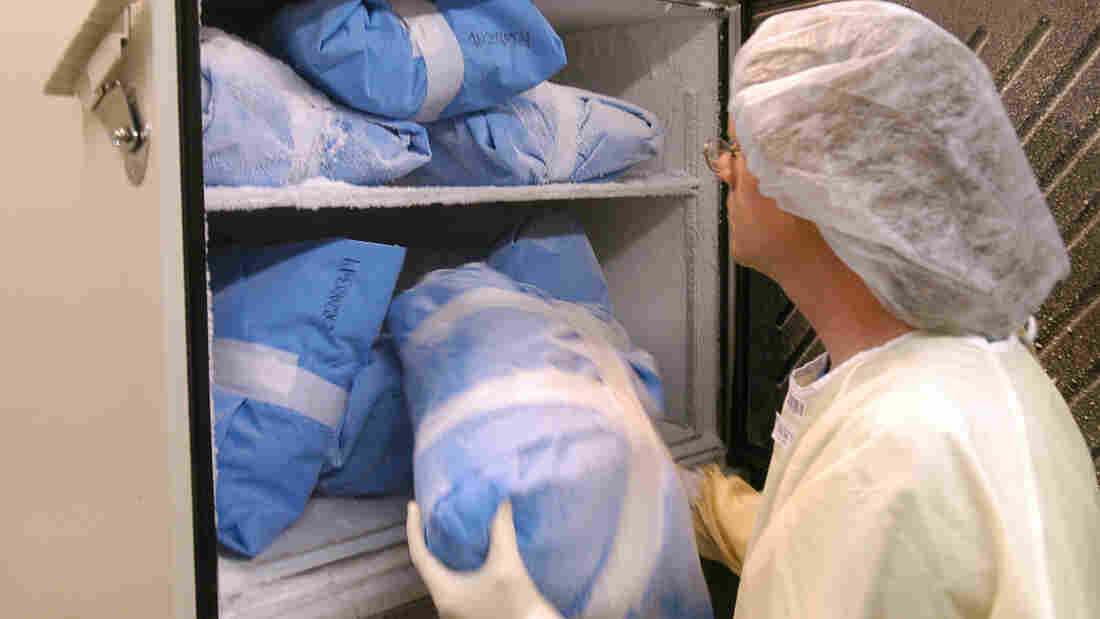 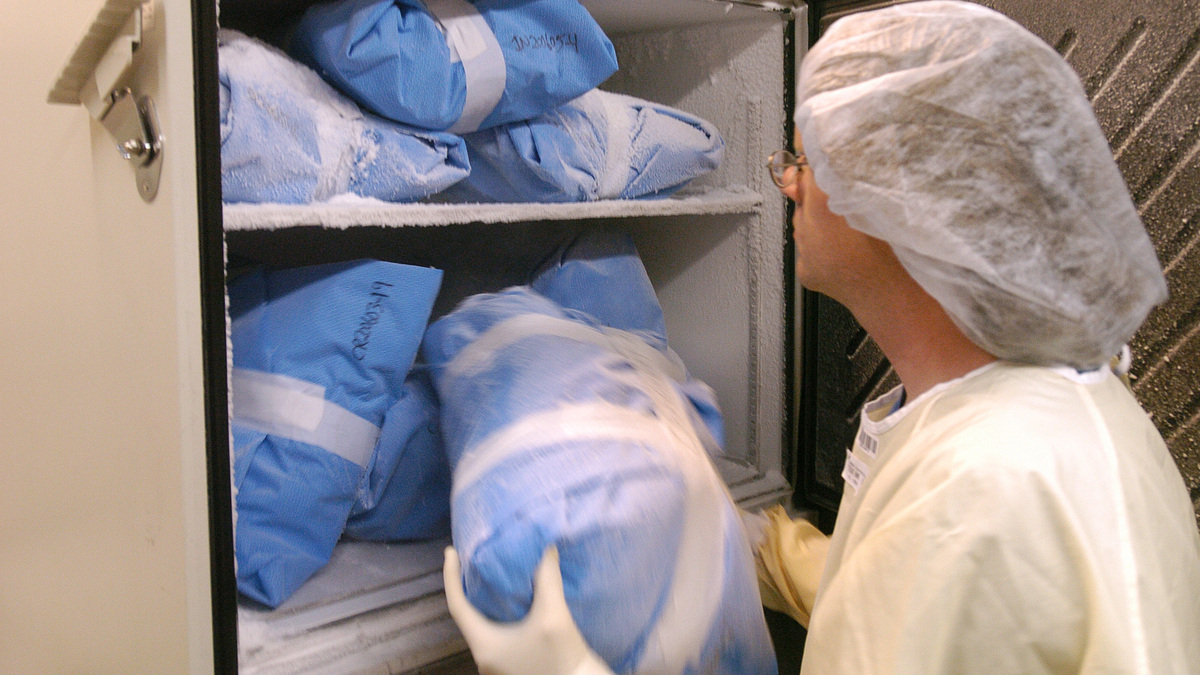 Unlike organs, tissue doesn't need to be transplanted immediately. Storage facilities like Tissue Banks International in San Rafael, Calif., process and store donated tissue for later use in medical products or as transplants.

Part 2 of a four-part series

Two winters ago, Lynnette Bellin tore her knee while skiing with her 5-year-old daughter.

"I felt the trademark pop ... and instantly knew I had injured my knee," she says.

But within a year, she was back to her athletic life.

"Recently in one week, I skied, ran, kayaked, standup paddle-boarded, swam and hiked. At the end of that week, I looked back in awe from where I have come from," she says.

Bellin healed quickly after receiving a tendon from a cadaver, which helped to repair her torn ACL.

Her story was one of more than 100 responses that came in after NPR posted a query on its Facebook page asking if anyone had ever received a human tissue transplant. Almost every response, received in less than a day, was positive — and often glowingly so.

"I've thought of my donor often over the past year, wondering who gave me the gift of returning to my active lifestyle. I'm so thankful for this person choosing to donate their tissue," Bellin says.

She knew little about tissue donation at the time of her surgery. "When I was discussing the options with my surgeon, he casually mentioned, 'We have a whole freezer full of cadaver grafts, just let me know if you want one so I can thaw it out in time for surgery,' " she says. "I never imagined that orthopedists had freezers full of cadaver tissue."

While Bellin's surgeon was open about the use of tissue in her surgery, doctors are not required to tell patients when they use it.

Critics say that's an example of the way the human tissue business is lightly regulated.

In the United States, almost 1.5 million medical products are used each year for surgeries made with tissue taken from cadavers.

For tissue to be safe, the donor must be carefully screened. Was she a drug user? Did he have HIV? Those would rule out using that tissue. Then the tissue has to be taken from the body under sterile conditions, processed in a precise way to prevent contamination but not weaken the tissue, then stored at exact temperatures and thrown out when it reaches an expiration date.

An investigation by reporters from NPR and the International Consortium of Investigative Journalists — a network of reporters around the world — found that there's little scrutiny at key points in the tissue donation and transplant process.

But David Smith, president of the American Association of Tissue Banks, the industry trade group, disagrees with that finding.

"We are very highly regulated," he says, noting that medical advances with tissue come so quickly that regulators have a hard time keeping up or staying out of the way. "That's what we worry about. Will the regulations affect our ability to come up with new ideas?"

Smith, a forensic pathologist, says the industry has a good safety record, and he's right. Serious problems are rare. But when there is one, it's difficult to catch, and the consequences could be life-threatening.

'The Race Was On'

Last year officials at the federal Centers for Disease Control and Prevention faced a rare health emergency and had limited ability to control it.

It started when a man in Kentucky died in an ATV accident and his organs and tissue were donated for transplant.

The body parts were tested to make sure the donor was free from disease, but a lab technician misread the results.

Several months later, the organ recipients started showing symptoms for hepatitis C, which signaled that the donated organs and tissue really were diseased.

"They were diagnosed with hepatitis C. And then it was very, very important to get that word to the tissue banks and then to the hospitals and health care facilities," says Matthew Kuehnert, a doctor at the CDC whose job it is to protect donated blood, organs and tissue. Blood and organs are closely tracked, but tissue is not. 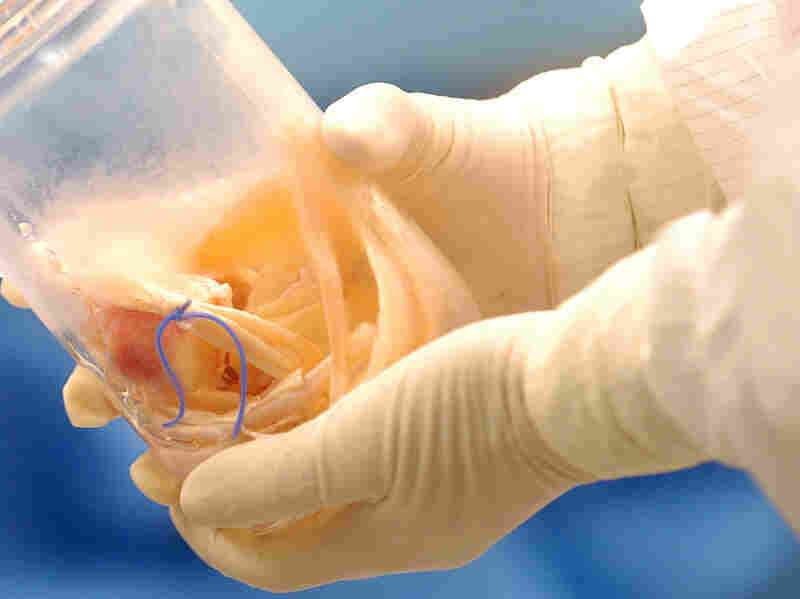 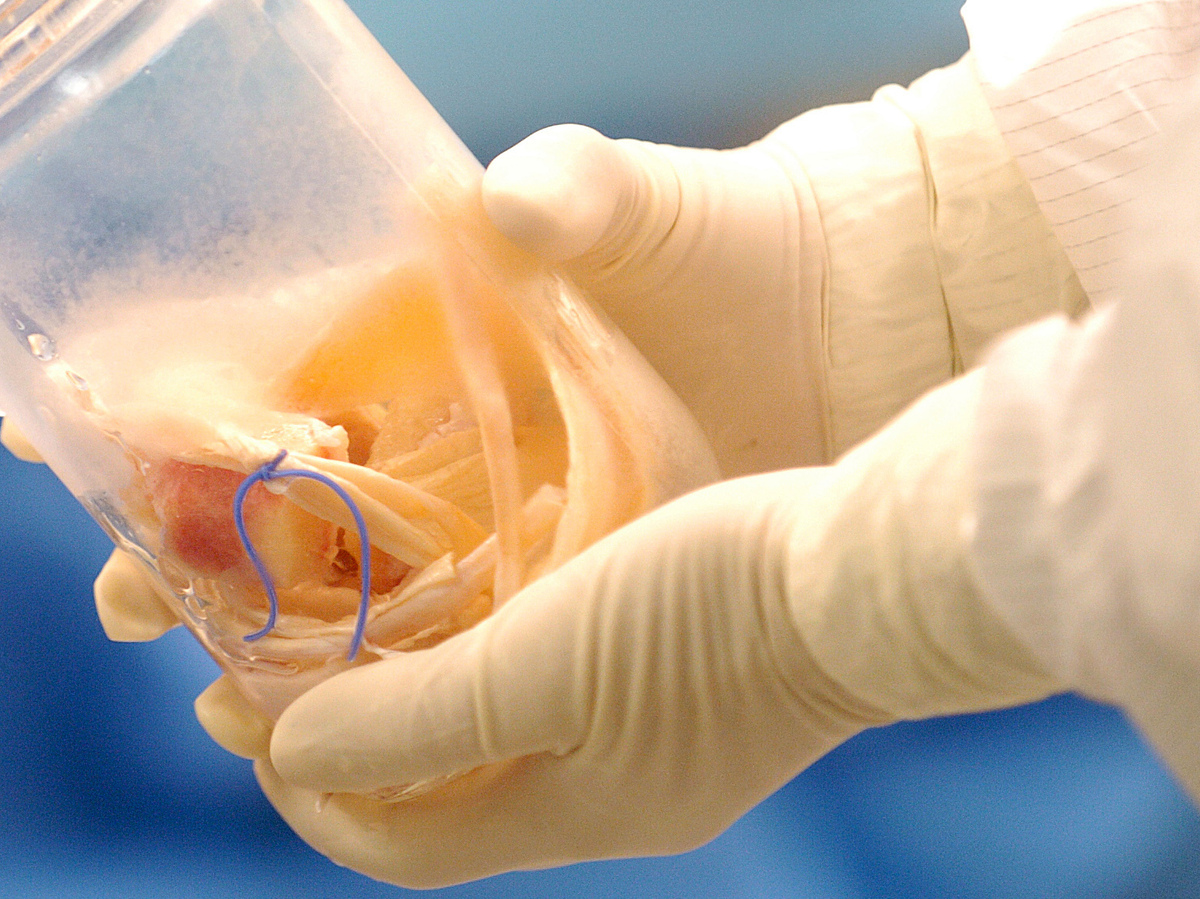 "The race was on," he says, to alert hospitals and find where the donated tissue might have gone. In this case, 44 ligaments, tendons and other donated tissue were sent to hospitals and clinics around the country. Unlike organs, which are quickly transplanted, tissue can be saved and stored for use at a much later date.

A month later, the CDC found 15 people already had been implanted, but didn't contract the disease. That's because their tissue was scrubbed with strong chemicals.

But there was one infection: A child in Boston received a heart patch, and because heart tissue can be cleaned only lightly, that child contracted hepatitis C. The child's current health condition hasn't been made public.

Kuehnert suggests the process of receiving tissue should be similar to buying cereal at the grocery store.

"It has a bar code on it, and it can be tracked back if there is some sort of problem with it in terms of quality," he says. "You can't do that with tissue right now. And that is a gap."

The CDC — largely because it can't track that tissue — has little idea how many times someone gets an infected transplant.

The primary regulator of tissue is the federal Food and Drug Administration. But it relies upon the industry to mostly police itself. If a doctor reports that a patient contracted an infection after a transplant, it is up to the tissue bank to decide whether it is a clear-cut case that needs to be reported to the FDA.

The FDA says it continues to evaluate the need for new regulations.

In 2005, the FDA started requiring tissue banks to do limited tissue tracking. But once the tissue is sold to hospitals, clinics and doctors, it is voluntary for those surgeons to report back which tissue gets transplanted into which patient.

Keeping track of tissue is even harder as the business grows global and tissue comes to the U.S. from countries around the world.

In February, security forces in Ukraine received a tip to check out a dirty minivan. Inside they found bundles of cash, human skin and body parts.

That led to a raid of a nearby morgue where agents found bone and more body parts.

The security police identified some of the body parts as belonging to Kateryna Rahulina's mother, who died last September.

Rahulina also said the consent forms were forged and that she would not have given permission to take 20 pieces of her mother's tendons and skin.

"So they showed me the documents, which say that I'm the daughter, with my signature. But it wasn't mine," she said. "I was in shock. This is vandalism. I'm just speechless."

That morgue in Ukraine was registered as a tissue bank with the FDA, which is a requirement before tissue can be brought into the United States. But officials in Ukraine and in the U.S. can't say if any of those body parts were headed to patients in the U.S.

This story was co-reported with the International Consortium of Investigative Journalists, a project of the Center for Public Integrity. Radio story produced by Sandra Bartlett; research by Barbara Van Woerkom.