Accessibility links
Can Adding Iron To Oceans Slow Global Warming? The process can cause blooms of algae that have the potential to soak up huge amounts of carbon dioxide from the atmosphere. A new study says this algae then drops to the sea floor, but some researchers caution that it's hard to track what happens to carbon in the ocean, and so-called "seeding" could have negative side effects. 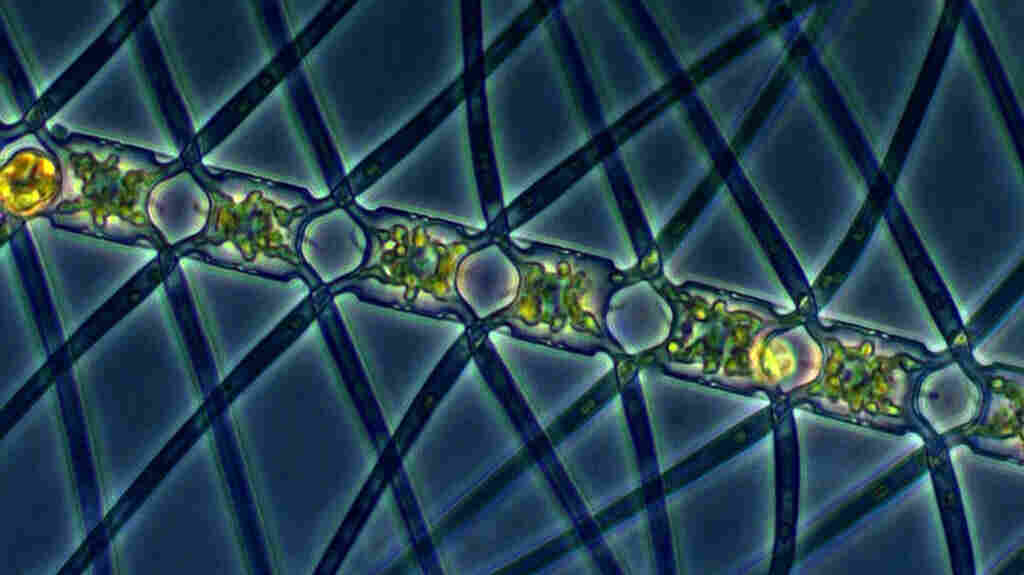 This algae, called Chaetoceros atlanticus, can bloom in the ocean when iron is added to the water. It captures carbon dioxide from the atmosphere and carries the carbon down underwater when it sinks. Marina Montresor, SZN/Alfred Wegener Institute hide caption

A noted oceanographer once quipped that if you gave him a tanker half-filled with iron, he could give you an ice age. He was only half-joking.

Adding iron to the ocean can cause blooms of algae, which have the potential to take huge amounts of carbon dioxide out of the air and by so doing, cool the planet. And a report in Nature magazine now offers some support for that idea.

The premise of this experiment is that algae growing in the oceans around Antarctica can't grow fast because it's starved of an essential nutrient: iron. Victor Smetacek at the Alfred Wegener Institute for Polar and Marine Research in Bremerhaven, Germany, says iron in the ocean is as precious as water is for plants on the land.

Thirty years ago, scientists started wondering whether they could create huge blooms of algae in the oceans by adding iron. In concept, the algae would also soak up huge amounts of carbon — carbon that's in the air and in the ocean as a result of our burning fossil fuels. Sending carbon to the sea floor could slow global warming. So Smetacek and his colleagues went to sea in 2004 to make algae blooms by adding iron to the water.

"Previous experiments showed if you added the iron you'd get a big algal bloom. But they were not able to show what happened to the bloom," he says.

Experiments In The Ocean

So on his expedition, the scientists found a place in the southern ocean where swirling currents created a natural container for their experiment. Their research vessel sprinkled iron into the water and stayed there for four weeks to measure what has happening to the algae that they had fertilized.

Within a few weeks, the algae died and clumped up like snowflakes. Those particles fell down into the deep, "and we were able to track the particles sinking out of the surface layer all the way down to the sediments." 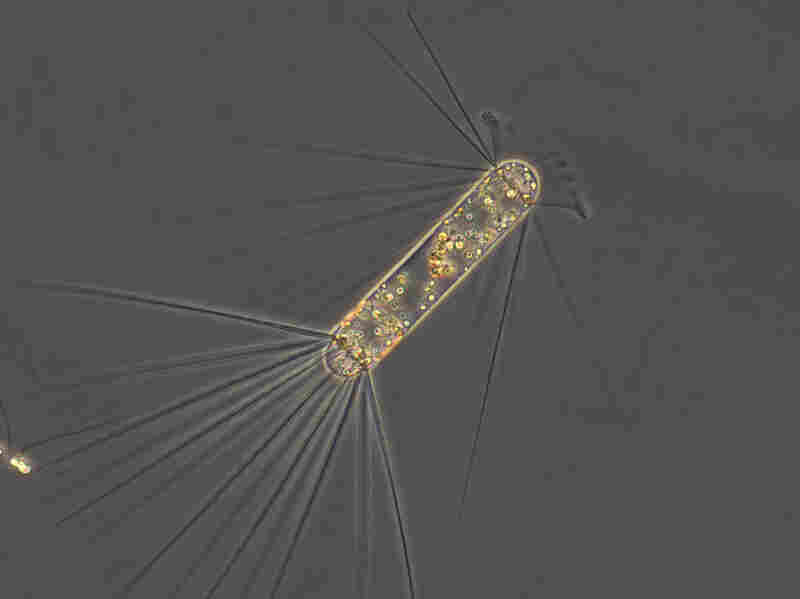 The diatom Corethron pennatum has spines like its related species Chaeotceros atlanticum and Chaeotceros dichaeta. However, this diatom consists of one cell while the other two are cell chains. Marina Montresor, SZN/Alfred Wegener Institute hide caption 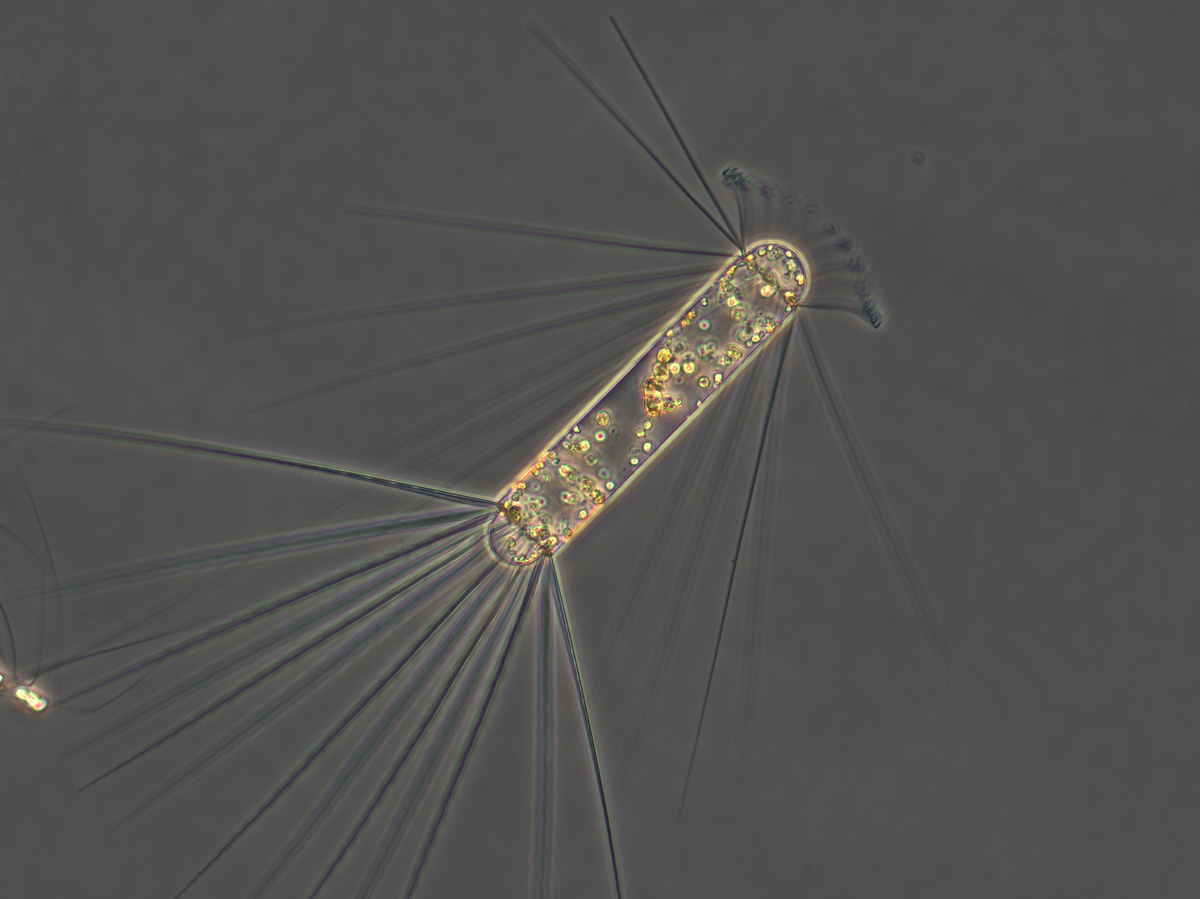 The diatom Corethron pennatum has spines like its related species Chaeotceros atlanticum and Chaeotceros dichaeta. However, this diatom consists of one cell while the other two are cell chains.

In fact, they fell rapidly through more than two miles of ocean water.

"By the time we left more than half the bloom had sunk out to the deep," Smetacek says, "and we are confident that the remaining half also sunk out, but after we had left."

Figuring out what happened took many years of analysis and calculation. But now, eight years after their experiment, the team has published its results.

They showed that adding iron really can transport substantial amounts of carbon from the surface down to the seafloor. In fact, it did so surprisingly quickly and efficiently — and apparently without harming the ecosystem.

That's an intriguing finding for people who have been eyeing iron fertilization of the oceans as a way to slow global warming. But Smetacek doesn't leap to any conclusions.

And those experiments pretty much ground to a halt a few years ago. A couple of companies swooped into this field, hoping to make money by sinking carbon and selling carbon credits. And critics started raising concerns.

"At best, this technology appears to be speculative in terms of its ability to permanently sequester carbon," says Lisa Speer at the Natural Resources Defense Council. "And at worst, it could turn out to be a disastrous experiment that could have major impacts on the ocean ecosystems that billions of people rely on for food and for employment and for life itself."

Speer says it's usually very hard to track what happens to carbon in the ocean. Adding iron can potentially trigger toxic algae blooms. There's even some research suggesting that fertilizing the ocean with iron can end up producing nitrous oxide, which is a potent greenhouse gas.

And she worries that the appeal of what seems to be an easy fix would distract people from doing all the hard work involved in reducing carbon dioxide emissions to begin with.

For the moment, that doesn't seem to be an issue — the two companies hoping to capitalize on this have folded.

Ken Buesseler at the Woods Hole Oceanographic Institution argues it's important to keep doing this kind of work, despite the understandable doubts about trying to engineer algae blooms on a grand scale to deal with global warming. He says these experiments can help explain what's going to happen to the ocean's natural ability to take carbon dioxide out of the air.

One-third of the carbon dioxide that we put into the air by burning fossil fuels ends up in the ocean. "Will that number increase or decrease as we create a warmer ocean and a more acidic ocean?" Buesseler asks. "This type of experiment helps us understand that."

New international rules are now set to allow experiments like this to go forward, but research funding is scarce.