Accessibility links
Movie Review - 'The Dark Knight Rises' - In Troubled Times, A Superhero In Our Midst The Dark Knight Rises places Batman in contemporary New York amid familiar economic and social unrest. NPR's Bob Mondello says the film is as big and loud as expected. The biggest surprise is how satisfying an end it provides to Christopher Nolan's trilogy. 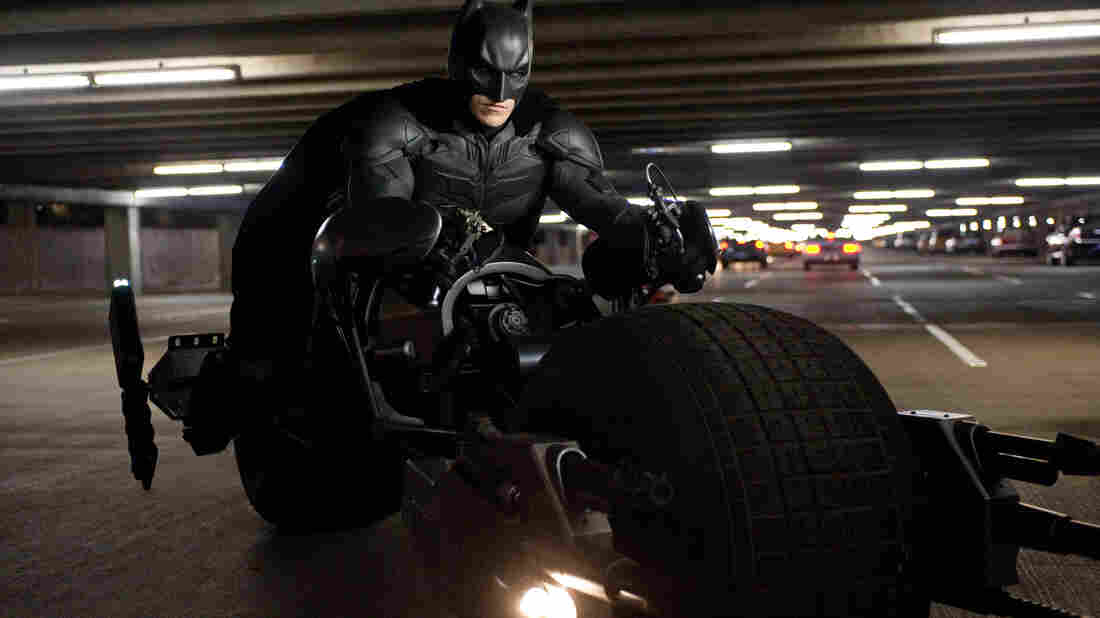 Rated PG-13 for intense sequences of violence and action, some sensuality and language

Before a hero can rise, he must suffer a fall, and fall the Dark Knight quite spectacularly did the last time around, taking the rap for crimes he didn't commit, marking himself as a vigilante pariah and even letting Heath Ledger steal the reviews. No way that's happening in this last installment. A comic-book tale that has gotten darker than anyone thought possible is now careening toward a burst of light — possibly a nuclear blast — at the end of the tunnel.

Christopher Nolan's Dark Knight trilogy has always focused on the psychology of evil, and this time the director is looking more at evil's sociological implications. Bat gizmos or no, this new movie has both feet planted firmly in the real world.

What's your poison? Terrorists? Wall Street shenanigans? Government incompetence? Nolan's got you covered. This film's bad guy trained in a Middle East hellhole, conspires with stock manipulators and exploits the mother of all police cover-ups.

Are you troubled by the social inequality making political headlines? Studio heads may identify with billionaire Bruce Wayne, but Nolan knows there are more moviegoers in the 99 percent.

"There's a storm coming, Mr. Wayne," whispers Ann Hathaway's cat burglar. "You and your friends better batten down the hatches, 'cause when it hits, you're all gonna wonder how you ever thought you could live so large, and leave so little for the rest of us." 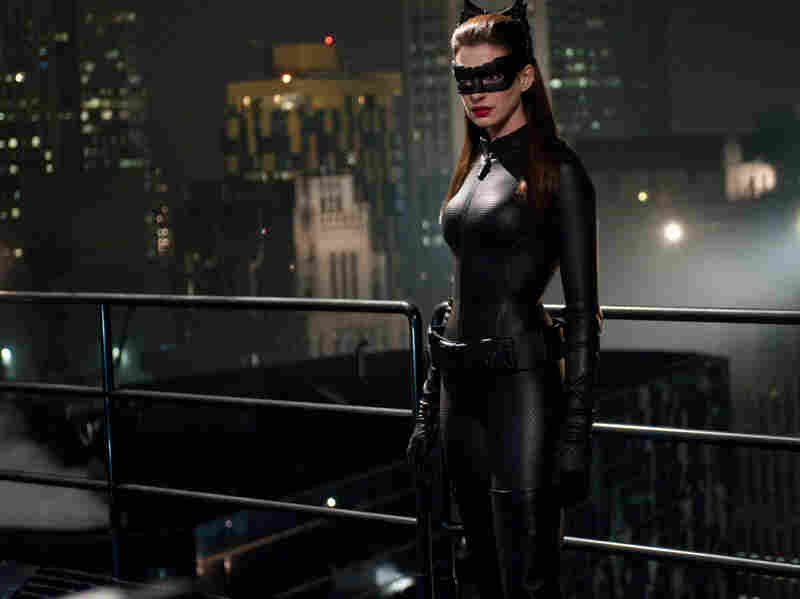 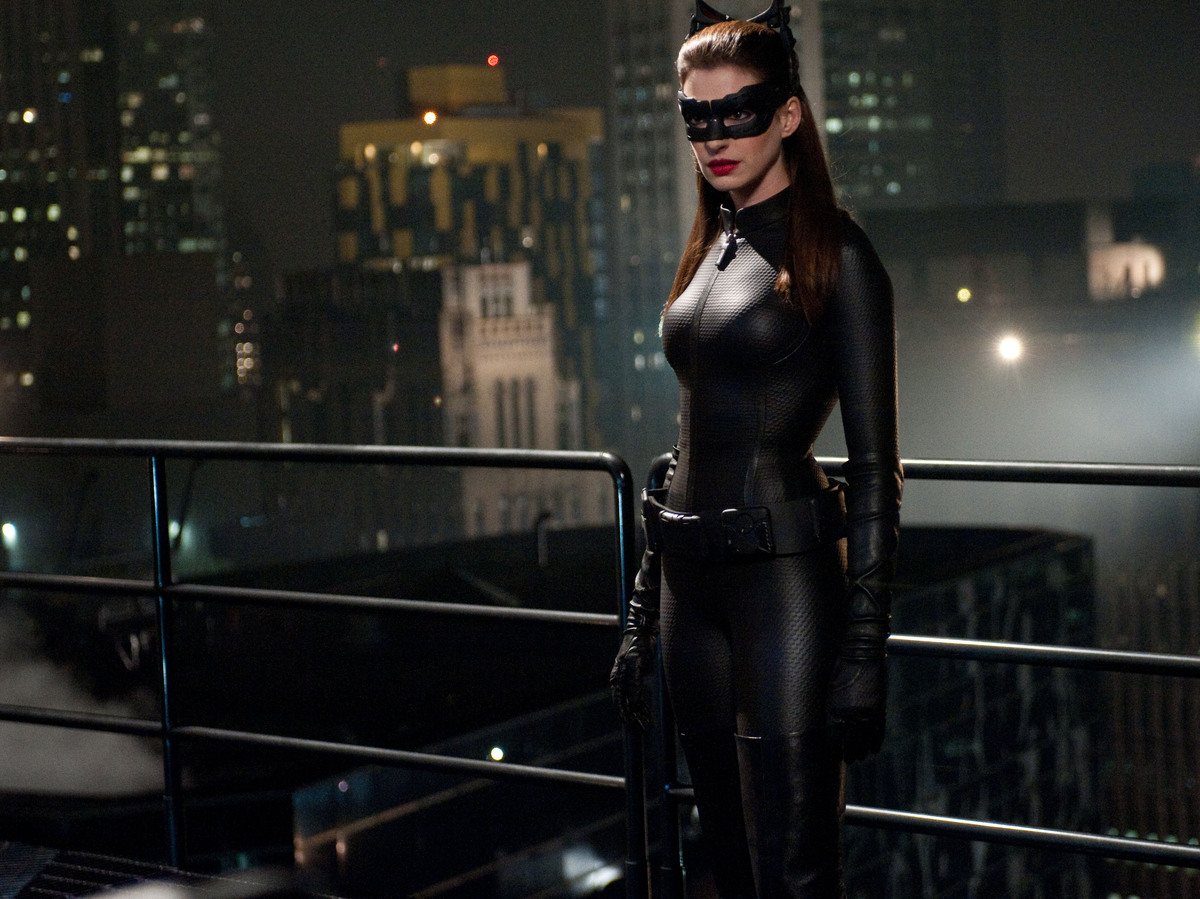 Selina Kyle, aka Catwoman (Anne Hathaway), is one of the characters proficient in Occupy-style talking points in The Dark Knight Rises.

She's not the only one who has mastered messaging. Bad guy Bane — the bane of all our existence, as played by Tom Hardy in a mouth guard that'll give fanboys orthodontist nightmares — has his anti-government rhetoric down so pat, he can make a new Bastille Day sound vaguely reasonable.

And his diabolical plans for Gotham mix other specifically Dickensian horrors with modernist ones: people's courts straight out of A Tale of Two Cities, a surveillance society on steroids, even underground tremors that will stoke fracking fears. All of it set not in the stylized Gotham of the previous movies, but in a gritty, post-Sept. 11 Manhattan, complete with a still-under-construction tower at Ground Zero. Quite a setting for super-sized superheroics.

I saw the film in 35 millimeter and did not feel deprived, though I'll certainly be heading back to catch it in IMAX at some point. Even without an image five stories tall, the spectacle is considerable, pumped up by a Hans Zimmer score so thundering that it pretty much drowns out the dialogue in some spots.

And if a couple of Morgan Freeman's bat-gizmos seem sort of standard-issue — a big-wheeled bat-cycle, for instance, that's not very interesting until it corners — he and the rest of the characters keep things plenty compelling, whether they're old friends like Michael Caine's protective butler, Alfred, or new ones, like Joseph Gordon-Levitt's earnest police officer.

As you might expect from the creator of Inception and Memento, there are surprises both in the story and in the storytelling. But the biggest surprise may just be how satisfying Nolan has made his farewell to a Dark Knight trilogy that many fans will wish he'd extend to a 10-part series, at least.