Accessibility links
Movie Review - 'Hara-Kiri: Death of a Samurai' - A Warrior's Bluff Hides A Revenge Plot In a remake of a 1960s Japanese classic, a samurai asks permission to perform suicide at the estate of a wealthy man — though in fact he's planning to avenge the death of another samurai. Critic Mark Jenkins says the film doesn't outdo the original, but holds its own at second place. 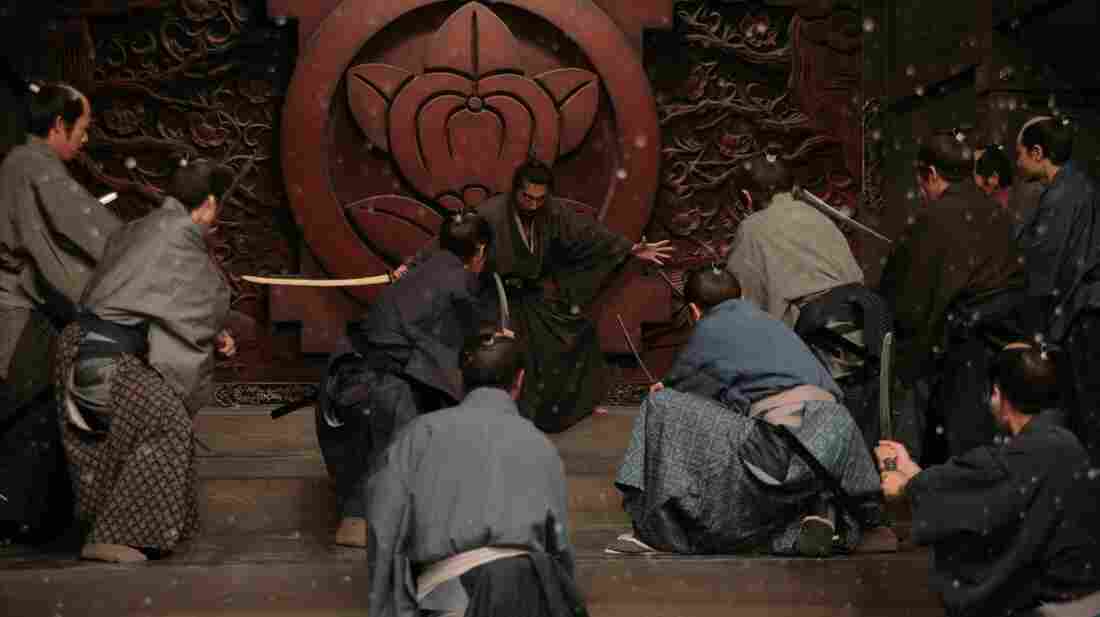 Hara-Kiri: Death of a Samurai is set in an era in which some underemployed warriors would bluff their willingness to commit ritual suicide, hoping for money or employment from wealthy families who didn't want to deal with the mess. Hanshiro's (Ebizo Ichikawa) own bluff in the film, however, goes deeper. Tribeca Film hide caption

Hara-Kiri: Death of a Samurai

In Japanese with subtitles

Japanese cinematic extremist Takashi Miike is known for movies that go too far — often because they can't figure out where else to go. So it was revealing when last year's 13 Assassins, a remake of a 1963 samurai adventure, demonstrated a traditionalist streak in Miike's tastes. But that movie is a crystal-meth freakout compared with the director's latest effort, the stately Hara-Kiri: Death of a Samurai.

This new venture is also a remake of an early-'60s film, and a more esteemed one: Masaki Kobayashi's Harakiri. Miike follows the original closely, while changing certain aspects of the story and staging. One of the most significant alterations is that the new version is available in 3-D.

The narrative, constructed via an elaborate series of flashbacks, opens in 1630. It's the Edo period, and the shogun's absolute control of Japan has ended centuries of regional wars. The peace has put many samurai out of work, but their exalted place in the caste system forbids them to accept most other kinds of employment.

Desperate for a job or at least a handout, some of these unemployed warriors attempt the "suicide bluff": They approach the estate of a wealthy clan and request permission to perform hara-kiri (more politely called seppuku) there. Sometimes, clan leaders will avoid a bloody mess by offering a less lethal, more gainful alternative.

When shabby Hanshiro (Ebizo Ichikawa) arrives at the wealthy House of Ii to request a place to kill himself, he's informed that its leaders will not tolerate bluffers. The haughty senior retainer, Kageyu (Koji Yakusho), attempts to warn Hanshiro by telling him about another supplicant.

The movie's first flashback introduces Motome (Eita), a young samurai-caste teacher who hopes to receive a few coins to pay a doctor to care for his sick wife (Hikari Mitsushima) and child. He doesn't even have a proper weapon, having sold his sword to support his family.

Kageyu shows no compassion, demanding that Motome slit his belly with the blunt bamboo sword he carries. As he labors to kill himself — a scene whose horror becomes more explicit and protracted in Miike's telling — Motome is taunted by the swordsman assigned to end his suffering with decapitation.

Hanshiro doesn't say much, but it gradually becomes clear that he already knows Motome's story. And that he has come to the Ii palace seeking vengeance. 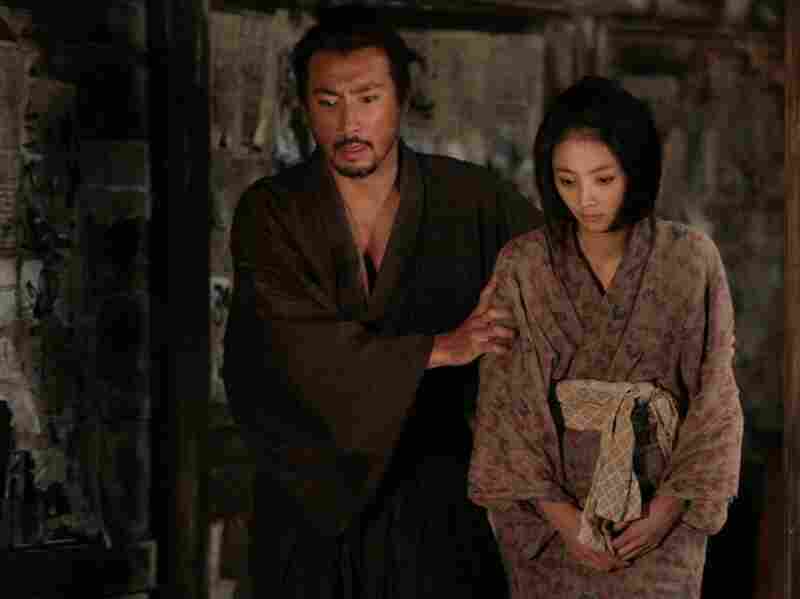 Hanshiro and Miho (Hikari Mitsushima) in one of the many flashbacks that director Takashi Miike uses to unfold the plot in Hara-Kiri: Death of a Samurai. Tribeca Film hide caption 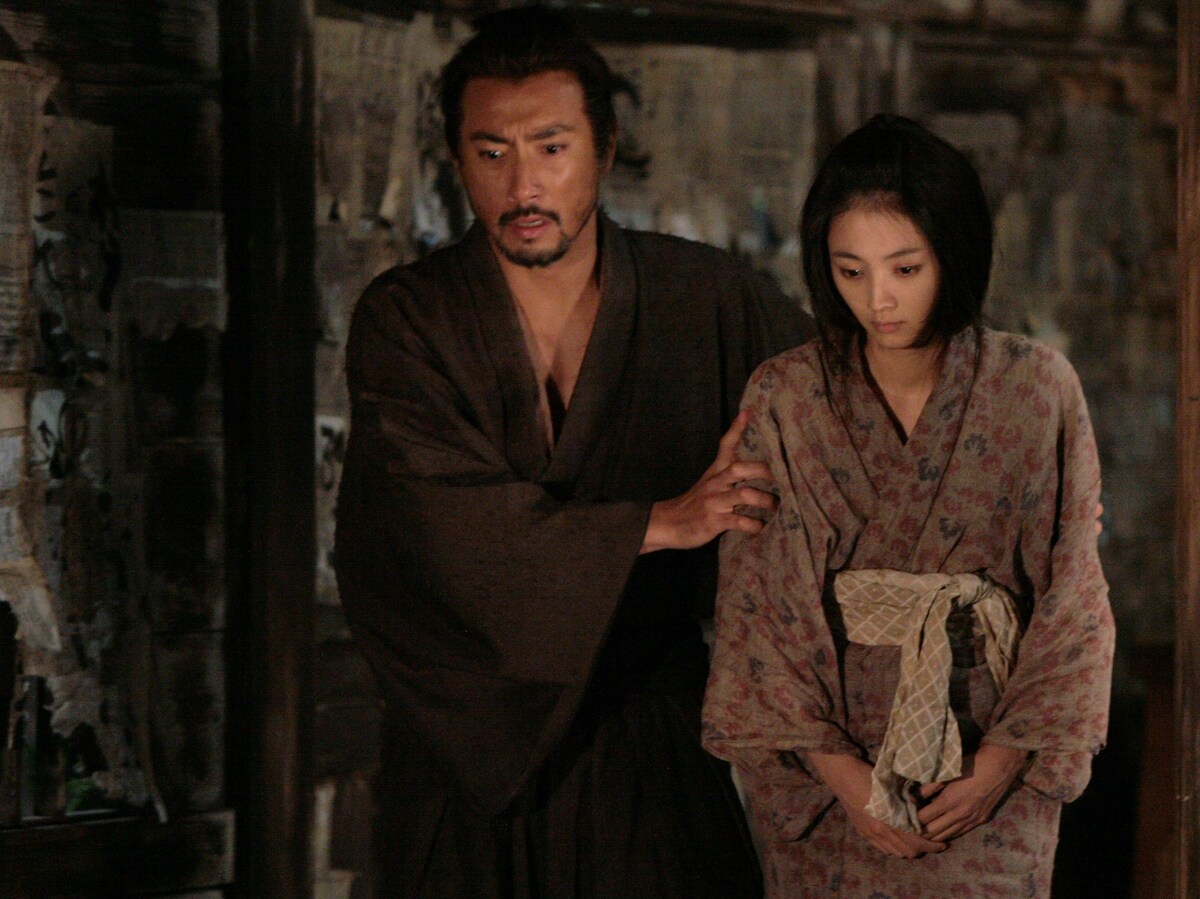 Hanshiro and Miho (Hikari Mitsushima) in one of the many flashbacks that director Takashi Miike uses to unfold the plot in Hara-Kiri: Death of a Samurai.

Hara-Kiri is formal, deliberate, leisurely almost to a fault. It features the sort of slow-gliding camera movements favored by Kenji Mizoguchi, one of the greatest 20th century Japanese filmmakers — and the one least like Miike. The director's star is a Kabuki veteran, and Miike builds the movie around the actor's gravity and finesse. The composition of the scenes set in the Ii compound even has an elegant theatricality that suggests the Kabuki stage.

Unlike in 13 Assassins, the payoff isn't disbursed in blood and action. There are two violent sequences, but both are naturalistic. And while the movie was available for preview only in 2-D, it's clear that Miike uses 3-D primarily to deepen his fastidious compositions. Visually, Hara-Kiri seems closer to Pina than to Tron: Legacy.

Despite some smart updates, Miike's drama doesn't supplant Kobayashi's. And the movie is a little longer than it needs to be, even if all that domestic back story is designed to demonstrate a basic humanity that the Ii clan lacks.

But if this Hara-Kiri is second best, it's still pretty fine. Ryuichi Sakamoto's score, Nobuyasu Kita's cinematography and the performances are all impressive. Slowly and movingly, Ichikawa's Hanshiro manifests himself as a man of subtle planning and control. For once, so does Takashi Miike.