Accessibility links
Sigourney Weaver's Stately Role In 'Political Animals' The actress plays smart, tough Secretary of State Elaine Barrish in the new USA Network miniseries Political Animals. It's another strong role for Weaver, who has starred in films like Alien, Ghostbusters and Gorillas in the Mist. 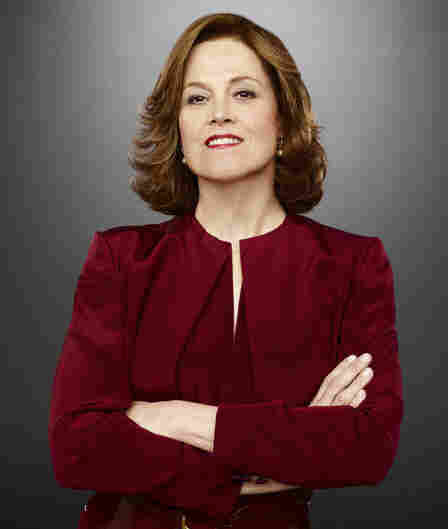 In the new USA Network miniseries Political Animals, Sigourney Weaver plays smart, tough Secretary of State Elaine Barrish. It's a role many critics have likened to current Secretary of State Hillary Clinton, but Weaver says the show's creators were thinking beyond Clinton when they devised the role.

"We've had three remarkable women who've been our secretaries of state in our last three administrations, but somehow we're not willing as a country to elect a woman president," she says. "And I think this show partially investigates what that's about."

In the series, Weaver's character accepts the president's invitation to become secretary of state after she loses the race for her party's presidential nomination. She also divorces her husband, a former president who had some serious run-ins with infidelity.

"She's got it together. And I think that's a big part of what our story tells."

It's another strong female role for Weaver, who has starred in films like Alien, Ghostbusters and Gorillas in the Mist. But there's one big difference, she says.

"Elaine is more in the mainstream, where most of the women I've played are on the edge," she says. "They're in space or they're in the mountains with the gorillas — there's something about them that's a bit off — whereas Elaine was sort of like a Girl Scout who grew up wanting to be president. ... I've never quite played a person like this. She's very solid."

On her trip to the Reagan White House in 1984

"I took the opportunity to try to speak to the president about women's reproductive rights. And that conversation was curtailed very quickly by people who removed me from him and lifted me, as I recall — forcibly but gently — away from the receiving line. And I just thought, 'That's too bad.' Because he's our president. He's my president. I may not have voted for him. I may have wanted to move to Canada when he was elected, but still, we have a right to have a dialogue about this. So on the one hand, I was very moved by being at the White House and meeting the president and first lady and seeing the welcome they had put out. But at the same time, it was kind of a farce, I thought."

"I was incredibly lucky to get that role, because it was such an excellent film. It was such a groundbreaking film in so many ways — the camerawork, the idea that a young woman would end up being a survivor — it turned everything on its head. I was incredibly fortunate. But it was not part of my career plan. I wanted to do Shakespeare, and if I had to do a movie, maybe a little Woody Allen movie. But nothing more than that."

"I think people fall all over each other to work with him again because they know he expects everything from them, as he does from himself. So the bar is so high. And the technicians and artists I know who work with Jim love working with Jim, because he's so exciting to work for and with. He has great respect for what people do."