Accessibility links
The Seamy Side Of The Human Tissue Business Body-stealing cases like that of Michael Mastromarino illustrate how an industry built on altruism can fall into the hands of the greedy.

Part 4 in a four-part series

The human tissue industry has created medical advances for millions of Americans. Tissue taken from cadavers is turned into medical products for the living. A tendon can be used to repair a torn ACL. Veins are used in heart bypass operations. Bone can be turned into plates and screws. They look like something you'd find in a hardware store, but these get used to mend a broken leg. It's a $1 billion-a-year industry that attracts the altruistic, but sometimes the greedy.

Michael Mastromarino's name may not sound familiar, but you might remember the story that made national news: Mastromarino and several funeral home directors in New York and New Jersey pleaded guilty in a scheme to take tissue from corpses — without getting a family's consent — and then selling those parts for transplant. One of those bodies was that of the late Masterpiece Theatre host, Alistair Cooke. 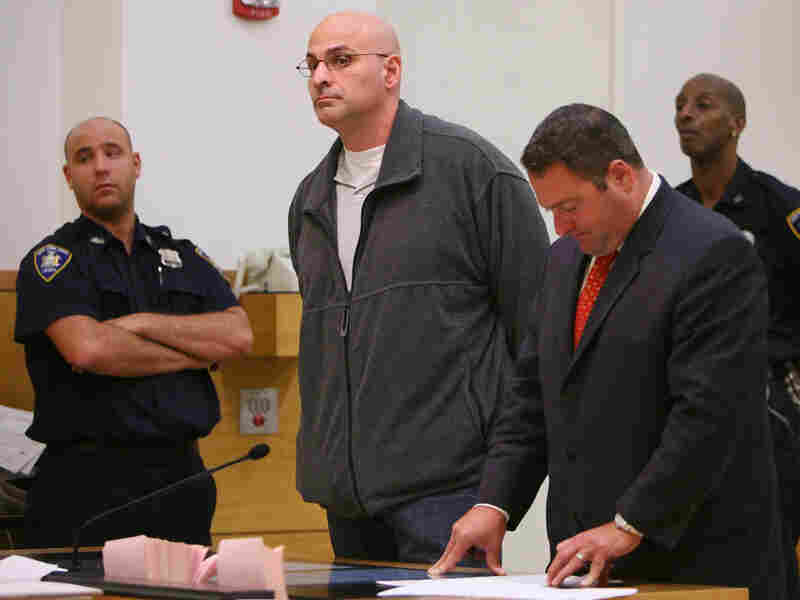 Michael Mastromarino (center) appeared in a New York City courtroom for sentencing on charges of corruption, body stealing and reckless endangerment, as the mastermind behind a scheme to loot hundreds of corpses and sell bone and tissue for transplants. Jesse Ward/AP hide caption 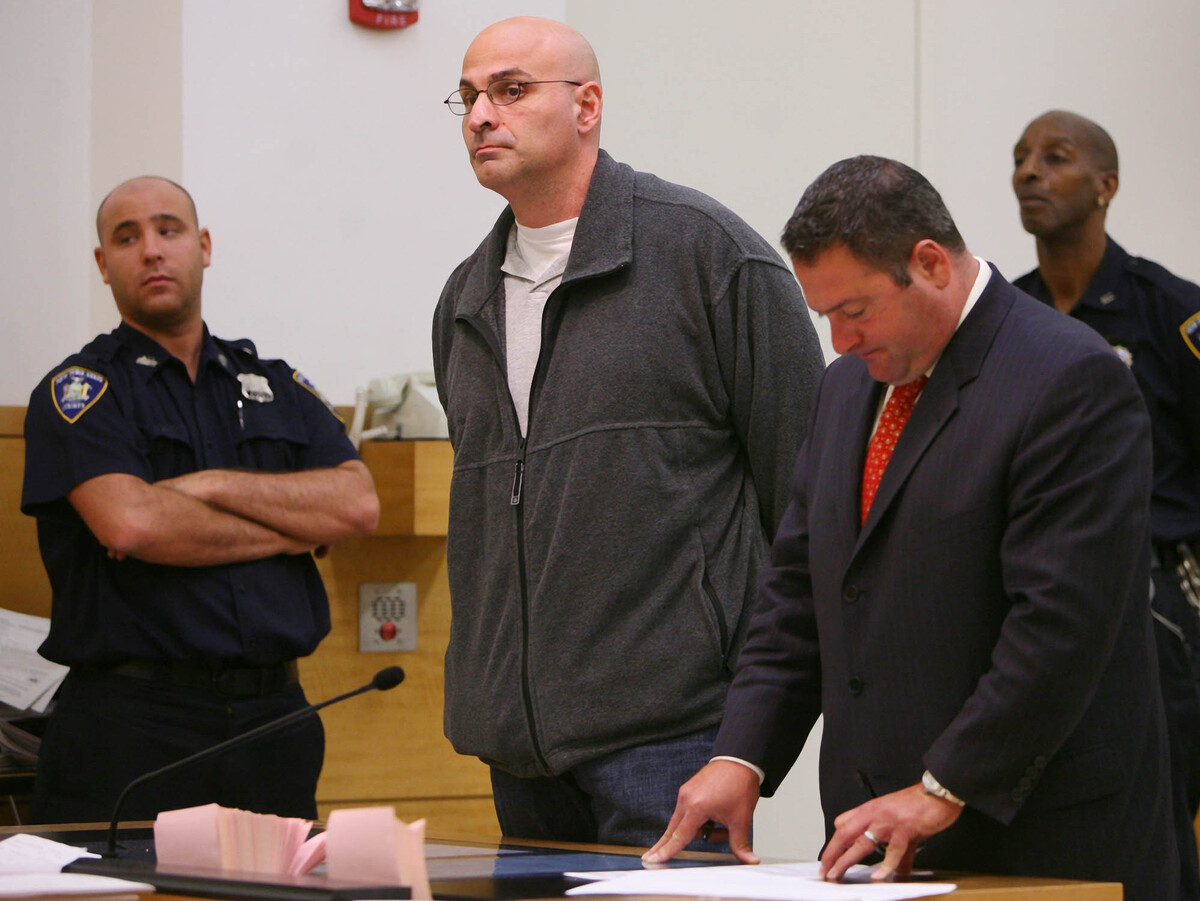 Michael Mastromarino (center) appeared in a New York City courtroom for sentencing on charges of corruption, body stealing and reckless endangerment, as the mastermind behind a scheme to loot hundreds of corpses and sell bone and tissue for transplants.

Mastromarino was the man behind that scheme. In 2008, he pleaded guilty to "body stealing" and was sentenced to up to 58 years in prison.

He was convicted of faking documents to say that families — including Cooke's — had given permission to take those body parts. He wrote down that people died of heart attacks, when the killer was cancer or some other cause that should have ruled out the use of those bodies.

Reporters from NPR, Newsday and the International Consortium of Investigative Journalists recently visited him at a prison near Buffalo, N.Y.

Right away, the tall, bald man in a green prison jumpsuit tried to argue that he was a wronged man.

"This case was completely blown out of proportion. They made me out to be, like I was doing something completely outrageous. Secret rooms ... bodies being ripped apart. I mean, that's simply not the case," he says.

Mastromarino was a dental surgeon who began working in the human tissue business after he became addicted to drugs and lost his license to practice dentistry. He lived in a New Jersey mansion with heaters under his driveway so he didn't have to shovel the snow. His ex-wife once said he made $1 million a year. He boasts it was much more.

In October, a trial is set to open in a New York courtroom. Several families of people whose tissue was taken are suing RTI Biologics, Mastromarino's largest customer, for fraud. But the company says it was a victim of Mastromarino's lies, too.

Mastromarino says his scheme went on for nearly four years before he was shut down. In the prison interview, Mastromarino blamed everyone but himself.

But he was right about one thing: "No one knows ... what tissue banking is," he said.

A lot of the things that seemed so shocking about his case turned out to be routine aspects of the business. They were surprising only because so little is known about human tissue donation.

Like when police in New York dug up some of the bodies out of their graves and found the bones had been taken, and replaced with plastic pipe.

"PVC pipe is used on an everyday basis in this industry. This isn't something like I said, 'OK, let's go to Home Depot and start doing this stuff,' " Mastromarino says.

He's right. It is standard practice to reconstruct a body with plastic pipe or wood — so the body can be viewed at a funeral.

And then there's the legal loophole.

The law is clear that you can't sell body parts. But you can take what's considered a "reasonable fee" for your work.

Unlike organ donation, where a heart or kidney goes straight from a donor to a recipient, tissue goes through many steps.

Is tissue taken from the body at the hospital, a funeral home or morgue? There's a facility fee. Is the body moved? There's a transportation fee. A procurement team takes the body parts. That's another fee. Then companies take the parts and turn them into scores of medical products.

"And no one talks about, you know, the gorilla in the room. And the gorilla is how much money everybody's making. I'm just being honest," Mastromarino says.

By industry estimates, the human tissue business makes at least $1 billion a year. All based on that first act of generosity — a family donating, free, a loved one's body.

After the Mastromarino case, the federal Food and Drug Administration, which is the main regulator of tissue banks, toughened its inspections. FDA officials said in a statement that the agency now inspects tissue banks with a record of problems every two years. Still, other banks are inspected only once every three years.

Officials in the tissue industry strongly disagree that their industry needs more regulation. For one thing, they worry that regulations will stifle medical innovation. Kevin Cmunt, an official at the tissue bank AlloSource, recently told people at a meeting of the American Association of Tissue Banks that it's their industry — sometimes more than the FDA — that has guided regulation.

"AATB has traditionally worked very closely with FDA, and in many cases led the FDA in regulatory requirements," Cmunt told a panel during the trade group's spring meeting in Puerto Rico.

Cmunt said tissue companies know they rely upon the public's trust for donations, so they're more willing to work with regulators. They want to avoid the rare bad actor like Mastromarino.

'There's Too Much Money There'

But over the past several months, a story has unfolded in Birmingham, Ala., that has also mixed medicine with greed — and cadavers.

Last September, two former executives of the Alabama Organ Center were charged with health care fraud and mail fraud. They are accused of receiving about $500,000 in kickbacks from a funeral home that did business with the organ center.

There are too much temptations. ... And when there's money and unregulation, there's opportunities for good people to do wrong things.

Demosthenes Lalisan and Alan Hicks ran the only place in Alabama that is approved by the federal government to make sure that scarce organs are allocated — fairly and safely — to people who need transplants.

The foundation that runs the organ center says the men did not jeopardize organ transplants. But it wasn't the organs that got the two men in trouble; it was the tissue.

The two men gave a funeral home a contract to be the one place where tissue was taken from corpses. It made business sense: It would save money for the center to take bodies to one centralized place that was easy to keep sterile and where they could maintain the tools and equipment needed to recover tissue. But then Lalisan and Hicks demanded kickbacks.

The scheme lasted from 2003 until last summer when the FBI, not the FDA, caught them.

"And [Hicks] believes that this industry should be regulated. There are too many, too many loopholes. There are too much temptations, there's too much money there," he says. "And when there's money and unregulation, there's opportunities for good people to do wrong things."

Now, it's easy to say "the lack of regulations made me do it," but in 2007, there was an effort in Congress to toughen regulations.

"The bottom line here is: What we saw happen in the Brooklyn funeral home could well be happening in lots of other places," says Sen. Charles Schumer, D. N.Y., who in response to the Mastromarino scandal wrote the Senate bill. "There's no real protection."

Schumer's bill would have required the FDA to do more frequent inspections of tissue banks. And it tried to more clearly define those "reasonable fees" — how much money could, or couldn't, be made off human tissue.

The bill died quickly. Schumer says he blames lobbying by the tissue industry.

NPR's Sandra Bartlett and Barbara Van Woerkom contributed to this report. This project was co-reported with help from the International Consortium of Investigative Journalists, a project of the Center for Public Integrity.