Accessibility links
MSNBC Gets Academic: Meet Host Prof. Harris-Perry The newly anointed cable host is a full-time political science professor at Tulane University. Melissa Harris-Perry says she refuses to check the weekly ratings of her show, but she knows she's being watched by more people than she could reach in a lecture hall. 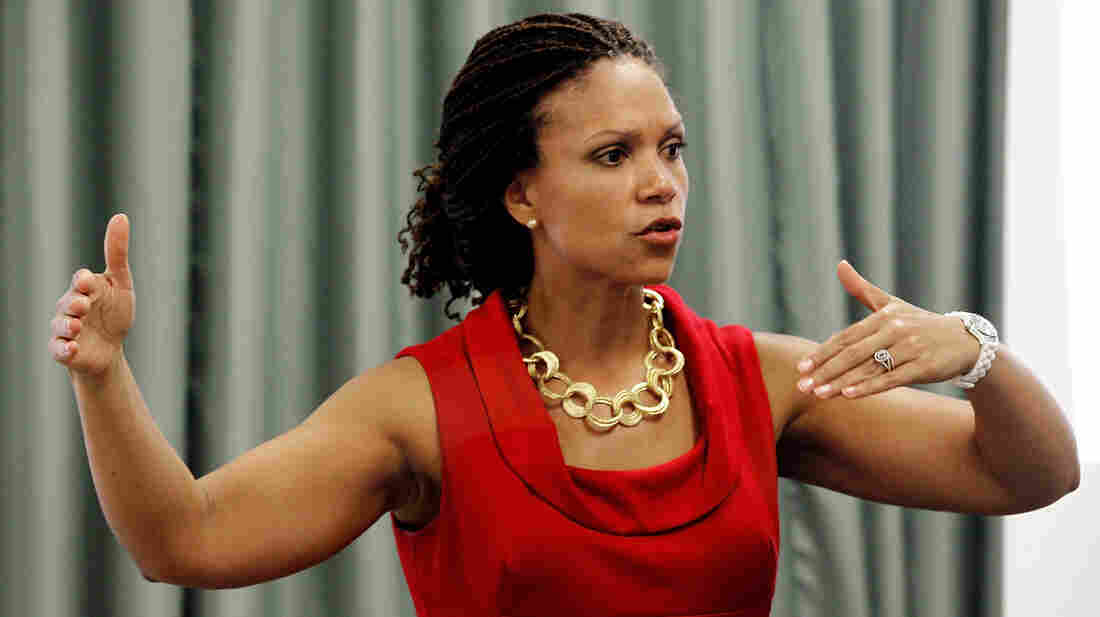 Cable news channels tend to treat intellectuals gingerly — as fragile curiosities or as targets for ridicule — when they appear at all.

Not MSNBC's Melissa Harris-Perry. This newly anointed cable host commutes 1,300 miles each week for her eponymous program of opinionated conversation, interviews and essays that runs live for two hours each Saturday and Sunday morning.

In her daily life, Harris-Perry is a full-time political science professor at Tulane University in New Orleans, where she is the founding director of the Anna Julia Cooper Project on Gender, Race and Politics in the South.

Probably my biggest angst about being an academic is that question of whether or not it makes a difference beyond just your students in the classroom.

"Probably my biggest angst about being an academic is that question of whether or not it makes a difference beyond just your students in the classroom," Harris-Perry says during a recent interview at her offices at NBC's headquarters in Rockefeller Center.

And yet when MSNBC executives suggested that she graduate from commentator to host, she says, she couldn't pass up "the opportunity to have a public forum the year in which we either will — or will not — re-elect America's first black president."

She comes by her angst honestly. Her father was a dean at the University of Virginia but her mother left her job as a community college professor to become a community activist.

Harris-Perry, who left Princeton for Tulane in 2010, is not unknown to the media: She contributes columns to the liberal Nation magazine and has appeared in recent years as an analyst on left-leaning MSNBC.

While Harris-Perry says she refuses to check on her weekly ratings — her audiences are markedly bigger than can cram into any lecture hall. Yet her academic work comes first, she says, and she is working on yet another book.

"I could have said no to it if it were an 8 o'clock [weeknight] show," Harris says, "but there's no way I could say no to it on the weekends."

The legacy of President Obama is personal for Harris-Perry, whose father is black. She self-identifies as black, too. But her mother, who is white, was raised an observant member of The Church of Jesus Christ of Latter-day Saints — like Republican presidential candidate Mitt Romney.

Harris-Perry says she's fascinated by that part of the American experience as well: "maybe more than anything, in part because my people were Mormon pioneers."

She says an ancestor was imprisoned for polygamy, and cites the repression and rejection Mormons frequently faced.

Despite the way in which Romney is often publicly characterized, Harris-Perry says, "Mormon people are not elitists! Mormon people were ejected because of their identity."

MSNBC President Phil Griffin has been shaping a more explicitly left-of-center lineup, with a special exception for the eclectic mix on Morning Joe co-hosted by former Republican congressman Joe Scarborough. Over the past year, he's dropped some of the true-crime news magazine re-runs for the weekends and replaced them with a show hosted by Nation magazine editor at large Chris Hayes.

He, too, focuses on politics and policy with a left-of-center outlook.

"I think the passionate host is winning because there are so many different outlets today — that to break through the clutter you can't be cold and arm's length," Griffin says. "You've got to love what you're talking about. You've got to make it exciting and interesting.

"In a 140-character Twitter world, the rebound is depth. People yearn for depth," Griffin says, "and Melissa — you know — is an academic. That's what they do."

Because she's used to being in the front of the class, I think her delivery on cable is that of an authority. She addresses the audience, often as someone who knows what she's talking about — and should, because she's the teacher.

College professors have become familiar sights on television news, particularly as cable producers and bookers have to fill airtime. Think of Larry Sabato of the University of Virginia, a frequent guest on Fox News. And it can go in the other direction, where the expertise of CNN's medical correspondent, Sanjay Gupta, also translates into his role at Emory, where he is an assistant professor of neurosurgery. (And yes, that does mean he is a brain surgeon.) But few academics make that turn to become the host rather than the expert.

"Because she's used to being in the front of the class, I think her delivery on cable is that of an authority," Potter says. "She addresses the audience, often as someone who knows what she's talking about — and should, because she's the teacher."

But Potter notes that Harris-Perry was groomed much like other MSNBC hosts, including Rachel Maddow, Lawrence O'Donnell and Hayes. First, she was a commentator — then a paid contributor and swiftly given her own show.

The program takes on the tenor of the scholar's beliefs and prolific writings.

The Sunday before July 4, Harris-Perry offered viewers this essay on the nature of how freedom was won for — and in — the United States.

"Our founding is an unlikely narrative of young men, so inspired by an age of ideas that they threw off the yoke of colonialism and founded a free nation — men who were embarrassingly imperfect," she said. "The land on which they formed this union was stolen. The hands with which they built this nation were enslaved. The women who birthed the citizens of the nation are second class."

She argued that the twin legacies are shared by all Americans, the oppression right along with the idealism. That stirred the top-rated figure in cable news, Bill O'Reilly of Fox News, who made a distinction between Harris-Perry and most liberals.

"Liberal people tend to want the government to solve problems to make the country a more humane place," he told viewers. "But far-left Americans often don't like the country."

O'Reilly conceded quite bluntly that Harris-Perry was right about the facts, and his colleague, Gretchen Carlson, said all schoolchildren should be taught those lessons. But O'Reilly contended Harris-Perry's timing, just before Independence Day, betrayed her true intent: "The far left in America, which is entirely what watches that, they hate the country. ...They want to break it down and build up a totally new America."

"Even on the Fourth of July?" a more measured Carlson asked.

"Yes," O'Reilly replied. "On Christmas, on Halloween, on any day."

Harris-Perry argues O'Reilly has it exactly wrong. It is fundamentally American, she says, to use free speech to acknowledge the country's shortcomings.

Aside from having her own soapbox to do so, Harris-Perry says she has little but ego at stake. She says her primary career still lies on campus, at Tulane — almost as though to underscore the point, she just bought a fixer-upper in a Katrina-scarred section of New Orleans with her husband.

"Ten years from now, being able to look back and say I, you know, did a good job will be if there are a lot more little black girls anchoring shows," Harris-Perry says. "All different kinds of shows — right? Not just liberal talk shows or whatever we are.