Accessibility links
The Nation: Syria Descends Into Civil War As the violence in Syria goes from bad to worse, The Nation's Robert Dreyfuss investigates how we got to this point and says Washington needs to be more open to negotiate with unsavory powers if a political solution will ever be possible. 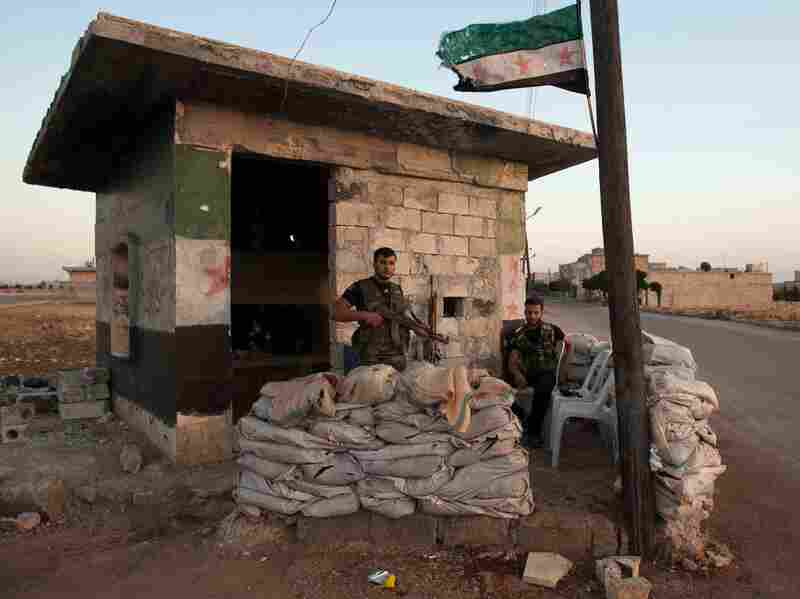 Members of the Free Syria Army stand guard at an outpost on the outskirt of Mareh, near Aleppo in northern Syria, on June 27. Vedat Xhymshiti/AFP/Getty Images hide caption 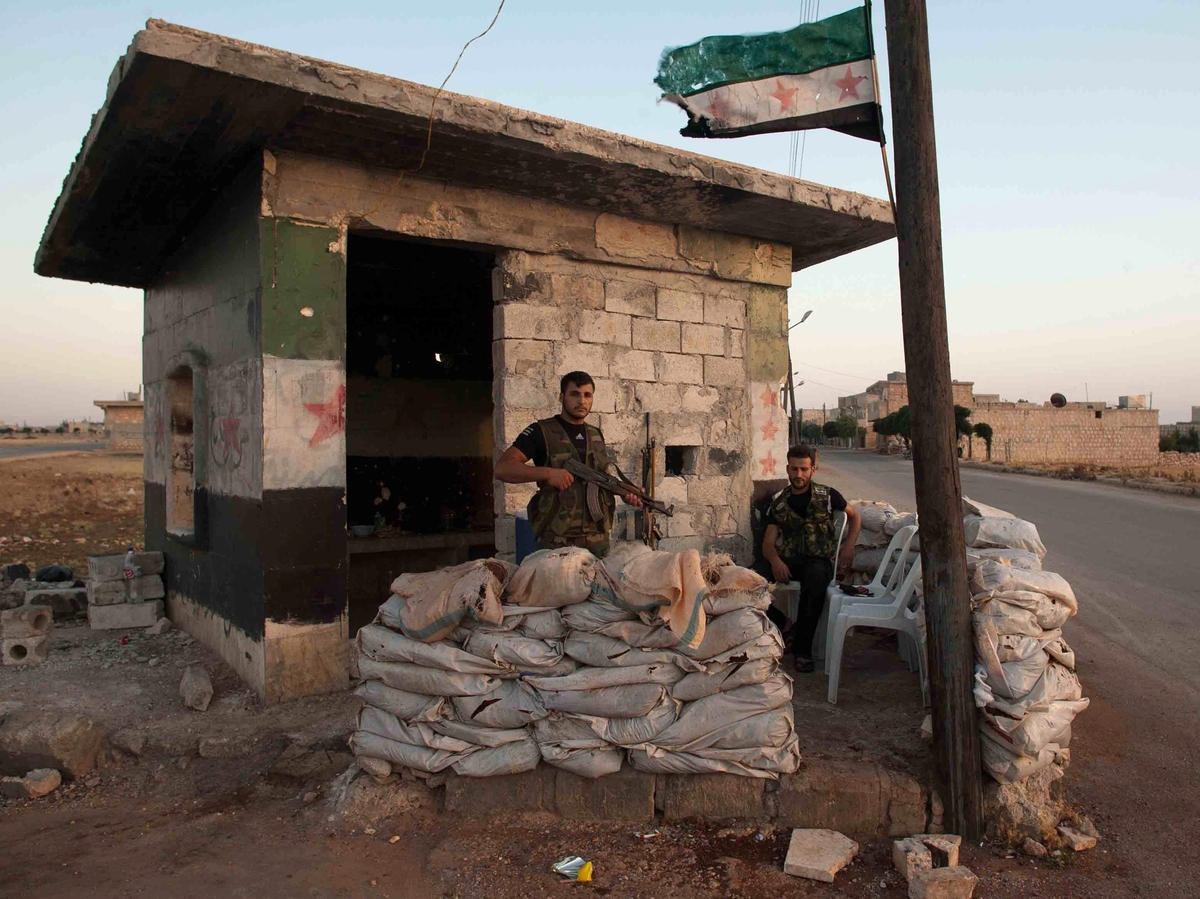 Members of the Free Syria Army stand guard at an outpost on the outskirt of Mareh, near Aleppo in northern Syria, on June 27.

Read Another Opinion On The Syrian Conflict

Robert Dreyfuss is a contributing editor for The Nation.

The crisis in Syria is getting worse, and then worse.

Perhaps it's too late to ask the question, How did we get here? Whatever the case, the struggle for political power in Syria is probably something that will be decided by guns, not diplomats. I don't know if odds-makers in Las Vegas are taking bets on it, but I'd say that the chance that President Assad is still in power one year from now have dropped to about 10–20 percent; far more likely, at some point in the next months, the Syrian government and its armed forces will disintegrate. And then what? Well, that's anyone's guess.

According to some reports, Assad is already fleeing the capital, Damascus, for Latakia, a port city in the northwest, though Syrian media have shown images of Assad. That follows a bombing that killed several top officials, including the minister of defense and Assad's brother-in-law. Lots of questions revolve around whether or not the Syrian military will hold together. It might already be the beginning of the end. There are widespread reports of fighting in Damascus, and as Syria pulls troops back from the Golan Heights and other far-flung areas, the rebels are seizing border posts near Iraq and Turkey.

The Obama administration deserves a little credit, and a lot of blame, for the civil war that's unfolding in all its ugliness now. Credit, because President Obama has rebuffed war cries from hawks, neoconservatives, the Wall Street Journal and liberal interventionists alike to intervene directly, say, by using ground forces or air strikes, setting up no-fly zones, creating safe zones in Turkey protected by U.S. troops to shelter Syrian rebels or shipping lethal weapons en masse to the anti-Assad forces. All of that, and more, has been proposed almost from the start of the struggle in Syria, and Obama has rejected it.

But Obama deserves a lot of blame, too. Let's leave aside, for a moment, the question of whether or not the United States is already intervening in Syria covertly, through the CIA and the Pentagon's ever-expanding black-ops units. It's already been reported that the CIA is helping to coordinate the supply of some weapons to the fighters in Syria, and on the ground CIA officers are reportedly deciding which rebel units deserve support and which ones don't, presumably trying to make sure that Al Qaeda and its ilk doesn't get Western help. That sort of support is bad enough, and where there's smoke there's firefights: we'll learn, I'm sure, after the fact that the CIA and Co. were more deeply involved in the Syrian crisis than we've been told thus far.

No, the real problem with the Obama administration is that never, since the start of the crisis in Syria, did Washington truly seek a political solution. From the start, nearly a year and a half ago, the United States wholeheartedly joined in what has become an exercise in regime change, Obama-style. No, it's not George W. Bush going in with guns blazing. But as the Arab Spring toppled pro-American dictators in Egypt and Tunisia, and threatened pro-American kleptocrats in Bahrain, the Obama administration seethed over the fact that initially, at least, Syria seemed stable enough. But as the protests grew, the Obama administration decided that getting rid of Assad would weaken Hezbollah in Lebanon, confuse Hamas in Palestine, and stick a finger in the eye of Iran, one of Syria's few allies. With an increasingly shrill tone, the administration denounced Assad, called him a thug, demanded he leave power, and — most importantly — gave short shrift to the idea that Assad might reach a political accord with the rebel forces, at least with some of the more establishment-minded Syrian opposition groups, on some sort of step-wise transition. That's what happened in Yemen, pretty much, where the United States had lots of leverage. Problem is, in Syria, the United States would have to depend on getting Russia and Iran to play the role the United States and Saudi Arabia played, respectively, in Yemen. And Washington wasn't interested.

When various analysts suggested that Vladimir Putin might accept a resolution in Syria that preserves, at least superficially, Russian interests, the Obama administration didn't bite. (In fact, Russia doesn't have a lot of real, national interest in Syria, but the loss of Syria — coming so soon after the fall of Libya to NATO — would rile up Russian nationalists against Putin, were he to go along.) When analysts suggested that Iran might play a role in a transition in Syria, perhaps by participating in the United Nations mediation effort led by Kofi Annan, the United States blocked that, too. And of course, by calling for Assad's head unequivocally from the start, the United States emboldened the rebels, who quite logically may have expected far more American support than they've gotten so far.

No one outside Syria knows who the rebels are. The outside groups, such as the Syrian National Council and other self-styled spokesmen, have unclear ties to the forces on the ground. The Syrian Muslim Brotherhood is a major player, both inside and out. And the Muslim Brotherhood has been battling Assad at least since the 1970s, when it carried out a series of assassinations and bombings against the government of Hafez Assad, Bashar Assad's late father. Many quick-study Syria experts point to the brutal put-down of the Brotherhood-led rebellion in Hama in 1982. But the Muslim Brotherhood's war against Assad had long been raging even before that, including a horrific incident in June 1979, when the Muslim Brotherhood gang attacked a military school in Aleppo, Syria, and butchered eighty-three cadets, In November 1981, a massive car bomb linked to Islamist rebels killed 200 people in Damascus. During this period, the Muslim Brotherhood in Syria had covert support from Israel and from Israel's agents in Lebanon, including the infamous Major Saad Haddad, a Lebanese military officer recruited as an Israeli pawn in south Lebanon.

There's a long, sordid history on both sides of this conflict, and now it's coming to a head.

The Russian and Chinese veto of what's called a "Western-backed U.N. resolution" on Thursday could mark the very end of diplomacy in regard to Syria. On the other hand, if the administration learns the lesson that it needs to work with Moscow and Beijing (and Tehran) on Syria, then the veto could be the start of a real, international effort to find a political solution. The British ambassador to the UN seems to think it's the former: "The consequence of their decision is obvious. Further bloodshed, and the likelihood of descent into all-out civil war."