Accessibility links
'Dark Knight' Events Canceled, Theaters Add Guards The Dark Knight Rises was expected to produce a blockbuster weekend. Now the atmosphere is somber and Hollywood insiders are concerned the industry will be accused of inciting violence. 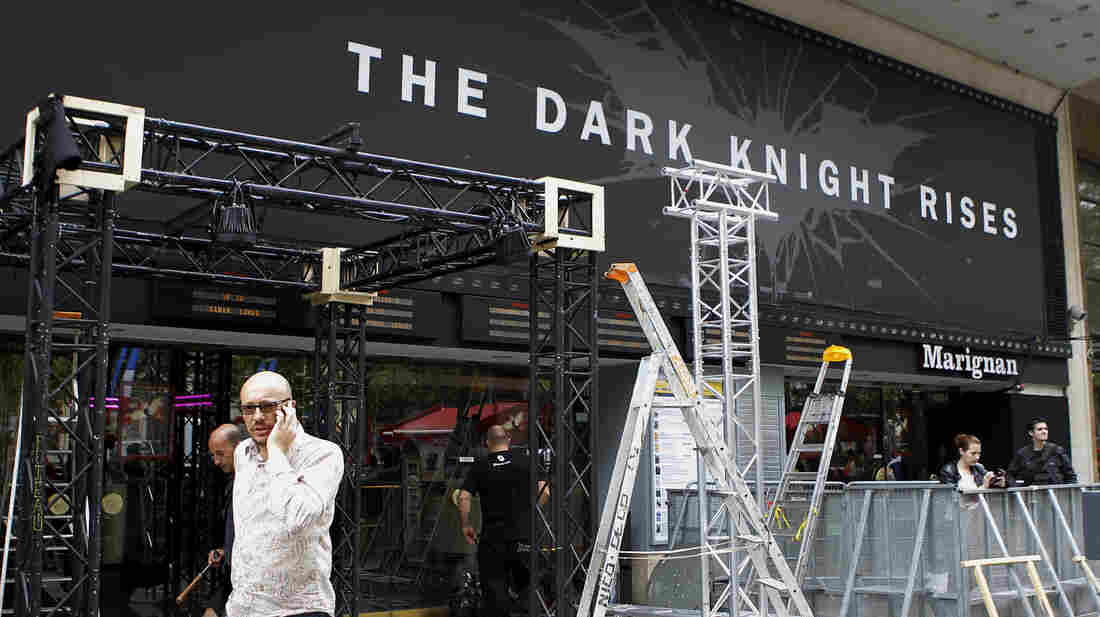 Workers dismantle an installation that was set up for the premiere of The Dark Knight Rises in Paris. It had been scheduled for Friday night but was canceled after a gunman killed 12 people at a Colorado opening of the same film. Jacques Brinon/AP hide caption 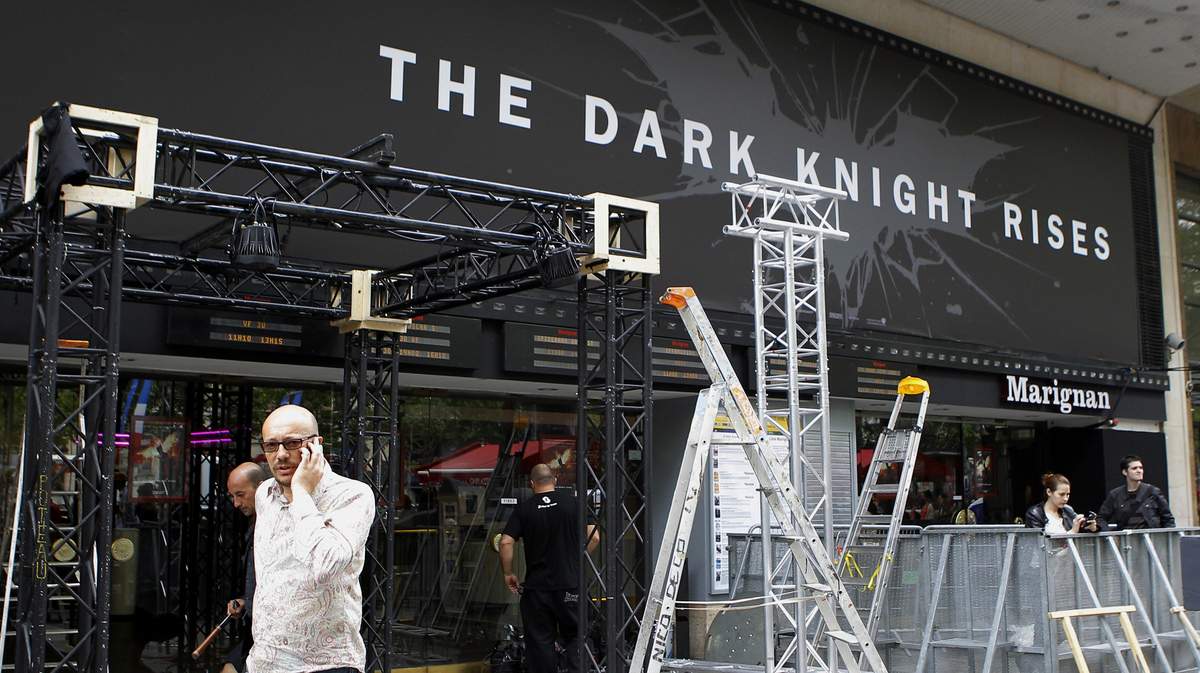 Workers dismantle an installation that was set up for the premiere of The Dark Knight Rises in Paris. It had been scheduled for Friday night but was canceled after a gunman killed 12 people at a Colorado opening of the same film.

In the aftermath of the mass shooting in a Colorado theater, the hoopla surrounding a blockbuster movie opening was toned down, and theaters around the country began beefing up security.

Warner Bros., the studio behind The Dark Knight Rises, canceled Friday night's red-carpet premiere in Paris. It also called off a press conference with the director and the stars.

The studio issued a statement extending sympathies to the families and loved ones of the victims of the shooting in Aurora, Colo. There were similar condolences from the Motion Pictures Association of America and the National Association of Theater Owners.

Those who work in Hollywood were also wondering what this could mean for the movie business.

The newest Batman film is the finale to a trilogy of Dark Knight movies.

"It's a dark movie, and it prides itself on being a dark series, and it's very successful partly for that reason," says Sharon Waxman, editor-in-chief of the Hollywood website TheWrap.com.

She notes that actor Heath Ledger died of a accidental prescription drug overdose after he played the role of The Joker in the first Dark Knight film.

Waxman says Hollywood is now shocked by this latest tragedy, and also worried that people might accuse the movie industry of inciting violence. "I think there will be a layer of apprehension around whether there's going to be some dots connected between that and what inspired this 24-year-old man to open fire in a theater," she says.

The newest Batman film was hoping to pull in somewhere around $200 million at the box office in the U.S. over this opening weekend, not to mention profits from an additional 4,000 screens worldwide.

"Before this happened, it was projected to be the biggest opening for a non-3-D movie in history," Waxman says.

Waxman says it's too soon to know how much the film might lose at the box office this opening weekend. Warner Bros. reported that Thursday night's midnight screenings grossed $30.6 million.

Some movie theaters are beefing up security with local police officers. AMC Theatres is banning moviegoers from wearing masks and carrying fake weapons.

The trailer features a scene of mobsters opening fire in a movie theater. It's not an the image the studio or audiences want to be reminded of on this day.