Accessibility links
Know Your HIV Status? D.C.'s Asking Washington, D.C., has the highest rate of HIV infection in the nation. A key initiative in the battle to contain the epidemic is encouraging people to get tested. From the grocery store to the nightclub, community health workers are pushing the conversation with on-the-spot test results.

Washington, D.C., has the highest rate of HIV infection in the nation, almost 3 percent. It's considered an epidemic. Health officials believe one way to halt the spread of the disease is to encourage people to get tested and "know their status." They hope this will encourage residents to seek treatment and reduce the chances of them passing on the virus.

Juan Carlos Loubriel and Amie Krautwurst are setting up a table outside their large HIV testing van. They work for Whitman-Walker Health, a community health center in D.C. Using their van, they do approximately 2,000 HIV tests a year outside nightclubs, homeless shelters and even grocery stores.

"Approximately one in 20 people in Washington, D.C., is living with HIV, and within that percentage, about 20 to 40 percent don't know that they are HIV positive," Krautwurst says.

Loubriel says testing with the van is convenient.

"'Let me do it before I go to the grocery store, I pick up my groceries, and I finish and get my results," he says.

It's part of an effort to "de-stigmatize" HIV testing. Millard Moore and his fiancee Myrna Treminio were on their way to the grocery store when they decide to stop by the van and get tested. Though initially nervous, after 20 minutes they find out they're negative and leave holding hands, feeling good about themselves.

Walter Smith, who heads the advocacy group D.C. Appleseed, says things are much better coordinated than they were just a few years ago.

"There was almost no education in the schools, very little in the way of promoting testing, nothing like the condom distribution program that we have today. All of those things are basic pieces," he says. 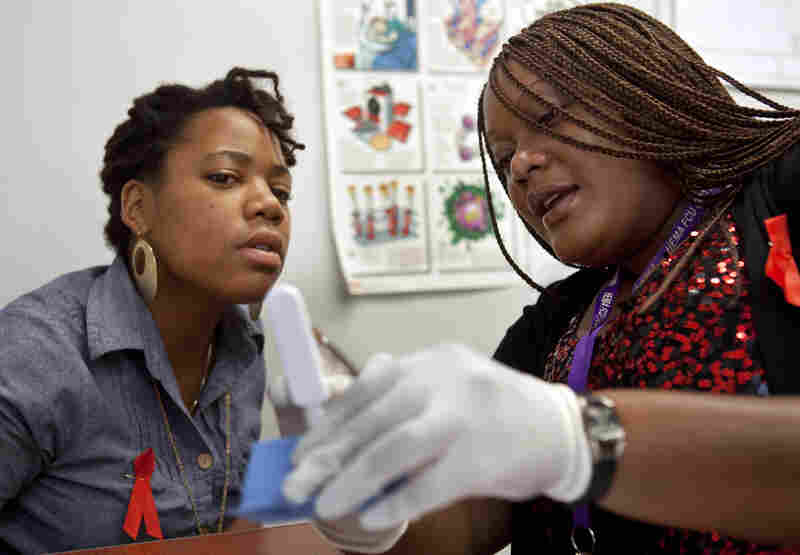 HIV counselor Natrussa Williams explains the results of the oral HIV test to Katherine Tapp at the D.C. Department of Motor Vehicles in southeast Washington. There have been no babies born with HIV in the city since 2009, in part because of increased testing at locations including some high schools and the DMV. Jacquelyn Martin/AP hide caption 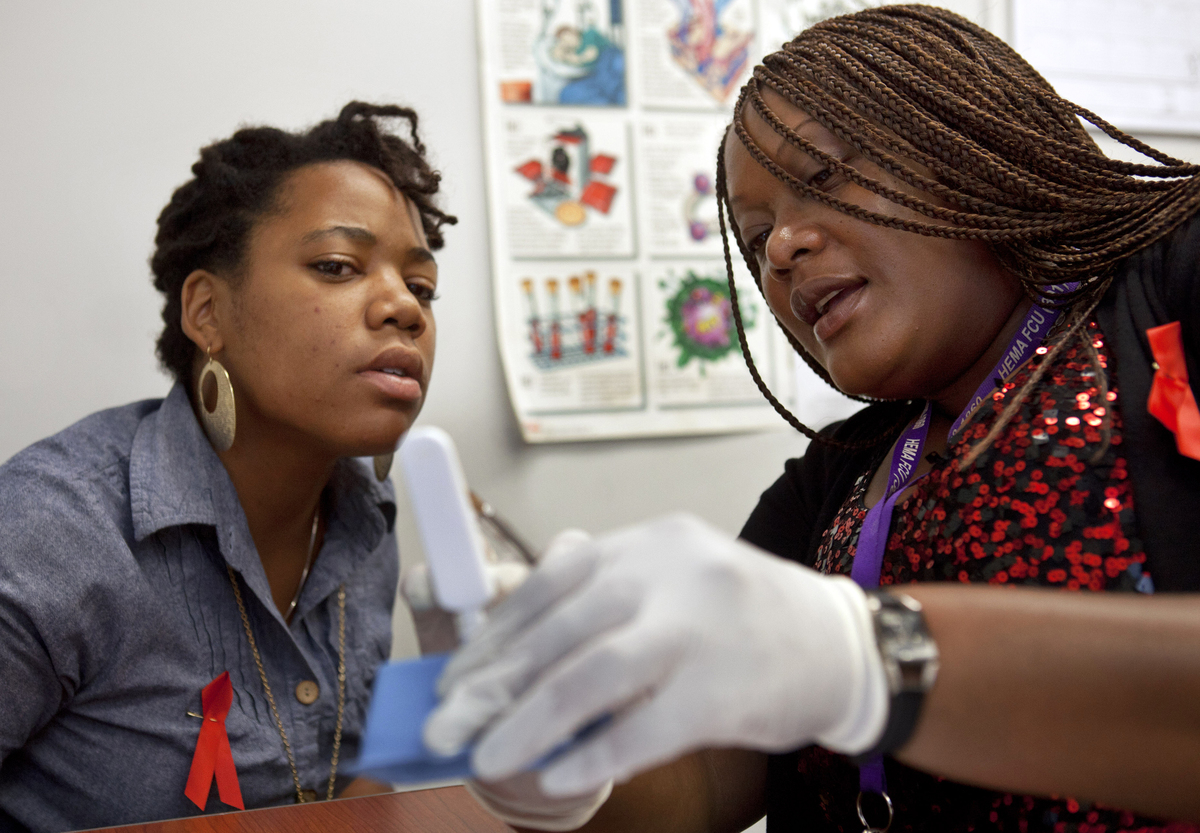 HIV counselor Natrussa Williams explains the results of the oral HIV test to Katherine Tapp at the D.C. Department of Motor Vehicles in southeast Washington. There have been no babies born with HIV in the city since 2009, in part because of increased testing at locations including some high schools and the DMV.

Part Of The Routine

Now, D.C. pays for more than 120,000 HIV tests a year. There have been no babies born with HIV in the city since 2009, in part because of increased testing. Some high schools offer HIV tests, and residents can get free tests done at more than 20 locations, including at the Department of Motor Vehicles.

But Michael Kharfen, the D.C. Health Department's Community Outreach bureau chief, wants to do more. He says more than 70 percent of residents diagnosed with HIV saw a doctor in the previous year but weren't tested for the disease. Every doctor in the city has received a letter urging them to include an HIV test in their patients' annual checkup.

"Basically, from 13 on, that every year you get an HIV test as part of the other tests of your health: blood pressure, your body index, your cholesterol," he says. "HIV should be part of it because it's a common disease in the District of Columbia."

Outside Town, a gay nightclub in D.C., Loubriel and Krautwurst wait to give HIV tests. They wait and wait, but no one shows up. Rich McPherson and R.J. Fletcher say getting tested is embarrassing.

"Who wants to get a scare in the middle of the street outside of the club?" McPherson says.

Fletcher agrees. "Who really wants to walk out of a van that's parked on the street saying, 'Get HIV Tested'?"

But as Loubriel and Krautwurst pack up to leave, they insist it's not a waste of time.

"We never think it's pointless, because bringing the van — it just gets the conversation started," Krautwurst says. Like, "'Oh well, I haven't gotten a test in a long time, maybe I should go and get one.' Or talking with their friends and saying, 'Well, have you gotten a test?' "

Talking, they say, is the first step to getting tested.