Accessibility links
Janet Feder: An Avant-Garde Artist Takes A Real Risk Janet Feder has built a career on unusual instrumental guitar playing. Her new album, Songs With Words, is the first to feature her singing — a bold choice that may alienate her old fans. 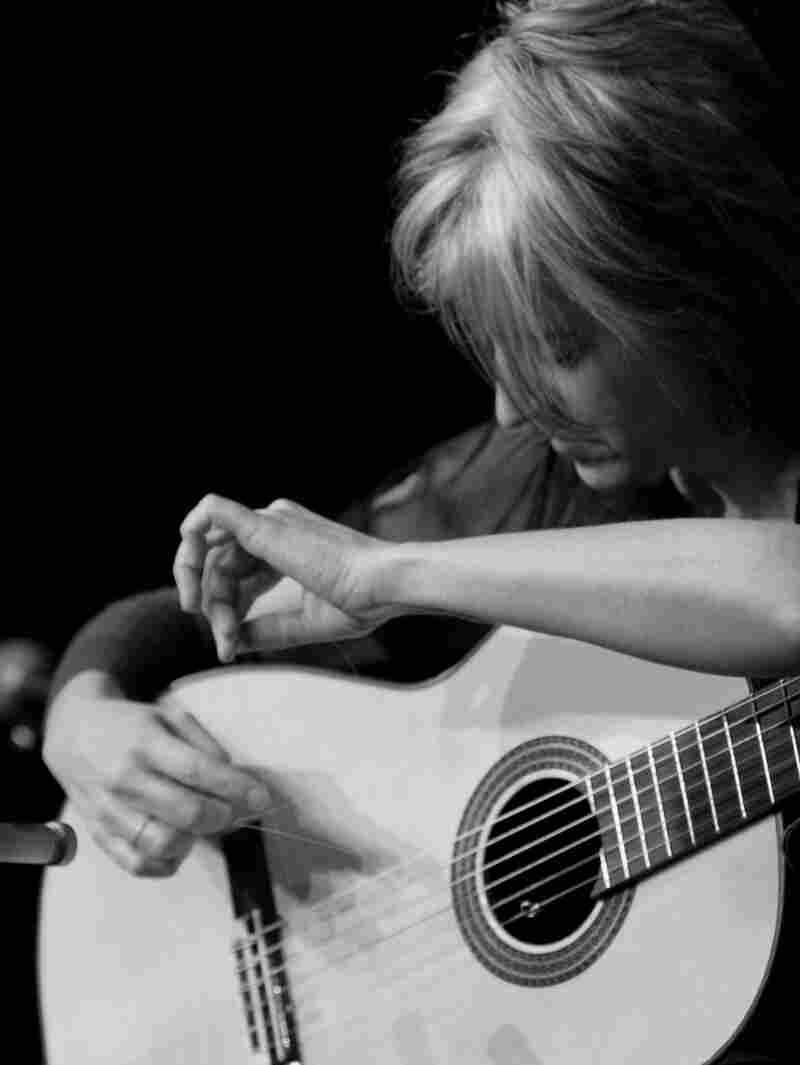 Janet Feder built a career on unusual instrumental guitar playing. Her new album, Songs With Words, will feature her singing for the first time. Courtesy of the artist hide caption 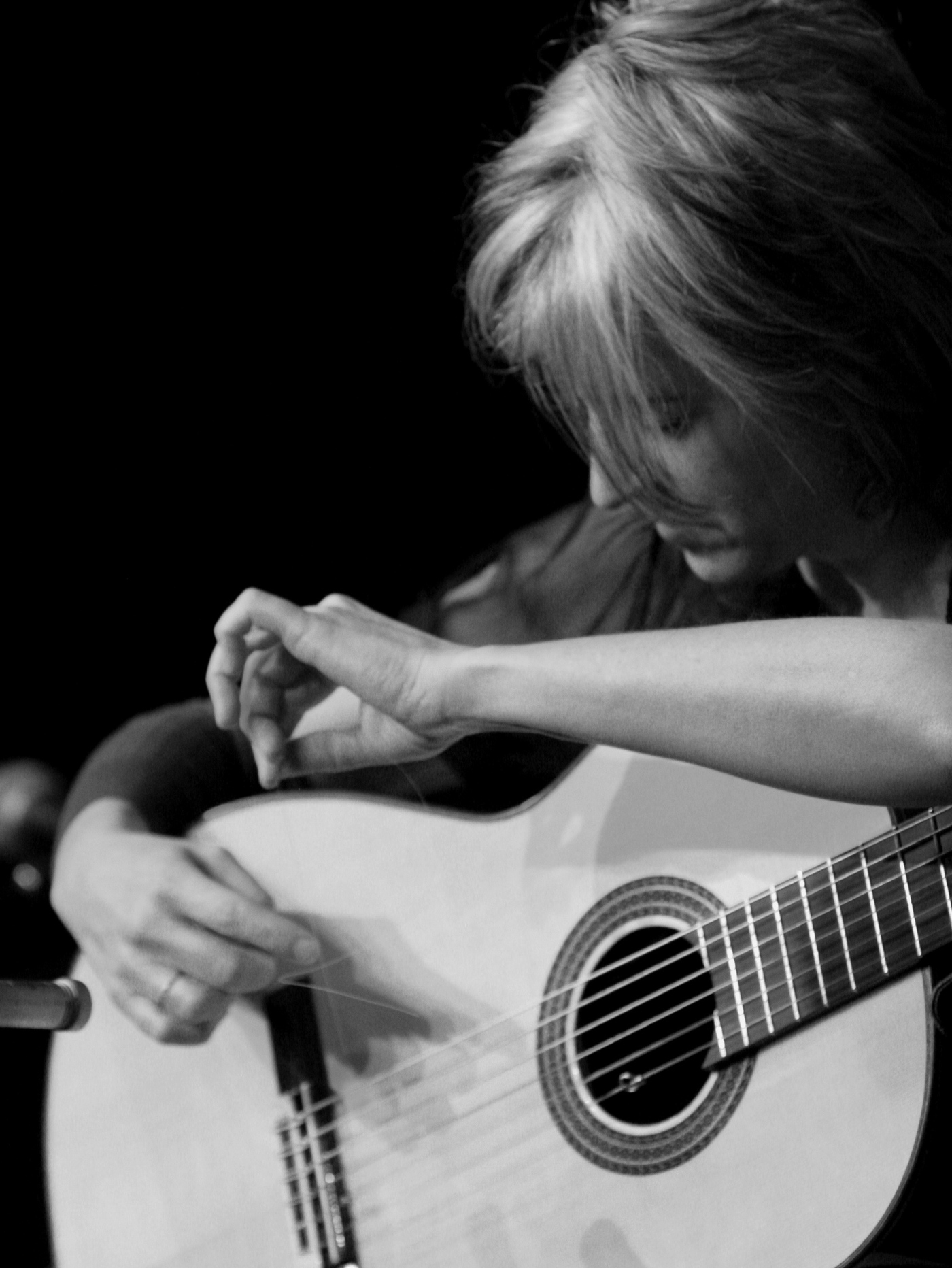 Janet Feder built a career on unusual instrumental guitar playing. Her new album, Songs With Words, will feature her singing for the first time.

Janet Feder does things to her guitar.

"If I play the second string with nothing on it, it sounds like this," Feder says, plucking out a note. "Just a pure pitch."

Then, Feder produces a split ring (like the kind you put your keys on, but smaller), affixes it to the same string, and plays. The sound is rounder, more metallic, and wobbles as it rings out.

"What it creates here is more like a spectrum of sound," Feder explains. It has a lot of low tone and high tone to it at the same time, like a bell does."

In formal circles, this is called "prepared guitar." Feder's not the first to try it, though she's been experimenting with it for some twenty years now. She started playing guitar as a kid in Colorado, singing folk songs. When she was about 18, she embarked on a decade of intense classical guitar study — and got pretty good. Then it all fell apart.

By chance, a friend happened to ask one day, "Doesn't anybody ever put things on their guitar strings?" So she tried it.

Feder demonstrates a few of her unusual guitar techniques.

"And before I knew it, I was playing like a little kid again," she says. "There was just this sort of joy in discovering sounds that were not expected or anticipated from the guitar."

Feder had the time to search for those sounds thanks to a full time job teaching in — and eventually heading — the music department at Naropa University in Boulder, Colo. Her childlike sense of discovery, and her ability to turn it into music, has attracted some heavy-duty fans — like jazz guitarist Bill Frisell.

"I've been playing guitar my whole life — that's pretty much all I think about," Frisell says. Typically quiet and self-effacing, Frisell gets pretty excited when discussing Janet Feder.

"When someone comes along that's doing something that I've never seen or heard before, it's just so inspiring for me. I mean, it's not just that — it's that it's beautiful music," Frisell says. "[Feder is] like an inventor. She's just really using her imagination in an incredible way."

Fred Frith, one of the contemporary pioneers of prepared guitar and a Professor of Music at Mills College, concurs.

"I think she's unique," Firth says. "She's created a completely new kind of palette, where she is apparently accompanying and soloing at the same time, and playing percussion at the same time. It sounds like you're hearing more then one person playing a lot of the time and it's really intriguing."

Janet Feder describes her instrumental music as being like a postcard: a story she keeps in her head as she plays. One of her compositions came from a story she heard on NPR about families who are separated by the border between Syria and Israel — a border they can't cross — so they shout back and forth across the valley that runs along it, through megaphones.

"The melody of the voices traveling across this valley was beautiful, so beautiful. And at the same time i just wanted to cry. So I wrote this piece of music about it."

That piece, "Shouting Valley," took on an unexpected bit of atmospherics when Feder recorded it.

"I was recording in a theater in downtown Denver, and when I finished playing the last note of the piece — it's not far from a local hospital — a helicopter flew overhead and that got captured in the recording, and so it really sort of emphasized that military zone sort of feel to it."

Chance events seem to be a feature of Janet Feder's life. Another piece, "O The Sky Falling Moment," was inspired by another real life helicopter — one that crashed.

"I wanted to convey this idea in the middle of the song, of that moment when they knew they were falling," she says, "and make it more like where time just goes into super slow motion, and just wait and wait for this thing to fall."

Her husband was in that helicopter. Fortunately, she explains, "It's a happy story — everybody lived." She adds, "I had to write something about it."

That song is on Feder's new album, Songs With Words. The album was co-produced by Joe Shepard, who invited Feder to record in his state-of-the-art studio in Boulder for free because he likes her music. In return, he and Feder will share in any proceeds — an iffy prospect, considering that this release represents a hard left turn for Feder, from instrumental music to guitar and voice.

"Traditionally, she's kind of been on the avant-garde side — and still is," Joe Shepard says. "She is pretty much revered in the Denver music scene for being, first of all, a woman, which is pretty rare, and a great instrumentalist . But this is pretty brave to do. And we're kind of between worlds right now. It's not really an avant-garde record, but it's not a mainstream record."

And yet, Feder is now at the point where she wants to put words to her musical postcards.

"My intention had been to write songs for other people to sing ... but when the possibility of making this record came up, Joe wanted to start in two weeks, and so i didn't have time to share these songs with other people," she says. "I thought, 'Well, I'll just try it and see if it sounds good and if anybody likes it.' And i started to feel the same kind of fascination that i felt with these small metal object on my strings. I started to feel this kind of fascination with how words fit with music and come out of my mouth. For all the years of playing up until now, I really felt like the words were coming thorough my hands, now some of it is actually coming out of my mouth."

She says it's terrifying. But approaching the unknown is something Janet Feder knows a little something about.