Accessibility links
After Years Lost, South Africa Rejuvenates HIV Plan The country has the largest HIV epidemic in the world, and it's also had one of the most conflicted responses to the virus. For years, the government questioned the link between HIV and AIDS and offered little by way of treatment. Now, South Africa is trying to make up for lost time. 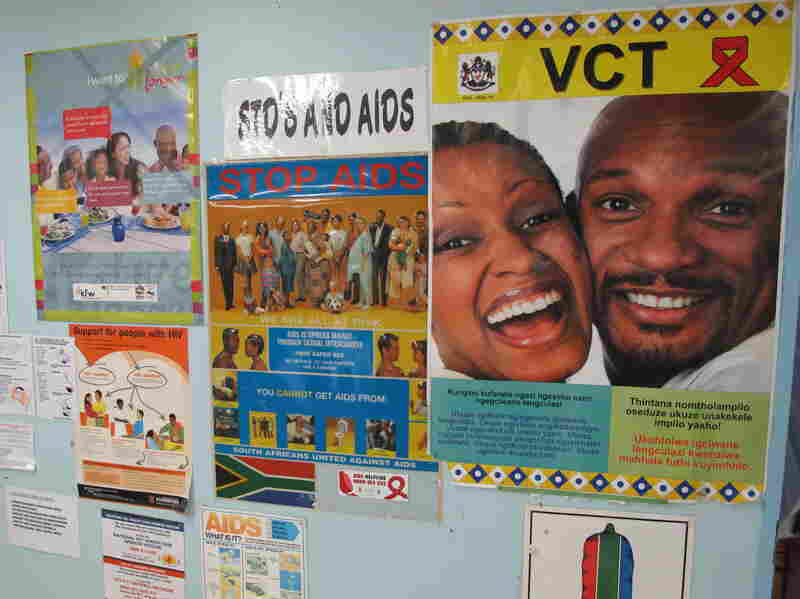 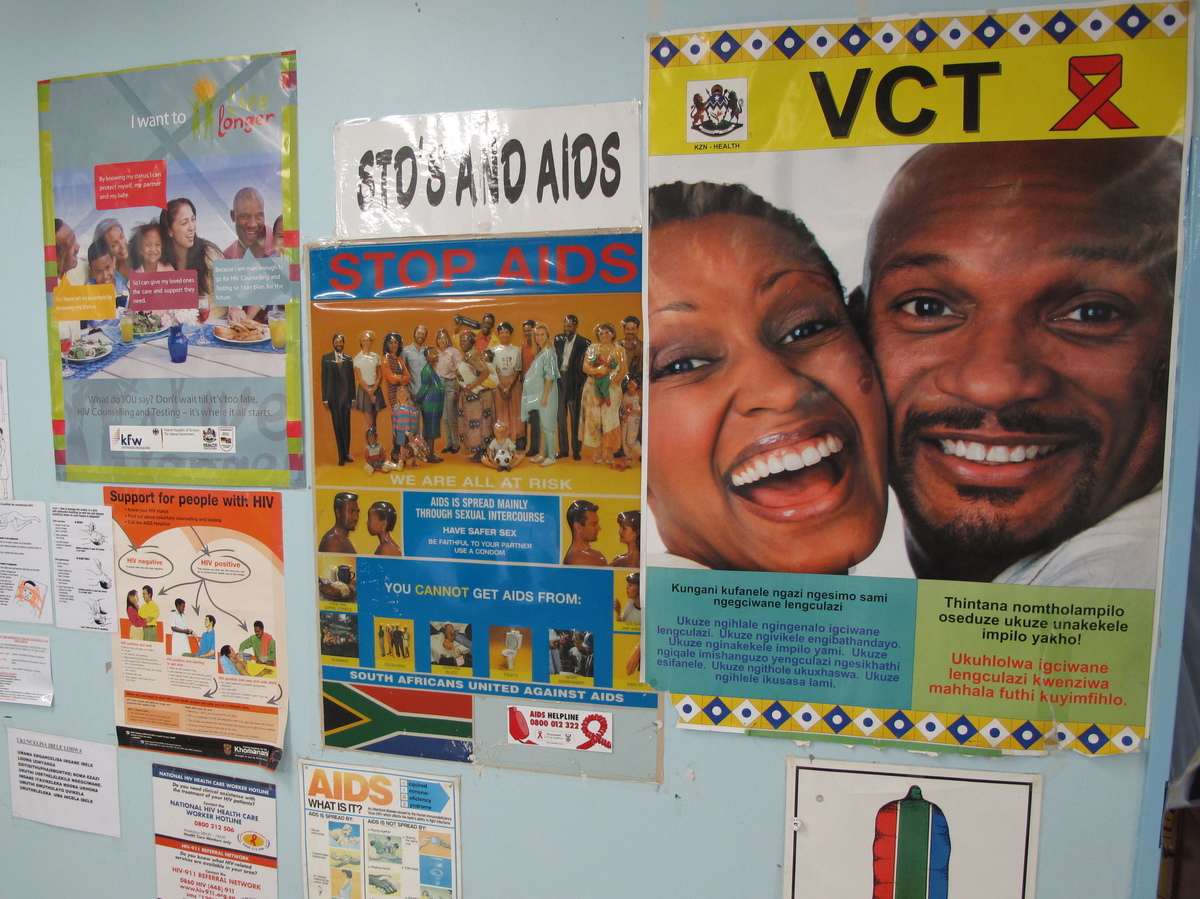 Anti-AIDS posters hang in the Eshowe public health clinic in South Africa's Kwazulu-Natal province. Clinicians there are hoping to slow the spread of HIV by getting more people treatment.

With the largest HIV epidemic in the world, no nation has been more affected by HIV and AIDS than South Africa, but the country has also had one of the most conflicted responses to the epidemic.

A decade ago, as the virus was spreading rapidly, then-President Thabo Mbeki was questioning the link between HIV and AIDS. His health minister was advocating the use of beetroot, garlic and lemon juice to treat it.

Now, years later, South Africa is trying to make up for lost time. The nation is attempting to put in place a cutting-edge HIV treatment and prevention program.

The Growth Of A Clinic

The lobby of the municipal health clinic in Eshowe, located in northeast KwaZulu-Natal, the province with the highest rate of HIV in South Africa, is plastered with posters urging patients to get tested for HIV.

It's in small clinics like this that you see the South African government's new commitment to battle the epidemic. While AIDS has been around for three decades, this clinic only started providing HIV drug treatment three years ago. Futi Mlambo, a nurse at the clinic, says it started slowly in 2009.

But now, she says, they're putting roughly 20 people onto treatment every week. The big change came last year, when nurses — rather than just doctors — were allowed to place patients on drug therapy based on lab tests.

"If their CD4 [cells are] too low, they have to get the treatment immediately, they do that. Everything is being done here," Mlambo says.

In a country with almost 20 percent of the adult population infected with the virus, this shift in care from doctors to nurses is a major step in making treatment more accessible. Mlambo says drug therapy itself has also had remarkable effects — even on the staff.

"Once you see a person who comes in for testing and he can't even walk," she says, "And then a few months after starting the treatment, you find that he's well and walking around, you feel that, 'You know, man, I've done something!'"

She says the drugs are providing hope and encouraging more people to get tested for HIV. Yet that hope could have been available years ago.

"I think South Africa certainly lost at least 10 years pretending that HIV didn't cause AIDS, and that they could just not do anything significant," he says.

The new minister of health, Aaron Motsoaledi, has vowed to completely eliminate HIV transmission from mothers to their babies. In 2010, he launched a massive testing program to try to get 15 million people tested.

Goemaere says it's clear now that the leadership in South Africa wants to try to set up the best HIV prevention and treatment program in the world.

"Trying to integrate all innovation, including treatment as prevention, into existing program[s]," he says. "We paid the 10 years lost with extremely high infection [rates]."

In KwaZulu-Natal, 30 percent of pregnant women are infected with HIV. At some government health clinics, half the women are HIV-positive. As the government has accepted the epidemic, so have many ordinary South Africans.

In the southern part of KwaZulu-Natal, Beauty Nkonyeni runs what she calls a "village for the vulnerable." She feeds AIDS orphans. She takes in indigent elderly. She provides beds to people dying of various diseases. Ten years ago, people with AIDS were shunned, Nkonyeni says, and their neighbors often assumed they were under a curse.

"People were dying in their homes. When they die, it was not HIV that was suspected. It was suspected that the person was bewitched by the neighbors," she says.

Back then, local residents didn't even want to feed them.

"They used to stay in their room, and they'd push their food because they don't want to get in contact with them," she says.

That's changed now. She says as the government has shifted how it views HIV, most South Africans have, too.