Accessibility links
'Free Bates': The Third Season Of 'Downton Abbey' And More From PBS PBS kicked off its presentations for press and critics with cooking, Kenneth Branagh, and quite a tale of Shirley MacLaine and Maggie Smith.

'Free Bates': The Third Season Of 'Downton Abbey' And More From PBS

'Free Bates': The Third Season Of 'Downton Abbey' And More From PBS 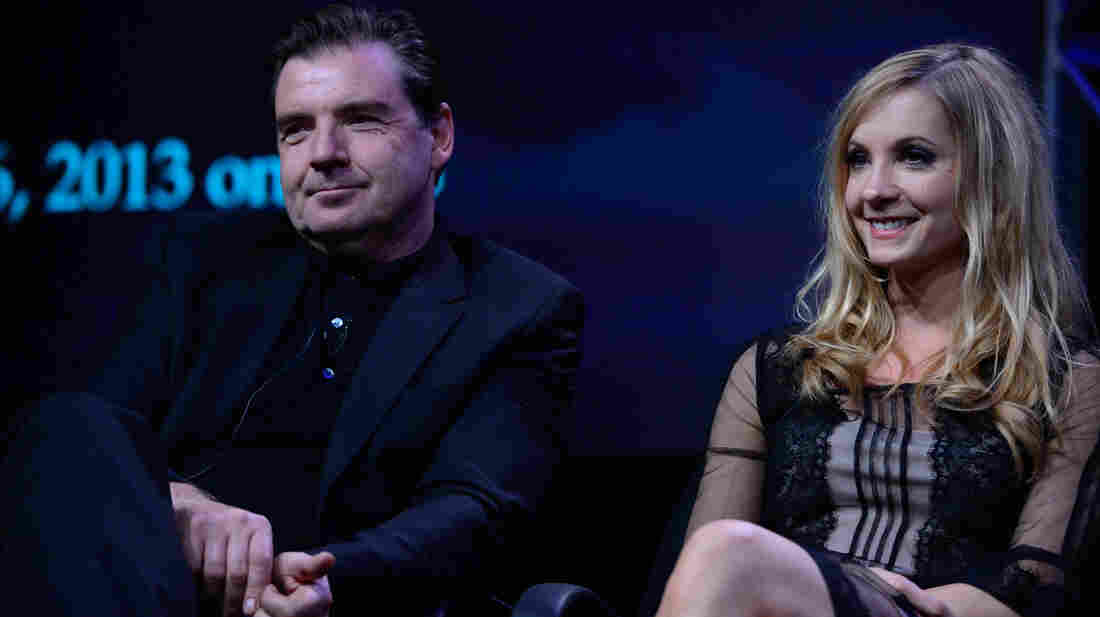 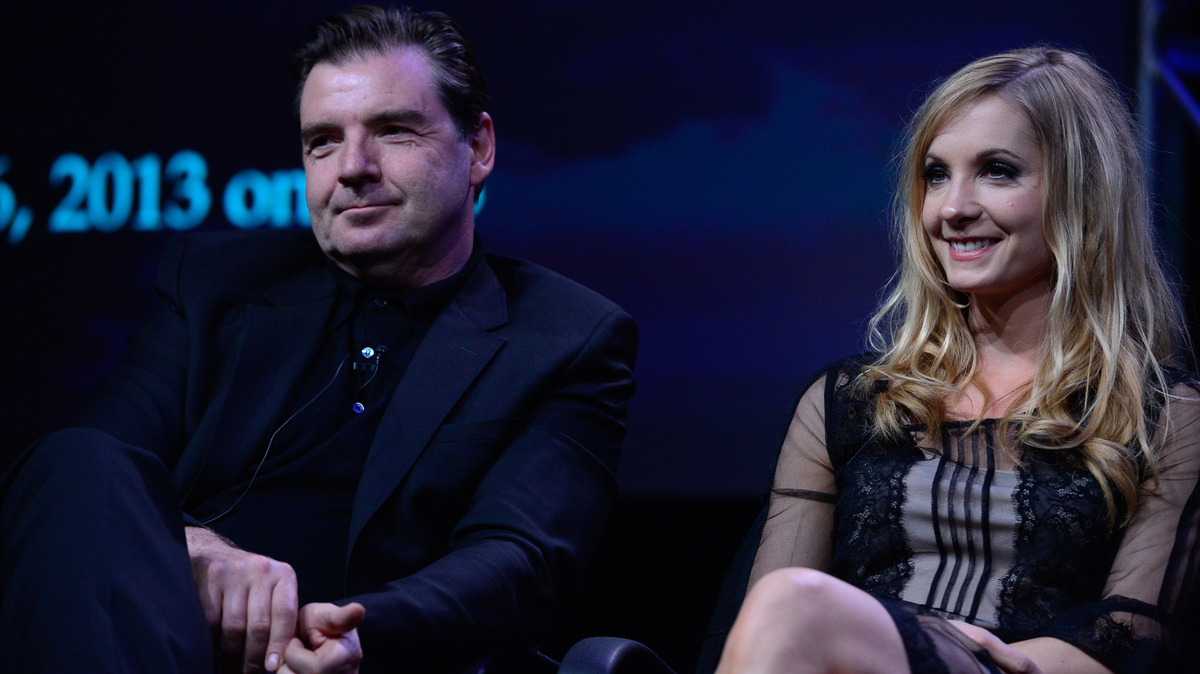 Yesterday was the first day of the Television Critics Association press tour, when TV reporters and critics descend upon Beverly Hills to hear about what's to come in the next six or eight months. We'll hear from all the big broadcast networks and most of the big (and not-so-big) cable outlets, but we're starting this year with PBS.

Candidly, not all the critics are showing up for PBS — not all of them write about it very much. It's a shame, though, because yesterday may have been, on the whole, the liveliest day I've ever had at press tour.

Early in the day, they presented an upcoming Independent Lens documentary called "Soul Food Junkies," in which filmmaker Byron Hurt uses the illness and death of his father to look at soul food and its importance to black culture. It's a very smart film, alarming but not shaming, about how vexing it is to tell people to eat differently when they associate making great traditional foods with the closest social bonds they have.

The film includes comments from Dick Gregory — comedian, civil rights activist, and natural-foods advocate. Gregory was there for the panel discussion, and he talked a lot about his philosophy of food, including his position that a sandwich "is a violation," because it mixes protein and starch. Actress Mary-Louise Parker is the host of Independent Lens, and at first, it looked like she might be asked nothing at all, but she was, and it turns out that she had a recent incident where her babysitter gave her kids corn dogs and pizza for lunch, and she was not happy at all. (Do not feed corn dogs to Mary-Louise Parker's kids. This is a tip from me to you.)

PBS then held its executive session, which is where a network sends a honcho — in this case, president and CEO Paula Kerger — to talk about everything from how the network is currently making news to scheduling changes to plans for new projects to, in the case of PBS, funding issues.

At some executive sessions, there's a clock running while everyone waits to see who asks the first question about a particular uncomfortable topic, and this year, it was the decision to replace Fred Willard as the host of the new series Market Warriors after he was arrested for lewd conduct. The question did inevitably arrive, and Kerger said that they had felt it would be a "distraction" for a new show they're working to launch, and that they had to act quickly because they're currently in production on the next episode. "It's a new series, and our concern really is that his circumstance would become a distraction to the series, which we're hoping will have an ongoing presence on public television. We talked to him, and we decided that what we would do is bring Mark Walberg, who is hosting Antiques Roadshow — as you know, Market Warriors was intended as sort of a series to run in parallel with Antiques Roadshow, and we asked Mark to do both."

We moved on to a film coming up on American Experience called "Death And The Civil War," produced by Ric Burns based on the book This Republic of Suffering: Death and the American Civil War by historian Drew Gilpin Faust. This is fairly traditional documentary filmmaking, but it's a grim, curious look at how our cultural response to death — as well as the technology and bureaucracy of death and caring for the dead — was affected by the massive scale on which people died during the Civil War.

I missed a session on the upcoming drama series Call The Midwife, which is a huge hit in the UK, but we'll check back before it premieres Sunday, September 30.

They then presented Broadway Or Bust, a three-part documentary starting September 9 that follows the intense week of rehearsals leading up to the presentation of the National High School Musical Theatre Awards. What happens is that regional winners of awards for high school musical theater are all sent to New York to participate in a week-long "boot camp," at the end of which they perform and the national awards are given out.

Obviously, this bears some resemblance to competition-performance reality shows, but it isn't, really. This isn't a competition you enter; these kids just get awards for their work and then get to participate in another performance that results in another set of awards. A bunch of the kids in the show were there for the panel, and they performed for us on top of answering questions. They are, you will probably not be shocked to hear, talented. Theater kids are a particular breed — not that they're all alike, but they do tend to share certain strands of DNA — and these are real, genuine theater kids whose aspiration is Broadway, not the ones who aspire to American Idol.

In fact, asked about any interest in that kind of thing, 15-year-old Evyn Mirasol was pretty emphatic that that's not her bag: "As musical theater performers, when we sing a song, we tell a story. We don't just sing a song ... to show off our voices and get all 'belty' or whatever. As musical theater performers, we mean what we say, and we say what we mean." So take that, people who smile all the way through "Chain Of Fools." 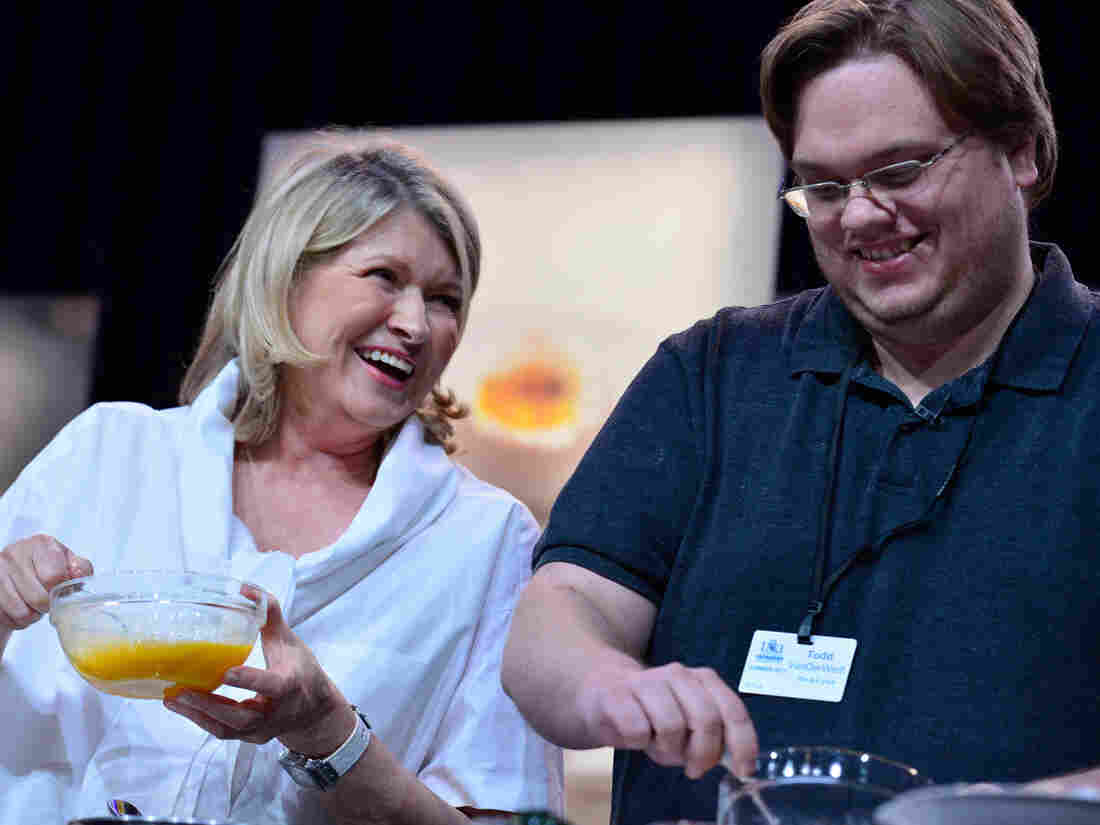 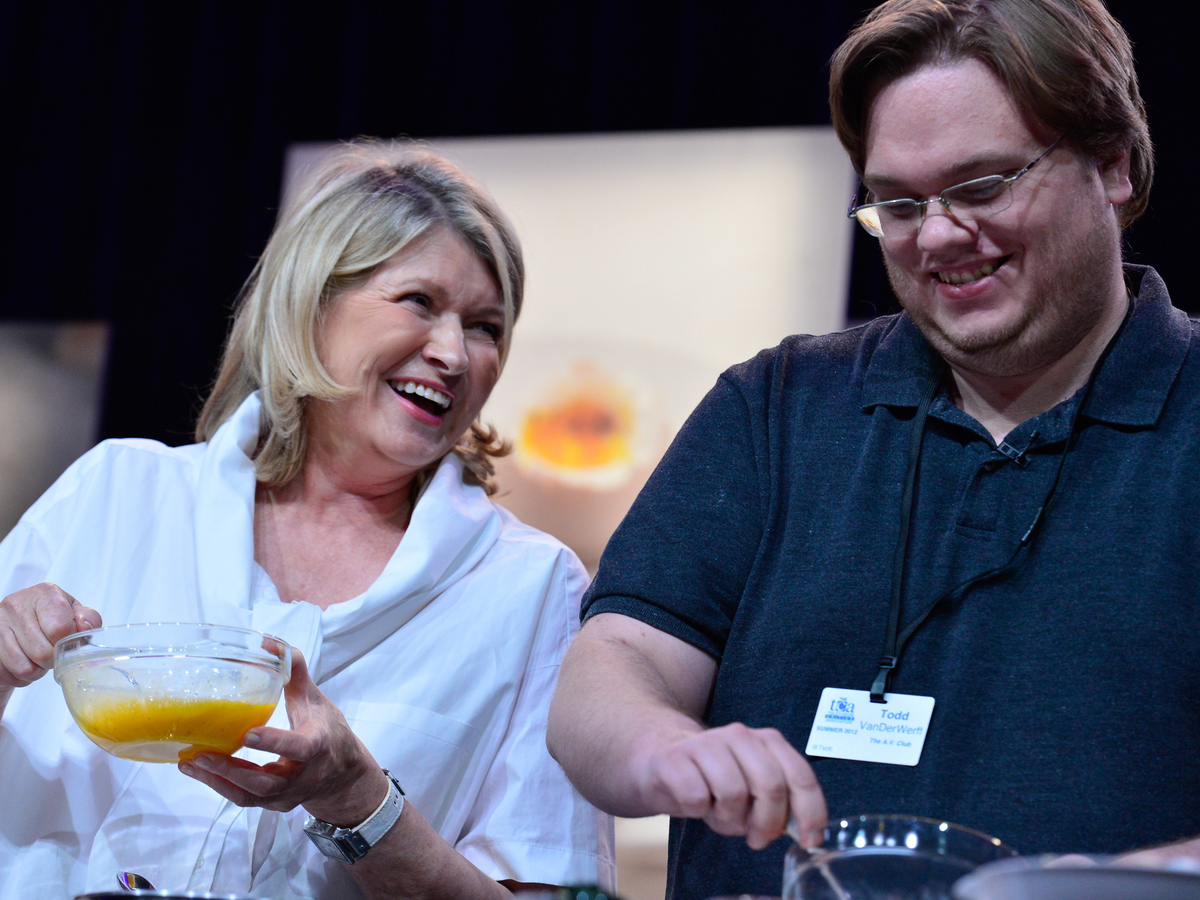 Martha Stewart and Todd VanDerWerff work on omelets during her cooking demonstration.

We then heard from Martha Stewart, whose new show Martha's Cooking School is coming this fall. Now, she said lots of things about cooking and her show, but the big news out of this panel was that two critics from the audience, including the A.V. Club's wildly prolific Todd VanDerWerff, got to make omelets with Martha Stewart. (She made fun of Todd's whisking technique.) And then we all made vinaigrette at our desks. (This is absolutely true.) Perhaps the weirdest moment was realizing that Stewart had turned to Ken Burns — who was in the audience of her cooking demonstration because he's here to talk tomorrow about his upcoming film The Dust Bowl — for the answer to a history question. So to recap: I watched a guy I know make an omelet with Martha Stewart while Ken Burns looked on. And it's only the first day.

Kenneth Branagh came by to talk about the upcoming Masterpiece Mystery series "Wallander III." He did talk about the series, and about his upcoming projects, but perhaps the most endearing part was his discussion of the envelope he received that began the process of being knighted.

I thought I had really been in trouble. I had been spotted speeding somewhere. Obviously, I don't speed. But I opened it, and in very, sort of beautifully archaic language, it said, "In strictest confidence," which was in huge, bold type and underlined. And then it went into a very, sort of, old-y world, the sentence finally ending up with "conferring upon you a knighthood. Please tick the yes box if you would find this agreeable."

So I found it agreeable, and I ticked the box. But then I sent it off, and they said in it, "But once you've done this, you won't hear from us again until the morning of the announcement on Her Majesty's birthday." And I've since learned that it's rather common, if you are privileged enough to receive such a message, that you then worry as I did, having posted it the next day, that it had ever arrived. So it was a little bit of a nervous moment on the morning of the announcement. But I was very, very, very surprised, and I was very touched. And I thought of my mom and dad up in the great green room in the sky, who would be absolutely made up. So it was an easy yes.

And then it was time for the panel presentation for the third season of Downton Abbey, coming in January.

After opening with a very funny clip package about the impact of Downton on popular culture (including everything from Michelle Dockery's appearance with David Letterman to the "Downton Tabby" cat parody), they brought on creator Julian Fellowes, producer Gareth Neame, and a good chunk of the cast: Hugh Bonneville, Elizabeth McGovern, Brendan Coyle and Joanne Froggatt (Bates and Anna), Dockery, and Shirley MacLaine, who's showing up this season as Cora's mother. 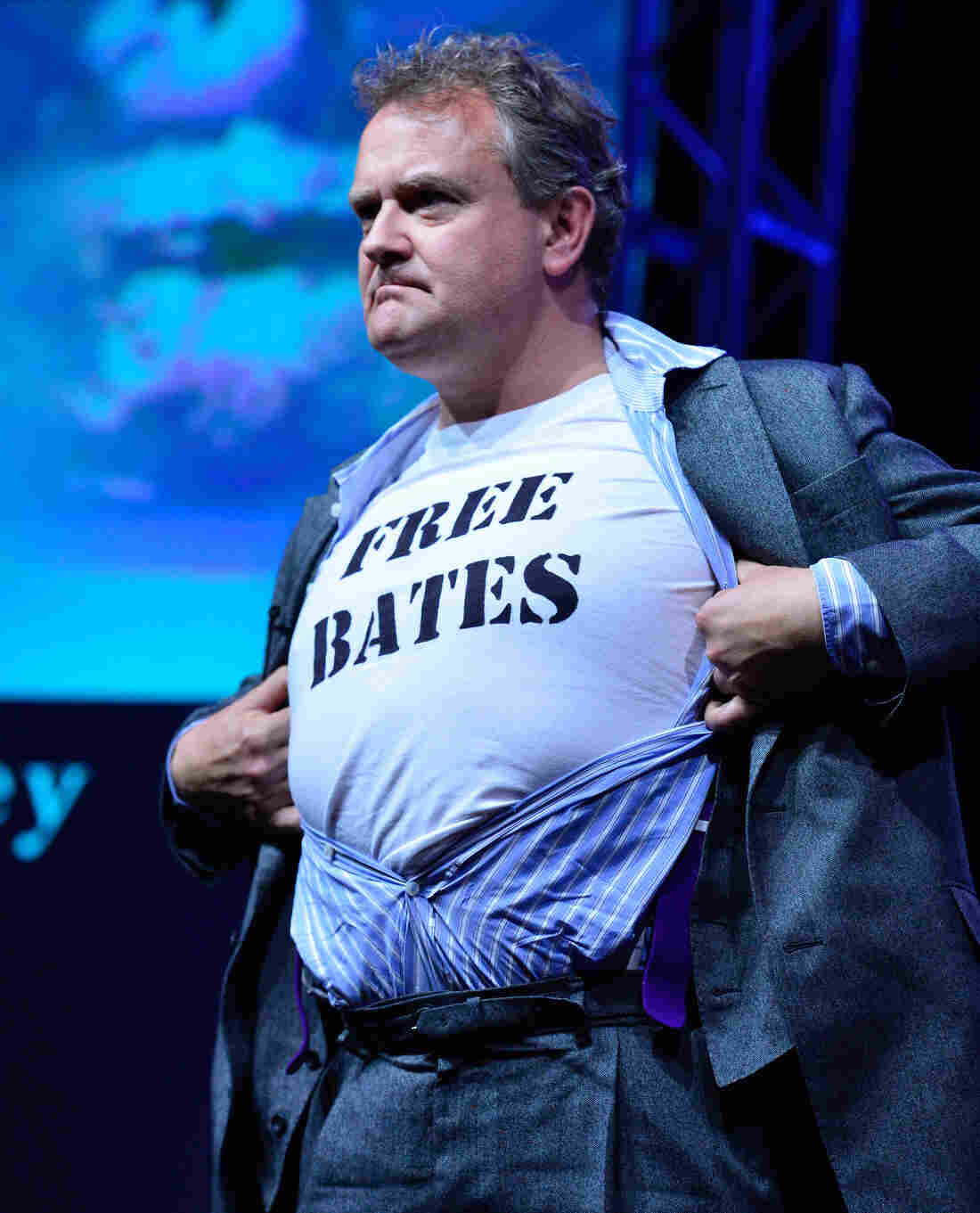 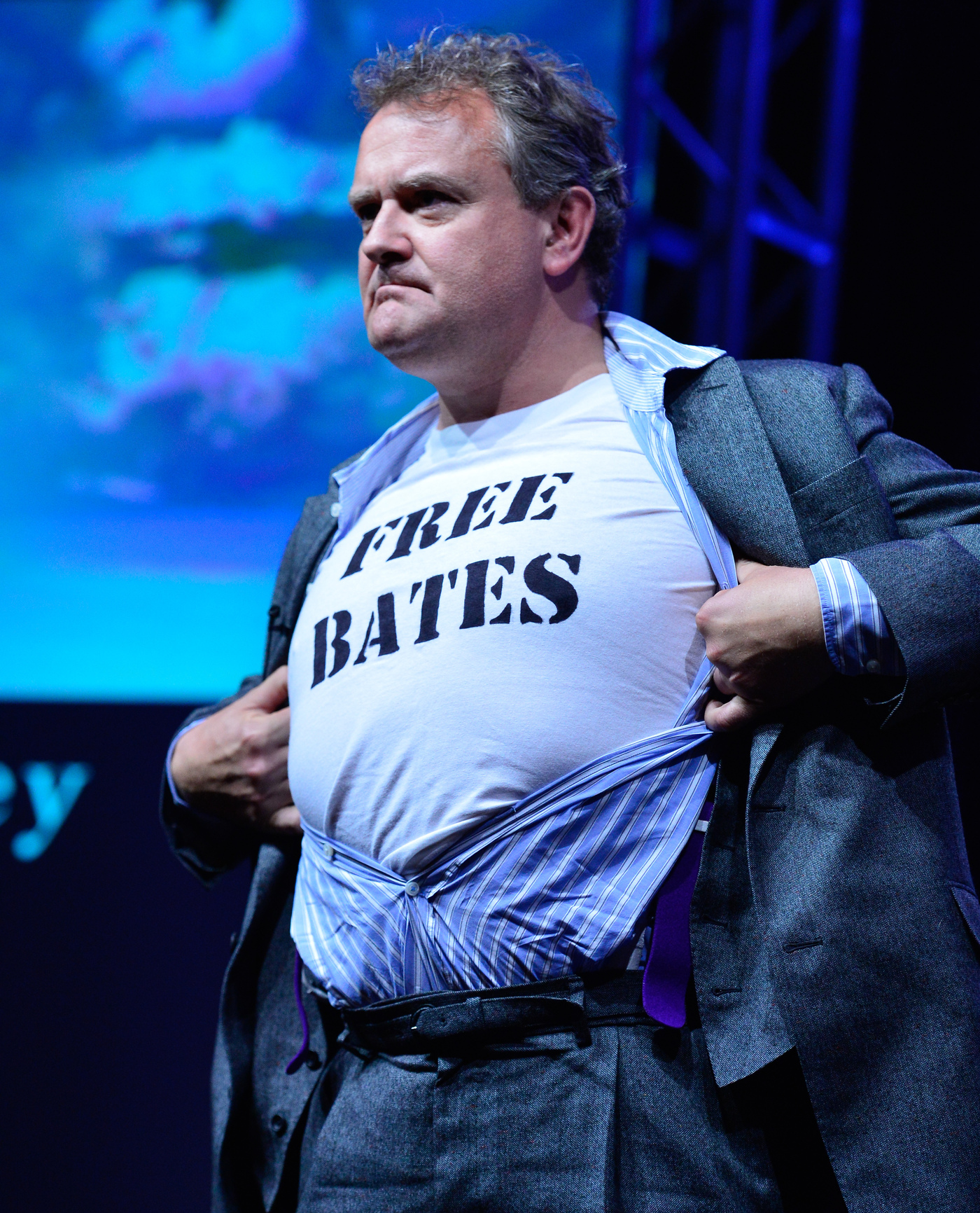 Hugh Bonneville, who plays the Earl of Grantham on Downton Abbey, shows his feelings during the press tour presentation Saturday night.

The Downton session, though very British on the whole, was enlivened by MacLaine's thoroughly American goofiness, particularly when she talked about meeting up with Maggie Smith. First, she said, "Well, we were lovers in another life," getting huge laughs. But then she told this story.

[Smith] told me that we had met 40 years ago backstage at the Oscars next to the catering table. And I was up for something, and there was this big chocolate cake on the catering table. And whatever I was up for, I lost, and somebody else won. And Maggie said, "You know what you did, dear? You tucked right into that chocolate cake and said, 'F--- it. I don't care if I'm thin ever again.'"

My other highlight came when someone asked the cast whether any of them had taken the Facebook quiz that went around a while ago that decided which Downton character you are. Brendan Coyle, who plays Bates, raised his hand with a grin. "I'm Lady Mary," he announced. "I'm really happy about it."

As you can imagine, very little was said about the upcoming season or what you should expect, since it's still months and months away. We will certainly talk more about that part when it's closer. Suffice it to say that the evening closed when Bonneville stood up, turned his back on the audience, opened his jacket and tie, and turned around, pulling back his shirt to reveal a T-shirt with the slogan, "FREE BATES."