Accessibility links
Testing, Treatment Key Weapons In AIDS Fight The International AIDS Conference is being held this week in Washington, D.C. HIV infection in the host city is the highest in the nation. Though treatments have come a long way in the past 30 years, those high infection rates — especially among the black community — show there is still much work to be done. 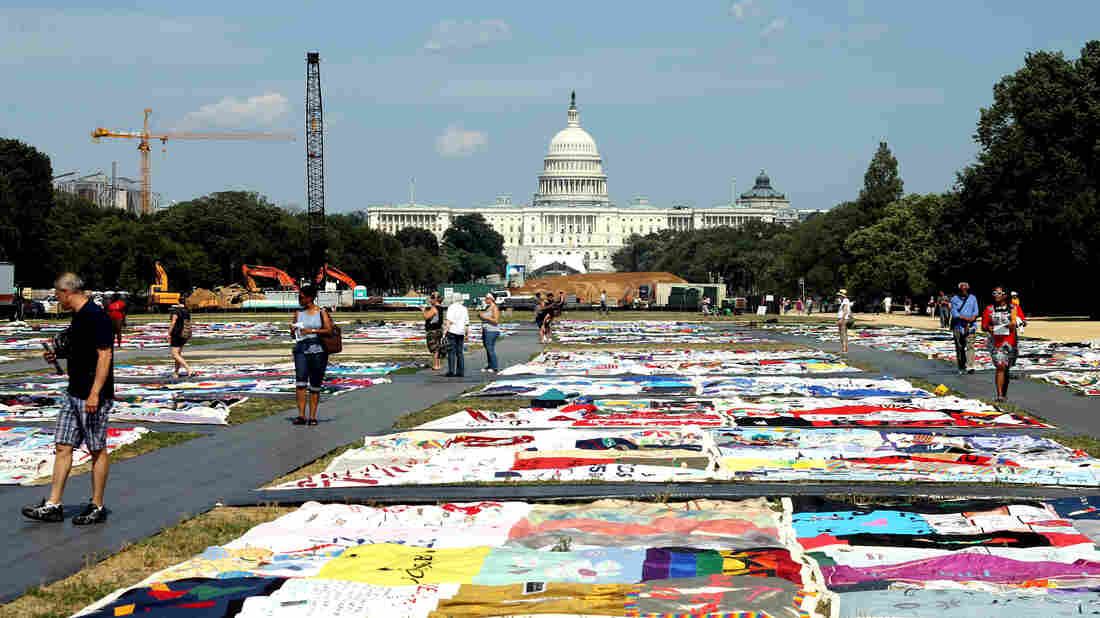 Visitors view the AIDS Memorial Quilt at the National Mall in Washington, D.C., where the International AIDS Conference is being held this week. Ebony Bailey/NPR hide caption 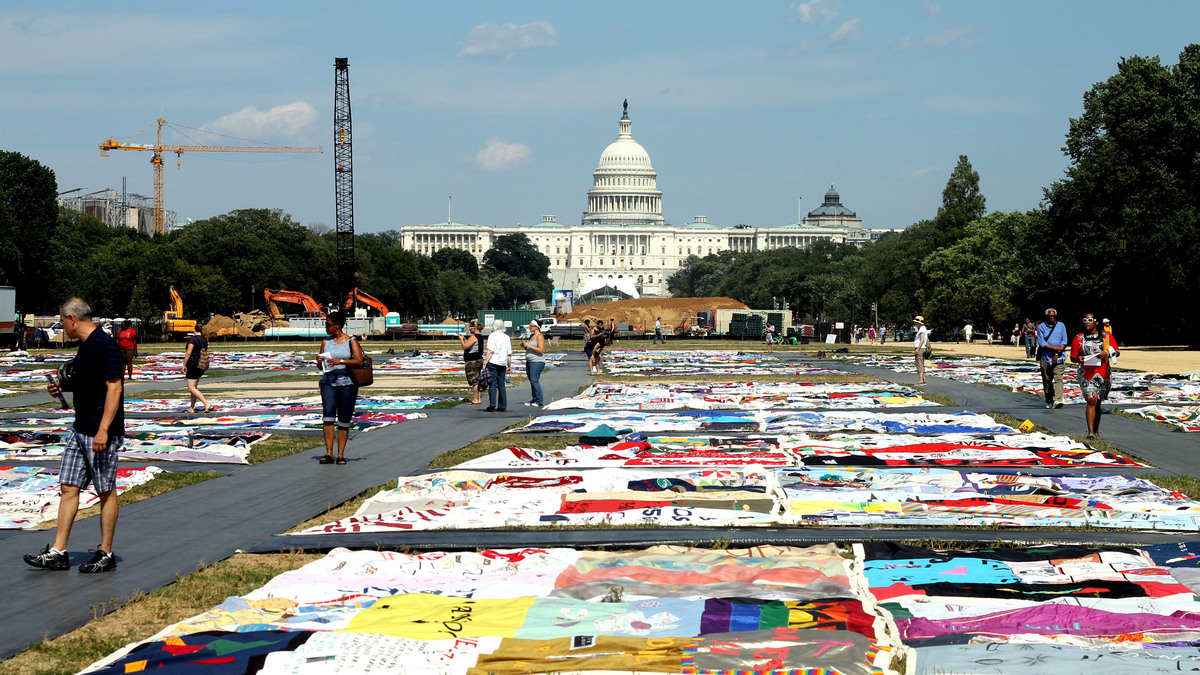 Visitors view the AIDS Memorial Quilt at the National Mall in Washington, D.C., where the International AIDS Conference is being held this week.

Thirty years ago, we first began hearing about AIDS — then a mysterious, unnamed disease that was initially thought to be a rare form of cancer that affected gay men. Scientists soon learned that it was neither of those things, and, in fact, it was a virus that everyone was vulnerable to.

That vulnerability became apparent when, in 1991, basketball superstar Magic Johnson announced that we would retire immediately because he had contracted HIV.

Johnson assumed he would begin to manage his own death, and yet today, it's very likely people like him will live to see Social Security checks and Medicare benefits. The biggest part of that reason is because of the breakthroughs in treatment. The new drug Truvada, which can actually prevent HIV, was approved by the FDA this week.

The battle, however, is far from over. Each year in the U.S., 50,000 new cases of HIV are diagnosed. One of the hardest-hit places is Washington, D.C., which plays host this week to the International AIDS Conference.

AIDS In The Nation's Capital

HIV infection rates in Washington are higher than in many countries in Africa; 2.7 percent of the population – roughly four times the national rate — has HIV.

The city's black community is hit especially hard, with an infection rate of 4.3 percent. Less than half of D.C. residents are black, yet they account for 72 percent of those living with HIV/AIDS in the city.

According to Dr. Gregory Pappas, who heads the HIV/AIDS Administration for the city's health department, 20 percent of residents who are infected have no idea.

"So in D.C., that means that 4,000 or 5,000 people are out there on the streets, living their life [and] spreading disease," Pappas tells NPR's Amy Held. "Half of new infections come from people who don't know their status."

The city is making some progress. Not a single HIV-infected child has been born here since 2009, and new infections among intravenous drug users are down 70 percent since 2006.

Yet, there is no doubt that AIDS remains a huge problem in Washington.

"We have two or three people in D.C. infected every day," Pappas says.

Most of them are in the city's black community. Between 2006 and 2010, newly diagnosed HIV cases — not AIDS — rose about 20 percent among blacks, yet fell among whites by nearly a third.

So what accounts for the disproportion? Pappas says it is a combination of poverty and lack of education. A third of people in the city get tested each year, but Pappas says it needs to be higher.

"I think it needs to be about two-thirds," he says. "We're getting there, [but] we've got to make testing normal."

When Dr. Jeffrey Lennox began his career 30 years ago, the AIDS epidemic was just beginning to take shape.

Lennox, a leading AIDS researcher at Atlanta's Grady Memorial Hospital, tells weekends on All Things Considered host Guy Raz that those early years of the disease were difficult.

"Taking care of patients at that point, once we knew how to diagnose it ... basically everybody I took care of died," Lennox says.

A change came when, in 1995, the first triple-drug combinations became available, Lennox says. He saw an amazing transformation take place, where people who were on their deathbed were discharged within a month.

"It was the most amazing thing and it still is," he says. "We still get people who come in at the end stages of AIDS and if we catch them in time, many of them are restored to normal health."

Today, there still is no outright cure for HIV/AIDS. There are, however, combinations of drugs that can act as lifelong therapy to suppress the infection, Lennox says. He estimates that the average person who goes on treatment and suppresses the infection will live about 30 years.

The problem is getting people on those HIV/AIDS treatments. According to the Centers for Disease Control and Prevention, about 25 percent of those infected in the U.S. are in treatment and have their disease under control. That remaining 75 percent is made of those who don't know they have the disease, those who don't want to seek treatment and those who are in treatment but not reliably taking their medication, Lennox says. He too emphasizes testing as a first step.

"We need to make testing as easy as getting your blood pressure at a drug store ... so that there's no barrier to testing," he says.

Lennox doesn't think that he'll see a cure by the end of his career, but he says people are working on it and many remain optimistic. One person has been cured, so Lennox says it is possible.

"We have the tools, but we don't have a blueprint or any construction equipment," he says. "We know where we want to go, but we don't know how to get there reliably."