Accessibility links
A Muslim Cemetery Helps To Ease Funerals' Strain At the Garden of Peace cemetery in Flint, Michigan, Muslims are buried in accordance with traditional Islamic burial rites. After operating for only a couple of years, the cemetery has already welcomed a diverse group of American Muslims. 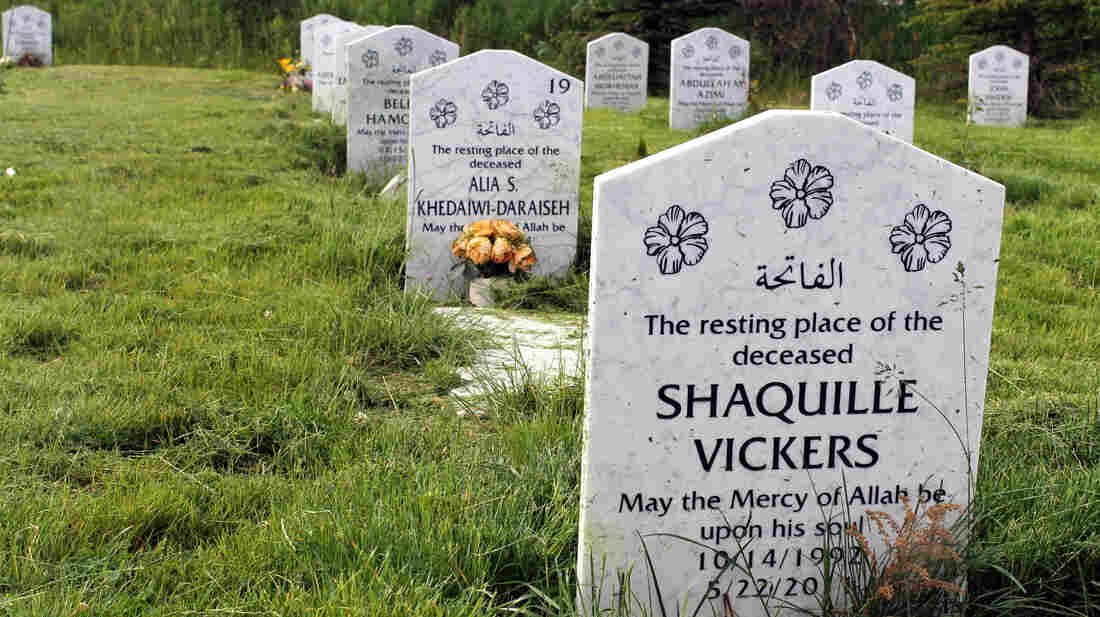 At the Garden of Peace cemetery in Flint, Mich., Muslims are buried in accordance with traditional Islamic burial rites. Sami Yenigun/NPR hide caption

The Garden of Peace cemetery opened when the Islamic community in Flint, Mich., needed a place to bury their dead in accordance with their religion. After operating for only a couple of years, the cemetery has already welcomed a diverse group of American Muslims.

Tucked in the left corner of an open field, on a breezy, buggy, warm summer morning in Flint, lie parallel rows of identical headstones. There are roughly 30 of them, all facing the same direction.

"When we put the body in the grave, we put them in a way that they are facing the same direction, facing east — which is the Kaaba, from here," says Abed Khirfan, managing director of the Flint Islamic Center. The Kaaba is the cube-shaped structure at the center of the Grand Mosque in Mecca.

Burying the dead to face the Kaaba is just one of the ways that the Garden of Peace cemetery observes traditional Islamic burial rites. It's also designed so that visitors can avoid stepping directly over a grave site, an act discouraged in religious texts.

"For every two rows of graves, there's a wider row for walking, for machinery and so on. So, we designed it that way."

Khirfan adds that burials take place as soon after a death as possible.

"It's not unusual [that] if you have somebody died 5 o'clock in the morning, they'll be buried by 1 o'clock in the afternoon, the same day," he says.

Before the Garden of Peace opened, Muslim families in Flint would often drive more than an hour, to cities like Plymouth or Dearborn, to bury their dead in "Muslim sections" of larger cemeteries.

"As you know, with a funeral procession, it's slow by nature. And then you get caught in a traffic jam or maybe construction. That's the problem we used to face."

Khirfan says that those hassles were painful for families at their most fragile, but that's all changed since the Garden of Peace opened.

"That really alleviated some of the problems to the family, and it became very convenient," he says. "And as a result, we have a very good turnout to bury. And that's honoring the dead, when you have more people come in and be able to be part of the ceremony."

Khaled Khirfan, Abed's son, is an active member of the Flint Islamic Center.

"The community is really thriving," he says. "We keep growing, year by year. We keep expanding. Just last year, we finished our high school and early childhood center. It's mind-boggling to imagine what we'll accomplish next year, as a growing community."

Indeed, the Islamic center and this cemetery are serving the life cycle of Muslims in Flint. The people buried in the new cemetery came from all corners of the globe — from Egypt, Sudan, Albania and Syria, for instance. There's also an American veteran of World War II buried here.

"You name it," say Abed Khirfan. "In almost 30 graves, we have maybe 10 different nationalities and backgrounds. So it's very diverse. And that's the beauty of Muslim functions, of Muslim facilities."

One of the members of this community, Khuloud Daraiseh, lost a close friend, an aunt and her mother in the past year and a half. They are all buried here. I asked her how she felt having her loved ones so close.

"I just feel — it's hard to explain," she says. "I talk to my mom, for my own comfort. I pray for the other deceased, and I pray for my mom. I just feel at peace."