Accessibility links
Jill Tarter: A Scientist Searching For Alien Life Jill Tarter works at the SETI Institute, where scientists seek evidence of extraterrestrial life in the universe by looking for some signatures of its technology. "The amount of searching that we've done in 50 years is equivalent to scooping one 8-ounce glass out of the Earth's ocean," she says. 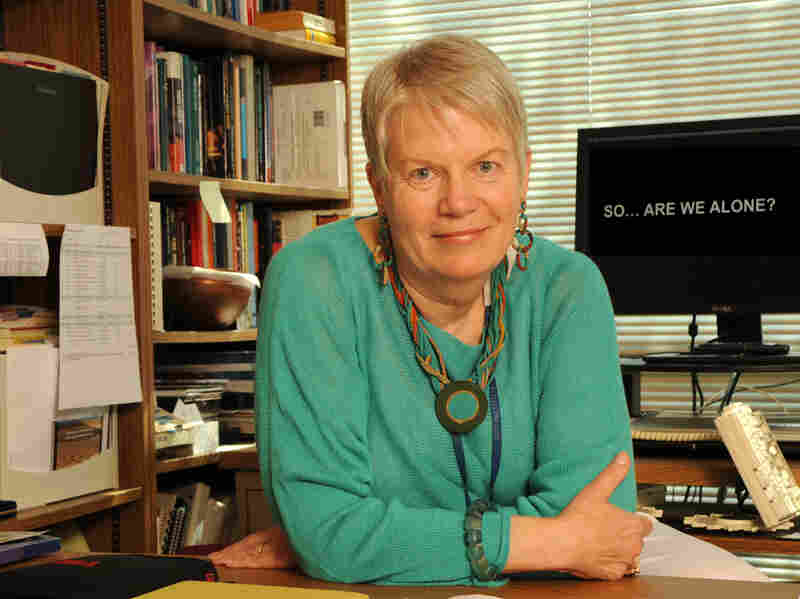 Dr. Jill Tarter has spent 35 years searching for extraterrestrial life in the universe. She has a Ph.D. in astronomy from the University of California, Berkeley. /SETI Institute hide caption 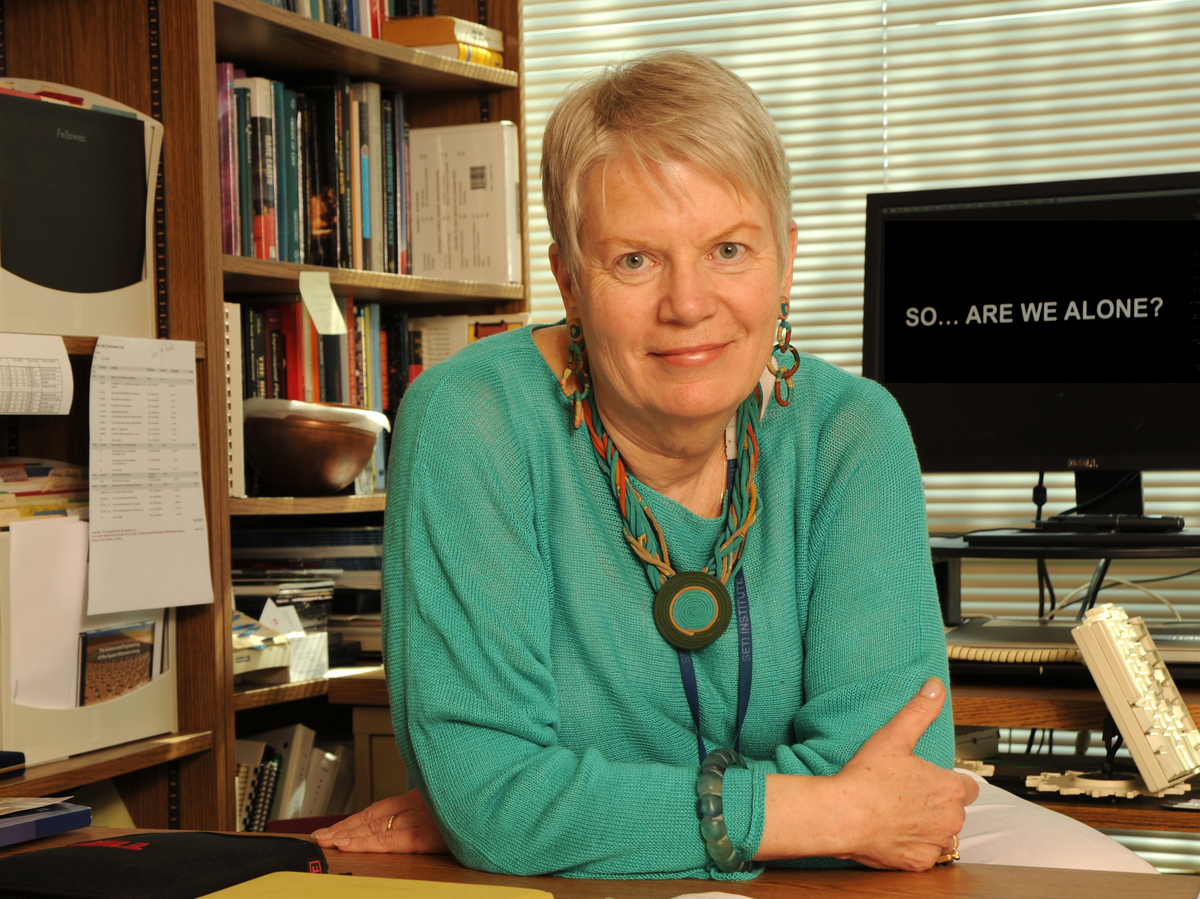 Dr. Jill Tarter has spent 35 years searching for extraterrestrial life in the universe. She has a Ph.D. in astronomy from the University of California, Berkeley.

As a child, astronomer Jill Tarter would walk along the beaches of western Florida with her father and look up at the stars.

"I assumed, at that time, that along some beach on some planet, there would be a small creature walking with its dad and they would see our sun in their sky, and they might wonder whether anyone was there," she tells Fresh Air's Dave Davies. "But I never thought about it professionally until graduate school."

In graduate school, Tarter worked on a project designed to search radio frequencies for clues about extraterrestrial life forms. The project, known as SERENDIP, was part of the Search for Extra-Terrestrial Intelligence (SETI) program based at the University of California, Berkeley.

Tarter got hooked — and has devoted her life to the search for extraterrestrial life. Over the course of her career at SETI, she's searched nearby star systems for signs of alien life and headed up efforts to create new telescopes to scan the skies for signals.

"We don't know how to identify intelligence over interstellar distances, so what we do instead is use technology for a proxy," she says. "And we say, 'Can we look or listen in any way that could detect technologies that someone else might be using and might be modifying their environment in ways that would be detectable over interstellar distances?' "

Her work at SETI has not gone unrecognized. Tarter has received awards from NASA, Time magazine and the American Association for the Advancement of Science. In addition, Carl Sagan's novel Contact was largely based on her work.

Tarter recently stepped down as the head of research at SETI to focus on fundraising efforts. But she says the search for intelligent life will continue.

"We've hardly begun to search," she says. "The space that we're looking through is nine-dimensional. If you build a mathematical model, the amount of searching that we've done in 50 years is equivalent to scooping one 8-ounce glass out of the Earth's ocean, looking and seeing if you caught a fish. No, no fish in that glass? Well, I don't think you're going to conclude that there are no fish in the ocean. You just haven't searched very well yet. That's where we are."

On how radio telescopes are used

"Pragmatically, to date, we're using radio telescopes to listen for signals that are generated either for their own purposes or they're beacons, intended to attract the attention of us on emerging, young technology in the galaxy. And at optical wavelengths, instead of looking for signals that occupy only narrow range of frequency, we look for signals that are broadband — flashes of light — that last for a billionth of a second or less. And we're constantly thinking about what's the next new technology that we might innovate which in turn could be a better way of looking for extraterrestrial technologies. We do reserve the right to get smarter and we certainly don't think we know all there is to know."

On the electromagnetic spectrum

"Radio astronomy, optical astronomy, gamma ray astronomy — they're all studying light. But light at different wavelengths — the shorter wavelengths, the higher frequencies. Those are the X-rays and the gamma rays and they speak and tell us about really energetic events in the cosmos — lots of explosions. The optical part of the spectrum — that light tells us about things that are 6,000 to 10,000 degrees in temperature. ... And the radio wavelengths — the longer wavelengths — there you study very cold matter. You study molecules and atoms and dust. So each part of the electromagnetic spectrum allows us to learn something different about the universe and about its physical properties. So radio wavelengths are just long, tired light."

On discoveries made while reviewing radio signals

"Early on in my career in France, I stayed awake for three days to prove a signal was a distant airport rather than something we were interested in because I thought my French colleague was going to call up Le Monde and tell them we found it. And another instance, I was at Green Bank, W.Va., and we had a second telescope in Georgia that helped us discriminate against our own technology. Unfortunately, this telescope got hit by lightning and we had three days to observe without it. And during that time, of course, we got a signal that was really interesting and we followed it for almost a whole day before we convinced ourselves that indeed, it was not coming from the star we had been tracking. It was a signal coming in from the sidelobes of the telescope. And this was a spacecraft that was orbiting the sun, and so was the planet Earth."

On our connection to the cosmos

We are the laws of chemistry and physics as they have played out here on Earth and we are now learning that planets are as common as stars. Most stars, as it turns out now, will have planets.

"We are made out of stardust. The iron in the hemoglobin molecules in the blood in your right hand came from a star that blew up 8 billion years ago. The iron in your left hand came from another star. We are the laws of chemistry and physics as they have played out here on Earth and we are now learning that planets are as common as stars. Most stars, as it turns out now, will have planets."

"If we detect a signal, even if there's no information — even if it's just a cosmic dial tone — we learn that it's possible for us to have a future — a long future. And that's because we couldn't possibly be successful with SETI unless technologies, on average, survive for a long time so that they can be lined up not just in three-dimensional space — close enough for us to find them — but in the fourth dimension, in time — so that they're transmitting as we're emerging."

On an error in the movie Contact, which was based on her life

"It's just before the first kiss, so Jodie Foster is out on the balcony behind the control room and they're looking at the stars and the beautiful telescope and she's doing, 'Oh, look at all of those stars. If only one in a million of those stars had planets, and only one in a million of those planets had life, and if only one in a million of those lifeforms were transmitting, there would be millions of signals for us to detect.' The math is all wrong. It's really annoying. There are 100 billion stars in the Milky Way galaxy. And even if she was looking up and seeing them all, which she wasn't, she's multiplying 1011 * 10-18 and coming up with 106. That's wrong by 13 orders of magnitude. And the really sad story is that Carl Sagan died while this movie was being edited. And there was a memorial service for Carl in the spring. And [someone] wanted to show the assembled scientists and engineers a clip from the film. ... So [the kiss clip] is the clip that's shown, and you hear this gasp at the end from all the scientists and engineers who can obviously do the math and know it's wrong."