Accessibility links
Silicon Valley Boot Camp Aims To Boost Diversity By a recent estimate, 1 percent of America's technology entrepreneurs are black. And only 8 percent of tech companies are founded by women. A new boot camp aims to give these entrepreneurs pointers so they can get their startups off the ground. 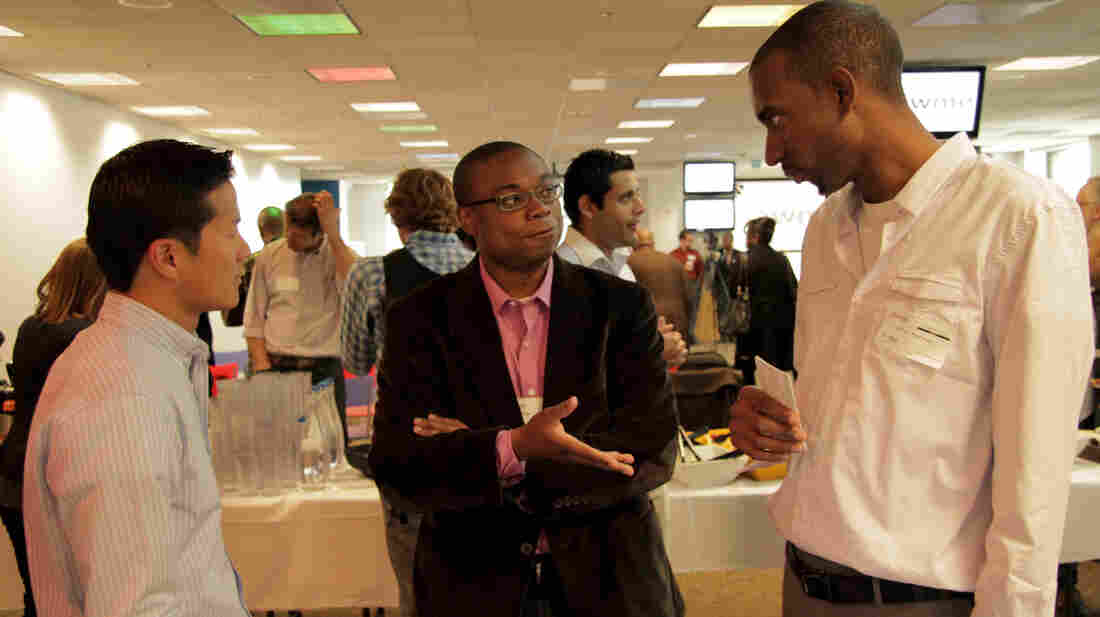 If there is a founding ethos in the world of high-tech startups, it's this: The idea is everything. Facebook's initial public offering might have seemed like the perfect illustration. A simple concept, conceived by a college student, became a $100 billion empire in just 8 years.

But if you look around California's Silicon Valley, ideas all seem to be coming from the same kinds of people. By a recent estimate, 1 percent of technology entrepreneurs are black. Only 8 percent of tech companies are founded by women. Facebook's Mark Zuckerberg isn't just a model of success in the Valley; he's a blueprint.

Making Their Pitch In Silicon Valley

The New Media Entrepreneurship boot camp trains startup hopefuls to focus their business ideas and present them to investors. Some recent participants:

Seizing Opportunities, From An Early Age

It may be safe to say that some people are just born entrepreneurs. Take Chris Lyons of Johns Creek, Ga., outside Atlanta. When he was 12, he started mowing lawns.

"I'd take my mom's trash can and I would take my lawn mower," he says. "And I would push my lawn mower up and down the hill with one hand, and carry the rolling trash can for the other. I had over 30 lawns in my neighborhood. Then I bought a John Deere tractor."

Someone like that isn't going to stay in John's Creek forever. By the time he was 25, Lyons had set his sights on Silicon Valley.

"There's no other choice," he says. "Like, I want to be in an area that nurtures strong-willed, forward-thinking individuals. And there's no better place than Silicon Valley or San Francisco."

The thing is, when you look at Silicon Valley, especially at people who are starting businesses, they don't typically look like Chris Lyons, who is black.

And that is the whole point of the three-week boot camp for startups called NewMe, for New Media Entrepreneurship.

On the first day of the camp, Lyons is sitting in the living room of a San Francisco townhouse, along with six other entrepreneurs — all women or African-Americans, most of them in their early 20s.

Everyone here came with business ideas. Lyons' company is called PictureMenu, which he hopes will eliminate paper menus.

The idea behind the boot camp is that when it attracts people like Lyons to the area, it also helps nudge Silicon Valley toward diversity.

And that, says venture capitalist and consultant Freada Kapor Klein, is something the Valley badly needs.

Klein says it's human nature: People tend to help people who look like them and who come from similar backgrounds. It's largely subconscious.

"We're not even aware of that hurdle that we've put in the place of a different kind of entrepreneur," she says.

Klein sees the NewME program as a two-way street because without diversity, the industry — and consumers — are missing out.

"If we've got a very insular world, then the kinds of companies that are created — most scratch the itch of a particular set of people and ignore everyone else," she says. "And I think that's the real loss for everybody."

Trouble With The Pipeline

One reason Silicon Valley is so homogenous is what's called the pipeline issue. There just aren't a lot of women, blacks and Latinos enrolling in science and engineering programs.

But there are subtler forces at work, too.

"No one's gonna say, 'I'm not gonna fund you cause you're black,' " says Chris Bennett, a NewME alum who is now a working entrepreneur. "No one's dumb enough to say that. But everyone will tell you that there is a bias."

"I think for some people it's sort of like a chicken-and-egg issue," Ukuku says.

"They've never seen a successful black entrepreneur, so it's hard for them to envision it. But then, they do exist ... it's just a mess."

It's a mess because tangled up in all of this are roadblocks that women and people of color often put in front of themselves.

Take, for example, NewME participants Rachel Brooks and Amanda McClure. One day I asked them why instead of NewME, they hadn't applied to a different, more established program, one that wasn't based on race or gender.

And when I asked them this, they seemed kind of stumped.

"I don't know, maybe it just felt a little out of reach," Brooks says.

"Maybe that's what it was," Brooks says.

"It wasn't in my realm of conception, you know?" McClure adds.

"That's a much deeper issue," says Ukuku, with a sigh and a laugh.

She's laughing, she says, because she hears this all the time. It's the mindset, Ukuku says, that people have to be brilliant, at the top of their game, to even take a stab at Silicon Valley success.

"And the people that sort of have that tendency to say that tend to be women and minorities," she says. "Whereas I'll talk to some of my friends who I adore, who don't fit into one of those two buckets, and they'll say: 'I got an idea. I'm going for it.' "

Ukuku says she recognizes this confidence because she's seen it among her own relatives back in Nigeria.

"They're the majority in that culture," she says. "There's just an assumption that you will, like — why would you not succeed?"

Campers Pay A Visit To Google

That confidence of belonging is exactly what the NewME participants are trying to cultivate on the program's second day.

They're at the Google headquarters in Mountain View. And guess what? It's exactly the dot-com fantasy everyone imagined it would be. Lyons sounds giddy.

"I just walked outside, and they're playing pool and drinking coffee," he says. "And I saw a yoga session when we walked in here."

But Lyons is nervous, too. Tonight is a bit of an initiation: An American Idol-style pitch session.

At the event, the emcee is Navarrow Wright, an established entrepreneur in the Valley.

"What we're going to do tonight is give the NewME founders an opportunity to pitch their companies for the first time in public," he says. "They will have two minutes to pitch their startup, and we will each have one minute to give feedback."

Making A Pitch To Investors

When it's his turn, Lyons walks up to the lectern and flashes a winning smile at the audience.

"How's everyone doing today? Good, good. Well my name is Chris Lyons and I am the founder and CEO of PictureMenu."

He starts out pretty strong.

"And what we do is we allow any restaurant the opportunity to transform your boring paper menu into a beautiful mobile application for your smartphone, for free."

But after that, things get a little muddy, as Lyons compares the service to the way you can upgrade a car. After he wraps up, the critique begins. One of the judges is Chris Genteel, Google's development manager for global diversity.

"It was a great first half of the pitch and the second half kind of went off the rails," he says.

As Genteel goes on, Lyons' face falls a bit.

"I think you gave me a lot of ideas in the beginning," Genteel says. "And then confused me with a lot of kind of features."

For Lyons and the others, it's just a starting point. They've got three months of training ahead of them. And their pitches are all going to need some work.