Accessibility links
In 'Free' Syrian Village, A Plea For U.S. Help While the Syrian government still has the upper hand in the country's largest cities, the rebels hold large swaths of territory in rural areas. NPR's Kelly McEvers recently returned from a week with the rebels inside Syria. Her first stop: a rebel way-station not far from the border with Turkey. 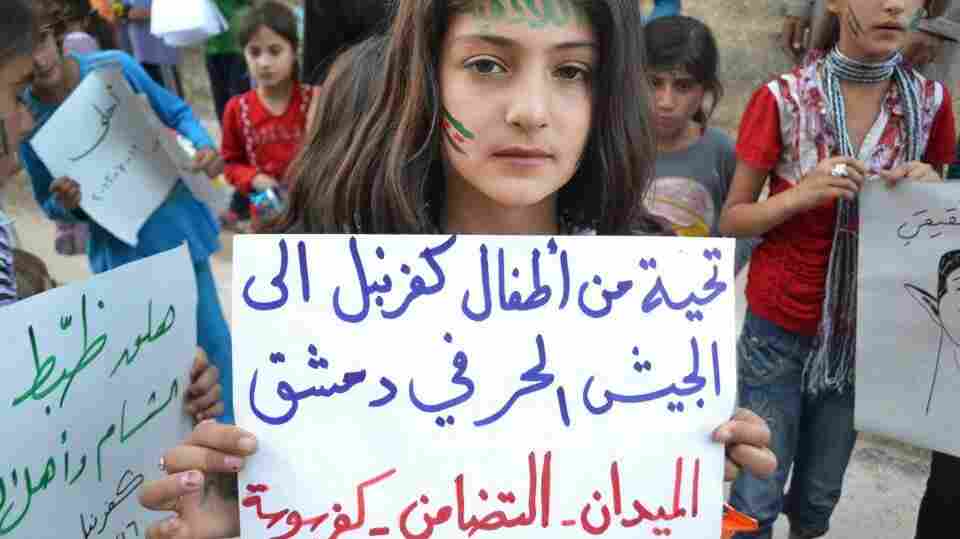 In this image taken July 16 and provided by Edlib News Network, a Syrian girl holds a poster that reads, "Greetings from Kfarnebel's children to the Free Syrian Army soldiers in Damascus," during a demonstration in Kfarnebel, Syria. Rebels hold large swaths of territory in rural Syria. Fighters in the village of Atima recently launched their first operation against the regime. AP hide caption 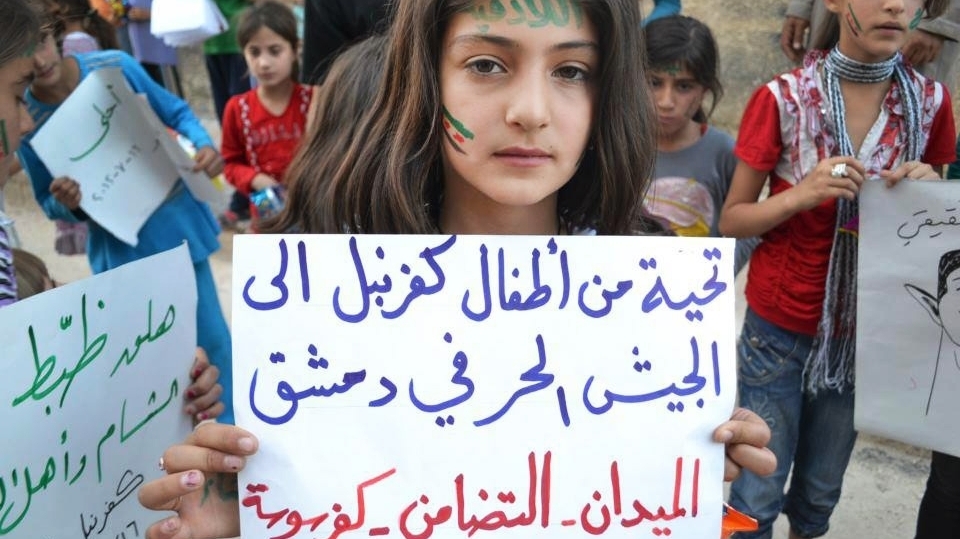 In this image taken July 16 and provided by Edlib News Network, a Syrian girl holds a poster that reads, "Greetings from Kfarnebel's children to the Free Syrian Army soldiers in Damascus," during a demonstration in Kfarnebel, Syria. Rebels hold large swaths of territory in rural Syria. Fighters in the village of Atima recently launched their first operation against the regime.

It's sunset in the village of Atima. The old police station clearly was part of the government at one point. The police basically left and now the police station itself is a headquarters for the rebels.

The flag on top of the police station is no longer the Syrian flag, but the flag of the revolution. It's a bit in tatters, but it's still there.

Inside the police station, Syrians line up to meet a local commander named Zaza, who sits at the only desk in the room. He's small, wears camouflage pants and an ammo vest with a grenade on the right, a pistol on the left. His long hair and long beard are black-and-silver. He combs them a lot.

The people who have come to see Zaza are either leaving Syria or coming into the country. They have to pass through this village on their way.

One man's father just defected from the Syrian army and escaped to Turkey. Now the rest of the family is asking Zaza's help to get out of Syria, for fear President Bashar Assad's regime will punish them. People coming in could be anyone from journalists to medics to fighters to gunrunners.

The village has been "free" for many months now. The sense is that the Syrian army is too stretched fighting rebels elsewhere in the country to retake control, and that the Turkish military, perched just on the other side of the border, is providing unofficial cover. That plus the mountainous terrain and presence of other rebels groups nearby gives this village a confidence that it will remain in rebel hands.

It was this confidence that sparked the rebels here to launch their first ever operation against the regime last week, on an army checkpoint just north of here. The regime's army fought back, though. The rebels lost eight men and retreated.

Inside the rebel headquarters, the men waiting to talk to Zaza grill me about why the U.S. isn't doing more to help the rebels hold this territory and topple Assad's regime.

You can't send troops, you can't enforce a no-fly zone, they say. We know that. But why not send more weapons? The rifles and rocket-propelled grenades we're getting from Gulf countries like Saudi Arabia and Qatar are not enough, they say. Why not help us coordinate our operations, like NATO advisers did in Libya?

One resident later tells me he has seen two undercover Americans passed through here. He says one gave the rebels a couple of high-end sniper rifles. The other was interested in the types of helicopters used by the Syrian regime.

Later that night, I go to where the women of the village are sitting in mourning for one of the men lost in the checkpoint operation. It's the first time a rebel from this town has died in a firefight.

The man's young wife sits with a blank look on her face, her 2-year-old son splayed on the floor, fitfully sleeping. When I ask for the dead man's name, his steely sister says it as if she wants the world to hear, and then breaks down.

A young girl who's volunteered to translate asks me the same question the rebels asked in the police station: Why won't anybody help us?

I tell her it's complicated. I say I don't speak for the U.S. government, but I do know that many people don't want to see the U.S. get mired in another Iraq or Afghanistan. I feel like I'm saying something totally normal, but it shatters the girl. She starts to cry and can't stop. She eventually tells the other women in the room what I said.

The text below reflects an updated version of this story, which aired on All Things Considered on July 23, 2012 (and can be heard here). It clarifies that Kelly McEvers prefaced her response to a question by relatives of the Syrian rebels by saying she was not speaking on behalf of the U.S. government.