Accessibility links
It's Deja Vu As Pakistan's Political Crisis Deepens Pakistan's Supreme Court has given the prime minister until Wednesday to ask Swiss authorities to reopen an old corruption investigation of President Asif Ali Zardari. The premier has refused, and the court is threatening to find him in contempt of court and remove him — as it did his predecessor. 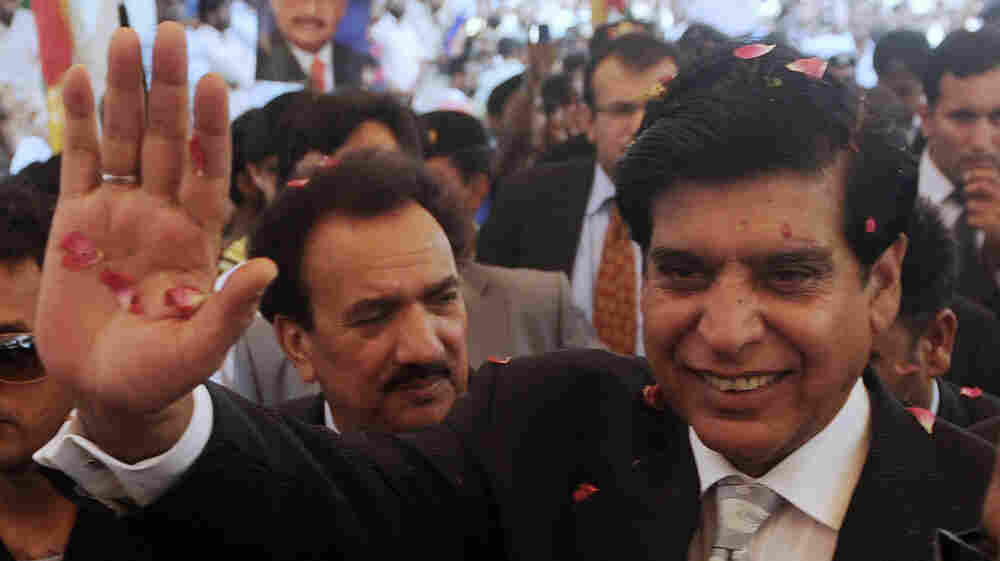 Pakistani Prime Minister Raja Pervez Ashraf is greeted after his election in June. Just weeks later, many Pakistanis expect the nation's Supreme Court may soon attempt to force Ashraf from his position, as it did his predecessor. Rizwan Tabassum/Getty Images hide caption 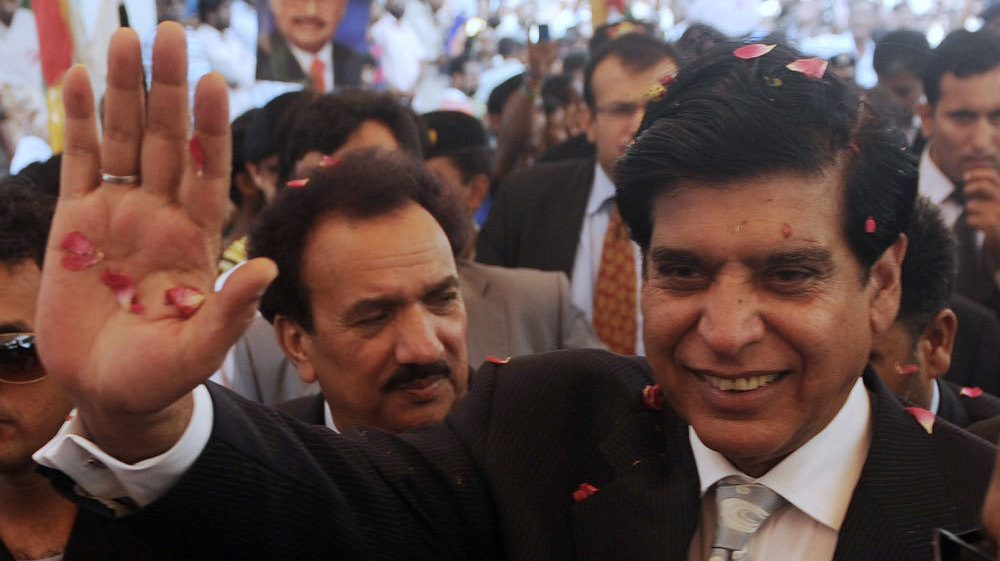 Pakistani Prime Minister Raja Pervez Ashraf is greeted after his election in June. Just weeks later, many Pakistanis expect the nation's Supreme Court may soon attempt to force Ashraf from his position, as it did his predecessor.

An ongoing political crisis has left Pakistan's government paralyzed and near collapse, as the country's Supreme Court attempts to revive corruption charges against the president in an apparent effort to force his resignation.

Some time ago, the government of Switzerland opened an investigation into Zardari's financial dealings, but the case was closed with no action taken.

But Pakistan's Supreme Court has Zardari in its sights. This spring, the court instructed then-Prime Minister Yousuf Raza Gilani to write a letter to the authorities in Switzerland, requesting the corruption case be revived.

Gilani, who owed his position to Zardari, refused. In response, the Supreme Court in June found the prime minister in contempt of court and forced his removal.

But the turmoil didn't end with Gilani's ouster. A few weeks ago, the process started all over again. This time, the Supreme Court directed the new prime minister, Raja Pervez Ashraf, to request, in writing, that Swiss authorities reopen the case against Zardari.

The court has given Ashraf until July 25 to comply. If he fails, the court has pledged to take action against him.

The ongoing struggle has opened up deep fissures in Pakistan's political class. While many Pakistanis maintain profound respect for the Supreme Court and its justices, political analyst Ayesha Siddiqa says there are serious doubts about the action it has taken.

"The Supreme Court of Pakistan is judicial activism gone completely out of control," Siddiqa says.

Even some who believe President Zardari is guilty of corruption have trouble backing the court.

"I'd like to force the president to resign, frankly," says retired Pakistani Army Brig. Shaukat Qadir. "He's a disgrace to me. But I don't think this is the way to do it."

Two weeks ago, President Zardari made his next move. He rammed a contempt-of-court bill through both houses of Pakistan's Parliament, where his Pakistan People's Party enjoys majority control.

While most likely unconstitutional, the Contempt of Court Act is designed to protect Zardari and other senior officials from the actions of the Supreme Court by exempting them from contempt of court proceedings.

Now, the nation is holding its breath to see what will happen when the deadline for Ashraf to submit the letter to Switzerland expires this week, says Tariq Mehmood, a lawyer practicing before the Supreme Court.

"One thing is very clear. They expressly replied that they will not write a letter," Mehmood says. "But I think it will not be so easy for the Supreme Court to send the second prime minister home."

Doing so would only paralyze the government further — and convince more people that civilians are not capable of governing Pakistan.

Rumors have begun flying that the military may be tempted to seize power once again, as it has done several times since Pakistan gained its independence from Britain in 1947.

Eyes On The Court — And The Military

Some Pakistanis are concerned about the military stepping in, but others, like Muhammad Ziauddin, the executive editor of the Express Tribune newspaper, are not.

"No I'm not worried," Ziauddin says. "The Supreme Court has declared on a number of occasions that they don't want to see any extra-constitutional solution to the crisis."

But that wouldn't preclude the military leadership from exercising even more influence from "behind the curtain," as they say here.

Among the solutions that may be under consideration is the creation of a caretaker government, and possible early parliamentary elections before the regularly scheduled election next March.

Whatever form it takes, pressure to solve the political crisis is growing. After all, Pakistan is facing serious problems — constant power outages, persistent terrorist attacks in the tribal areas near Afghanistan, and violent insurgent movements spreading into the provinces of Punjab and Baluchistan.

Finding solutions to these problems is nearly impossible while the key players in the government are at each other's throats.