Accessibility links
Politicians Shy Away From New Gun Control Efforts In the days since the movie theater shooting in Aurora, Colo., there's been little discussion of the laws that allowed the gunman to acquire his arsenal. National politicians in both parties are generally wary of offending the powerful gun lobby. 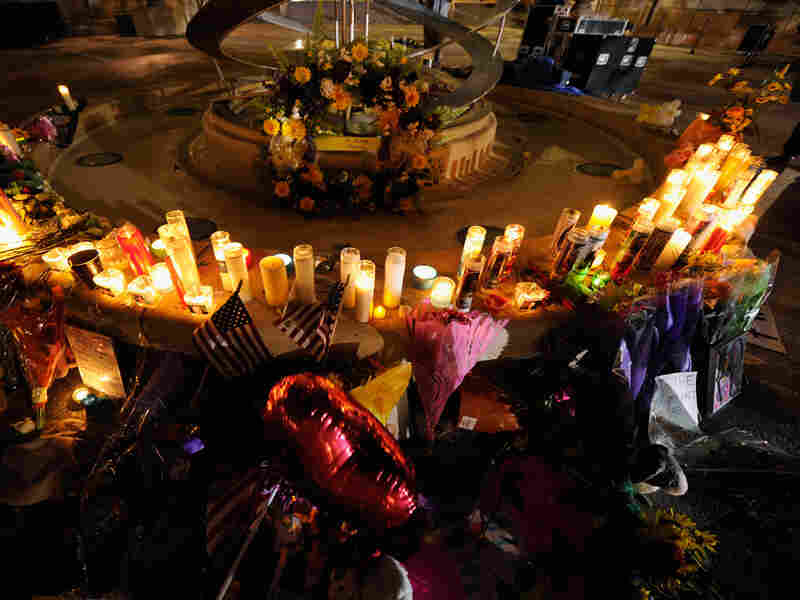 Mourners create a memorial at the fountain of the Aurora Municipal Center after a prayer vigil Sunday for the 12 victims of Friday's mass shooting at the Century 16 movie theater. Kevork Djansezian/Getty Images hide caption 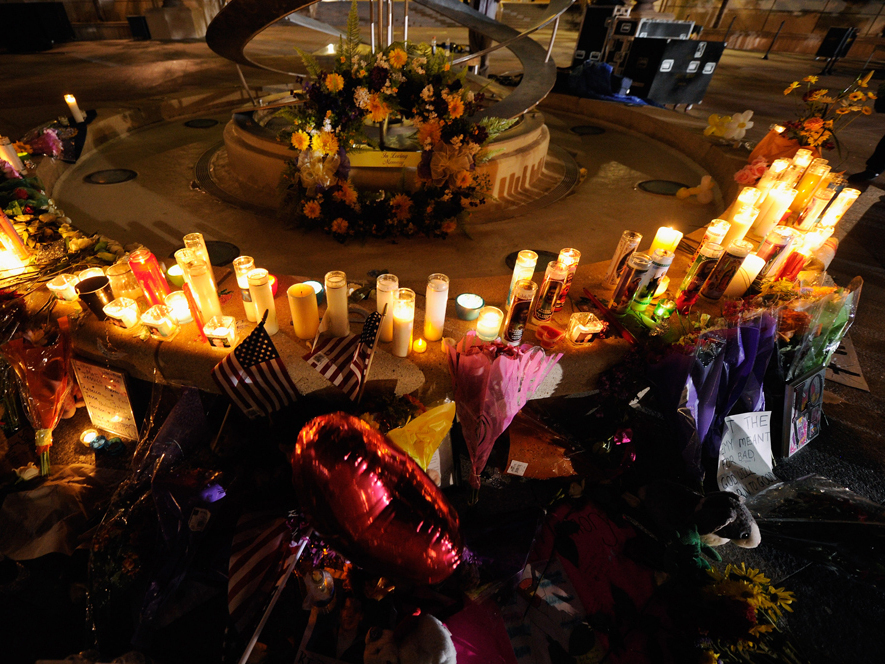 Mourners create a memorial at the fountain of the Aurora Municipal Center after a prayer vigil Sunday for the 12 victims of Friday's mass shooting at the Century 16 movie theater.

In the days since the movie theater shooting in Aurora, Colo., there's been little discussion of the laws that allowed the gunman to acquire his arsenal.

Authorities say suspect James Holmes, who was arrested at the scene of the shooting that killed 12 people and wounded dozens more, was armed with a modified assault rifle, two pistols, a shotgun and thousands of rounds of ammunition.

Colorado Gov. John Hickenlooper, a Democrat, told CNN this weekend that the guns are not the problem.

"If there were no assault weapons available, if there were no this or no that, this guy's going to find something, right?" Hickenlooper said. "He's going to know how to create a bomb. Who knows where his mind would have gone."

'Doing The Things We Can Do'

When President Obama met with the families of the shooting victims over the weekend, he said he wanted to let them know that all of America is thinking of them.

"I hope that over the next several days, next several weeks, and next several months, we all reflect on how we can do something about some of the senseless violence that ends up marring this country," he said.

The president didn't elaborate on what that "something" might be, and he said nothing at all about guns. Last year, in the aftermath of the Tucson, Ariz., shooting spree that killed six people and wounded 13, including U.S. Rep. Gabrielle Giffords, Obama penned an op-ed article that basically called for better background checks.

"He believes we need to take steps that protect Second Amendment rights of the American people but that ensure that we are not allowing weapons into the hands of individuals who should not, by existing law, obtain those weapons," Carney says.

But nothing in the president's proposal would have prevented the suspected Aurora gunman from legally buying his guns. Unlike the suspects in Tucson or the 2007 massacre at Virginia Tech, Holmes had no documented record of mental illness, as far as is known.

Carney says while Obama supports a renewed ban on assault weapons, he has little hope of passing it.

"As you know, there has been opposition to that since it expired, within Congress," Carney says of the 1994 law that expired in 2004. "So the president is focused on doing the things we can do."

National politicians in both parties are generally wary of offending the powerful gun lobby led by the National Rifle Association. Republican presidential candidate Mitt Romney supported an assault weapons ban as governor of Massachusetts, but in this campaign he says no new laws are needed.

It's different in some of the nation's big cities. New York Mayor Michael Bloomberg has been an outspoken advocate of gun control. After the shootings on Friday he said that Obama and Romney both need to offer more to the victims than soothing words.

"Everybody always says, 'Isn't it tragic?' ... There are so many murders with guns every day; it's just got to stop," he said.

Bloomberg says if politicians won't take the lead, ordinary citizens may have to.

"If it was one of your kids in Aurora, maybe you'd stand up and say, 'I'm not going to take this anymore,' " he said.

That's what happened to Tom Mauser. His son Daniel was among those killed in Colorado's Columbine high school massacre 13 years ago. Since then, Mauser has become a gun control activist. But these days he feels like he's fighting a losing battle.

"Obviously, this country has somewhat accepted its fate. It may not be happy with it, but [it has] just kind of, in a depressing kind of way, has accepted this level of gun violence. Decided there's nothing that it can do," he says. "There is no single thing you can do. There's no one law that will change this. But that is not a reason for not working on this problem."

At his nominating convention in Denver four years ago, Obama cited gun control as one of the areas in which common sense ought to be able to overcome partisan differences.

"The reality of gun ownership may be different for hunters in rural Ohio than they are for those plagued by gang violence in Cleveland," he said. "But don't tell me we can't uphold the Second Amendment while keeping AK-47s out of the hands of criminals."

Friday's rampage in Aurora and the reaction to it suggest that so far, that middle ground is still elusive.