Accessibility links
Ryan Offers Romney Risk, Reward Among those on Mitt Romney's list of potential running mates, Rep. Paul Ryan of Wisconsin has youth and experience. He's a conservative from a swing state, and he has big ideas and the policy chops to back them up. But the House Budget Committee chairman's fiscal ideas might cost Romney with independents. 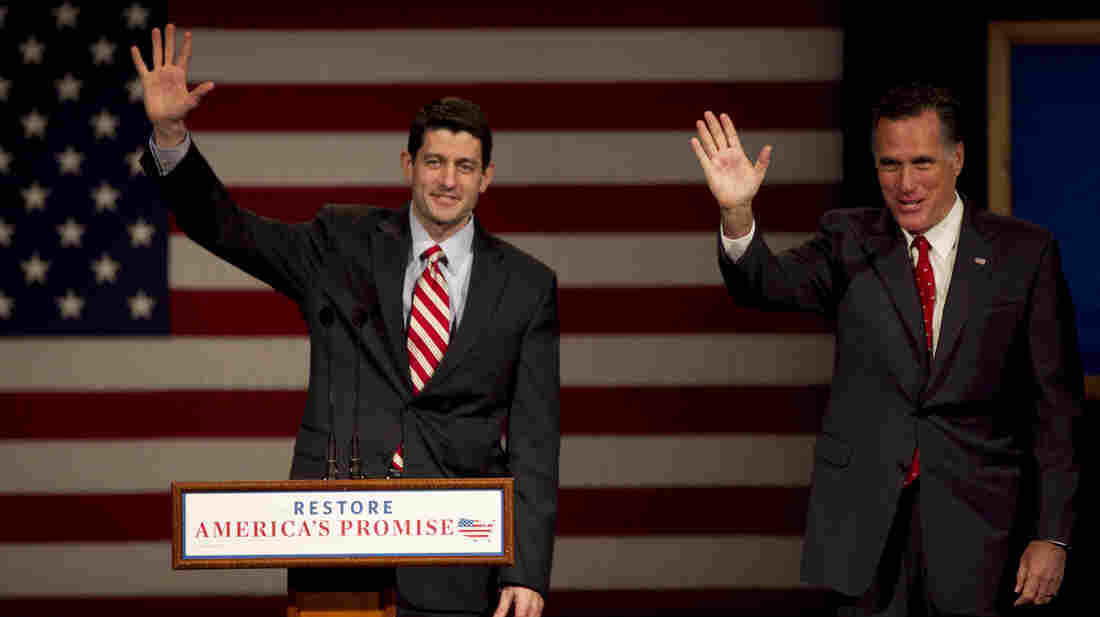 Among those on Mitt Romney's list of potential running mates, Wisconsin Rep. Paul Ryan has youth and experience, he's a conservative from a swing state, and he has big ideas and the policy chops to back them up.

But the chairman of the House Budget Committee would not be the safest of choices.

Back in February, when the Republican primary was still in full swing and the party's right wing was conspicuously unhappy with the idea of Romney, tax hawk Grover Norquist spoke to the Conservative Political Action Conference.

"We are not auditioning for fearless leader," said Norquist. "We don't need a president to tell us what direction to go. We know what direction we want to go. We want the Paul Ryan budget, which cuts spending $6 trillion."

That kind of enthusiasm is something Romney could use — a boost from a conservative darling like Ryan.

Ryan's pedigree is strong. He worked on the staffs of Kansas Sen. Sam Brownback and the late Republican luminary Jack Kemp. He won his own seat at 28, which means that now, at 42, he's a seasoned legislator.

But it's Ryan's ideas that first catapulted him into political stardom. The budget plan he introduced in 2010, or the "road map," as he called it, ignited a major debate within Congress.

"The road map gives you universal access to affordable health insurance for every American, and it makes Medicare and Medicaid and Social Security permanently solvent," Ryan said in an interview with then-PBS host Charlie Rose. "We can't have these entitlements designed like they are right now."

Ryan's budget was instantly controversial. It called for sweeping cuts to social programs, and, most troubling for seniors, would have changed Medicare from a guaranteed benefit to a voucher program.

Still, Republicans lined up behind it and rode the plan to a sweep of the House, giving Ryan the chairmanship of the Budget Committee. Within a few months, the House passed the Ryan budget (although the Senate did not).

That's the kind of energy a Romney candidacy could use. But interestingly, the very thing that makes Ryan a Republican star makes him deeply troubling to others.

Last year, fresh from the House vote that passed his budget, Ryan met angry constituents outside a town hall meeting in Kenosha, Wis. Inside the meeting, Ryan tried to explain his budget's cuts to future Medicare benefits and its lower corporate tax rates, but was interrupted by protesters.

This is the real danger for Romney if he were to pick Ryan — igniting the anger of voters who favor a stronger safety net, including seniors and many independents.

Ryan's plan would slash social spending — from Head Start to health care — while cutting taxes on businesses and the wealthy. The Obama campaign has seized on this, calling the plan the "Romney-Ryan budget."

There's some evidence that narrative could work for Democrats.

In a 2011 special election in upstate New York, Democratic Rep. Kathy Hochul ran ads against Republican Jane Corwin, ads targeted at independents linking Corwin to Ryan's budget plan. The ads worked. The Democrats picked up a seat that had been owned by the GOP for 40 years.

Now, even some Republicans are running against the Ryan plan, like Montana Rep. Denny Rehberg, a Senate candidate. A recent pro-Rehberg campaign ad notes that he "refused to support a budget plan that could harm the Medicare program so many of Montana's seniors rely on."

So, while it's true that Ryan could boost enthusiasm in the GOP, that might come at too high a price. That is, firming up the Democrats' narrative about Romney — that he's more concerned with business and wealth than he is about people.