Accessibility links
Whistle-Blower Law Unlikely To Help Italy's Migrants Italy's government has passed a law that would grant work and residence permits to illegal migrants who report exploitive employers. But the economic crisis means the law is unlikely to be effective, as desperate migrants compete for limited work and the illegal economy grows. 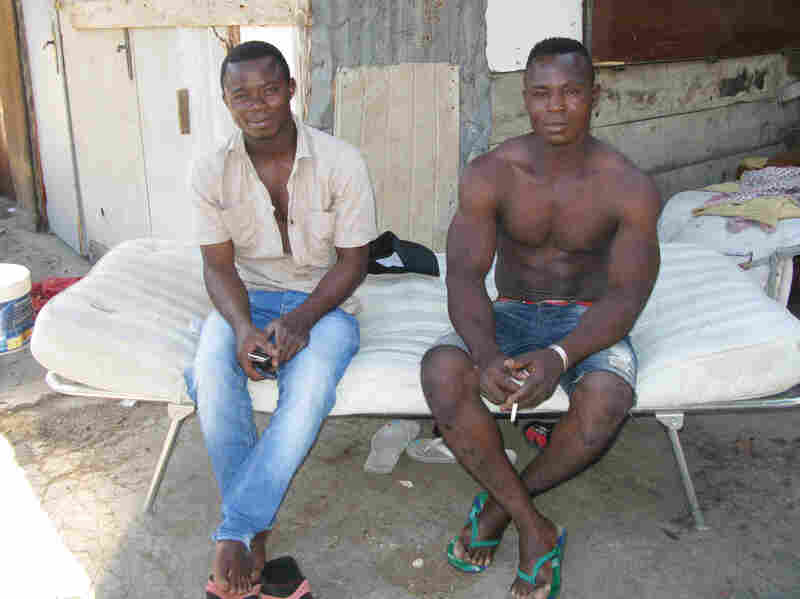 African migrants fired from Italian factories in the north have joined the swelling ranks of people searching for agriculture work in the south. Originally from Burkina Faso, Karim Suruku (right) is a migrant worker in Calabria in southern Italy. At left is Amidou Denamidou. Sylvia Poggioli/NPR hide caption 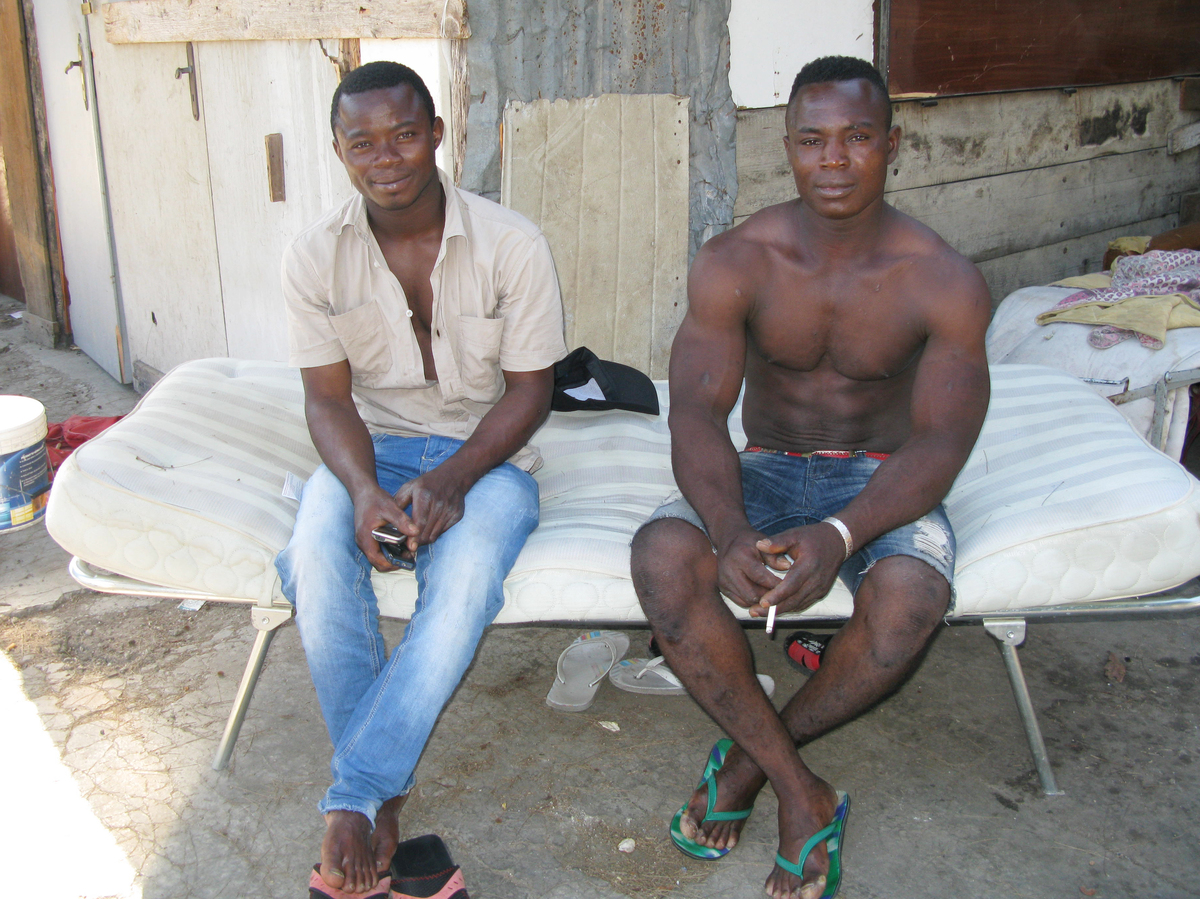 African migrants fired from Italian factories in the north have joined the swelling ranks of people searching for agriculture work in the south. Originally from Burkina Faso, Karim Suruku (right) is a migrant worker in Calabria in southern Italy. At left is Amidou Denamidou.

Italy recently approved a decree that would grant work and residence permits to migrants who blow the whistle on bosses who exploit them in the economy illegally.

But in places like the southern region of Calabria, the law has little chance of being applied at a time when the economic crisis increasingly fosters an illegal, underground economy.

The main activity in Calabria is agriculture. Thanks to vast citrus fields, it's one of the major stops for migratory workers, mostly Africans without legal documents.

They usually arrive in the town of Rosarno in the fall, in time for the orange and tangerine harvests. But it's midsummer and hundreds are already here, hoping for some meager work in the fields.

A drive through the valleys around Rosarno is a contrast in images — lush citrus trees and olive groves dotted with dilapidated shacks and abandoned houses where migrant workers live in subhuman conditions.

One such house has no running water, electricity or window panes.

In the scorching midafternoon sun, several men are stretched out on makeshift cots. Yaya Gabbe, 27, is from Burkina Faso. He's been in Italy for 12 years and speaks the language.

"I used to work in a factory near Milan," Gabbe says. "Then the crisis came and I lost my job, so I came down south to find something to do. There's no work left for anyone in the north." 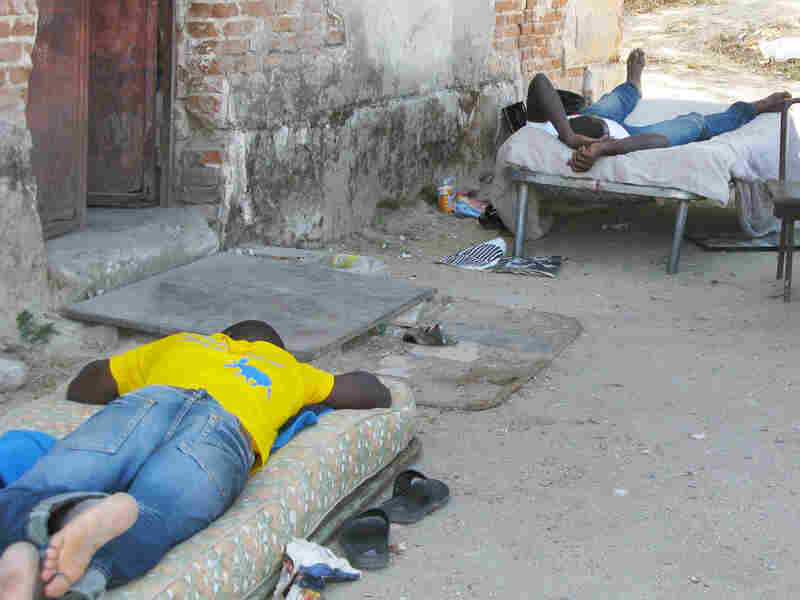 Men on cots wait for farm work near Calabria. Poor living conditions for migrant workers, sometimes without running water or toilet facilities, has led the Italian government to set up tents for them. Sylvia Poggioli/NPR hide caption

By losing his job, Gabbe lost his permit to remain in Italy legally and joined the swelling ranks of hundreds of thousands of illegal workers, many of whom are exploited in what immigrant-rights activists call semi-slave conditions.

In Calabria, a migrant worker can make at most $30 working a 14-hour shift.

A few miles away, makeshift shacks in a cactus field have no toilet facilities. The scene at this shack is similar, with men stretched out on cots, hoping someone will come to offer a day's work.

"We have no documents, nothing; can't go to another town, they'll ask for papers," says Karim Suruku, who is also from Burkina Faso. "So we stay here because they know us, we might find a little work."

The town of Rosarno made international headlines in 2010 when migrant workers rioted over their miserable pay and living conditions.

But two years later, they keep coming back, and always in bigger numbers, laid off from factories in the north.

The growing wave of migrants alarmed Prime Minister Mario Monti. Shortly after he came to power last fall, his government set up a tent camp that provides migrants with a place to sleep.

The tents are stamped with the words "Ministry of the Interior," and yet the residents are all illegal. Authorities have to look the other way.

Audu Baturi, 27, arrived after a long odyssey from his native Niger through Libya and a dangerous journey on a rickety boat to Italian shores.

He is confused by rumors about the new law that could help him get work and residence permits for reporting abusive treatment by employers. He says he's heard that it costs 1,000 euros to obtain the documents. 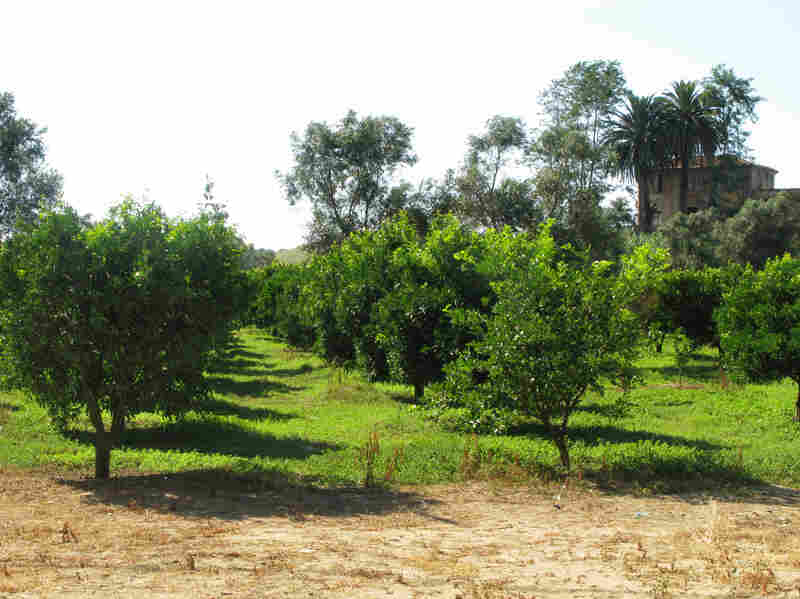 With its vast citrus groves, Calabria is a major stop for migratory workers in the country. Sylvia Poggioli/NPR hide caption

"Where can you get it?" Baturi says.

The new law does not require payments to get permits but does pose many problems.

A Moldavian field worker sitting on a Rosarno park bench dismisses the idea of blowing the whistle on someone who gives him work. "Say I report my employer to the police, then who's going to give me a job?" the man, who refused to give a name, says.

Rosarno Mayor Elisabetta Tripodi, elected on a progressive civic slate, is also skeptical that the new legislation can be applied. She says the worse the economic crisis, the more the illegal economy takes over.

"The crisis in agriculture is getting worse and worse," Tripodi says. "Just imagine a farmer gets paid 7 cents a kilo of oranges. But his production costs are 16 cents. So, of course, the illegal economy is a problem, but today the only way to find a job in agriculture is to get paid under the table."

Nino Quaranta, a farmer and migrants'-rights activist, laments that the economic crisis is making the job market in southern Italy increasingly precarious for both migrants and Italian citizens. He is worried about the spread of the illegal economy "because the illegal economy strengthens organized crime which flourishes in the underground."

A law meant to help improve the lot of migrants is seen as abstract and inapplicable.

Calabria is one of Italy's poorest regions. Its unemployment has long been at 30 percent. With the economic crisis devastating the country, the illegal economy is rapidly expanding as one of the few means of survival.