Accessibility links
When The Ship Comes In To Brownsville, Rip It Up Over the past two decades, the landlocked city of Brownsville, Texas, has become the hub of the U.S. ship recycling industry. Ships from tankers to aircraft carriers are dismantled and stripped of reusable metals. And despite the world economic slowdown, it's still a highly lucrative business. 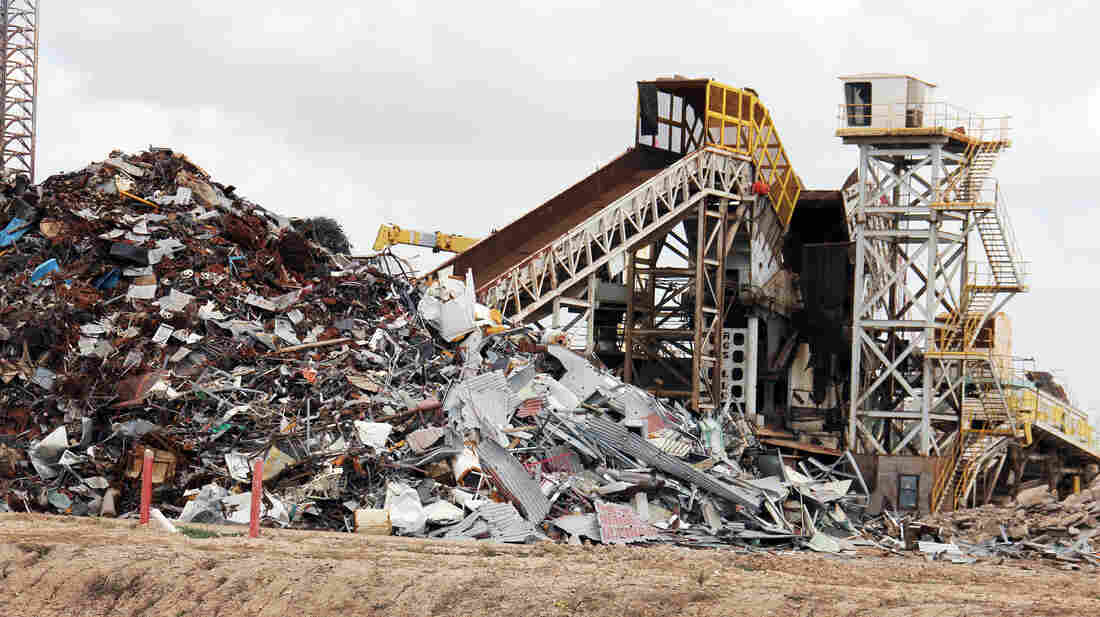 An industrial shredder at International Shipbreaking Ltd. in Brownsville, Texas. The landlocked city has become the hub of the U.S. ship-recycling industry. Michelle Lopez for NPR hide caption 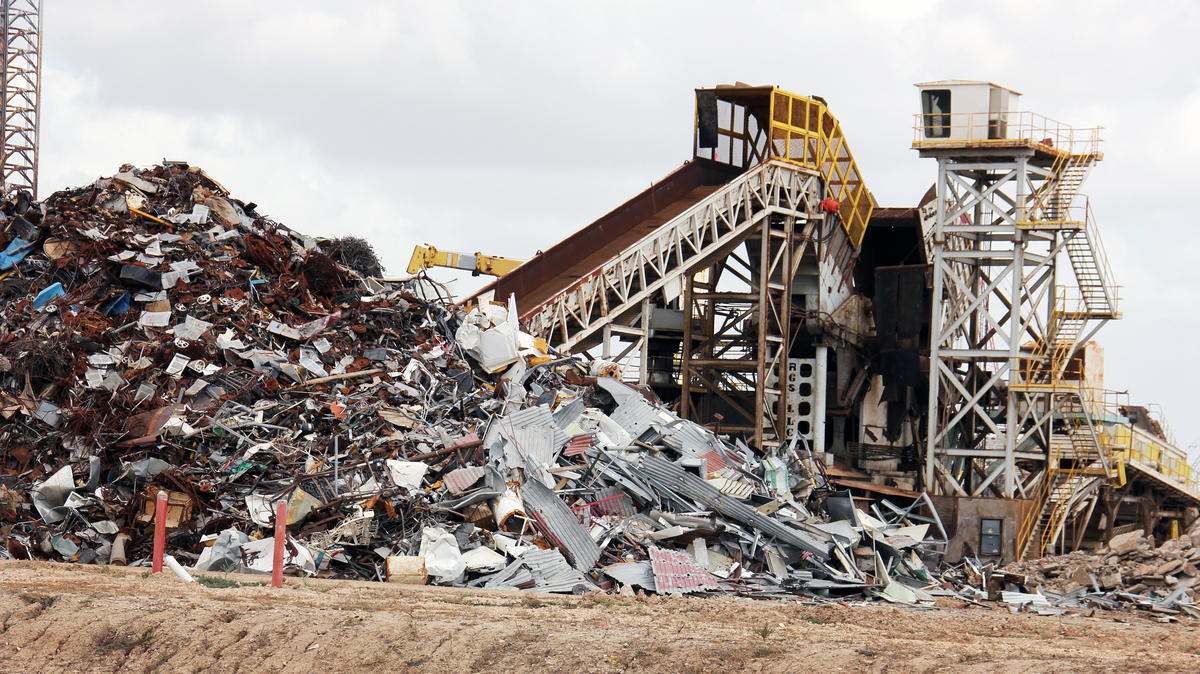 An industrial shredder at International Shipbreaking Ltd. in Brownsville, Texas. The landlocked city has become the hub of the U.S. ship-recycling industry.

This fall, the U.S. Navy will contract three Cold War-era aircraft carriers — the USS Forrestal, the USS Saratoga and the USS Constellation — for scrapping. Often called "supercarriers" owing to their massive size, the ships contain nearly 60,000 tons of steel and other metal each.

All three carriers are likely to be sent to the landlocked city of Brownsville, Texas, to be ripped apart.

The deepwater Port of Brownsville lies inland at the end of a 17-mile channel connecting to the Gulf of Mexico. The long channel provides unparalleled protection from hurricanes and tropical storms.

In the past two decades, the city has become the center of the U.S. ship-recycling industry. Five of the nation's eight recycling companies are here. It's like Home Depot locating right next to Lowe's and Ace Hardware.

Tearing up big ships can be a lucrative business. It's also a messy one. Walk inside a ship that's being scrapped, and you'll find one of the nastiest places imaginable: filthy and rusty, with everything that's poisonous and salvageable torn out.

If it has rained, everything's all wet, too. Brush up against a bulkhead and you can kiss a white shirt goodbye.

But if you're a ship cutter, this is your office, and your cutting torch, your music to work by. Sixty cutters are employed here at Bay Bridge Texas, but even more will be hired soon. 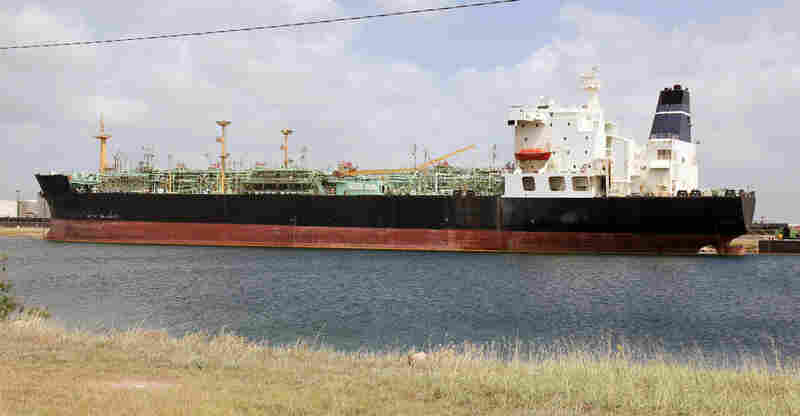 A tanker ship waits to be recycled. Even ships that appear to be in good working condition are valuable as scrap metal. Michelle Lopez for NPR hide caption 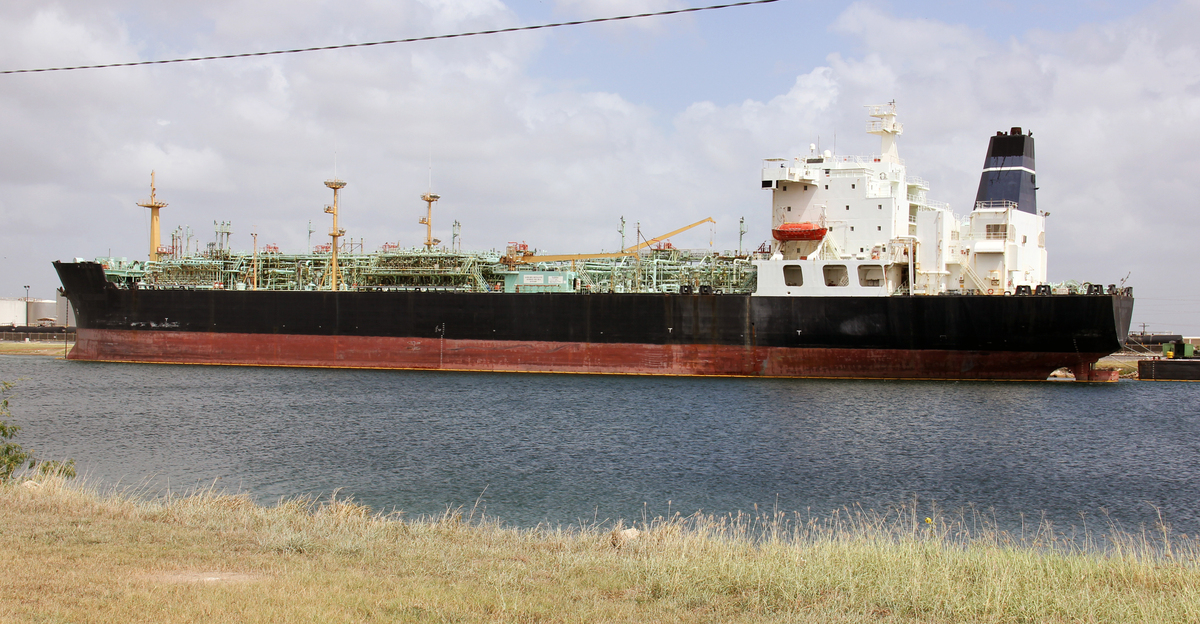 A tanker ship waits to be recycled. Even ships that appear to be in good working condition are valuable as scrap metal.

Chambers says the infrastructure, the deep water channel and the weather all make the Texas city particularly attractive for his company. But building the yard, he says, still required plenty of work.

Now, the yard's piers are built to handle ships as large as aircraft carriers. The pilings, made of steel cores, sink 60 feet deep.

From a distance, the tanker ship at the dock looks as though giant Post-It notes have been slapped onto the hull. But those squares are actually holes; the ship's been turned into Swiss cheese for ventilation and light.

Sergio Cazeres, who's been cutting ships since 1992, says the first cuts are made in the side of the ship. "In the hulls, we make cuts so the air can flow in," he says. "If it's too hot then we provide fans."

Recycled ships are typically scrapped from the top down and from front to back. As the steel is harvested, the bow lightens, and powerful winches begin to pull the ship out of the water and up a ramp.

Chambers says he moved from Virginia to Texas not just for the warm weather and infrastructural perks, but also for the labor pool. He pays between $10 and $13 an hour for the recycling work.

"The Hispanic workforce that I found here is excellent," Chambers says. "It's attitude more than anything. Every day here is different. This is not an assembly line job, and everyday you have to use your wits." 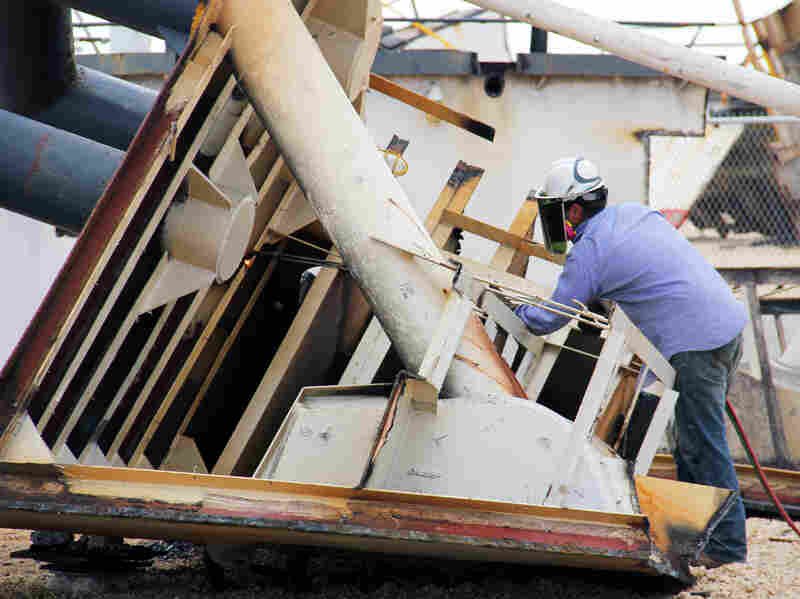 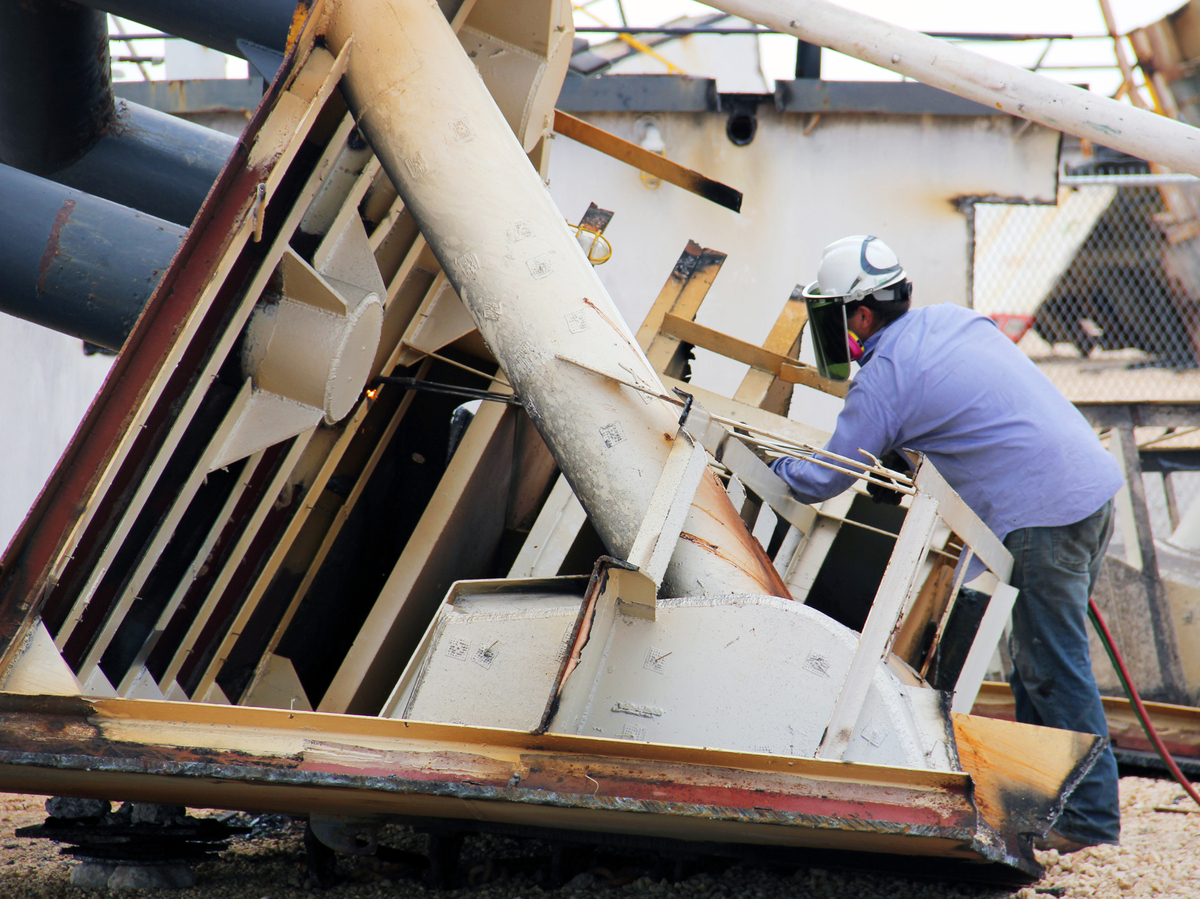 In a nation hungry for working-class jobs, ship recycling is helping to drive Brownsville's economy — even at these relatively low wages. Nearly 1,000 welders scrap 80 percent of the ships recycled in the U.S.

After a ship is dismantled, the metal is shipped to Mexico. Chambers used to send much of his steel to the city of Monterrey in railroad cars — 20 boxcars per train, loaded with 60 tons of steel in each.

But that steel had a market value of 10 to 15 cents per pound. And eventually, the boxcars began showing up in Mexico empty.

Chambers has no idea how the bandits were doing it. "It's unbelievable," he says.

It was no small feat to rip out the steel, Chambers says. "We've even tried welding the steel in there. Then we tried welding bars across the top of it, but it still disappeared."

So now, the steel goes by barge, and the shipments arrive intact. A few months later, they come back into the U.S. as automobile frames, engines and parts to be assembled here.

It's the large availability of ships to be recycled that drives the industry. And as the nation's reserve fleet of aging warships and tankers has become too old to use, those ships are increasingly being sold for scrap.

The price for steel has decreased in recent months with the slowing of the world economy. But that doesn't mean you can't make money breaking ships. Kris Wood, vice president of ESCO Marine, says ships still yield plenty of other valuable elements.

"There's a percentage makeup of nonferrous metals: That's your coppers, your brass, monels that are higher value," Wood says. "So, if the scrap market is down but the ship is still very rich in nonferrous metals, the project can still be a lucrative one."

Back on board at Chambers' yard, the ship cutters remove everything of value — the furniture, the plumbing, the fixtures, the lighting — and sell it. A shopper can get some good deals — if they're open to a nautical theme.

A previous Web version of this story incorrectly said that the USS Independence is one of the carriers to be scrapped. We also said that the carriers will be sent to the Brownsville company Bay Bridge Texas. While the ships are all likely to be sent to Brownsville, nothing has been confirmed. A previous photo caption incorrectly located machinery at the Bay Bridge Texas yard; it was actually International Shipbreaking Ltd. And the audio version incorrectly refers to welders instead of cutters.