Accessibility links
Charles Lloyd's Sangam On JazzSet Charles Lloyd is celebrating his 75th birthday with a new album, Hagar's Song, and concert in the Temple of Dendur at the Metropolitan Museum of Art in New York City. 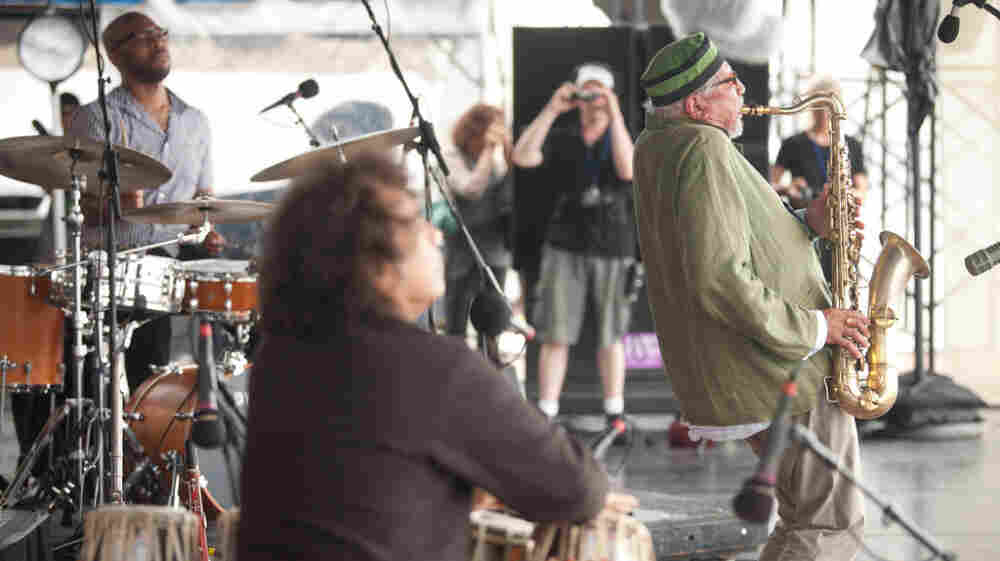 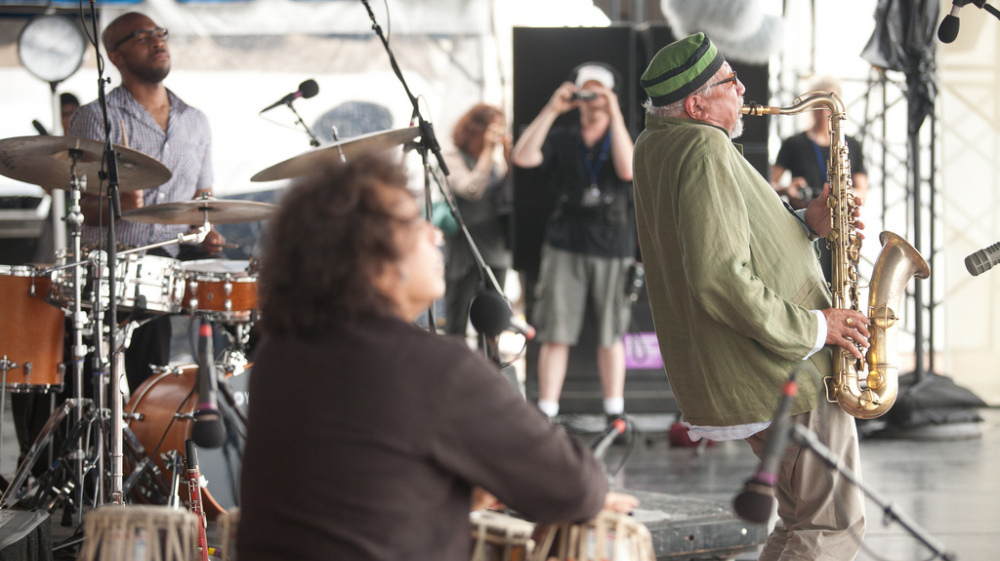 For his uncompromising and serious music, the 2011 Newport Jazz Festival was eager to present Charles Lloyd. He could bring any group he wanted, they told him. Lloyd said yes, and that he would bring Sangam, an East-West trio with one CD and few performances on the schedule. It was a coup!

As Ben Ratliff wrote in The New York Times, "Sangam, the trio of the saxophonist Charles Lloyd, the percussionist Zakir Hussain and the drummer Eric Harland, played and sang — for Mr. Hussain, there's sometimes no difference — through a meditative set of Indian music and free improvisation ... [It] was one of the best stretches of the day." Ratliff concluded that the trio's performance created "a sense that this moment might be bigger than music."

Sangam means confluence in Sanskrit. The group came together in 2006 to honor drummer Billy Higgins (1936-2001), a dear friend of Lloyd and great influence on Lloyd's music. Tabla drummer Hussain sits cross-legged on a beautiful carpet opposite Harland, who moves between drums and piano. In the center, Lloyd plays saxophone, Hungarian tarogato, flute, maracas and piano. Their fluid, meditative music moves through moods and textures with a controlled intensity.

Forest Flower sold over a million copies, but it ended an era for Lloyd. He withdrew to Big Sur to find solitude and a new way of living, and did not return to performing for more than a decade.

Hussain was born in Mumbai and made his first trip to the U.S. in 1970, before turning 20. Over the decades, Hussain has worked with George Harrison, Shakti with John McLaughlin, and these days with banjoist Bela Fleck. Harland, from Houston, is a generation younger than Hussain, but is already a longtime member of Lloyd's quartet and the SF Jazz Collective. At Newport, Harland played with three groups: Sangam, James Farm and the Avishai Cohen Trio.

Our recording is by Steve Remote and the Aura Sonic Ltd. team; Surround Sound mix by JazzSet's Duke Markos.