Accessibility links
A Different Road To Work, Bypassing College Dreams With college costs rising and student debt mounting, some high school graduates in Charlotte, N.C., are opting for an alternative route: European-style apprenticeships. One straight-A student has shifted her sights from an international relations degree to becoming an engineer. 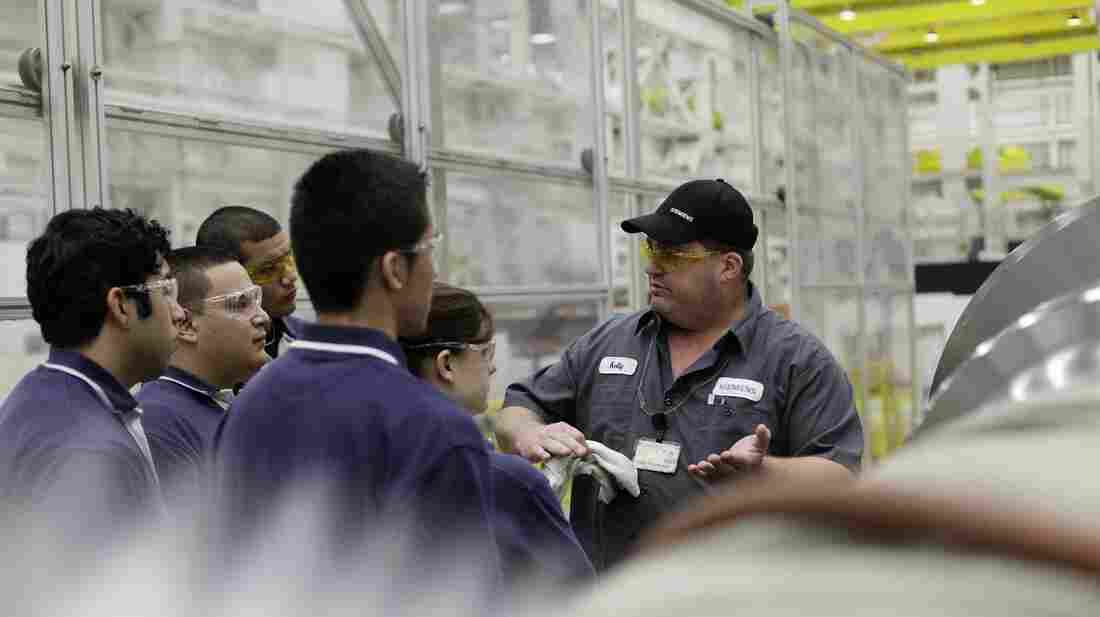 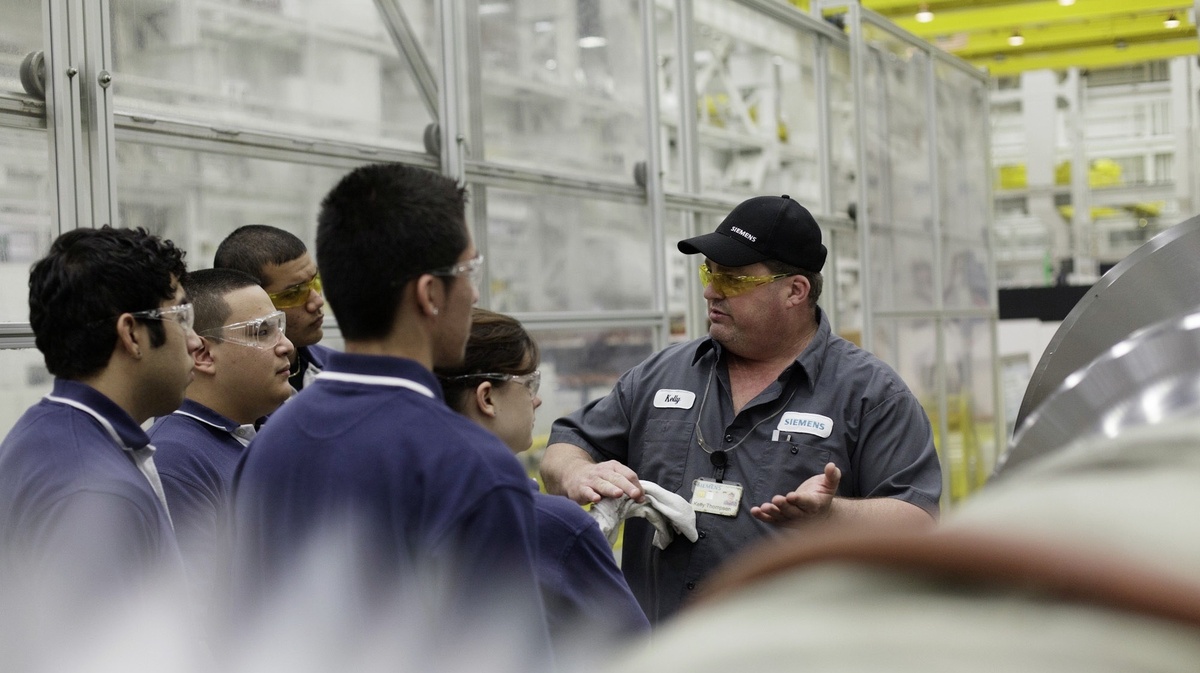 Kelly Thompson, a mentor at Siemens, gives apprentices an orientation of the factory. The program provides on-the-job training in manufacturing.

Rebeca Espinal admits with a shy smile that she's a straight-A math student. She's a high school graduate who dreamed of going to college.

Instead, Espinal, 17, is working in a Charlotte, N.C., factory that makes gas turbines and generators. She is an apprentice with the German company Siemens.

"I was planning on getting a degree in international relations, but with financial aid and how difficult it is to pay for college and everything," she says. "So when Siemens came along and gave me the offer, it was too good of an opportunity to just let it go.

With college costs rising and student debt mounting, a group of college-prep kids in Charlotte are opting for an alternative route: European-style apprenticeships.

Siemens hired her and five other apprentices last year. These days, Espinal works on the factory floor.

Espinal learns all this with the help of her personal mentor, Danny Hawkins. He likes to call her Dora the Explorer. You can see the resemblance.

"It's a great way for these young people to learn that there is a demand for skilled workers," Hawkins says. "Siemens has a very large workforce that's fixing to retire, and there's nobody to replace them."

When Espinal finishes her four-year training program, she'll graduate with an associate's degree, a journeyman's certificate in machining and a guaranteed job that includes a starting salary of around $44,000 a year.

But these apprenticeships in Charlotte go back to 1995 when the Austrian manufacturer Blum couldn't find skilled workers. 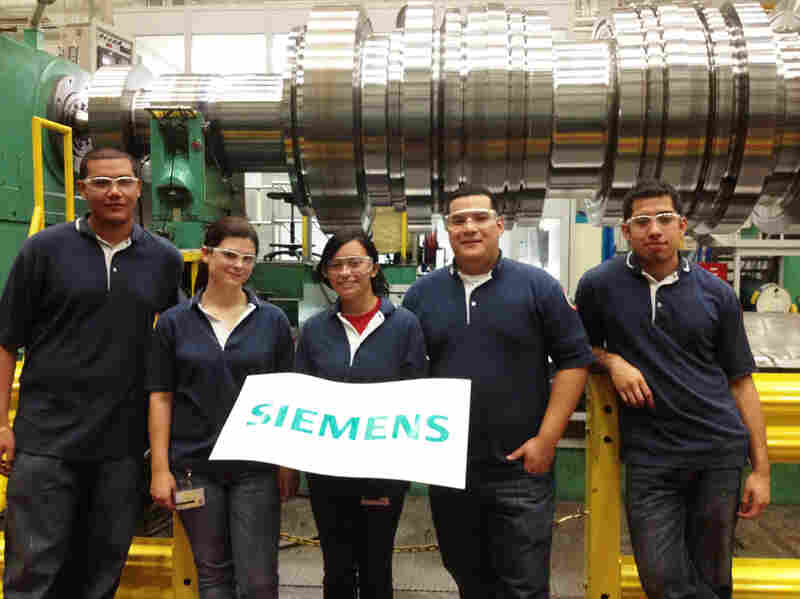 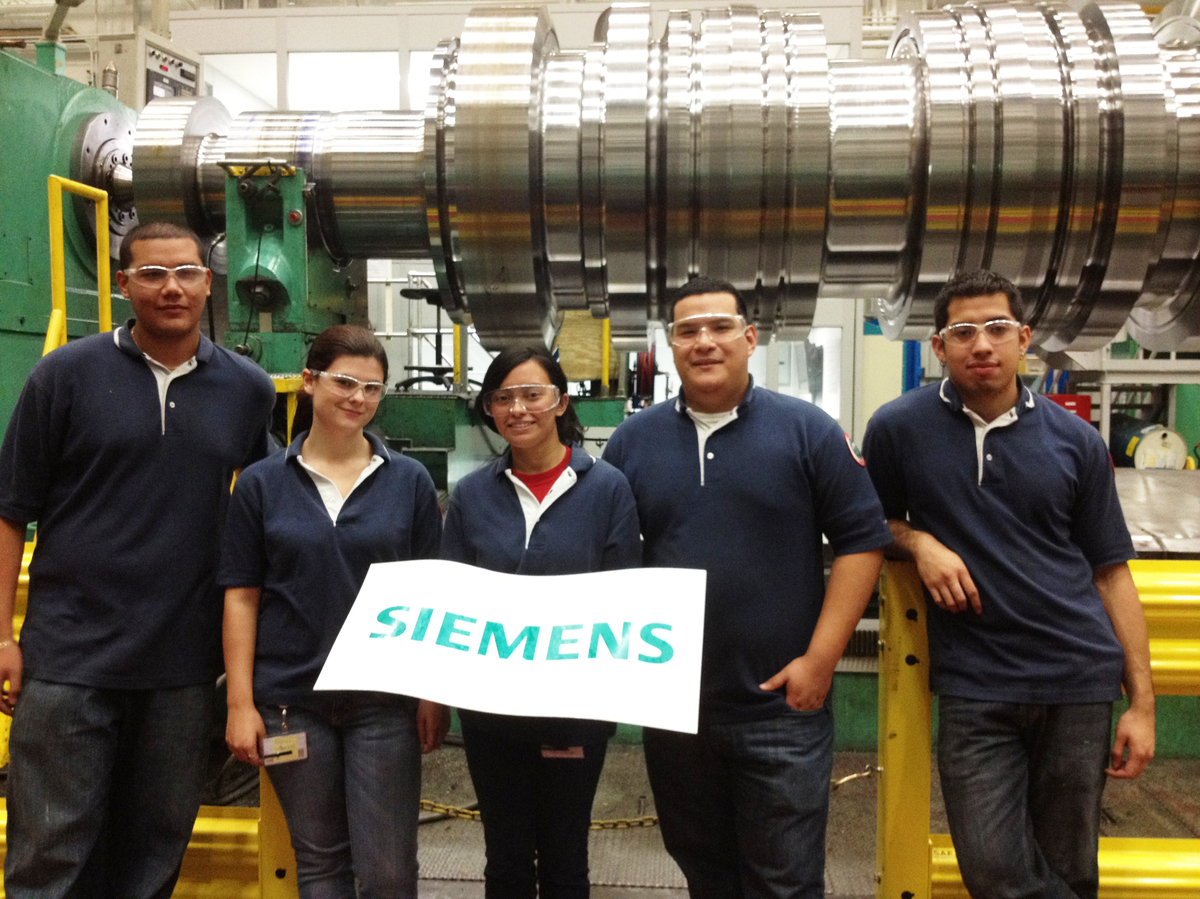 So Blum created Apprenticeship 2000, a co-op with seven other local firms. It was revolutionary for its time. But Andreas Thurner, who runs the program, says it suffered from an American stigma against blue-collar work.

"You have the one-way path in America — this is college education. So it was, you can imagine, a lot of resistance from counselors, from teachers, from principals," Thurner says.

Over time, the stigma faded as the program grew. This year, Apprenticeship 2000 received a record number of applications.

The companies foot the bill for training that costs about $160,000 per student over the course of four years.

"I think it's a small price to pay because I know the time when we couldn't do what we do now," Thurner says. "We couldn't grow the business. We could not get machines in that they wanted because we didn't have the people to run it."

Thurner says there's no alternative to this on-the-job training. Modern manufacturing is high-tech, so you're dealing with expensive equipment. Push the wrong button and you've got a $50,000 mistake.

On days when the apprentices aren't on the job, they're at Central Piedmont Community College in downtown Charlotte. The companies partnered with the school to develop a curriculum that mixes mechanics and electronics.

Today, the apprentices are learning about chain drives.

"I don't regret it because you have opportunities in this company to grow," she says. "And so one of my goals ultimately in this company is to become an engineer, and possibly, you know, travel around the world, go to other Siemens factories, and maybe, you know, work with other engineers from other countries."

There are more than 20 other apprentices in Espinal's class. And they're smart — some tell stories of taking advanced placement courses or receiving the top grades in physics.

But apprenticeships are still fighting an image battle. Only 0.3 percent of the American workforce are apprentices, according to a report from American University economist Robert Lerman.

"It's a very minor phenomenon," he says.

"I do not understand why there isn't a much bigger push toward shifting funding toward apprenticeship programs," he says.

Lerman is hopeful, though. He says these days there's more willingness to discuss apprenticeships as a viable career alternative. It seems the crummy economy is encouraging parents and kids to rethink the value of an expensive college degree.