Accessibility links
For Temp Workers, 'Temp' Looking More Permanent The temp industry has done well in the economic recovery. But while temporary work used to be considered a steppingstone to a full-time job, some experts argue that employers may be less inclined than in the past to shift away from temp staffers when the economy rebounds. 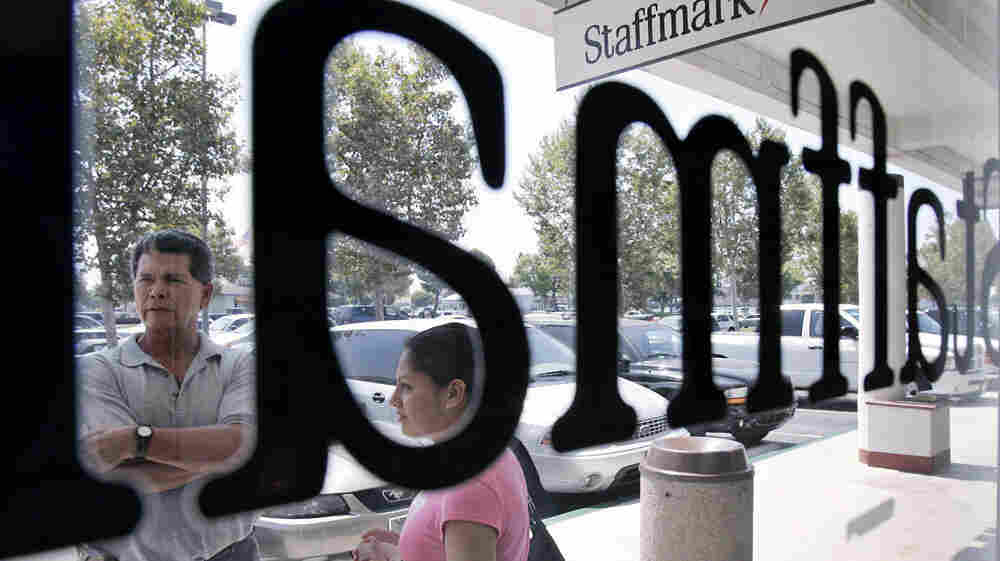 Job applicants outside the Staffmark temp agency in Cypress, Calif., in 2005. Temp hiring is usually a harbinger of an improving job market, but some analysts say more employers may be considering temps as a more permanent staffing solution. Ric Francis/AP hide caption 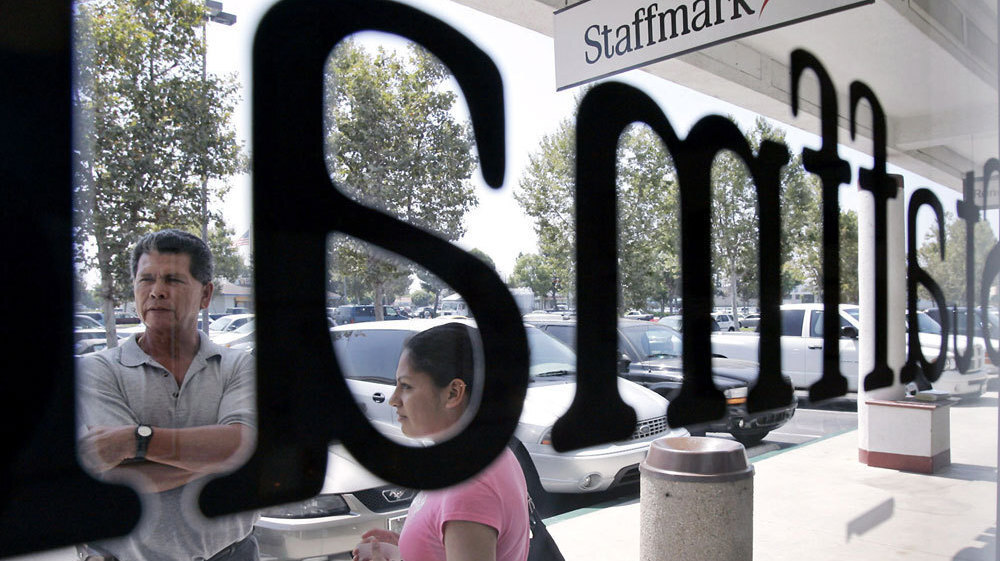 Job applicants outside the Staffmark temp agency in Cypress, Calif., in 2005. Temp hiring is usually a harbinger of an improving job market, but some analysts say more employers may be considering temps as a more permanent staffing solution.

While the job market remains sluggish, temporary work is one area that's done very well in the economic recovery. Companies are keeping their temps longer and are even using them to fill professional and high-ranking positions.

The average daily number of temporary workers employed during the first quarter of 2012 was more than 2.5 million. That's up from a low of 2.1 million in early 2009, according to the American Staffing Association.

Temporary work was once considered a leading indicator for the job market — a harbinger of improved prospects for people seeking permanent positions. But in this recovery, staffing agencies say fewer employers are taking temps onboard as permanent workers.

"It is clear that companies are using temp and contract workers — and unfortunately not making those permanent hires — at this point," says Joanie Ruge, senior vice president and chief employment officer for the temp agency Randstad Holding.

Temp Employment On The Rebound

May and June 2012 figures are preliminary.

"Because there's still some uncertainty and [companies are] wondering if the economic conditions are sustainable, this offers them some good flexibility," Ruge says.

Historically, temp positions have also been associated with clerical and manufacturing jobs. But that's also shifting in the current economy. One of the biggest growth areas in temping, Ruge says, is high-skilled work: engineering, information technology, pharmaceuticals, accounting and finance.

And employers are even hiring temps for jobs in the higher ranks. Ruge says professional positions make up about half of Randstad's business.

Ed Schultz has been acting comptroller or chief financial officer for various companies on a temporary basis for more than a decade — by choice.

Schultz says companies thinned out their chief officer ranks — or their "C-suites" — during the recession. Now that the economy is recovering, there's more demand for mergers and acquisition work, he says, but not quite enough to justify a full-time hire.

And, Schultz says, it may be that many businesses will never fully hire back their executive bench.

"My feeling is that it's a permanent change," Schultz says. "It's a sea change that we're seeing more activity in that interim C-suite area."

Normally, the pattern with temp work is that it is cyclical: It goes up when the economy is good, and down when it's bad.

But during leaner times, companies experiment with their workforce and sometimes make permanent changes, according to Nik Theodore, director of the Center for Urban Economic Development and a professor at the University of Illinois, Chicago.

"There's something more happening here," Theodore says. "I think temping is becoming a more important feature of employers' workforce strategies, and a bigger part of the careers of workers."

Companies use temps because they can pay fewer benefits, take on fewer legal responsibilities and fire them easily, Theodore says.

But those perks for the employer usually come at a cost to the worker.

"Those temp jobs are often disconnected from the career pathways and job ladders that exist within a company," making it harder for workers to move up, Theodore says.

Still, for people like TaShea Mosley, 23, working as a temp is one of the few ways to get her foot in the door in a down economy. She wasn't able to find a full-time job, so she started temping as an administrative assistant through Manpower earlier this year.

"The only thing that differentiates me from anyone is that my badge is different," Mosley says. "They treat me as though I am a full-time employee, actually. I just don't have all the benefits of being one."

Mosley says she loves her current posting and hopes to be hired on permanently. The company has a hiring freeze, but she's hoping her job performance will earn her the security of a permanent position.

"When you're a temp, it's more like you're disposable," the Atlanta resident says. "One day you can have a job, and the next day you can't. So it's always kinda like a little bit of a Russian roulette; you never know if it's going to be your time to go or not."