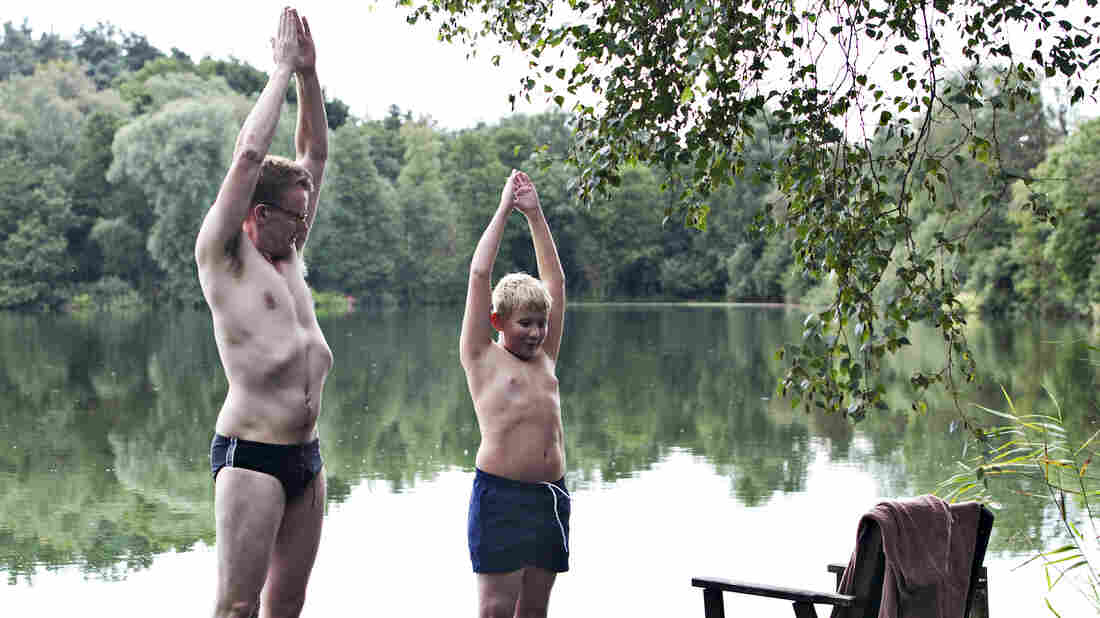 To prove his abilities as a father, Frank (Frank Hvam) takes his nephew Bo (Marcuz Jess Petersen) on what was planned as a no-wives-allowed canoe trip. Klown has already been picked up for an American remake, slated for 2013. Drafthouse Films hide caption

Rated R for strong sexual content, graphic nudity, language and some drug use

In Danish with subtitles

Note: Subtitles contain language that may offend some audiences.

The success of R-rated comedies in recent years might as well be broken down to a formula: blend boundary-pushing raunch comedy with heartfelt sentimentality — and if you're most movies produced by Judd Apatow, center the story on male coming-of-age, even for characters well into adulthood. Teary eyes, full raunch, can't lose.

Klown, an audacious R-rated Danish comedy, fits so easily into the category in tone and theme it barely feels like an import. In fact, it seems to know the genre playbook better than most American entries. Fans of Role Models and Knocked Up will instantly recognize this film's setup, as two men in their 40s each confront the challenges and responsibilities of adulthood with less than mature ways of coping. Yes, they involve alcohol, drugs and sex.

But despite a 2010 release in Denmark and a story that covers familiar territory, Klown feels instantly fresh, taking bold chances with its characters and gags that pay off in uproariously funny and sometimes heartrending moments.

Based on a Danish sitcom of the same name that borrows its premise heavily from Curb Your Enthusiasm, Klown stars Danish comedians Frank Hvam and Casper Christensen as skewed versions of themselves: Frank, a timid and awkward square, and Casper, a smooth-talking but petulant rake a little more desperate for sex than usual.

Casper, Frank and their intellectual friends (including a crass cameo by filmmaker Jorgen Leth) are just days away from an eagerly anticipated, no-wives-allowed tour of debauchery that begins with a canoe trip and ends with a music festival, which is located conveniently close to a famed international brothel.

Casper is bursting at the seams, while Frank is dealing with a more serious problem: He's learned that his girlfriend Mia (Mia Lyhne) is pregnant and that she doubts Frank's potential as a father. He protests that he should be allowed to at least give it a try — facepalm, Frank — but fails the simple test of baby-sitting his 12-year-old nephew Bo (Marcuz Jess Petersen) for a day. When he leaves the poor kid in the house as it's being robbed, Frank is declared unfit to be a dad. 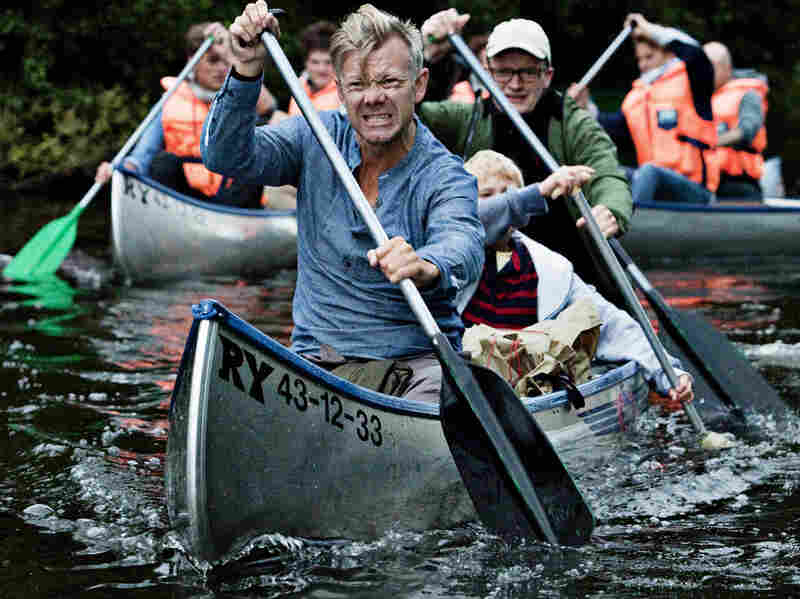 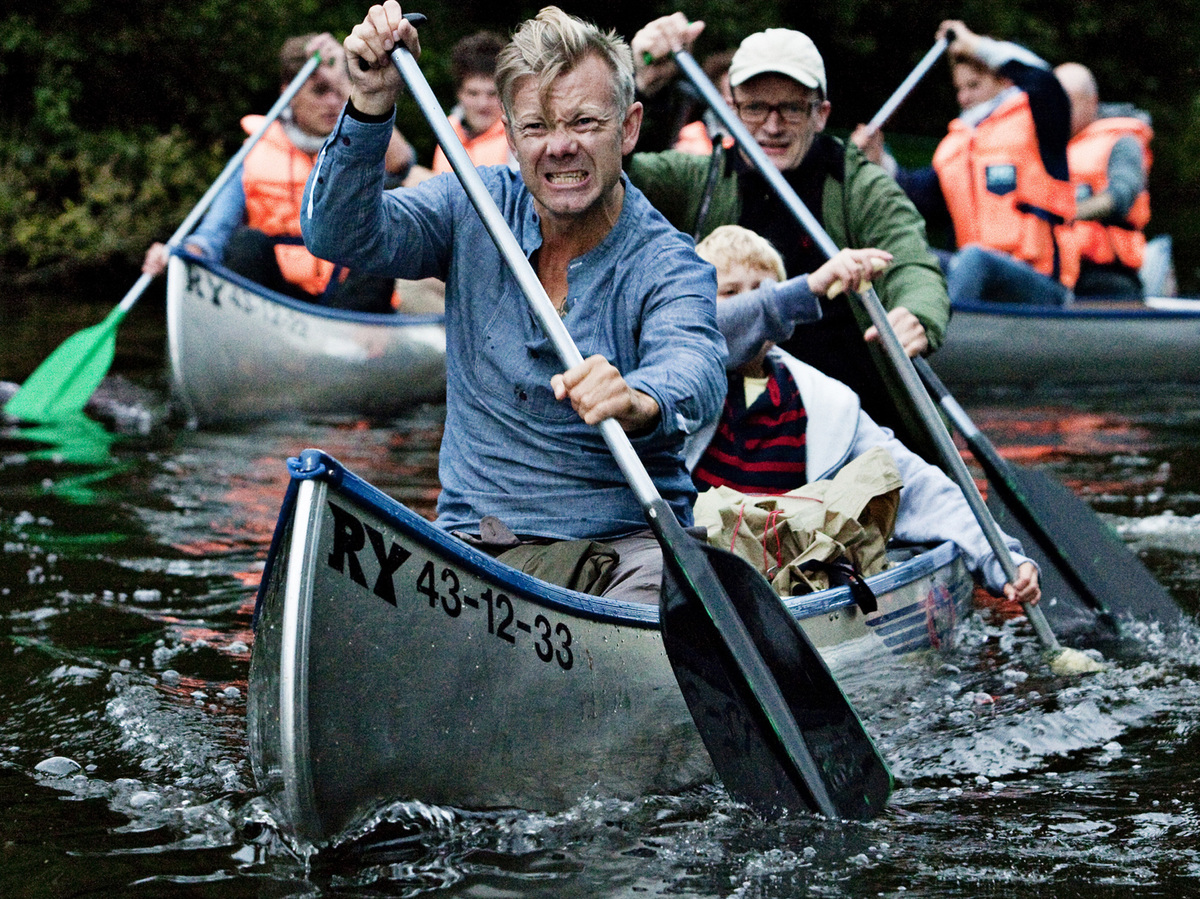 Well intentioned but socially lost, Frank makes every problem he attempts to solve sublimely, cringe-inducingly worse. So desperate to prove himself worthy of fatherhood — even if he's not entirely sure he wants to be a father — Frank decides the best course of action is to kidnap Bo and bring him along on the trip. Casper protests that the kid will get in the way, but Casper's wife clearly sees no problem with it, and they're off.

The movie finds its warmest and its best comedic moments exploring the dynamic between this unlikely trio: the shy, uncertain kid; the sex-obsessed cad who couldn't care at all about him; and the uncle who's trying to care but has no idea how to connect with him.

As Frank gets to know Bo better, they begin to form a bond, but more often than not Frank trusts his worst instincts and fails Bo dramatically, putting his nephew's needs and safety after his own. His flawed attempt to defend Bo against some bullies at a campground gets the group kicked out, thankfully just as Casper is putting the moves on a group of high school coeds.

When the potential consequences of what Frank has done begin to dawn on him, Casper puts it bluntly: either Bo has the best trip of his life or Mia leaves him.

As the stakes rise, so does the movie's giddy enjoyment of Casper's depravity and Frank's faulty fathering skills. But the film also risks finding too many of its laughs at Bo's expense: He's put at the mercy of two men not used to looking out for another human being, one who will drop him at first sight of anything female (and possibly male) and another who will throw him under the bus if it means he'll be viewed as cool.

It's here that the movie is at its most fearless. Not in its brazen, headfirst leaps into dark and uncomfortable humor but in the implication of true danger: If Frank is truly an unfit father, his test run at being one could end with Bo as scarred collateral.

Men behaving like children is to be expected in a film that shares DNA with the likes of The Hangover, but Klown revels in the fun its guys are having without letting them off the hook. And unlike some of its R-rated Apatow cousins, Klown runs a tight 90 minutes, pleasantly moving from gag to hijinks without a breath in between.

It's no wonder, then, that Hollywood has already taken an interest, with a remake starring Danny McBride and directed by Todd Philips slated for 2013. As natural as the fit may be, Klown is already one of the funniest and most emotionally engaging entries to the R-rated comedy genre in recent years. It deserves to be seen. (Recommended)