Accessibility links
Andy Cohen - At Bravo, A King Of Pop Culture Works Day And Night Andy Cohen made the cable channel an unlikely focus of water-cooler talk by developing the Real Housewives series. After work, he hosts a nightly talk show — and he's not looking to stop doing either anytime soon. 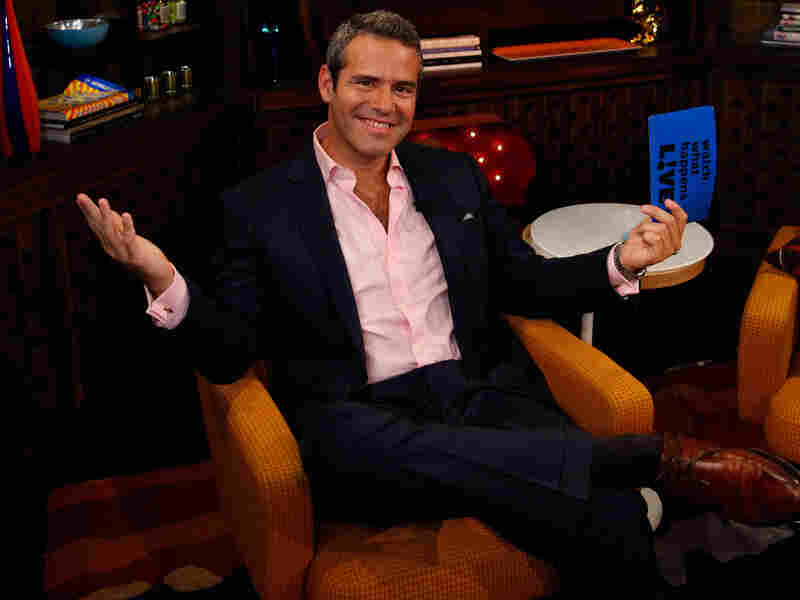 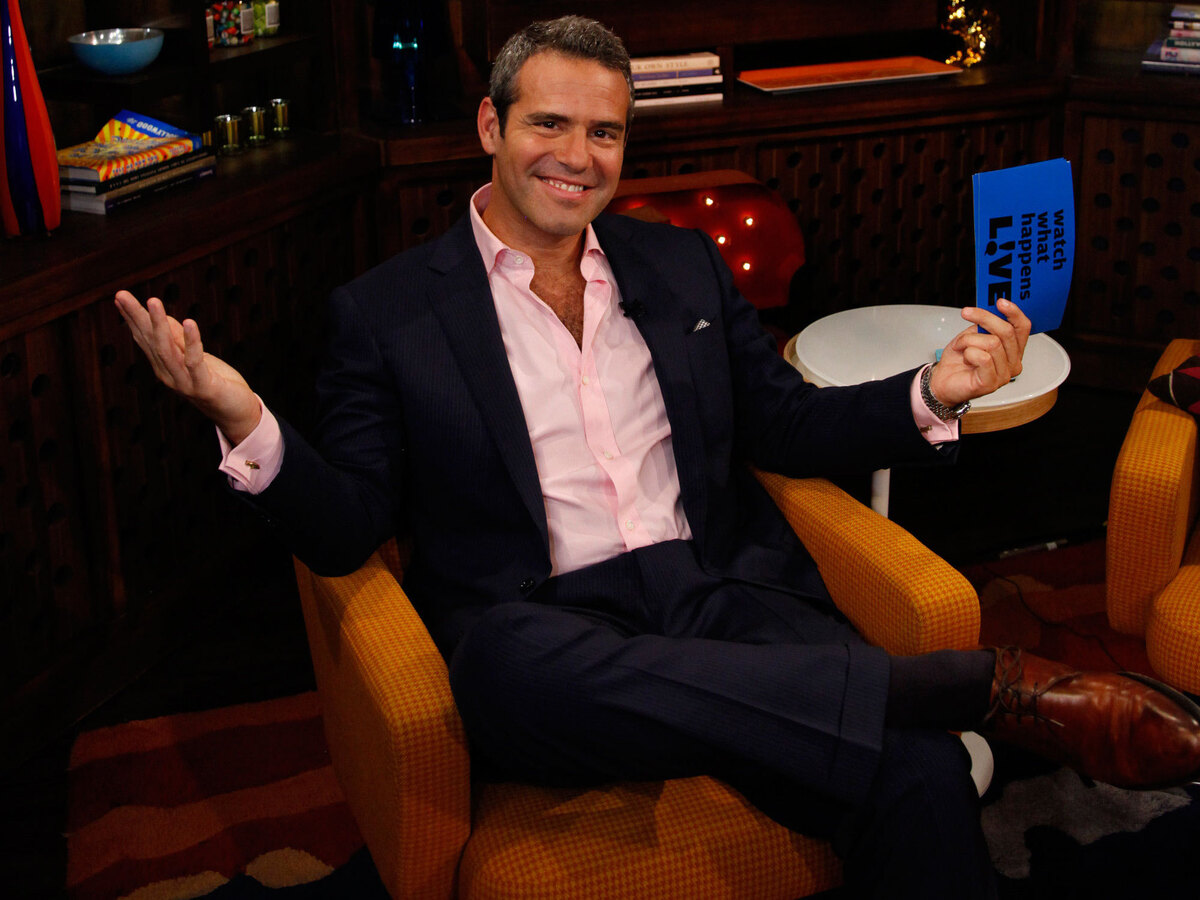 Andy Cohen on the set of his nightly Bravo talk show, Watch What Happens: Live. Cohen is also Bravo's executive vice president of development and talent, and has helped make Bravo a pop-culture heavyweight.

Andy Cohen has been yakking for most of his 44 years. He has a book titled Most Talkative — a title he earned in high school.

"My mouth has been my greatest asset and also my biggest Achilles' heel," he says.

Most days, it's an asset.

You may not know who Cohen is, but if you've ever seen Top Chef or any of the Real Housewives series, you've seen his work. Cohen's chattiness and his knack for producing reality shows that get people talking has made Bravo one of TV's hottest cable networks — the cable channel of choice for well-educated, high-earning reality-TV lovers.

The channel airs so many programs centered on food, fashion, beauty and pop culture that Bravo is often referred to as "the gay channel." At a press conference a few months ago, Cohen tried to straighten everyone out about that.

Cohen grew up wanting Matt Lauer's job hosting the Today Show. He started with a TV internship while he was in college, but he says his dream career almost came to naught because a television producer told him he had "wonky eyes" and therefore wasn't made to be on camera.

Cohen's left eye occasionally does wander off-course, just a little, so Cohen took another route. He worked at CBS news for 10 years, rising through the ranks to become one of Dan Rather's producers at 48 Hours.

After a decade, he left for cable, first for a small arts and culture channel called Trio, then for Bravo.

At that time, Bravo was already producing hits like Queer Eye for the Straight Guy, where a gaggle of gay consultants took grungy straight men and made them over. But the network really hit its stride when Cohen came up with The Real Housewives, which focuses on fractious friendships among wealthy women in cities across the country, from New York to Beverly Hills to Atlanta.

'Top Chef': Tiffani And Jen Show How And How Not To Do All-Star Seasons

The series made Atlanta housewife NeNe Leakes — a Cohen favorite — famous enough that Donald Trump asked her to be a contestant on Celebrity Apprentice, where she threw a memorable tantrum that rattled even Trump.

Cohen says his housewives may come from different cities, but one thing remains the same.

"We don't pick wallflowers, to put it mildly," he says.

The assorted housewives — they're also in New Jersey and Miami — have become a not-so-guilty pleasure for millions, who tune in to check out the diamond-dusted soap operas each week.

"I would say it's anthropology of the rich," Cohen theorizes. "I remember one of the first reviews in The New York Times for The Real Housewives of Orange County, which was the first out of the gate. They said someday people will look at this and say: 'Oh, this is how a certain group of nouveau-riche women lived at this time in America.' "

But it hasn't all been fancy lunches and Louboutins. Before the second season began of Real Housewives of Beverly Hills, news emerged of a tragedy on set. One of the cast members, Russell Armstrong, had committed suicide while participating in the show.

It was a crisis point for Cohen. There was a lot of talk on- and off-air about whether reality TV had helped to kill Armstrong and whether the genre — and Cohen — had gotten out of hand.

After conversations with Bravo's producers, the Beverly Hills women and executives at Bravo's parent company, NBC Universal, a second season was cleared to air. Today, the series remains popular.

Those begat a late-night talk show called Watch What Happens: Live. That makes Cohen a colleague of Leno, Letterman and Fallon. It's an ironic if fortunate twist for Cohen: He started out wanting to be an anchor and now he sort of is.

He often has other anchors as his guests. Anderson Cooper has been on the show, as has one of Cohen's old bosses, Dan Rather.

"To have Dan Rather, all these years later, walk in here and be on my little 'Playboy-After-Dark-meets-Wayne's-World' [show] was so cool," Cohen says.

For now, Cohen says he'll continue to juggle being a network executive by day and a television talk-show host by night because he loves them both and he still has the energy for it.

"The one guiding principle over my 23-year career in TV has been as long as I'm having fun, I really don't care what the job title is," Cohen says.