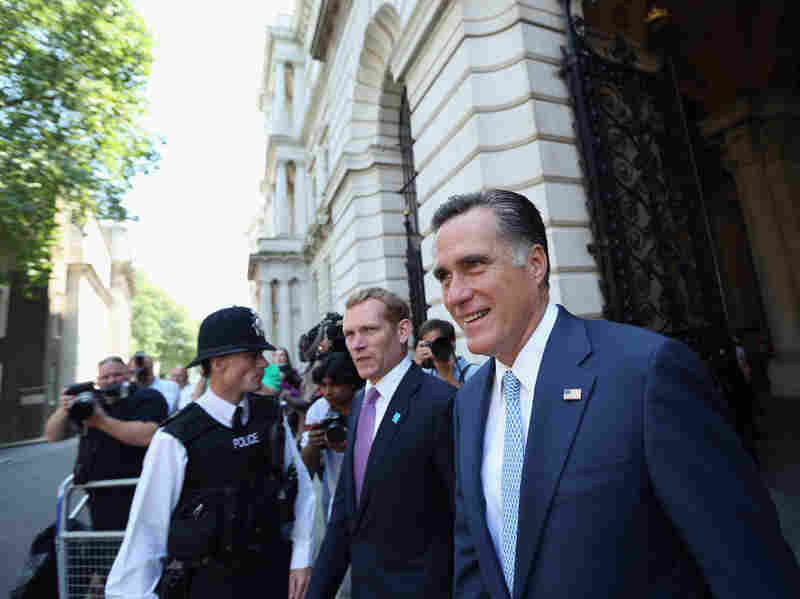 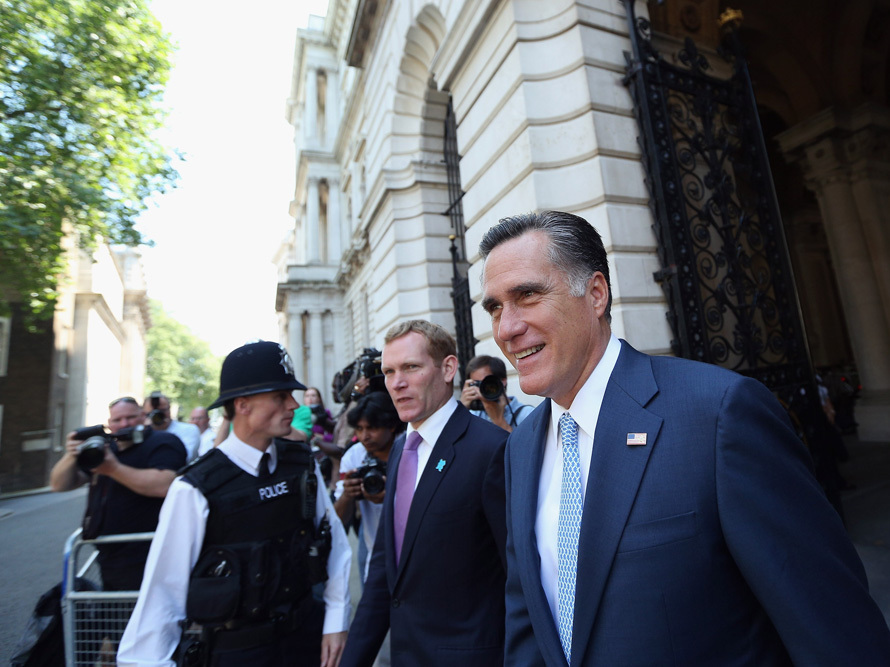 Republican presidential candidate Mitt Romney was in London on Thursday to raise money for his campaign, to meet with former and current British leaders and to remind voters of his experience running the 2002 Winter Olympics.

Romney is scheduled to attend the opening ceremony of the London Games on Friday, after meeting with American athletes. The visit seems designed to bolster a key element of Romney's resume.

In early 2002, Romney went from CEO of the Salt Lake City Olympics to candidate for Massachusetts governor in just three weeks.

Rescuing the Salt Lake City Games from the biggest ethics scandal in Olympic history became one of candidate Romney's biggest boasts as he ran for governor — and later for president.

As he has put it: "I worked at one company, Bain, for 25 years, and I left that to go off and help save the Olympic Games."

So with the London Olympics getting under way, Romney is highlighting his Olympic pedigree. That's a no-brainer, suggests Robert Guest, the business editor at The Economist who covered Romney's 2008 presidential campaign.

"The other two parts of his resume are a bit more controversial," Guest says. "A lot of people don't like what firms like Bain Capital [do]. A lot of people aren't keen on Massachusetts, either, because they're way to the right of Massachusetts or because they think that he's changed his tone since running the place. But the Olympics is completely uncontroversial. So if you can show that you're competent about the Olympics, it's an unambiguously good thing for your campaign." 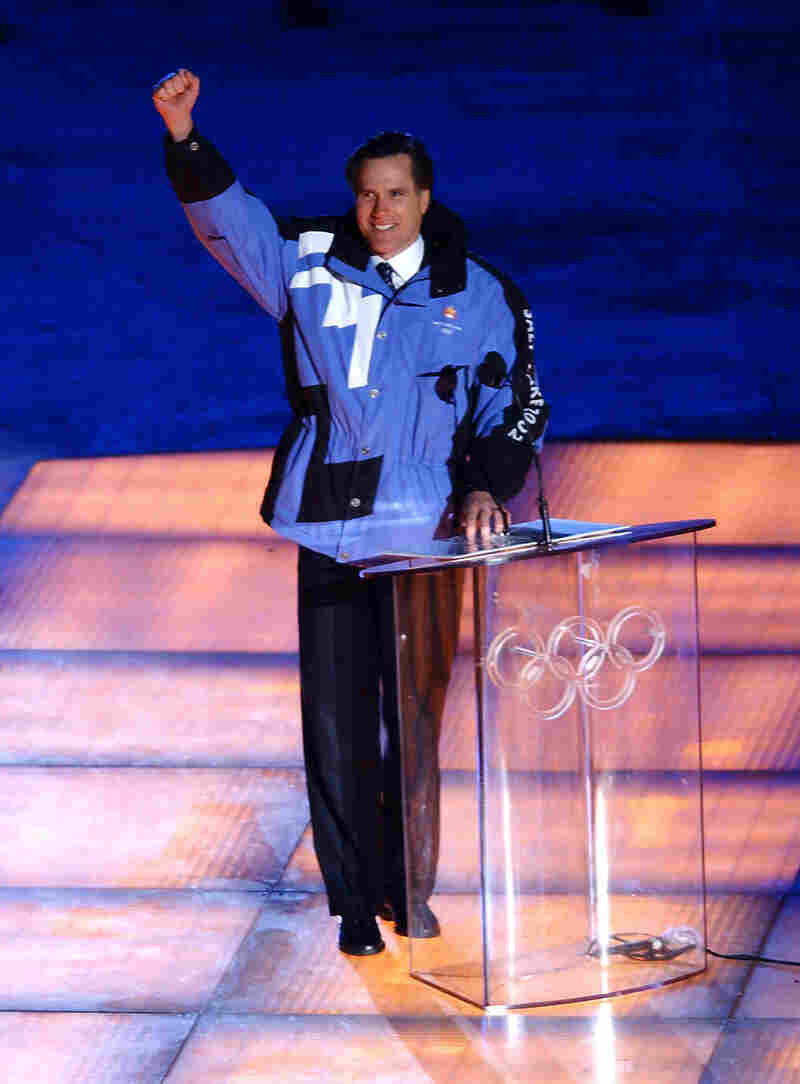 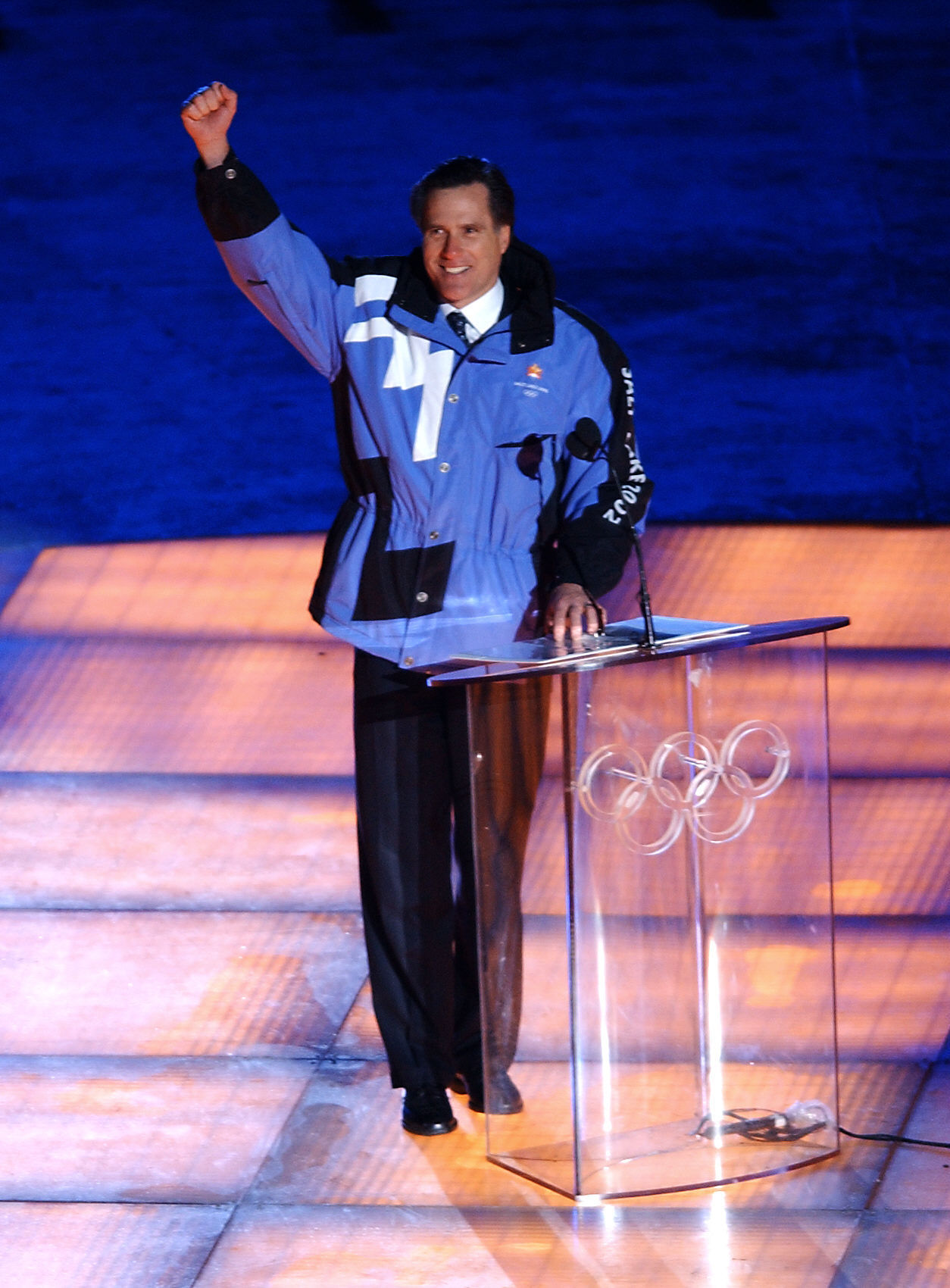 Romney appears during the opening ceremony of the 2002 Winter Olympics in Salt Lake City.

Some are taking Romney's connections to the games, though, and trying to turn them against him. As Romney traveled to London, a superPAC supporting President Obama released an ad that uses the opening ceremony of the 2002 Olympics to accuse Romney of sending jobs overseas and parking his money in foreign banks.

"There's Mitt Romney, who ran the Salt Lake City Games," an announcer says in the ad, "waving to China, home to a billion people. Thousands owe their jobs to Mitt Romney's companies."

The Romney campaign has said that any shipping of jobs overseas did not happen while Romney was actively managing Bain Capital.

His visit to London also revives questions about how much credit he deserves for helping "save" the Olympics, as he put it.

International Olympic officials and some Olympic reporters insist Romney should get credit. But Olympic historian David Wallechinsky says it's an inflated claim.

"This is ridiculous," Wallechinsky says. "You have a movement which had already survived two World Wars, four major boycotts, a terrorist attack, and, you know, he comes along and saves the Olympic movement because of a financial scandal? I don't think so."

Then There's The Horse, Of Course

Wallechinsky also notes that the appearances in London may bring Olympic attention Romney doesn't want. His wife, Ann, is part-owner of a horse entered in the dressage competition — a sport that costs tens of thousands of dollars in expenses, underscoring the Romneys' wealth. In an interview Wednesday night posted on the NBC Nightly News website, Romney put some distance between him and the horse.

"This is Ann's sport," he said. "I'm not even sure what day the sport goes on. She will get the chance to see it. I will not be watching the event. I hope her horse does well. But just the honor of being here and representing our country and seeing the other Olympians is something which I'm sure that people that are associated with this are looking forward to."

Associating with Olympic athletes, who are often respected and revered, is on Romney's agenda Friday. He meets and greets American Olympians in the afternoon. First lady Michelle Obama does the same thing in the morning.

After the opening ceremony on Friday night, Romney continues his overseas trip, meeting with current and former leaders of Israel and Poland.