Accessibility links
Latest Target For Palestinians' Protest? Their Leader A longtime proponent of a peaceful solution to the Arab-Israeli conflict, Palestinian President Mahmoud Abbas is feeling the heat from Palestinians frustrated with the lack of progress in Mideast talks. Opponents also say the 77-year-old leader isn't addressing dire economic problems. 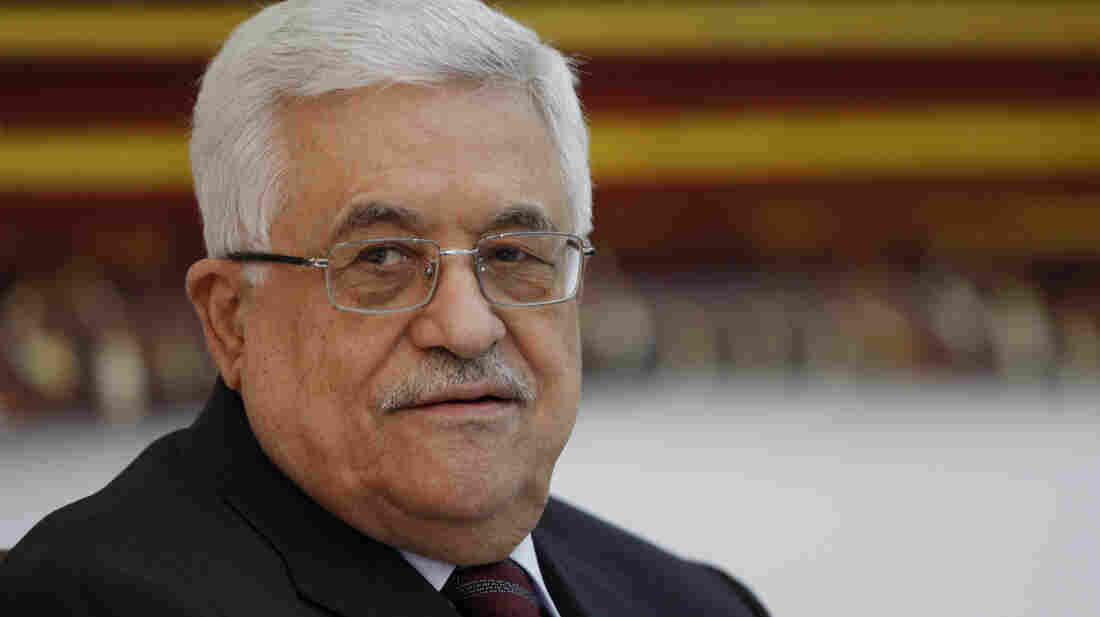 Palestinian President Mahmoud Abbas, who succeeded Yassir Arafat in 2005, is a longtime proponent of a peaceful resolution to the Israeli-Palestinian conflict. But Palestinian discontent toward Abbas is growing. Majdi Mohammed/AP hide caption 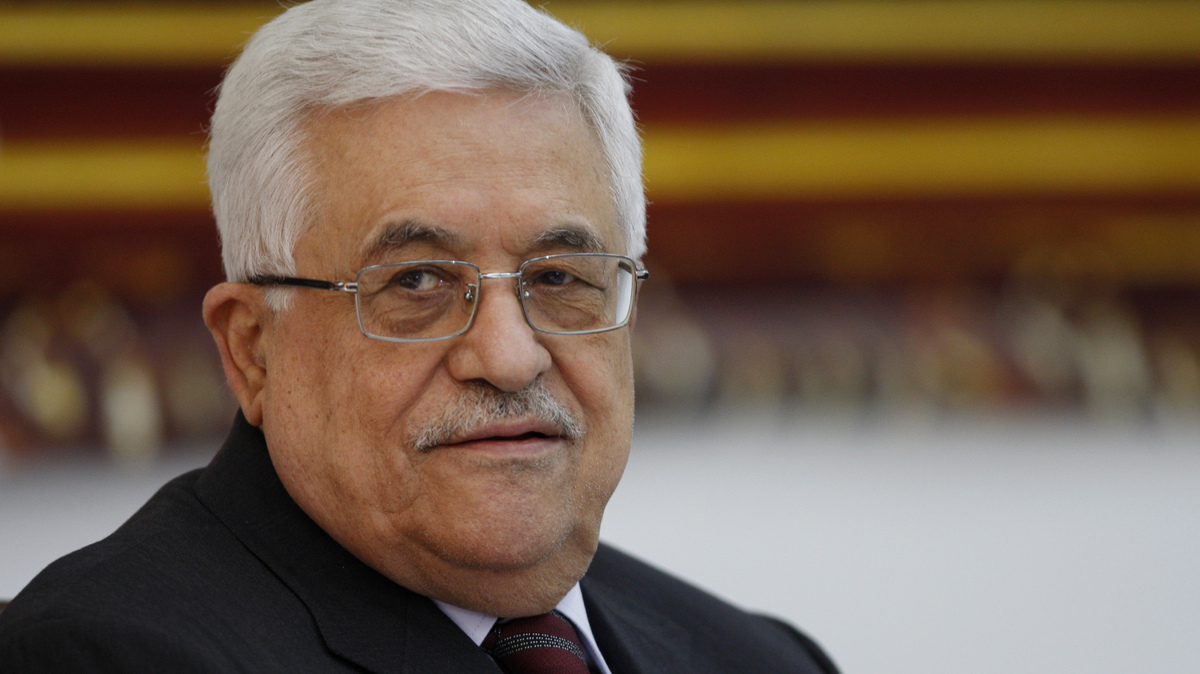 Palestinian President Mahmoud Abbas, who succeeded Yassir Arafat in 2005, is a longtime proponent of a peaceful resolution to the Israeli-Palestinian conflict. But Palestinian discontent toward Abbas is growing.

The Kalandia checkpoint between Jerusalem and Ramallah in the West Bank is best known as a flashpoint between Palestinian protesters and Israeli security forces. Images of masked youths throwing rocks by the painted concrete wall here are ubiquitous.

"I think there will be an intifada, or uprising, not against the Israelis, but against Abbas and all the corrupt people around him," says one protester, who won't give his name for fear of reprisals.

He says he's a staunch supporter of the Fatah movement, which dominates the Palestinian Authority, but he no longer supports Abbas, its leader. And he's not alone, as opposition to the 77-year-old leader grows among disillusioned and frustrated Palestinians.

This protester says he came out to demonstrate because of a recent series of arrests in the West Bank by the Palestinian Authority. The sweep netted 150 people who were, according to officials, rogue militants or guilty of corruption. 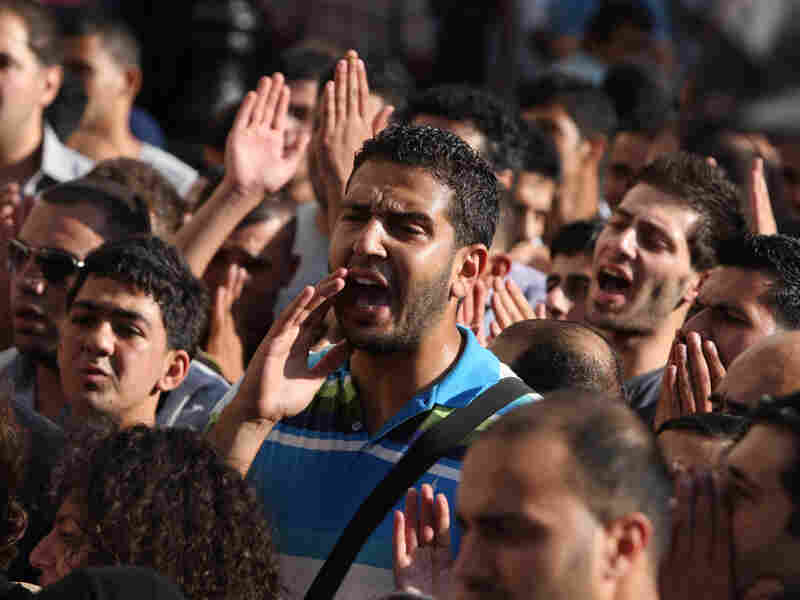 Palestinian demonstrators chant slogans in the West Bank city of Ramallah last month during a protest against a meeting between Abbas and Israel's deputy prime minister. AFP/Getty Images hide caption 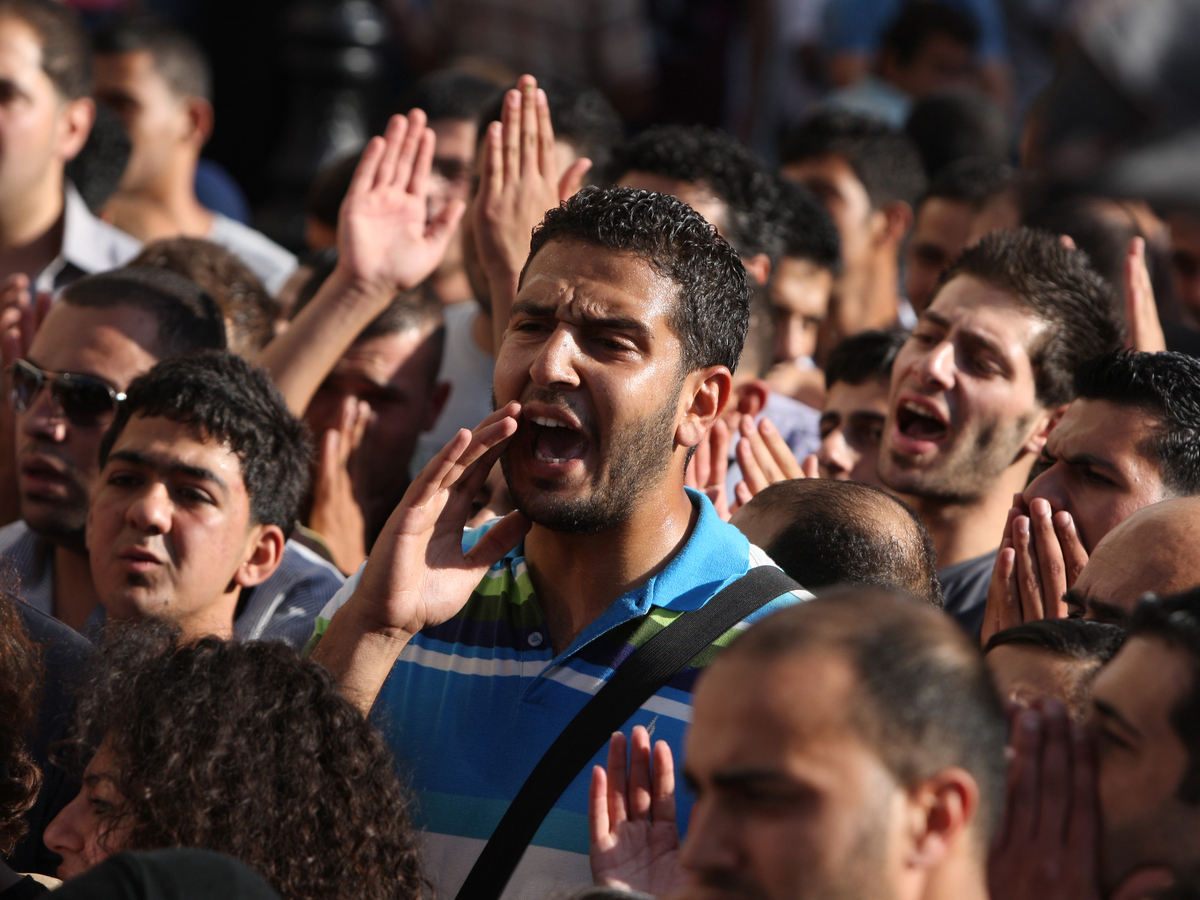 Palestinian demonstrators chant slogans in the West Bank city of Ramallah last month during a protest against a meeting between Abbas and Israel's deputy prime minister.

The protester disputes the account, saying most of the people arrested in his neighborhood were party loyalists who are simply no longer happy with Abbas.

That mentality, protesters say, was on full display at another demonstration a few weeks ago.

Freelance journalist Mohammed Jaradat says people had gathered to demonstrate against a possible Abbas meeting with the then-Israeli deputy prime minister. Despite showing his press card, Jaradat says, he was beaten at the event and then again at the police station.

"For one hour, maybe 45 minutes or 50 minutes, they were beating me," the reporter says.

Jaradat says the leadership has blamed the Israeli occupation for all the ills in Palestinian society. But increasingly, the young people, after the Arab Spring, are calling the Palestinian Authority to account.

Abbas has been Palestinian president since Yassir Arafat's death in 2005. A longtime supporter of nonviolence and a two-state solution, Abbas was initially seen as a person Israel and the West could do business with in terms of negotiating an end to the endless conflict in the Middle East. 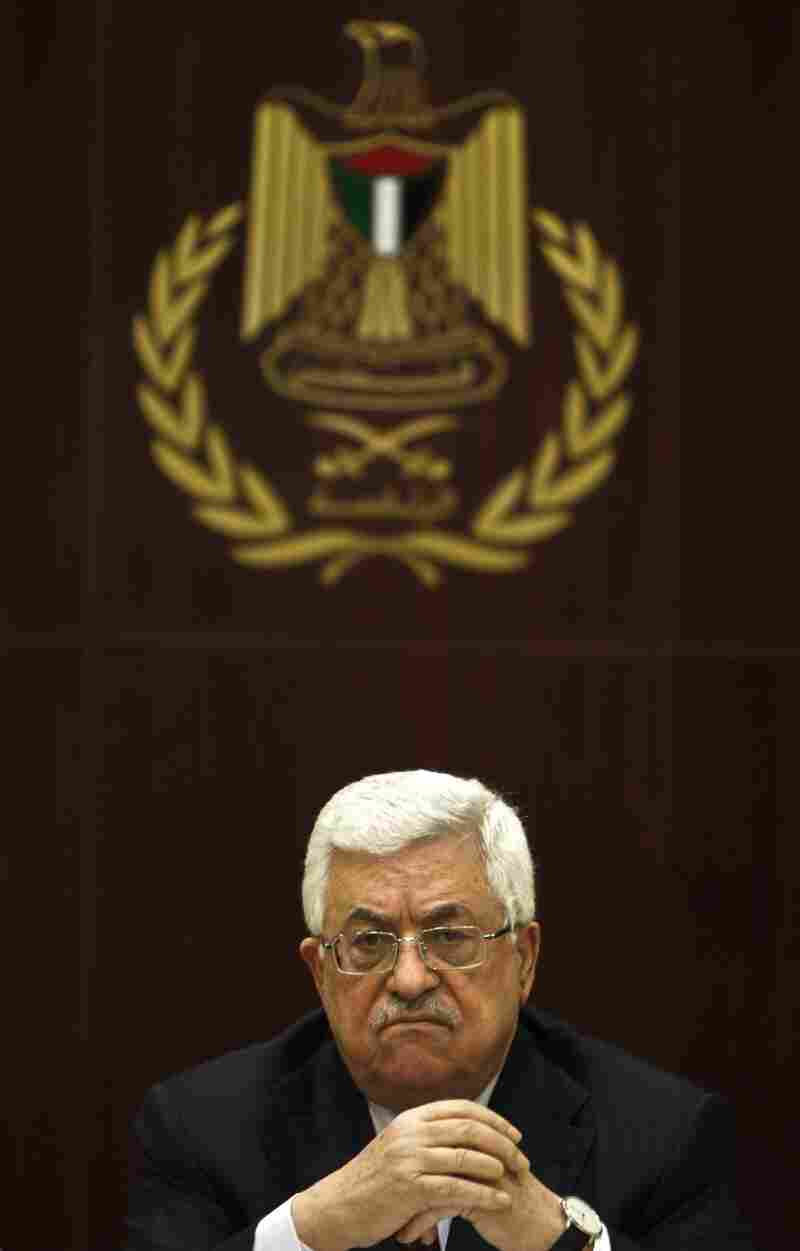 Abbas attends a meeting of his Fatah movement at its headquarters in Ramallah on Jan. 29. Atef Safadi/EPA/Landov hide caption 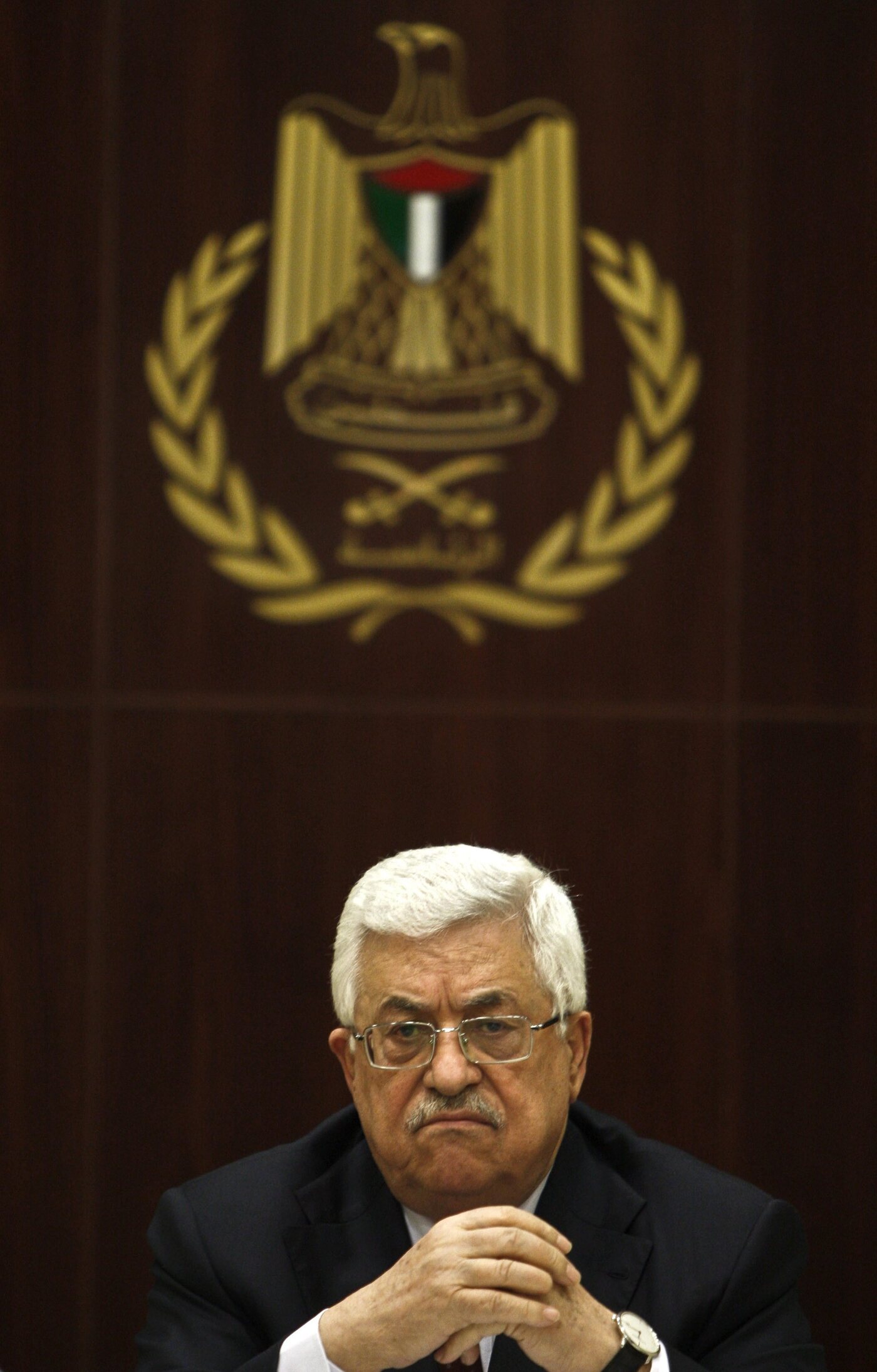 Abbas attends a meeting of his Fatah movement at its headquarters in Ramallah on Jan. 29.

But the peace process is paralyzed with little prospect of becoming ambulatory any time soon. And so Palestinians, like Israelis, have turned away from engagement with the other side and are looking inward.

What they are seeing isn't good, analysts say.

Bashir Rayes, an economist who teaches at the West Bank's Birzeit University, notes that unemployment is about 24 or 25 percent.

"The picture gets gloomier for a Palestinian family of mother, father and three children," Rayes says. "The poverty line is 2,240 shekels [$550]. Talk to taxi drivers, talk to ordinary people outside of Ramallah, they can barely make 2,000."

Of course, the Israeli occupation has stymied the West Bank's economy. But the Palestinian Authority under Abbas, Rayes says, hasn't done what is needed.

Right now, the Palestinian Authority needs $200 million a month to pay the salaries of the workers on its bloated payroll. Half of that comes from revenues transferred by the Israelis. The rest comes from international donors, but donor commitments have dried up.

Rayes says the Palestinian Authority has no economic plan. It commits to government jobs it can't afford while not thinking of ways to stimulate growth.

"The occupation is to blame generally, but we as Palestinians could have done [a much better] job in managing the internal affairs. Not having a plan has nothing to do with the Israelis," Rayes says.

Lack Of Confidence In Leadership

Husam Zomlot is an adviser to the Palestinian Authority. He says Abbas and his government have transformed the situation for the better.

"This is a man who has been able in the last seven years to do a miracle, to turn a corner, to impose law and order, to bring us back into the positive energy, to build institutions," Zomlot says.

But Rayes says people are not convinced anymore that the current leadership can provide a better future.

"People do not have hope anymore," he says. "There is nothing to look forward to. And this is devastating. This is very serious [in] the long run."