Accessibility links
Greece's Latest Crisis: Rising HIV Cases Despite having one of the lowest HIV rates in Europe, Greece's recent jump in the number of infections, particularly among injecting drug users, is alarming. Health workers blame cuts in health and social services, including the end of what had been a successful needle exchange program. 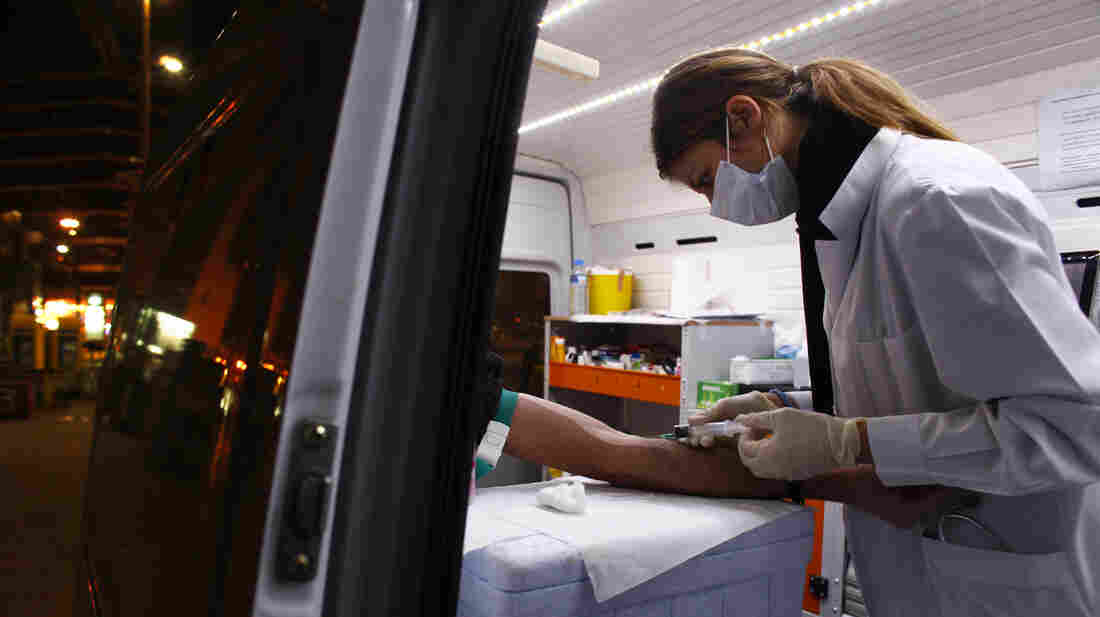 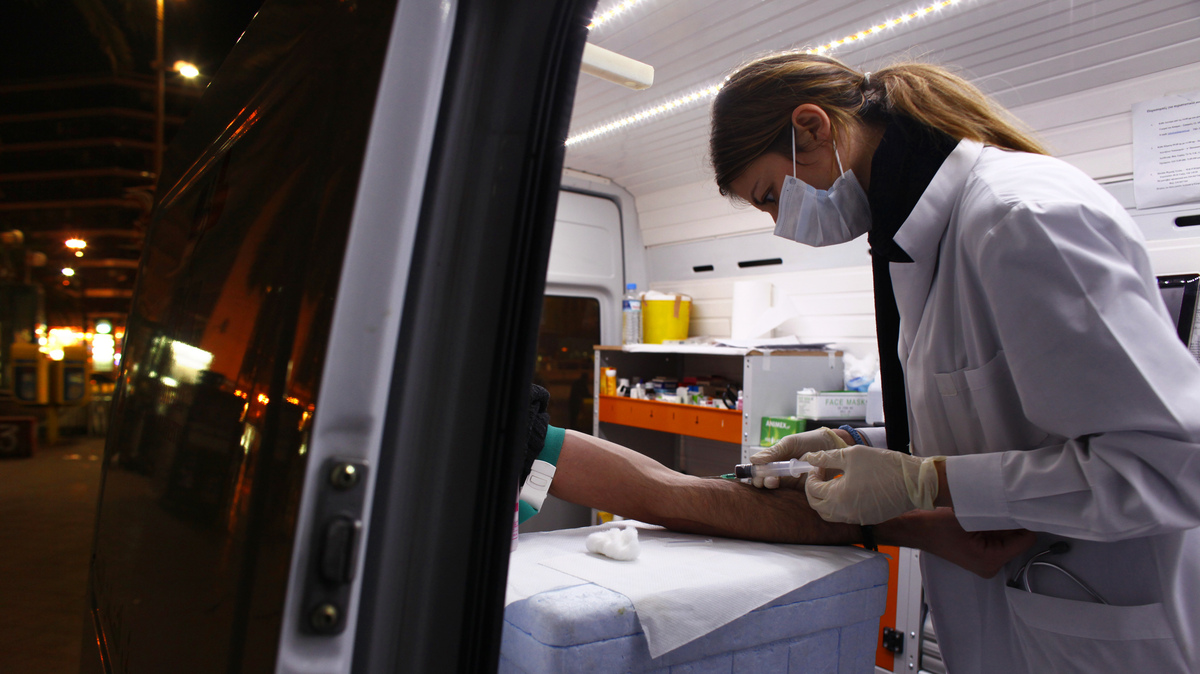 Nurse Maria Vatista draws blood from a Greek drug addict for an HIV test in a mobile testing van in Athens last year. HIV infection rates are rising, as Greece's financial crisis has led the government to cut health and social services, including a successful needle exchange program.

One of the alarming consequences of the financial crisis in Greece appears to be a sharp rise in the rate of HIV infection.

The country, which is struggling through a historic debt crisis and a deep recession, still has one of the lowest HIV infection rates in Europe. But budget cuts to health and social services seem to be driving a recent and dramatic increase, especially among injecting drug users.

About 20 recovering drug users gather daily at the Off Club, an outpatient community center in central Athens. On a recent day, one is making lunch wearing a surgical mask and gloves.

"We assume that everyone here either has AIDS or hepatitis C, so we have to be careful," says center director Panagiotis Saivanides.

A 60-year-old recovering heroin addict who gives his name as Yiannis explains how he contracted hepatitis.

"I caught it because the pharmacies refused to give me clean needles," he says. "I tried to buy a syringe but the pharmacist didn't even want to look at me, let alone give me anything."

The rate of HIV infections (shown here by year per 100,000 people from 1984 to 2011) has seen a sharp rise since the beginning of the Greek financial crisis.

There had been a program for injecting drug users to exchange dirty needles for clean ones.

But the government canceled this needle exchange program in 2011 because of budget cuts.

Dirty needles are now responsible for a big increase in HIV infections.

Sex, Drugs And The Spread Of HIV

The country still has one of the lowest HIV rates in Europe. Only about 12,000 people have the virus in a country of 11 million.

But the rate has gone up 60 percent since 2010. And among injecting drug users it's increased nearly 1,500 percent, according to the Hellenic Center for Disease Control and Prevention.

A 35-year-old recovering heroin user who gives her name as Marilena says she knows HIV-infected injecting drug users who have sex for money.

"I know what they were doing on the streets," she says. "I know what kind of people they had sex with, and that they never used condoms."

Prostitution is only legal in licensed brothels, where sex workers are required to get regular health checks. Most of the 15,000 prostitutes in Greece work here illegally, mainly on the streets of central Athens, says Eleni Kakalou, a doctor who specializes in infectious diseases and treats people with HIV.

"And prices for commercial sex work have gone dramatically down," especially when addicts are using sex to pay for a fix, Kakalou says. "They say they would have sex for 5 euros ($6). I've even heard 2."

Earlier this spring, ostensibly as a pre-election crackdown on crime, police arrested 17 women with HIV who allegedly worked illegally as prostitutes. The names and photos of some of the women were posted on the police website.

Kakalou says Greek authorities received more than 4,000 calls — mostly from middle-aged men with families who said they had unprotected sex with the women. 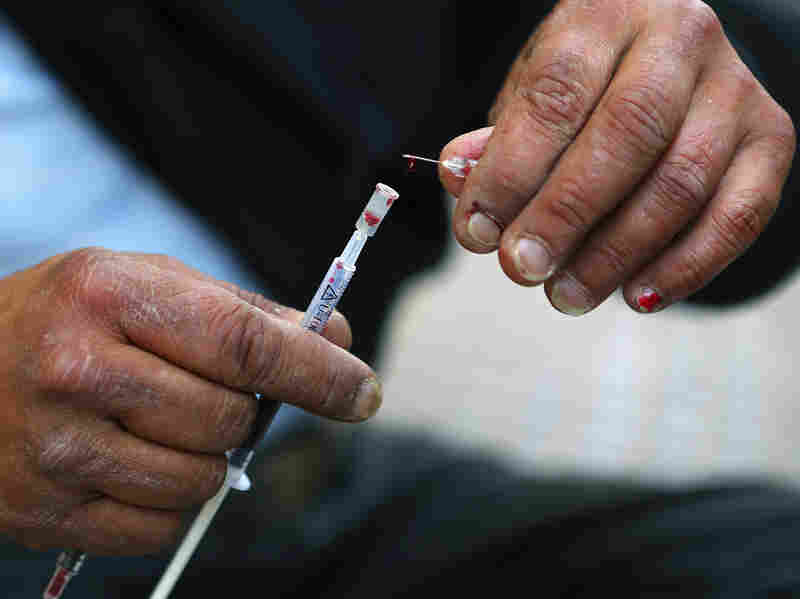 Vicky, a 40-year-old, Canadian-born, Greek drug addict, takes a drop of her own blood from a syringe as she prepares to inject herself with a mix of cocaine and heroin on a central Athens side street, April 30. Yannis Behrakis/Reuters/Landov hide caption 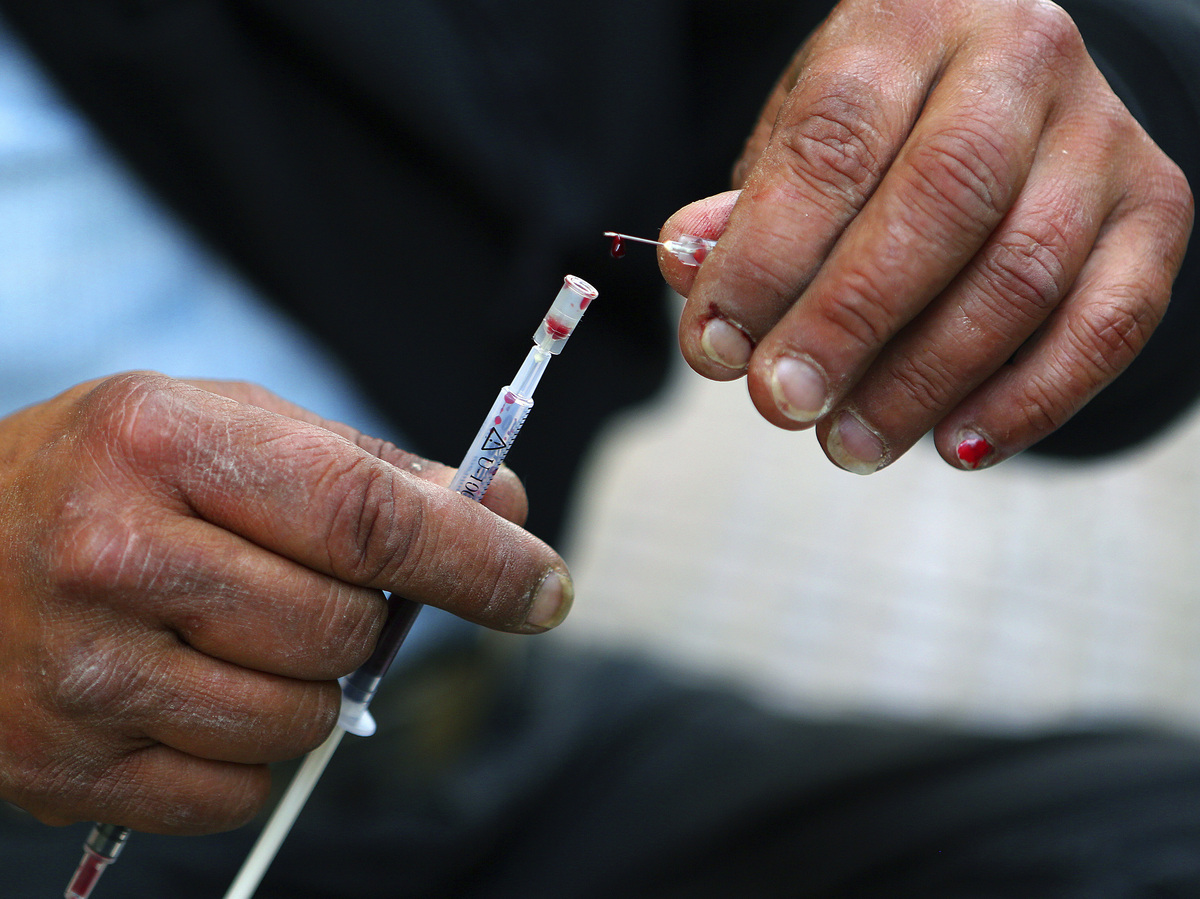 Vicky, a 40-year-old, Canadian-born, Greek drug addict, takes a drop of her own blood from a syringe as she prepares to inject herself with a mix of cocaine and heroin on a central Athens side street, April 30.

"I think that just the fact that people are buying in these conditions commercial sex and they demand the non-use of condom as many of them have families — women, children that are completely unaware — shows the fact that there is a huge gap of knowledge and perception," she says.

Need For Better Strategy, And On A Budget

Yet others in Greece believe they can contract HIV simply by shaking the hand of an HIV-positive person, says a man who gives his name as Marco. He's gay and got the virus 13 year ago through unprotected sex. He says HIV is still a very stigmatized disease.

People "are scared of touching you" and "of the air, of the water, of everything" around you, he says.

Most people living with HIV in Greece are gay men. Marco says that the most people in the gay community are careful about condom use, though he acknowledges that he still knows of risky behavior.

Apostolos Veizis, head of the medical support team for Doctors Without Borders, wants Greece to set up a strategy for educating more people about HIV to stop its spread, especially among injecting drug users.

"All of us saw a situation going out of control," Veizis says. "It's something that did not come from one day to another. Authorities were seeing the situation, and I think they did not do anything, essentially, responding to the problem."

At the very least, the government does plan to restore the needle exchange program. But what else can be done, since the country is broke?

Veizis says Greece should consider Uganda, a developing nation that successfully managed the spread of HIV on a limited budget, using methods like an extensive public education campaign emphasizing condoms, monogamy and abstinence.