Accessibility links
Chick-Fil-A Gay Flap A 'Wakeup Call' For Companies Chick-fil-A's president has publicly defended his company's controversial stance against gay marriage. The fast-food chain is hardly the first business to get caught in the crossfire of culture wars. 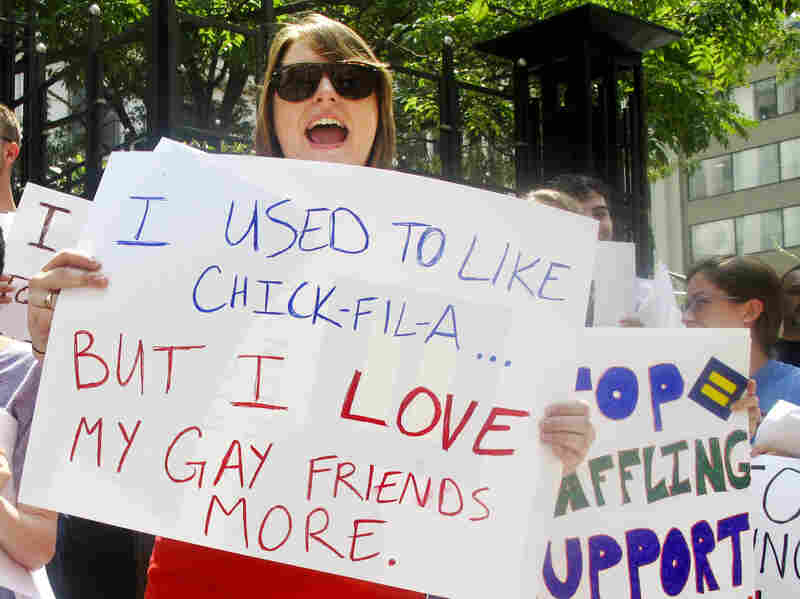 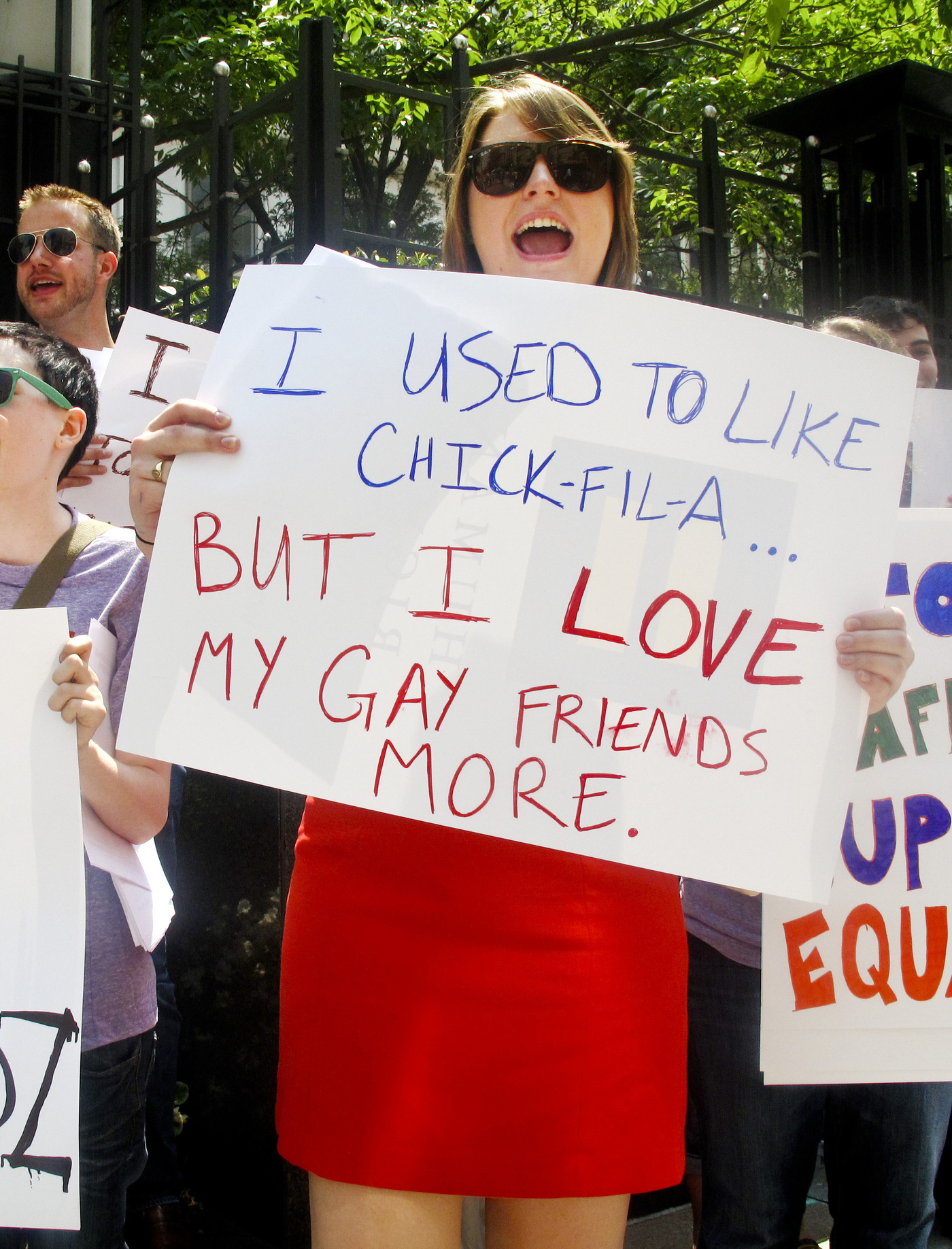 Atlanta-based Chick-fil-A has long stood by its Bible-based roots, keeping stores closed on Sundays and donating millions to Christian causes. But when its president, Dan Cathy, went public to defend his company's stance against gay marriage, he set off a considerable controversy that has everyone from politicians to puppets weighing in.

First telling the Baptist Press his company supported the "biblical definition of the family unit," Cathy then told the radio program The Ken Coleman Show, "I pray God's mercy on our generation that has such a prideful, arrogant attitude to think that we would have the audacity to try to redefine what marriage is all about."

The backlash spread swiftly. Boston's mayor pledged to block the chicken sandwich stores from opening in Beantown, a Chicago alderman said he'll try to stop a franchise from opening in his ward and the Jim Henson Co. cutoff its Chick-fil-A collaboration. Because it's a private company, it will be difficult to measure the bottom-line impact of all the attention.

Americus Reed, a marketing professor at University of Pennsylvania's Wharton School who studies brand loyalty, says Cathy underestimated what might happen once his comments to a niche religious publication and a syndicated radio show spread to a wider audience.

"I think this is part of the wake-up call for companies to understand that social media makes these decisions very, very risky," Reed said, "because it's much easier now for these messages to get out to consumers and consumers to virtually organize."

The Chick-Fil-A Flap: A Recap 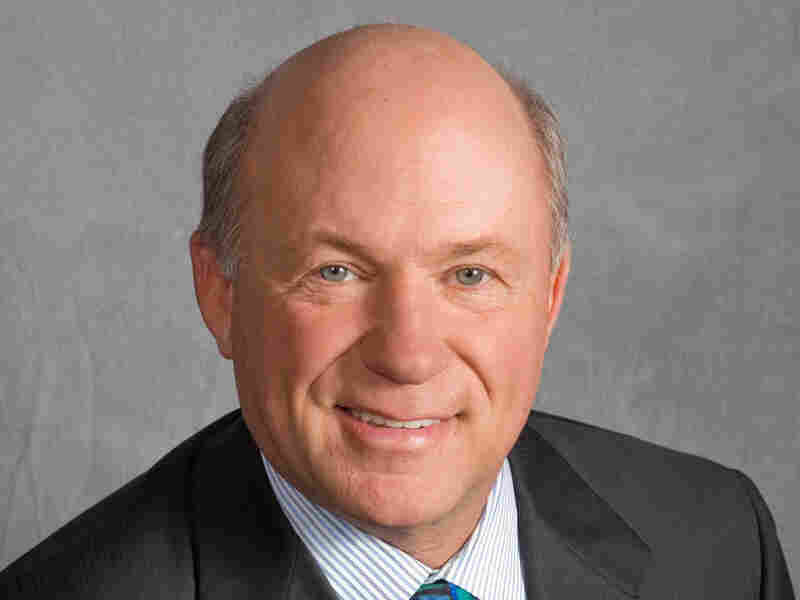 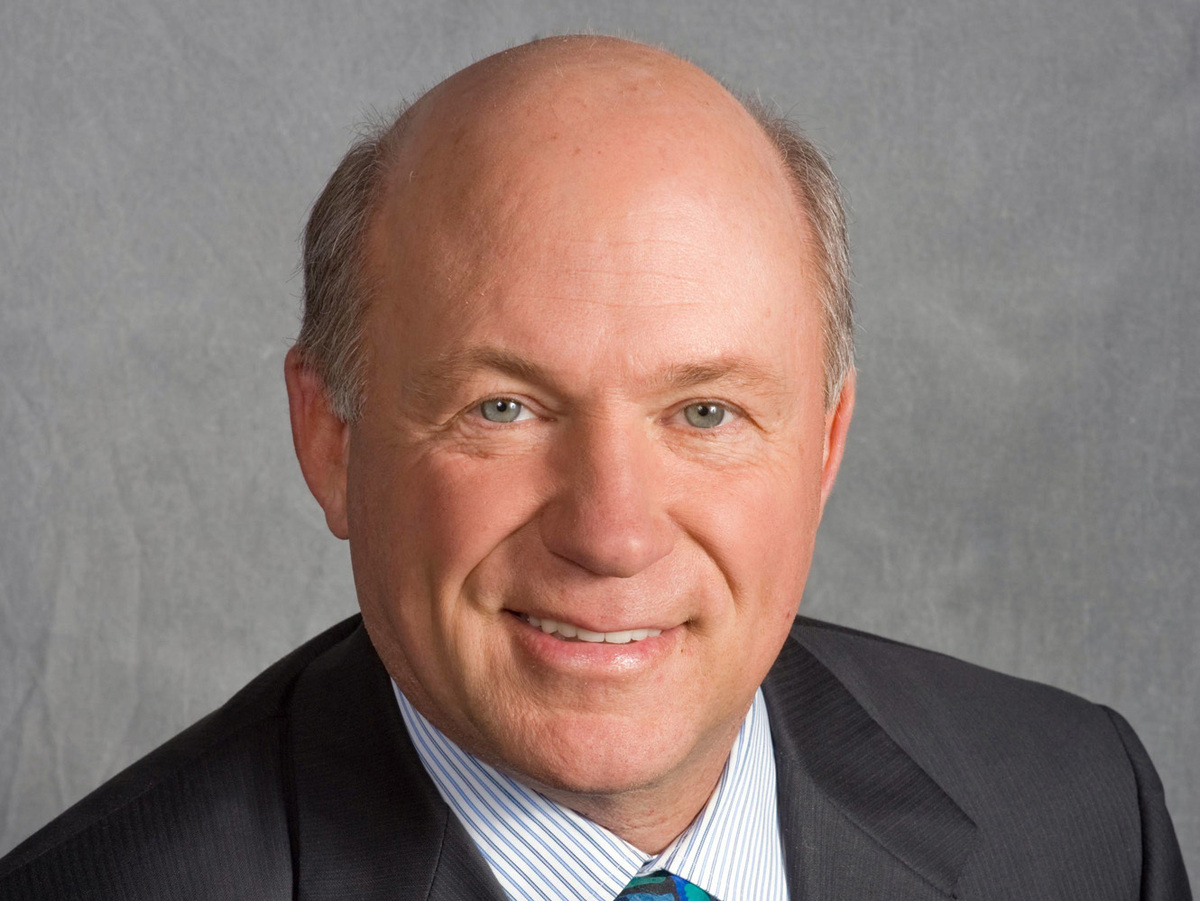 What does a famous chicken sandwich have to do with a polarizing political issue? The connection has long been clear to gay rights groups, which have tried to call attention to the millions of dollars Chick-fil-A, through its charitable arm, has donated to opponents of same-sex marriage. But never before has the Atlanta-based chain been thrust into such a swirling controversy over its faith-based positions. A quick recap of how Chick-fil-A suddenly found itself at the center of one of America's hottest social debates:

Company President Dan Cathy gives an interview to the Biblical Recorder newspaper, which is re-posted in the Baptist Press, saying, "Well, guilty as charged," when asked about the company's support of the traditional family. "We are very much supportive of the family — the biblical definition of the family unit. We are a family-owned business, a family-led business, and we are married to our first wives. We give God thanks for that."

On the Chick-fil-A Facebook page, the company posts a statement saying it's staying away from further discussion of the gay marriage debate. "Going forward, our intent is to leave the policy debate over same-sex marriage to the government and political arena," the posting said. Company spokesmen sent the same statement to NPR when we requested an interview.

The Jim Henson Co., which controls the popular Muppets characters, announces on its Facebook page that it's cutting off its collaboration with Chick-fil-A in response to Cathy's comments. Coincidentally, the Jim Henson Creature Puppets that were to be distributed in Chick-fil-A kids' meals through August were pulled due to "product safety" reasons a few days later.

Boston Mayor Thomas Menino writes a letter to Chick-fil-A vowing to block the fast-food chain from opening a franchise in Beantown. "There is no place for discrimination on Boston's Freedom Trail and no place for your company alongside it," the letter reads. Since the move by Menino, a Chicago alderman and the San Francisco mayor have followed suit, saying the company should stay out of their cities.

In response to the firestorm, former Arkansas Gov. Mike Huckabee calls on Christian customers to show support for the company and stick up for Cathy's values. "The goal is simple," he announced, calling on Americans to help those who honor "the godly values we espouse by simply showing up and eating at Chick-fil-A on Wednesday, Aug. 1." As of 11:30 a.m. Friday, Huckabee's Chick-fil-A Appreciation Day already had more than 279,000 RSVPs.

But other companies see the risks of going public on controversial issues differently. This year, a handful of big brands have made headlines for taking the opposite side — supporting same-sex rights and benefits.

"From time to time we are going to make a decision that we think is consistent with the heritage and the tradition of the company that perhaps may be inconsistent with one group's view of the world," Howard Schultz, Starbucks CEO, said at a shareholder meeting in March.

He explained the coffee giant's pro-gay positions were about making its employees proud — and aligning with its corporate values.

"Since we made that decision there has not been any dilution whatsoever in our business, and as you can see, shareholder value has increased significantly," Schultz said, citing revenue growth in the face of efforts like DumpStarbucks.com, led by pro-family organizations.

"I think it's a sign of the times to try and speak to other groups that potentially one has not had a connection with, and that's just part and parcel with trying to grow your market," Reed said.

But beyond the big bucks, corporate reputation specialist Sekou Bermiss says companies may be motivated to contribute to community good.

"More and more, you see firms that are trying to or feel obliged to certain issues in society, [to] do some greater good in society," Bermiss said.

Starbucks, Target and General Mills all stepped into the same-sex marriage issue by supporting gay marriage legislation in their home states. Each face ongoing boycotts led by the American Family Association and the National Organization for Marriage for doing so. The National Organization for Marriage said it's uncertain whether its boycotts are having an impact on businesses.

And after JC Penney hired Ellen DeGeneres as its spokesperson, the socially conservative group One Million Moms called for her firing.

"They wanted to get me fired and I'm proud and happy to say that JC Penney stuck by their decision to make me their spokesperson," DeGeneres said on her show. The retailer also started running Mother's Day and Father's Day ads featuring same-sex couples.

But Reed says companies that make a social argument for business gain should be prepared to change course if an outcry leads to longer term losses.

"Most brands are keeping their heads down because these are very controversial sorts of strategies. And it probably makes sense — good business sense — to not weigh in on these issues," Reed said.

That's a lesson Chick-fil-A seems to be learning quickly.

It declined requests for an interview, but in a statement said, "Going forward, our intent is to leave the policy debate to the political arena."