Accessibility links
'Fresh Air' Bids Farewell To Melody Kramer She's never been heard on the show, but producer Melody Kramer has created a singular voice for Fresh Air online and in social media. Today we send her off, affectionately, to medical school and the next phase of her career. 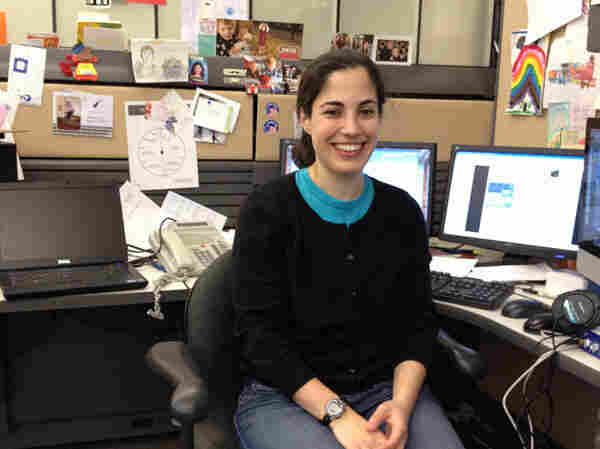 Today, reluctantly, we say goodbye to someone our listeners may have come to feel attached to, even though they've never heard her voice on our show.

Until about 3 years ago, we were so obsessed with getting Fresh Air on the air every day that we were virtually ignoring all the social media possibilities, and our website was pretty bare-boned. Then we hired Melody Kramer to be our associate producer for online media.

She whipped the website into shape, writing print stories based on our interviews, and she developed a great following on Twitter, with tweets that sound like she does — smart, funny and worth paying attention to.

After one of our guests, a fitness columnist, talked about how important it was for people who work at desks to stand up every 20 minutes, Mel performed the public service of tweeting stand up reminders three times every hour.

Before nearly anyone had heard of the microblogging service Tumblr, she created one for Fresh Air, and has since filled it with photos, videos, quotes, facts, jokes and puns related to our interviews.

Mel started a weekly feature called "best thing all week," which gave our followers a chance to hear from each other. Mel once even gave a lucky reader some pretty decent advice about handling the breakup of a relationship.

When not working on our show, she's spent a lot of time volunteering at a hospital and an HIV clinic. So I wasn't really surprised when she told us she planned to go to medical school, so that she can be a doctor and medical journalist. That sounds just right for her, but it's a great loss for us.

We'll miss her voice in the virtual world — and here in our office, where she's become a trusted colleague and friend.

Considering the millions of followers she's brought to our sites, you may be surprised to hear how much Mel hates being the center of attention. Really. But since so many of our listeners know her social-media voice, I didn't want her to get away without you hearing her spoken voice — so in the audio above, you'll hear a few words of farewell directly from her.