Accessibility links
Rebirth: From Millionaire To Prisoner To Pastor Vernon Jackson thought his telecommunications invention would bring him wealth and success. But his dealings with a corrupt congressman eventually landed him in prison. He has since emerged from prison, reinvented as a man of faith. 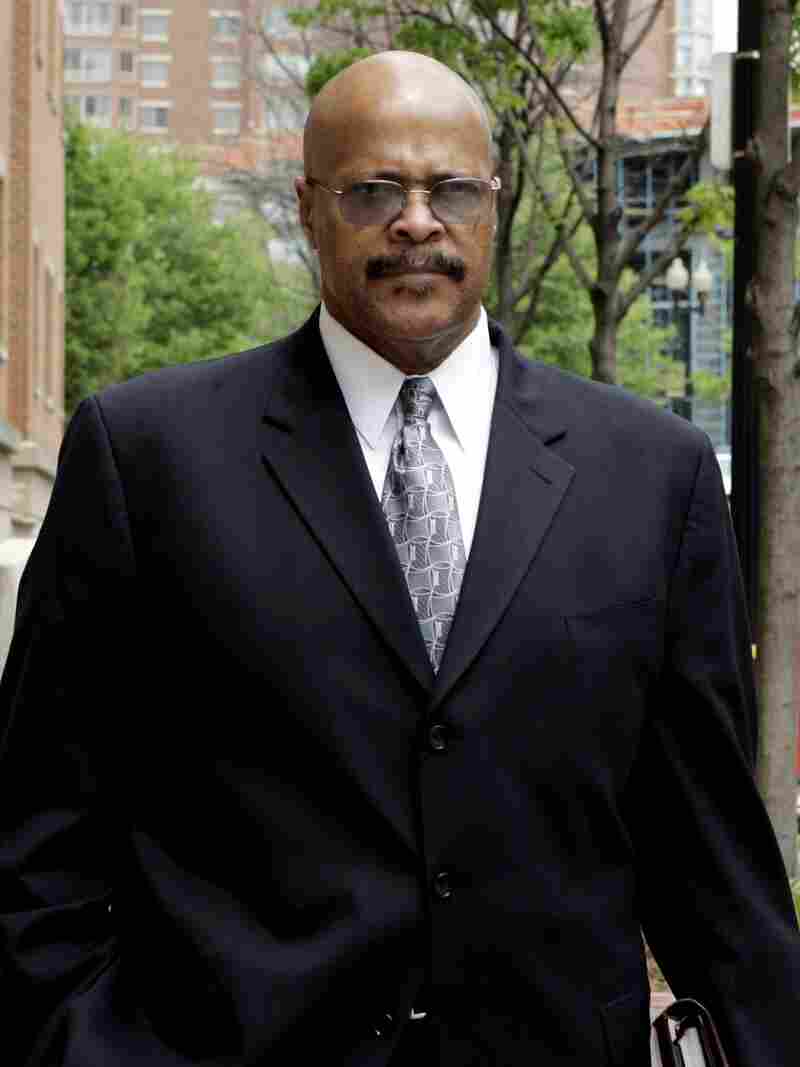 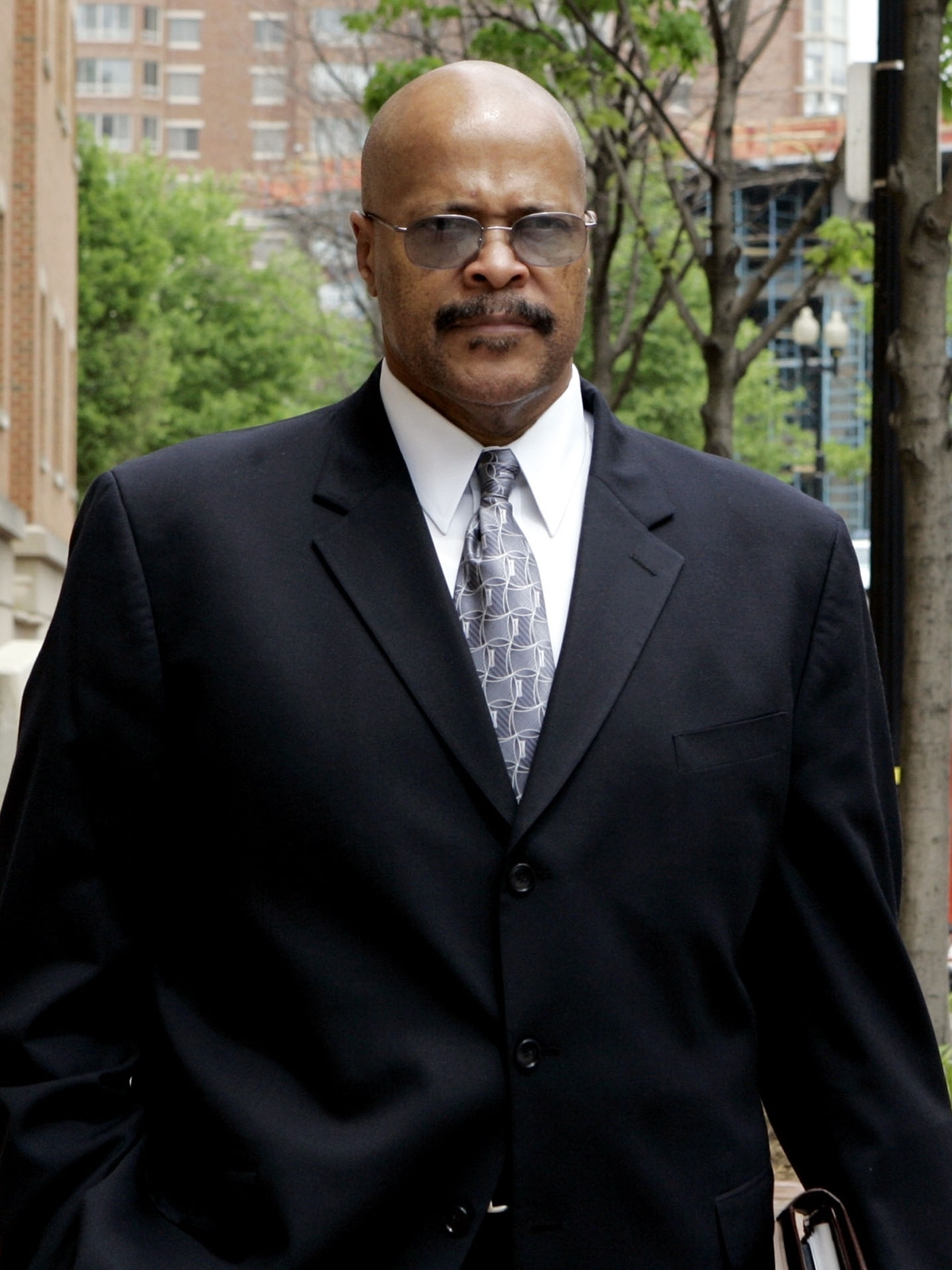 Vernon Jackson leaving the U.S. District Court in Alexandria, Va., in 2006. He later went to prison for three years on bribery charges.

Once a tech millionaire, this pastor from Louisville, Ky., thought his telecommunications device would bring him wealth and success. And it did, but only for a time. Ultimately, his business dealings landed him in prison.

Jackson's story is about making it big, blowing it even bigger — and coming back, renewed.

Today, he can laugh about his roller-coaster-like transformation.

"To go from a master to a servant," he tells Robert Siegel, host of All Things Considered. "[Once] I gave orders ... and now I take orders" — from God.

'We Didn't Have The Choice To Fail'

These days, Jackson spends his Friday mornings with a Bible study group in the lobby of a suburban Holiday Inn. The group is made of up middle-aged black men, pastors and professionals.

At 60, Jackson still looks like a man who gives orders. He's an imposing 6 feet 4 inches tall. He weighs almost 300 pounds and sports a shaved head and goatee.

Jackson grew up in humble circumstances in Charlotte, N.C. His father mopped floors weekdays in a local public school and preached in an Apostolic church on Sundays.

Jackson says he caught a break at 17 with an AT&T affirmative-action program. He was trained in electronics and sent to work in Louisville.

"We had to do better than the majority because we were considered minority. Expected to fail," Jackson says. "So we didn't have the choice to fail. So we insisted on whatever they threw to us, we would make it work."

He became a network supervisor, and did well. He felt comfortable and secure.

The Equal-Opportunity Culture of Corruption

"I wasn't poor," Jackson says. "It was a great middle salary."

After 20 years at AT&T, Jackson struck out on his own. He had an idea. His invention made copper wire — old-fashioned telephone lines — broadband-capable.

"I saw the need," Jackson says. "I saw an opportunity and I was driven by the fact that I believed it was doable."

It was the 1990s, and the U.S. economy was in the throes of the telecom bubble.

Jackson started a company that went public, obtained a patent and started making his device. He figured black neighborhoods and African countries would be the last to be rewired with modern fiber optics. Those communities, he thought, were on the wrong end of a technological divide, and he had the device to bridge it. With his invention, he thought, the poor could get access to teleconferencing and email — and he could get rich.

Jackson's company was valued at more than $1 billion at its initial public offering in 1995. His personal wealth was soon valued at around $30 million.

But between competition and problems with financing, the company went broke.

So Jackson started a second company, iGate. But, again, there were financing problems. Jackson recalls a conversation with a potential investor who was white.

"He said, 'Let me tell you something. Because of the color of your skin, you will never get the money you need. You need me, or somebody with my complexion,'" Jackson recounts.

Jackson says that conversation made him angry — and even more determined to succeed. But the company still needed an angel investor. Jackson soon found an angel: Rep. William Jefferson, D-La.

Although his benefactor didn't have money, as a senior member of the Congressional Black Caucus, Jefferson had power.

"His relationship to me was to make sure that my products and services got installed in ... places he had influence," Jackson says. "Jefferson was a very influential and powerful man."

But he was a corrupt one, as well — known to his detractors in Louisiana politics as "Dollar Bill."

But Jackson says he had never heard that, and that he trusted Jefferson. The congressman became iGate's advocate, drumming up business for the company in the U.S. and Nigeria.

Little did either man know, Jefferson was being monitored at the time in an FBI sting operation — and Jackson was caught up in it.

In 2001, after Jefferson had helped iGate win some business, the congressman suggested the two men begin a new relationship.

Jackson recalls the conversation when that relationship began.

"He says, 'I've really done all that I can do, but you need to be marketed at a high level. So, I can't do that per se, but there's a company owned by my wife and my daughters who do just that,'" Jackson recounts Jefferson telling him.

Jackson started paying that company $7,500 a month, and transferring shares of stock, as well.

"I remember saying something [like], 'You sure this is OK?'" Jackson recalls asking Jefferson. "Because I saw a little red flag. And he said, 'Of course! I wouldn't steer you wrong. This is my wife, my daughters.'"

In retrospect, Jackson says he was, in effect, bribing a public official. But at the time, he says, he didn't realize it.

The arrangement went on for five years, until a night in late May 2006, when the FBI raided Jefferson's office. The congressman was indicted, later tried and convicted. He is remembered as the congressman with $90,000 in cash in his freezer.

Jackson pleaded guilty, testified against Jefferson and went to prison for three years. Along the way, he says, he found religion in dreams and visions. He declared himself a pastor, ordained by God.

'The Moment Of Truth'

But what makes an otherwise law-abiding businessman write his own ticket to federal prison? Why say "yes" when Jefferson told him to sign a deal with his wife?

Jackson calls it "the moment of truth."

"What's in one's heart determines what one does," he says. "We had had so much difficulty getting to this point, in terms of all the raising the money and so many hurdles we had overcome."

Knowing there were people willing to pay for their product and feeling confident it would be a success, Jackson says he felt he had to move forward.

"We know it's worth billions, so the shareholders will do well," Jackson says. "We're looking at our own glory, if you will, we will do well. And so you say, 'You know what? I'm going to go down this road, and see where it takes us.'"

Jackson says he knew he had a product that could do good.

In the end, it was Jackson's life that changed.

He's at home a lot these days. He takes care of his wife, whose back was broken in a car crash. He says he does some consulting. And his device to make broadband connections over copper wire is still being marketed, now by a firm in Houston.

Jackson keeps a white Christmas tree in his living room, even in the middle of summer.

"Ever since I walked back into this house [from prison], I've insisted that this tree is on, each and every single day."

It stands for Christ, he says. He has a problem, Jackson says, of celebrating him just once a year.

"The scriptures even say, in my house there shall always be a light," says Jackson.

For a man who once had a mansion in the works, who was worth millions and dreamed of billions, and who used to hobnob with Nigerian high rollers, Jackson's life these days is modest.

And it is a very American second act: The self-inflicted wounds of an outsized ambition, bathed in faith — a different kind of American dream.