Accessibility links
The Opening Ceremonies In London: From The Industrial Revolution To Voldemort The London Olympics opened Friday with a ceremony that was full of spectacle and pride and, unfortunately, some not-so-good television commentary.

The Opening Ceremonies In London: From The Industrial Revolution To Voldemort

The Opening Ceremonies In London: From The Industrial Revolution To Voldemort 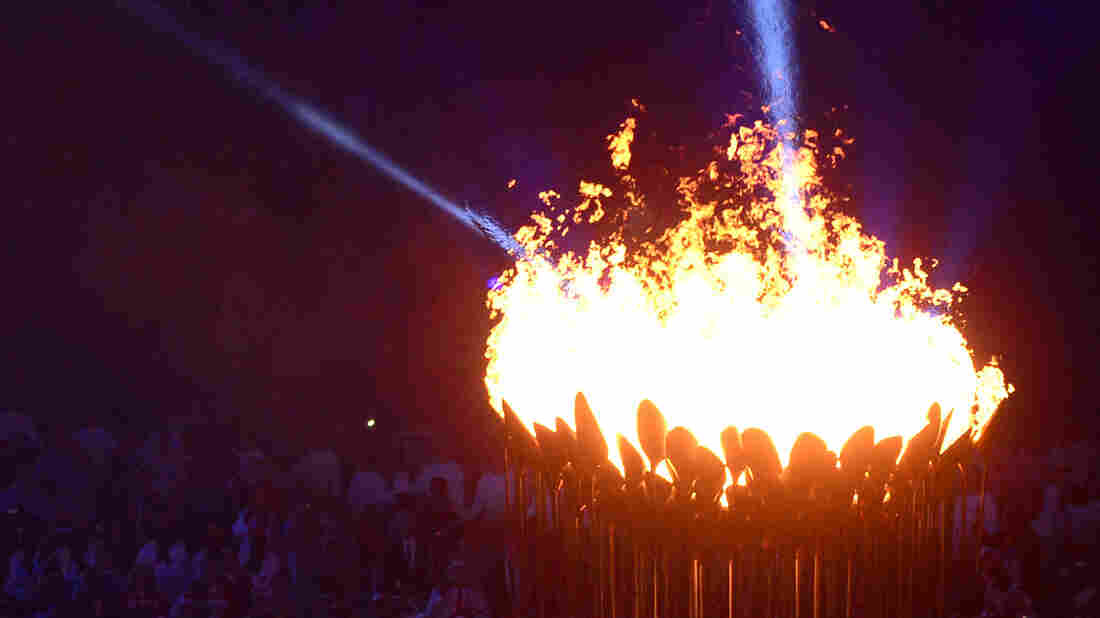 The Olympic Flame is lit during the opening ceremony of the London 2012 Olympic Games at the Olympic Stadium. Emmanuel Dunand/AFP/Getty Images hide caption 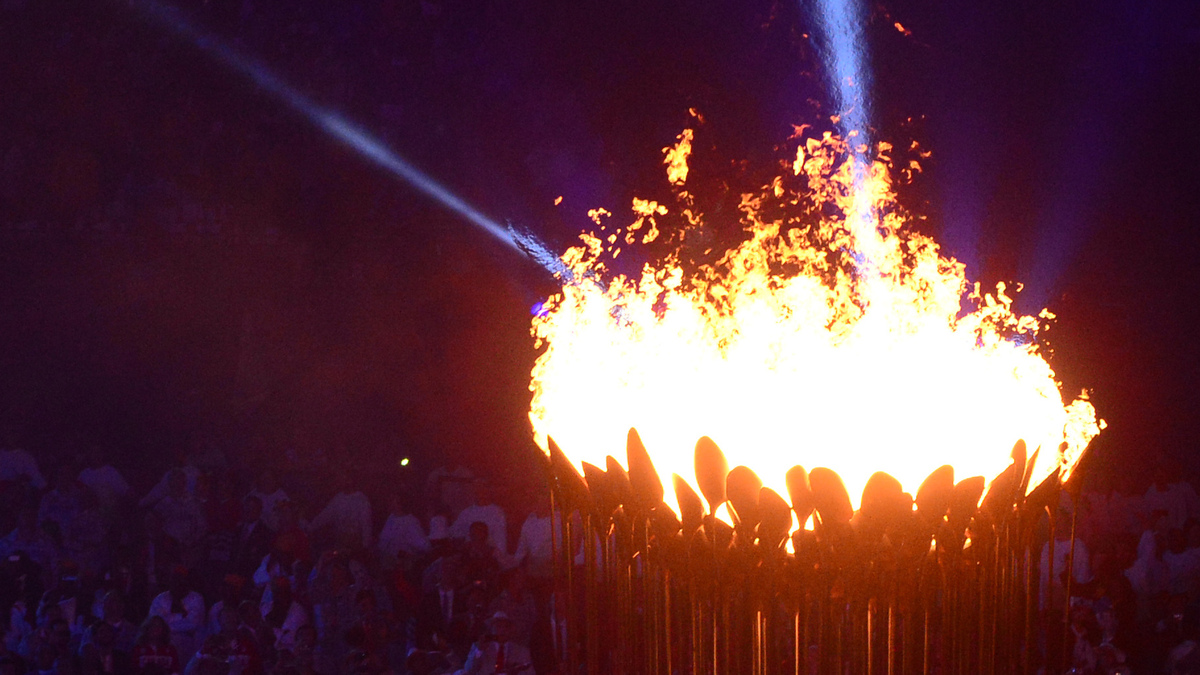 The Olympic Flame is lit during the opening ceremony of the London 2012 Olympic Games at the Olympic Stadium.

The opening ceremonies at any Olympics are tasked with doing quite a bit: providing a splashy experience to kick off the games for those watching both on site and at home, representing the national identity of the home country, and offering stirring entertainment while maintaining the stiff formality with which the Olympics still want so badly to be about something important — not just flashy spectacle, but real pageantry.

The ability of an American television audience to enjoy the ceremonies was hampered by several things: flawed (and unrelenting) commentary, a tape-delay that prevented us from watching at the same time on both coasts, let alone at the same time as the rest of the world, and editing that apparently excised some of the content.

Danny Boyle, director of London's opening ceremonies (and of Slumdog Millionaire), started his production with people dancing about the Industrial Revolution. Specifically, Kenneth Branagh played an industrialist ushering in the era of smokestacks while hard-working people with dirty faces engaged in difficult but rhythmically choreographed menial labor. It made for a strange mood at the opening, since all that had come before was a collection of children's choirs singing from the various parts of Great Britain accompanied by footage of sports figures being tackled and running into things.

Once the smokestacks rose and the Olympic rings were forged (to the great delight of the sideburned, top-hatted industrialists who had been dancing instead of working throughout the entire number, tsk), Boyle presented a short film in which Daniel Craig, as James Bond, went and fetched the Queen to bring her to the ceremony. The gambit in which a body double then jumped from a helicopter pretending to be the Queen was cute enough, except that NBC commentators Matt Lauer and Meredith Vieira, ostensibly newsgathering personalities, duly reported the idea that this was actually the Queen of England jumping out of a helicopter. Come now. There is playing along, and then there is clapping for Tinkerbell in the middle of a news event.

Had the Queen actually been jumping out of a plane, and had she injured herself, she could have been treated by the dancing doctors and nurses who opened the next segment: a salute to the National Health Service and the Great Ormand Street Hospital for Sick Children. (Fortunately for clueless Americans, we had commentators to explain why the giant letters GOSH appeared amid a salute to doctors.) It's an interesting thing, the inclusion of a straight-up government agency in a salute to your national identity. Not something that would happen everywhere, as much as I would like to see some dancing filing cabinets in every Olympics.

The hospital bit led not-quite-seamlessly into a battle, taking place in the dreams of the hospital's sleeping children, between a 100-foot Voldemort puppet and a flock of Mary Poppinses, complete with a reading from Harry Potter's creator herself, J.K. Rowling. It ended with the unveiling of what seemed to be a giant inflatable baby.

Are you following that so far? It was a salute to public hospitals, Voldemort, and presumably healthy birth weights. This is an opening ceremony for you.

After that, Rowan Atkinson (who you may know as Mr. Bean or Blackadder) participated in a comedic parody of Chariots Of Fire, clowning around with the orchestra before a short film showed him knocking over the other runners in a sendup of the famous sandy beach jog.

Perhaps most eyebrow-raisingly, a salute to the crazy teenagers of the digital age culminated in Vieira and Lauer cheerfully chirping that they had never heard of Tim Berners-Lee — who was saluted in the segment and later briefly appeared in it. (He was largely responsible for giving you the internet as you know it, they explained as if they were identifying an obscure British folk hero instead of an enormously important technology pioneer.) Now admittedly, there is a lot of trivia to spit out during the opening ceremonies, and perhaps many people at home didn't know who Tim Berners-Lee was, either, but for crying out loud. They told us the age of the foundry where the giant bell was made. Maybe they could have found time to look up Tim Berners-Lee on Wikipedia and not act quite so baffled.

The editing showed its hand around here in a way that got some attention as the evening wore on. It was somewhere around this time that others, according to Deadspin.com, saw a tribute to those who had passed away — according to the BBC's remarks, specifically to the victims of London's 7/7 attacks. The NBC audience, however, saw an interview between Ryan Seacrest and Michael Phelps. Granted, the opening ceremonies are long, but of all the things to clip out, they may face some criticism for choosing a tribute to people the home country had chosen to remember. That's particularly true when Bob Costas himself spoke critically on the air, when Israel's athletes marched, of the IOC's decision not to recognize the Israeli athletes killed in Munich 40 years ago with a moment of silence.

The biggest chunk of the ceremony is made up of the Parade Of Nations, which became the usual random fact dump-slash-fashion show: It must be cold for the American Samoa team, some of whom aren't wearing shirts! FYI, Australia was a penal colony! The Cook Islands were named for Captain James Cook! Denmark is accomplished in badminton! There is often little logic to the facts chosen for highlighting: The commentators somehow failed to mention or explain the Czech Republic and its shiny blue rain boots, but had plenty of time to talk about the not strictly Olympics-related fact that Finland gives speeding tickets on a sliding scale by income. (Interesting! Not really relevant!)

When the Parade of Nations was over, an Arctic Monkeys cover of the Beatles' "Come Together" accompanied a bunch of doves of peace riding bicycles (it was very late, but I'm quite sure this did indeed happen). Following that, the necessary remarks were made — the purity of sport and so forth — and the Queen, apparently recovered from her whimsical pretend parachute ride, opened the Olympic Games.

The torch was delivered on a speedboat (!) by David Beckham (!!) and then it was run into the stadium. [And then there were some more commercials, as the torch approached. Theme of the night, that.] From there, it went to a group of young athletes, who then lit the elaborate Olympic cauldron, made up of 200 copper "leaves" that were carried in by each delegation. It was an uncommonly inventive effect, to be sure. A few fireworks — okay, a lot of fireworks — and we were in business.

And because you don't leave your most powerful tool in your toolbox on a night like this, they brought out Paul McCartney to lead a singalong of "Hey Jude." Of course they did. Wouldn't you?

It's ultimately very easy to make light of the experience of watching Olympics opening ceremonies on television at home. The thing goes on for hours, the TV broadcast contains an enormous amount of lightweight chatter, it's inconsiderate in delay and editing matters, and there is most commonly a consuming weirdness to these celebrations, no matter who organizes them or where they're held. Two years ago in Vancouver, in fact, we noted in this space "the great tradition of Olympic ceremony production numbers that appear to be inspired by fever dreams." (That opening had fiddlers, tapdancing, and a giant levitating canoe.)

What that fun-having doesn't take into account, though — in addition to national pride that can be quite endearing — is the presence of the athletes. The ceremony often seems silly, but the athletes are so excited to be representing everybody back home that they really are fun to watch. Many hold cameras, some even held iPads — their enthusiasm is oddly infectious, even among all the silliness.