Accessibility links
How Kenya Builds The Fastest Humans On Earth Many of the world's best marathoners come from a highland region where they run along mountainous dirt roads at 8,000 feet above sea level. They're competing for Olympic gold, but real gold inspires them, too. 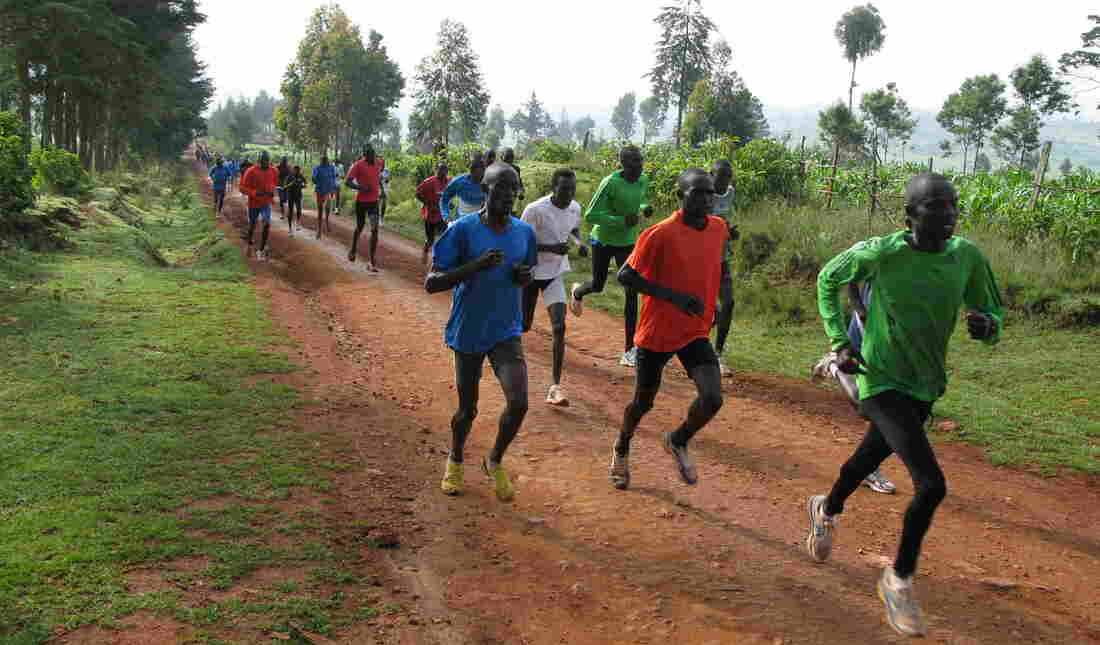 Every day at 9 a.m. sharp in Iten, Kenya, 200 or so runners — most of them unknowns hoping to become champions — train on the dirt roads surrounding the town. John Burnett/NPR hide caption 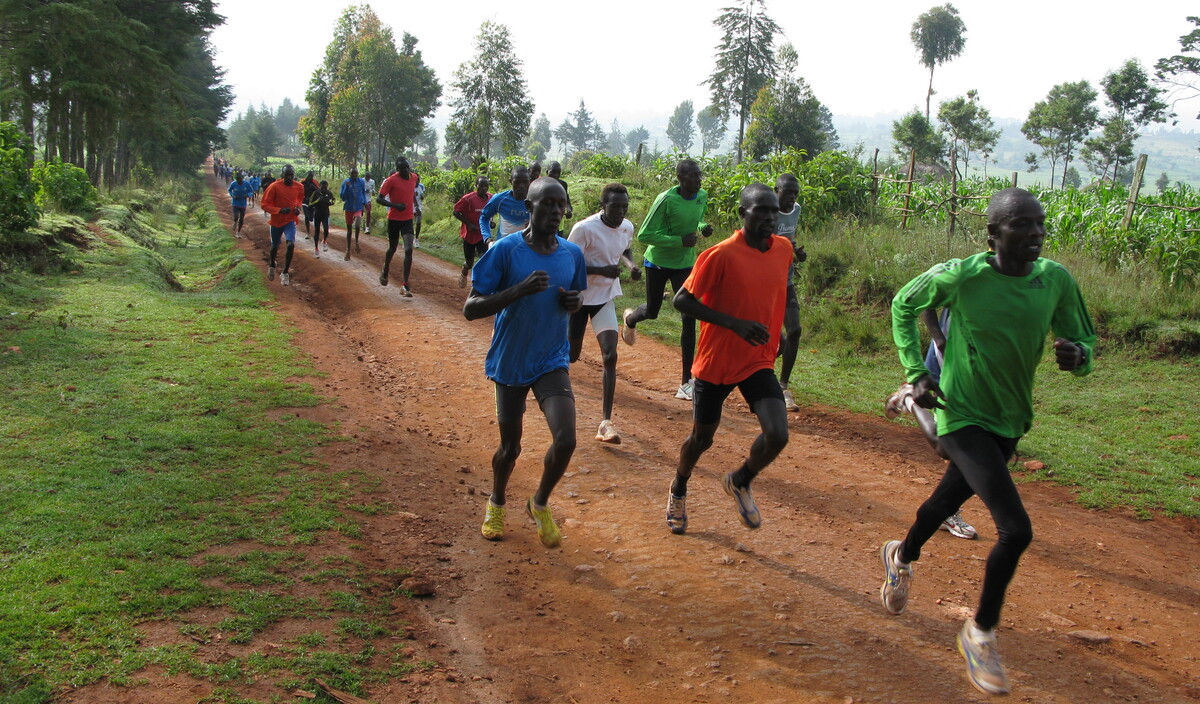 Every day at 9 a.m. sharp in Iten, Kenya, 200 or so runners — most of them unknowns hoping to become champions — train on the dirt roads surrounding the town.

The long- and middle-distance runners to watch during the London Olympics are from Kenya, a country with a rich tradition of producing elite track athletes. The country won 14 medals four years ago in the Beijing Olympics.

Many of the world's best marathoners have come from a highland region above the Great Rift Valley. There, the famed town of Iten produces some of the fastest humans on Earth.

Down the main road, past vendors of mangoes and charcoal, past the Zam Zam Hotel and Mama Mercy Salon and under the arch that reads, "Iten, Home of Champions," there's an unmarked road the color of rust.

If you turn on it and continue past fields of corn and passion fruit, you'll see them: young men and women with zero body fat in black Lycra shorts and bright running shoes warming up for the morning run. 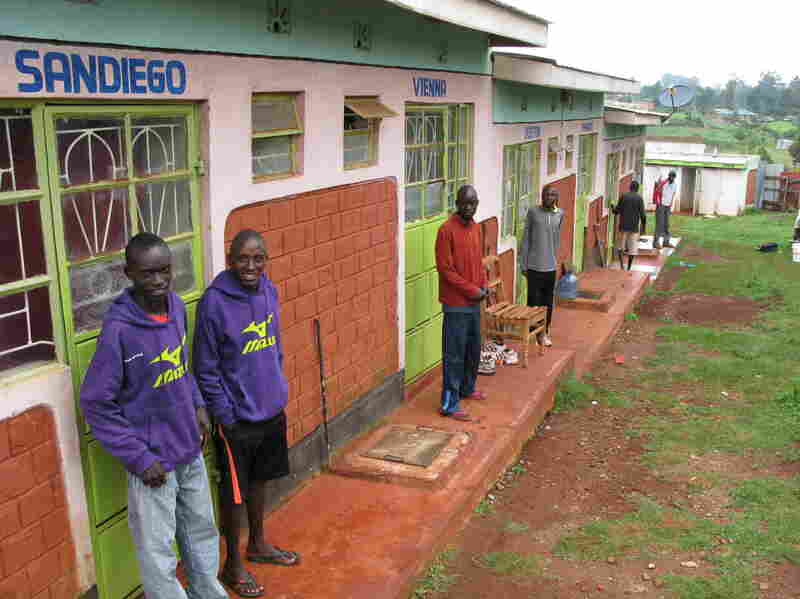 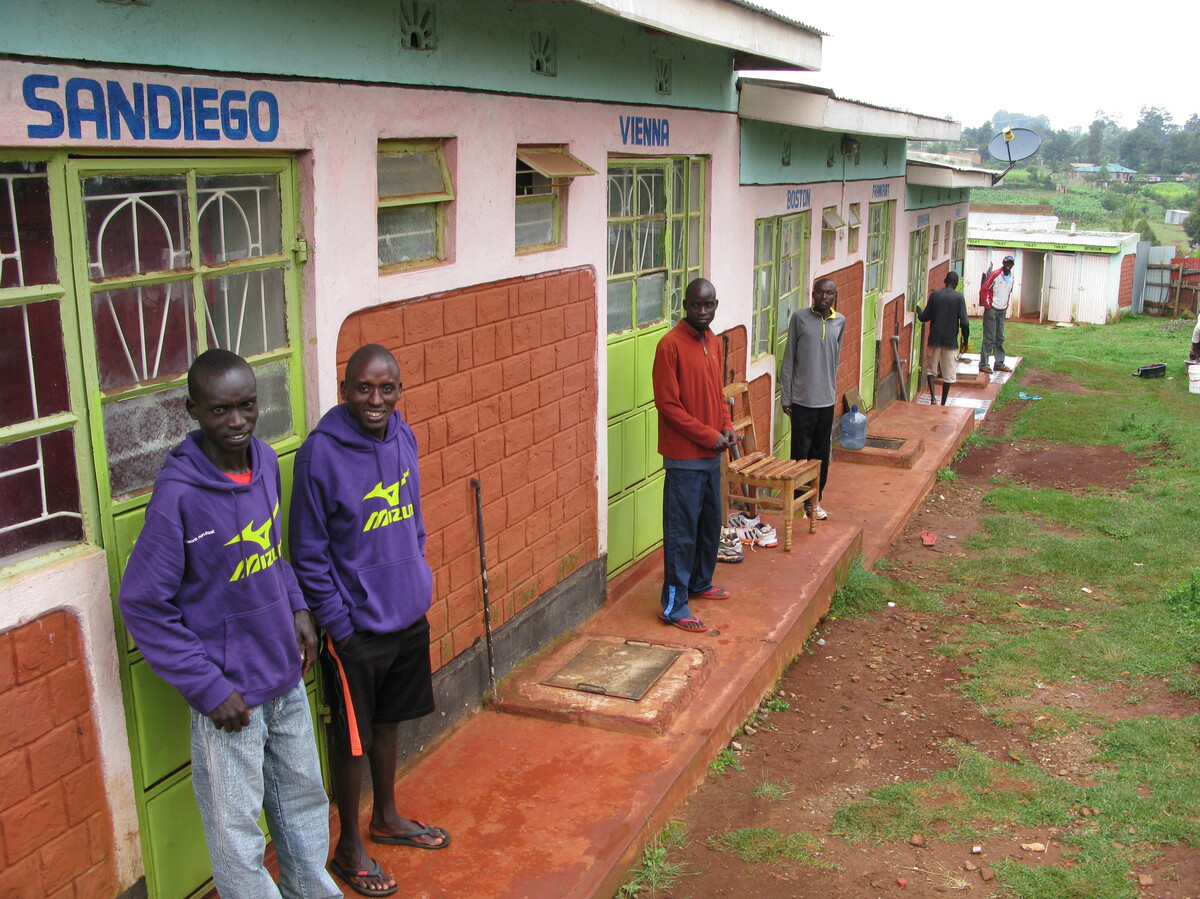 The doors of the Run-Fast training camp dormitories bear the names of famous marathons.

One of them, a woman in a pink Nike top, gives her name as Charity. What's her goal?

At 9 a.m. sharp, they're off, 400 legs pumping uphill in loping, relaxed, efficient strides.

These are some of the 500 to 1,500 runners at any given time who come to Iten from around the world to train and be discovered.

Farmer Robert Toraitizh stands in front of his gate and watches the runners admiringly.

Far behind the rest of the pack, a lone white runner passes, huffing and puffing. Toraitizh smiles ear to ear.

"Yes, you see a small country like that one beating the huge America, even not America but other countries, rich countries," he says.

Training The Next Champions

Kenyans are immensely proud of their athletes — and for good reason.

Wearing a gold-trimmed hoodie, Kipsang lounges on a sofa in the dining room of a hotel that overlooks the Great Rift Valley, which appears as a misty chasm in the green earth.

Kipsang is a local favorite here in Iten because he lets aspiring young runners train with him. The slight, soft-spoken Kipsang is captain of Kenya's Olympic marathon team, which is scheduled to compete on the last day of the games.

Kipsang echoes Charity: He wants to make money. The runners want to live a comfortable life, buy some land, build a house, support their extended family, maybe even invest.

Indian Athletes Want A Medal And A Government Job

Most of Kenya's runners grow up dirt-poor. They see prize-winning runners buying farms, hotels and matatus, the omnipresent Kenyan jitneys. For these young men and women, running is the only means to escape poverty, Kipsang says.

"Provided you really focus and train very well," he adds.

Altitude is another reason why Iten produces such extraordinary athletes. They train at 8,000 feet above sea level. The idea is to strengthen circulation by creating more red blood cells to carry more oxygen to muscles.

"This valley is 6 miles down. They run up these hills every single day," says Peter McHugh, director of Run-Fast, a British sports management company with a training camp in Iten.

"My argument is, for instance, that if you want to build strength in your legs, you should do what the Kenyans do, which is to run up hills," he says. "We are distracted enormously by heart rate monitors, by distance monitors, by very sophisticated gymnasiums, by taking blood tests, by measuring all sorts of things."

Starting With The Basics

The Run-Fast facility here in Iten is not what you'd expect a training camp for aspiring elite athletes to look like.

The muddy compound is fenced with corrugated metal. Runners live in Spartan-like rooms with the names of famous marathons printed over the doorways: San Diego, Boston, Vienna and Frankfurt. Their coach is former champion Kenneth Kibett.

"For those who've got a chance to stay in our camp, we provide accommodation, provide food, provide training," Kibett says. 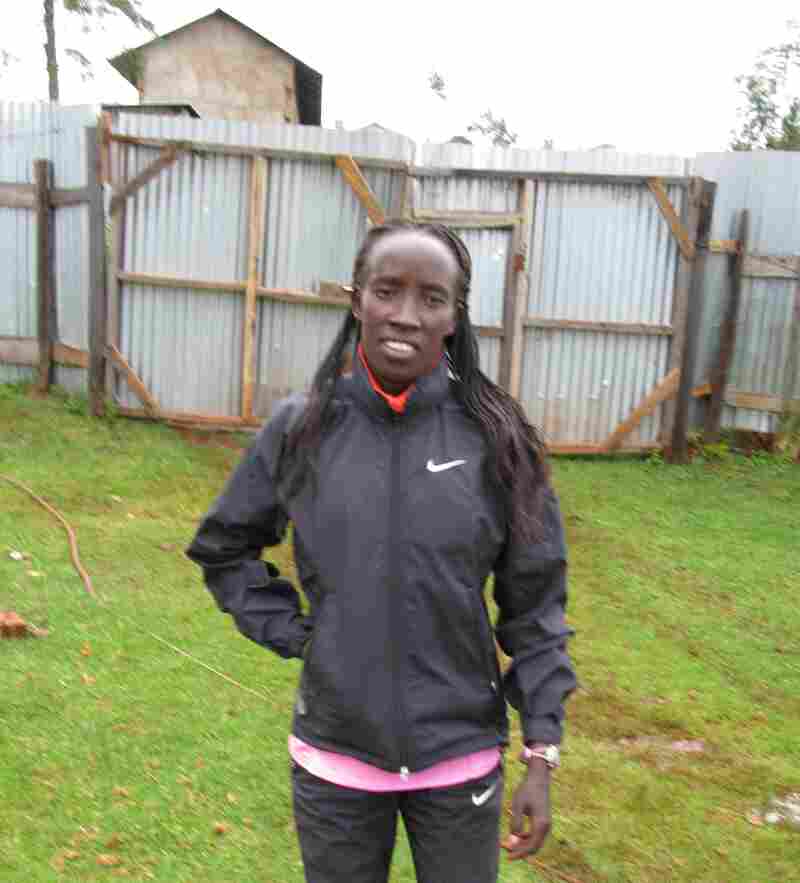 Hellen Kimutai grew up in a one-room hut and ran 6 kilometers each way — barefoot — back and forth to school. In March, she won the Rome City Marathon. John Burnett/NPR hide caption

It's pretty basic, but this is what every hungry, young Kenyan runner wants: sponsorship and a manager. Few are accepted at Run-Fast. The men must have a marathon time of at least 2 hours, 10 minutes.

A good example of a Kenya success story is Kibett's wife, Hellen Kimutai.

"I grow up in here a place called Simara," she says. The village is not far from Iten.

Kimutai is 35 years old with a broad forehead and braided hair. In March, she won the Rome City Marathon and the prize of 40,000 euros. The annual per capita income in Kenya is less than $2,000 a year.

Growing up in a one-room hut, she began her athletic career running back and forth to school — 6 kilometers, barefoot — when she was 15.