Accessibility links
Cars For Clunkers: Myanmar Swaps Old Rides For New Until recently, few people in Myanmar had cars because only the ruling elite could afford imported vehicles. But a new policy that lets ordinary Burmese buy imported cars, too, has rusting jalopies slowly disappearing from city streets. The car policy is emblematic of the country's rapid and chaotic reforms. 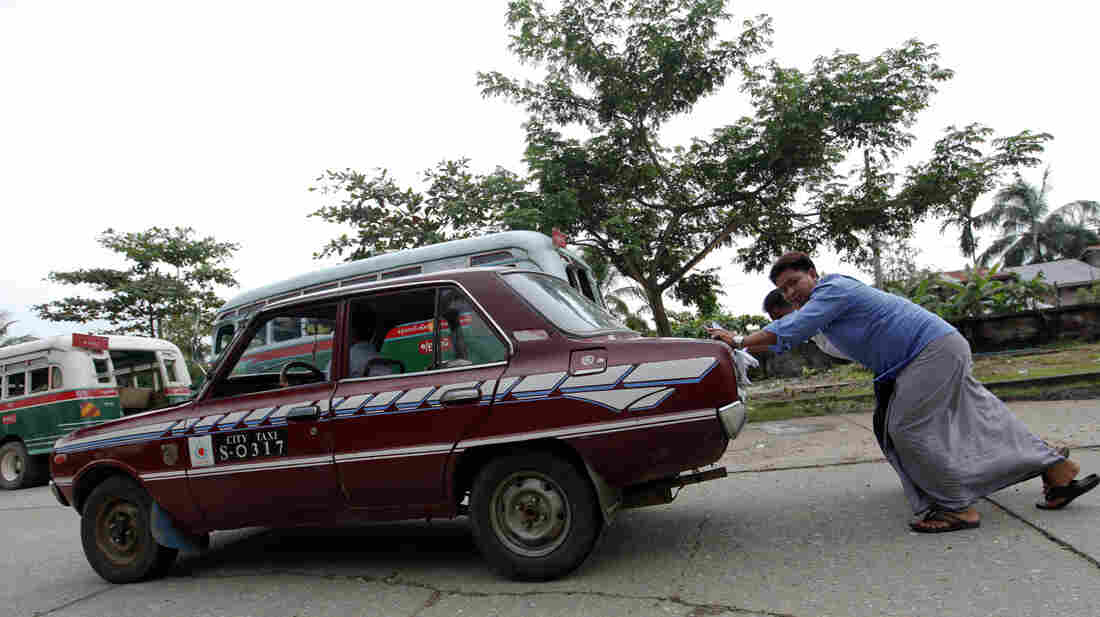 An old taxi is pushed toward a vehicle license office to be exchanged for an import permit in Yangon, Myanmar. As many Burmese citizens take cars as an investment, many imports are sold and resold with a higher markup. Soe Zeya Tun/Reuters/Landov hide caption 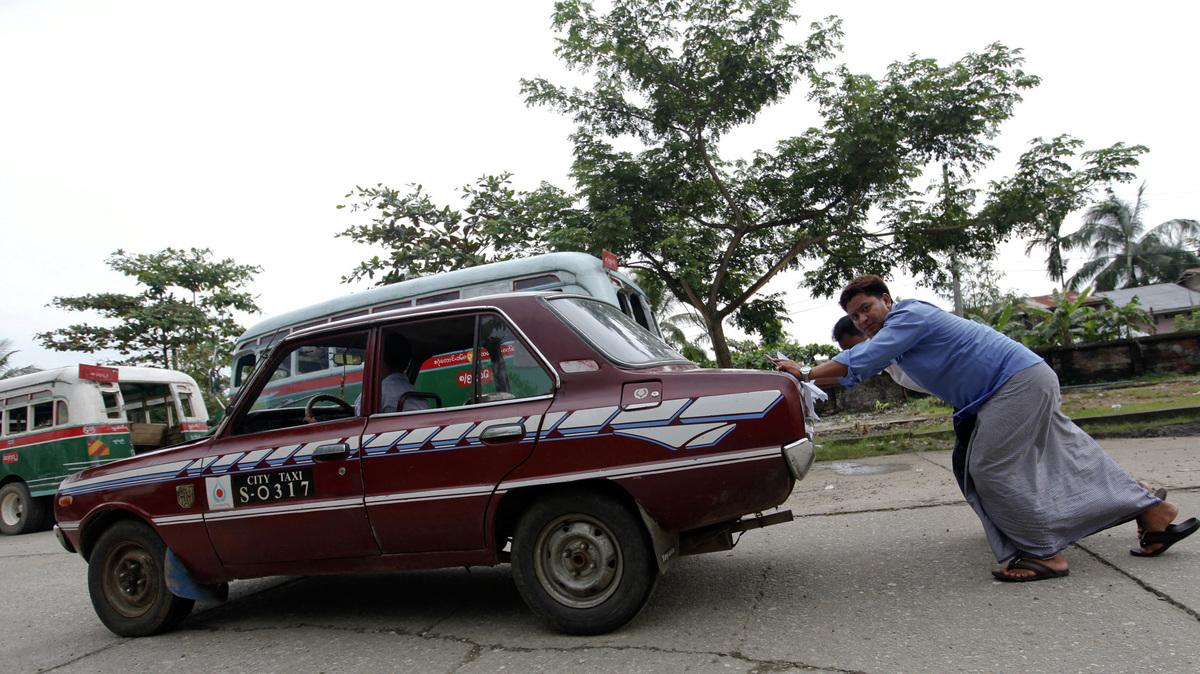 An old taxi is pushed toward a vehicle license office to be exchanged for an import permit in Yangon, Myanmar. As many Burmese citizens take cars as an investment, many imports are sold and resold with a higher markup.

Nowhere are the many recent reforms in Myanmar, also known as Burma, so evident as on city streets. Until this year, they were often choked with ancient jalopies because for most of the past half century ordinary Burmese citizens weren't allowed to purchase imported cars.

But the country's car import policies are now undergoing a lurching sort of liberalization, whose speed, quirks and unintended consequences offer a window on Myanmar's reforms.

One aspect of the reforms is visible at U Ohn Myint's car repair shop on the outskirts of Yangon, the country's main city. The 67-year-old mechanic takes the body of a 20-year-old government-made jeep and welds pieces of scrap metal onto the gaping rust holes. He and his young apprentices cobble in an engine from an old Mitsubishi SUV, the axles of a Toyota and some tires from South Korea.

U Ohn Myint offers this "Ride of Frankenstein" as evidence of his mechanical prowess. He boasts of having fixed all manner of rolling rust buckets, including some left over from the British colonial era.

"A 40-year-old car is nothing special here. I once refurbished a British Austin A40 that was more than 60 years old," he says proudly. "I had that thing up and running on the streets of Yangon."

New policies rolled out last September allow owners of cars between 20 and 40 years old to sell them for scrap. In exchange, they get licenses to import newer but still secondhand cars. 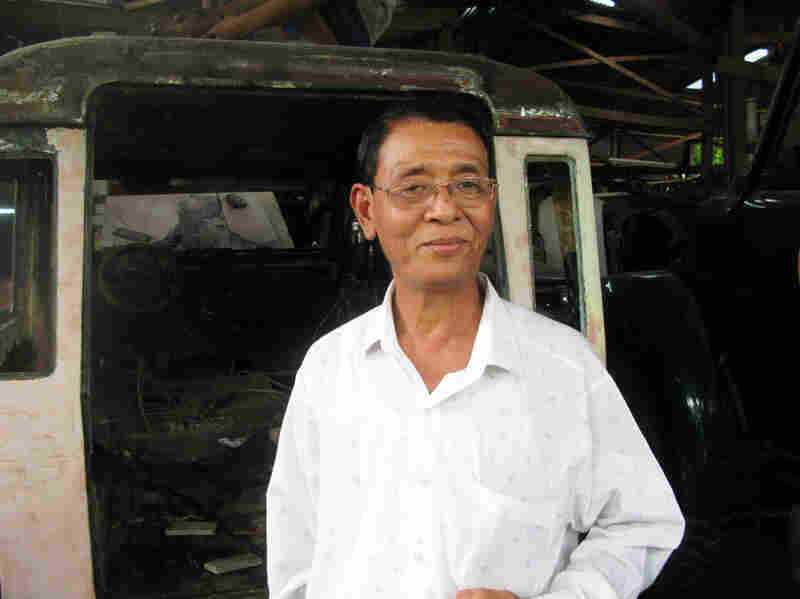 U Ohn Myint has serviced many decades-old jalopies and kept them roadworthy when ordinary Burmese could not import private cars. Anthony Kuhn/NPR hide caption 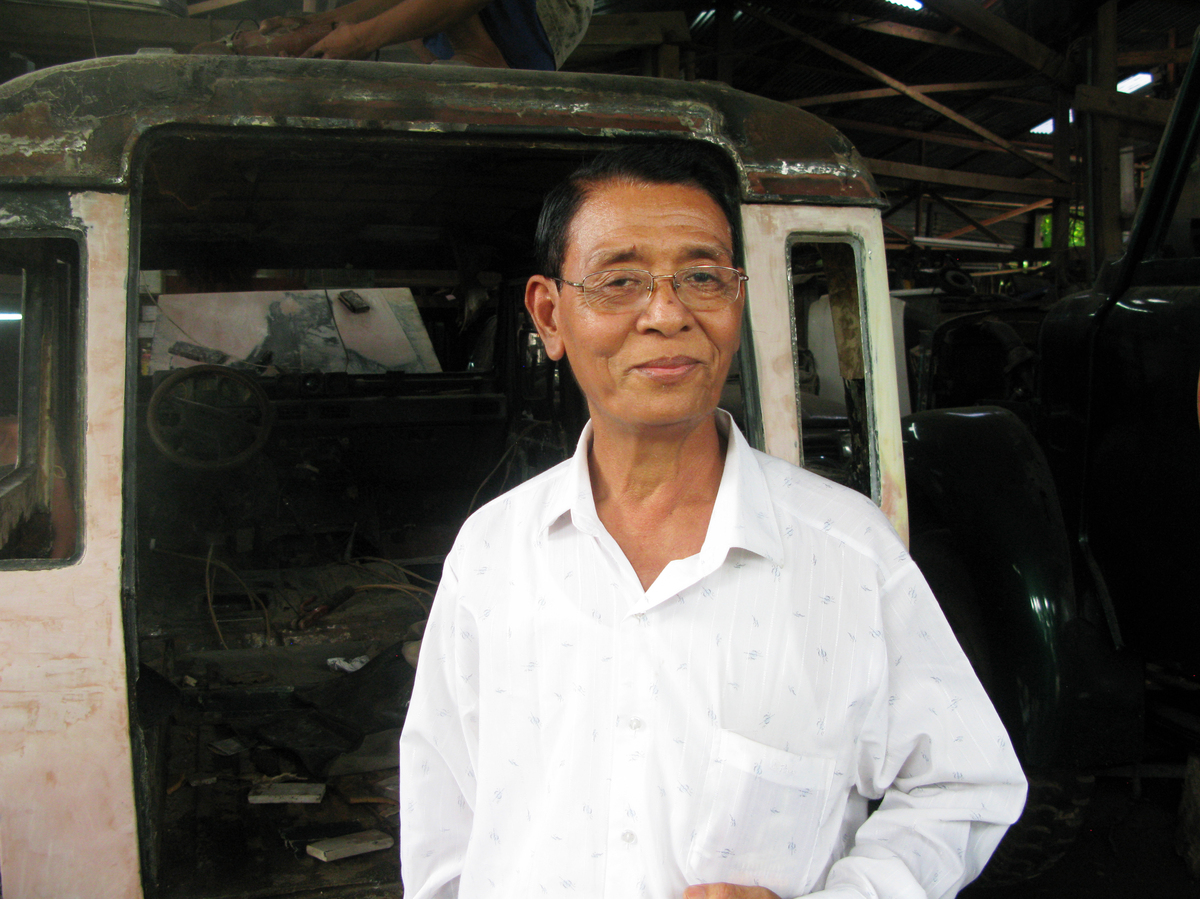 U Ohn Myint has serviced many decades-old jalopies and kept them roadworthy when ordinary Burmese could not import private cars.

Ohn Myint says this "junkers for clunkers" policy has had a serious impact on his business.

"As new imports flood into the country, car prices are going down," he explains. "Nobody wants to drive these old clunkers in the city anymore, so now we mostly sell them to customers in rural areas."

Most of the cars on the streets of Yangon are aged Japanese imports. A few wealthy Burmese import European cars, but the country lacks the parts and trained mechanics to maintain them.

This year the policy was revised once again, allowing consumers to import any new car they like. But they need to pay for it with foreign currency, and the customs duties, surcharges and registration fees amount to a 165 percent markup.

Tin Maung Maung Than, a senior research fellow at the Institute of Southeast Asian Studies in Singapore, says that these prices change the nature of the automobile in the minds of Burmese consumers.

"Everyone, because of policymaking in the past, regards cars not as utility, but as investment," he says. "So when you buy a car, you are thinking of selling it later, at a profit."

When the government liberalized the import policy, prices for the most imported cars in Myanmar dropped by around half.

"Now at the moment, there are some people and they have their car to sell in the market," he says. "So they invest a lot, and now they suddenly change the policy, and [the investors] have some losses."

A Toyota For Half A Million Dollars

Until the recent reforms, only officials were allowed to import automobiles. The government and military both have their own car-import companies. Many of the imported cars are then resold to family members and cronies of those in power.

Car trader Htay Aung has found success buying cars from the military and then reselling them to consumers. Of course he says this drives up the price.

"Seventy percent of the officials who get individual import permits will not use the cars themselves," he says, "but will instead resell them and pocket the profits. We will then buy those cars and resell them again, for a profit of around $6,000 to $11,000 each." 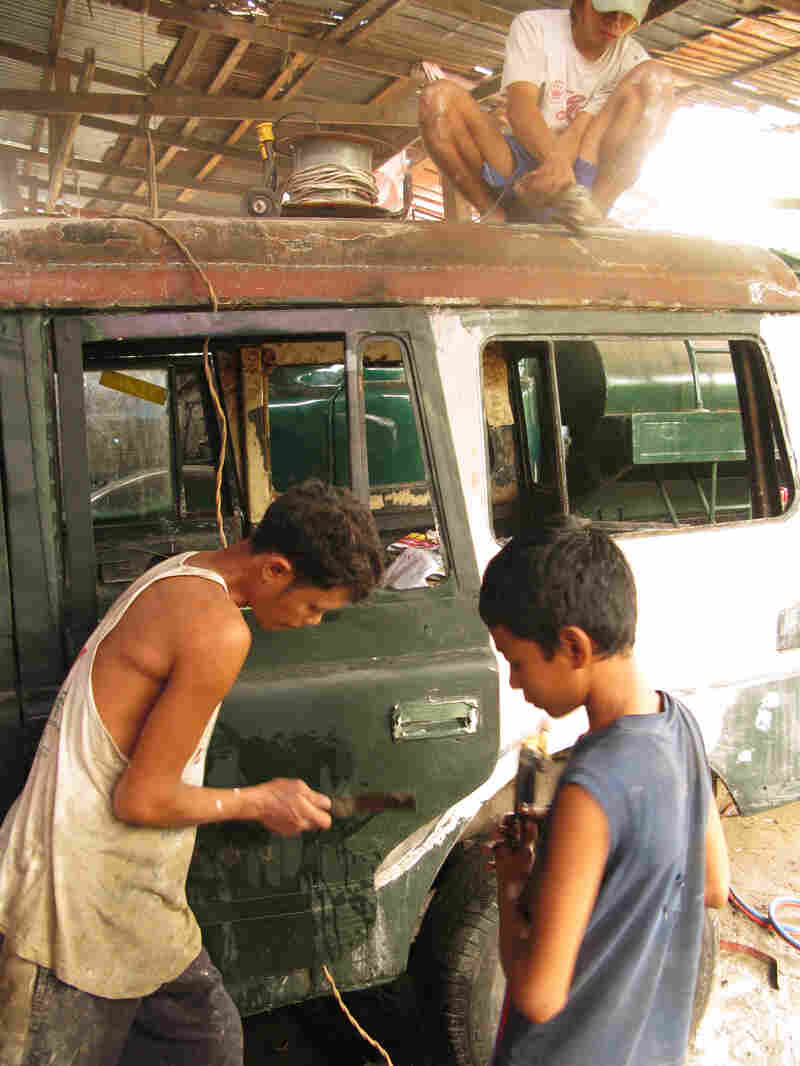 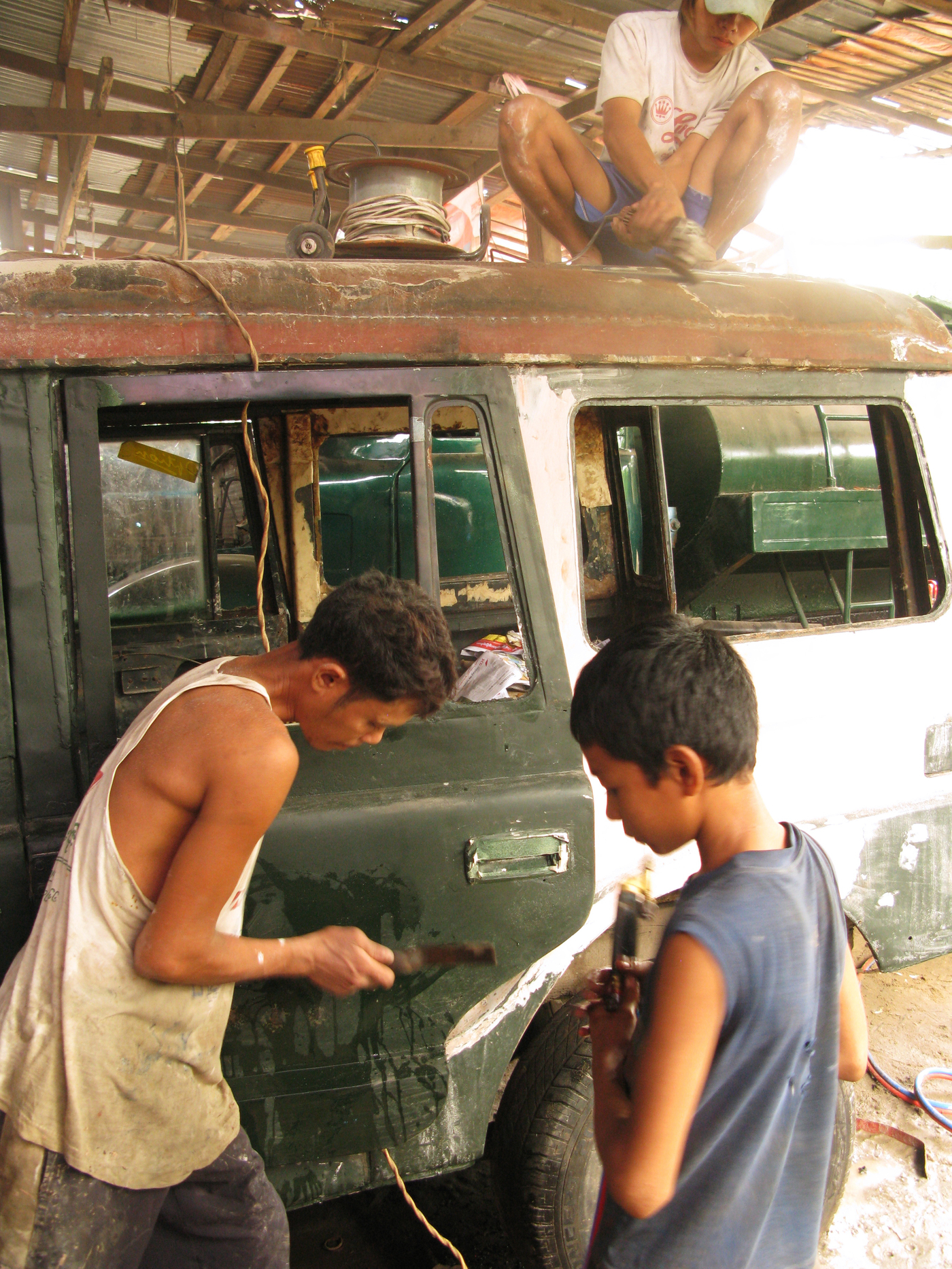 Htay Aung says all the selling and reselling can jack the price of an ordinary Toyota Land Cruiser up to around $500,000. To the average citizen in one of Asia's poorest countries, that is what you call a crony-mobile.

Scholar Tin Maung Maung Than says that under a well-coordinated policy reform, all the duties and fees collected from car buyers might be used to build public transportation and infrastructure. But, he notes, even if the policies are haphazard or irrational, the government can still claim them as an improvement and good for the common people.

"There is this driving force under the new government of liberalization," he says. "Everybody jumps on the liberalization wagon. So everything that relaxes policies and liberalizing seems to be taken as good, regardless of the consequences."

Still Few Cars On The Road

Back at his repair shop, Ohn Myint shows visitors a freshly painted and refurbished jeep, which he says will sell for the equivalent of about $4,000 or $5,000. He says he supports the new car policy, though it has put a dent in his business.

"These rebuilt old cars are not so safe," he says, "and they're still expensive for ordinary Burmese. With the new policy, people will get better prices for their car purchases. And the new cars will still need us to maintain them."

Even with all the new imports flooding in, only seven out of 1,000 Burmese own cars, compared to 270 per 1,000 people in neighboring Thailand. Car prices are likely to remain prohibitively high for ordinary citizens until foreign car makers set up shop in Myanmar.