Accessibility links
Samsung Fight Among Many In Apple's Patent War In a federal district court Monday, computing giant Apple will ask for more than $2.5 billion from rival phone maker Samsung for patent violations. If successful, the suit would be the most expensive patent violation in history. It's just one front in Apple's war against phones running Google's Android operating system. 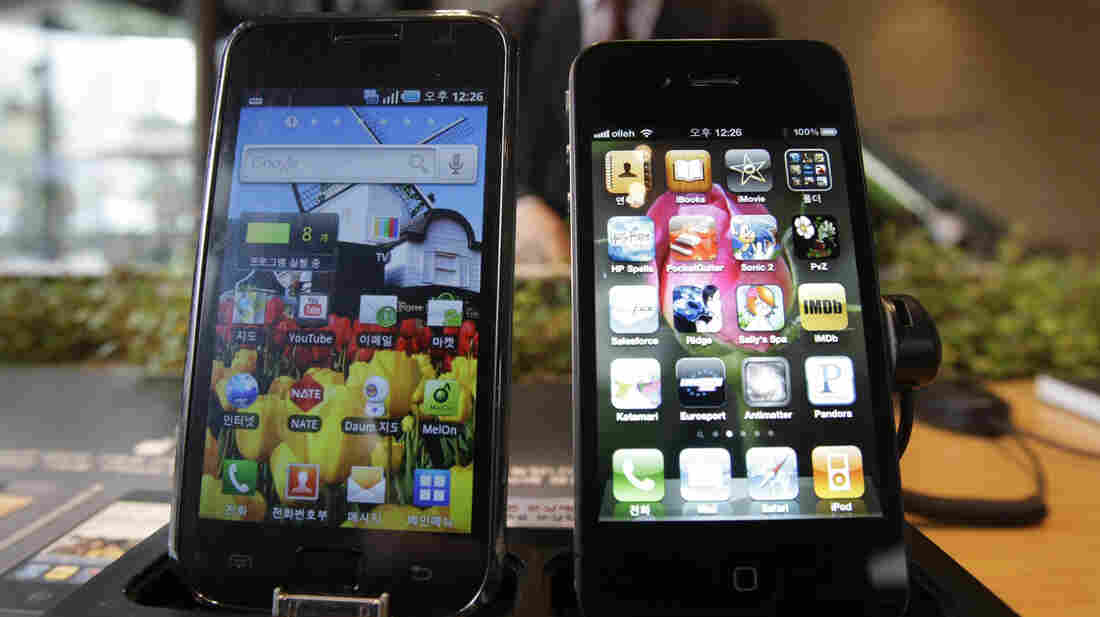 An epic battle between the two biggest smartphone makers begins Monday in a federal district court in San Jose, Calif., where computing giant Apple is asking for more than $2.5 billion from rival phone maker Samsung for patent violations.

The suit would be the most expensive patent violation in history, and it's just one front in Apple's war against phones running Google's Android operating system.

"This is officially World War III," says Carl Howe, an analyst with Yankee Group. "I think this is a case of whether the iPhone really, as Apple claims, changed the world in 2007."

How Unique Must A Design Be To Get A Patent?

To put that in perspective, think about the smartphone you had before that, Howe says. They were often boxy, and they had keyboards. When the iPhone came out, the commercials showed a hand interacting with the glowing, elegant screen. It had soft edges and a clear, glass face.

The iPhone was a big hit, and Howe says other smartphone makers, including Samsung, changed the way they designed their phones.

"After iPhone was introduced, suddenly all the designs looked like black slabs with touch interfaces, no keyboards and lots of icons," he says.

Imitation may be the sincerest form of flattery, but in the world of business, where style and design are part of what make a brand like Apple unique, imitation is seen more as a way to confuse customers. Howe says Apple patented designs for its iPhone and iPad tablet.

"They're things like a flat, clear surface on the front of the product, or a rectangular product with four evenly rounded corners," he says, "lots of things that just sound like, 'Oh, you can get a patent for that?' But they fundamentally determine what the device looks like."

Samsung and Apple would not comment for this story.

A recent court filing by Apple compared pictures of Samsung smartphones before the iPhone and after. Some of the early versions have keyboards or other buttons, and they have sharper corners.

Mark Lemley, a professor at Stanford Law School, says the patent office isn't always right when it grants patents. Take that rectangle with the round corners.

"That really is a patent of stunning breadth if you take seriously the idea, when you look at the diagram in the patent, that Apple gets to own a computer that's shaped like a rectangle," Lemley says. "Well, then designing around [that is] going to be awfully hard for Samsung or anybody else."

Other critics say that even if Apple did it all best, it wasn't even the first to get a patent on these designs. David Martin, the chairman of M-Cam, a company that evaluates the value of patents, says the difference between the emotional response that says these technologies look alike and the actual construction of the patent law are two different things.

"That line has been entirely blurred," Martin says.

Emotional response might be Apple's most effective weapon, especially in this case. Apple did change the way people use and think about smartphones, and it opened up a new market for tablet computers. Analyst Carl Howe says Apple might be able to make a sympathetic case to jurors.

"One of the things Apple is good at [is] they're really good at presenting information in very influencing ways," Howe says. "So I would actually give them an edge simply because they're probably going to be able to make their case in a way that a jury will understand."

This is just one of many cases in the U.S. and around the world where Apple is pursuing Samsung and other rivals such as HTC. In all of them, the other companies pull out a few patents of their own and sue Apple right back.

Lemley, the Stanford professor, thinks it's a sign that something is wrong with the patent system, which is meant to promote innovation.

"They've probably spent $700 million in legal fees, and at the end of the day everybody's got enough patents that they could all interfere with each other making products," he says. "That's not the way we want innovation to work."

For consumers, this might bring higher prices and fewer choices. In fact, in Europe, a judge banned Samsung's Galaxy Tab 7.7 tablet from stores. For Apple, which recently saw sales of its iPhone slow, this could be a battle worth fighting.