Accessibility links
Romney Goes After Obama On Alleged Leaking Of Secrets The Obama administration has initiated more prosecutions against leakers than all previous administrations combined. But Mitt Romney is focusing on what he alleges is the administration's record of leaking classified information for political purposes. Republicans cite the details of the raid that killed Osama bin Laden as one example. 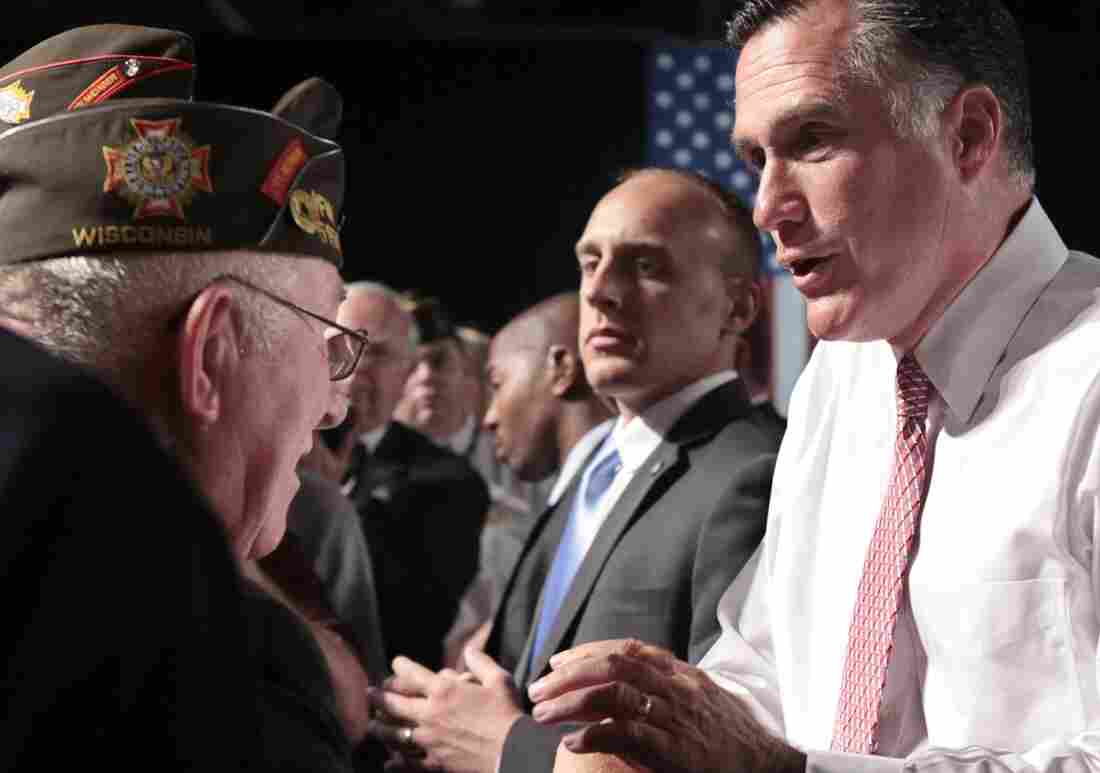 Republican presidential candidate Mitt Romney meets with members of the Veterans of Foreign Wars after his speech at the VFW National Convention in Reno, Nev., on July 24. Rich Pedroncelli/AP hide caption 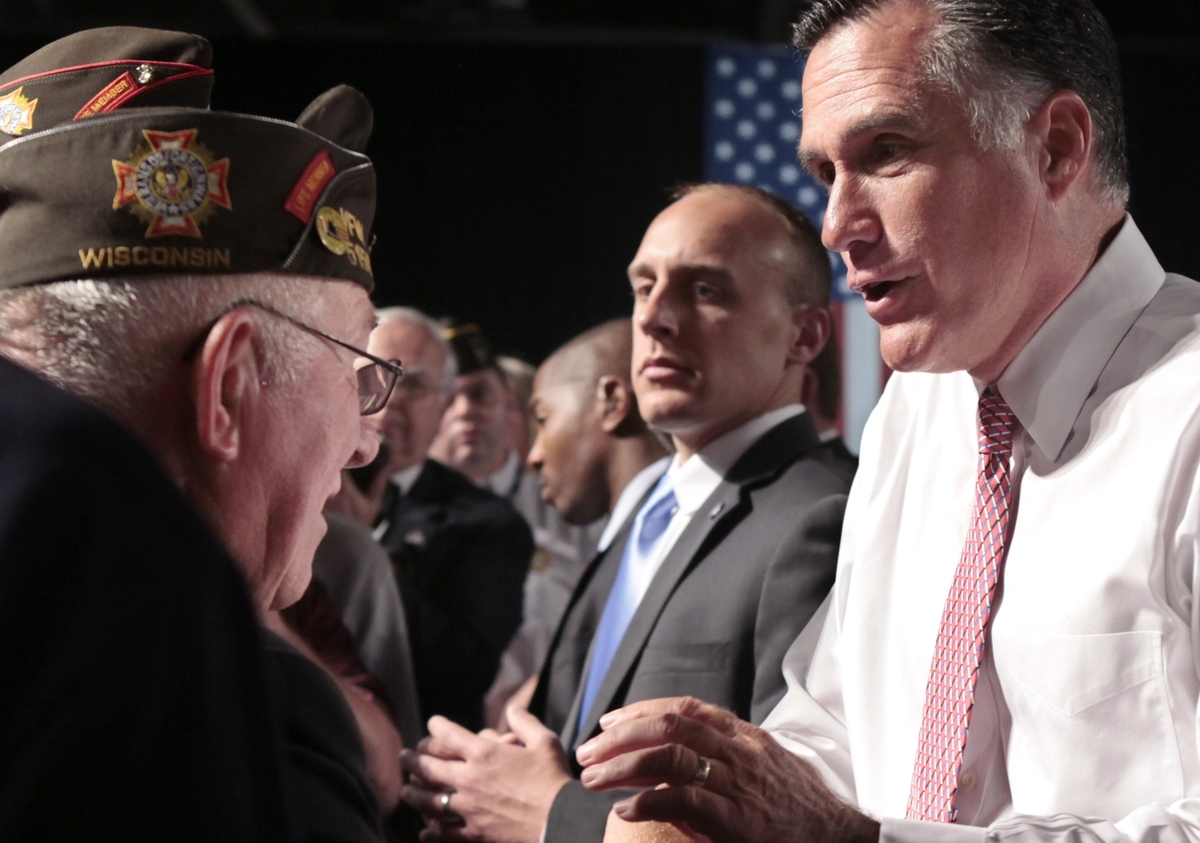 Republican presidential candidate Mitt Romney meets with members of the Veterans of Foreign Wars after his speech at the VFW National Convention in Reno, Nev., on July 24.

The latest national security issue to figure in the presidential campaign has little to do with Iran, Afghanistan or other foreign policy challenges. Mitt Romney is instead focusing on what he and other Republicans allege is the Obama administration's record of leaking classified information for political purposes.

"This conduct is contemptible," Romney, the GOP presidential candidate, said in a speech last week before the Veterans of Foreign Wars. "It compromises our men and women in the field. Whoever provided classified information to the media, seeking political advantage for the administration, must be exposed, dismissed and punished."

The notion that my White House would purposely release classified national security information is offensive. It's wrong.

In fact, the Obama administration has been aggressive in going after leakers, initiating more prosecutions than all previous administrations combined. But Republican critics allege that the anti-leaking efforts have been selective, with the administration pursuing whistle-blowers, but permitting leaks that make President Obama look strong.

In his VFW speech, Romney pointed to the administration's release of what he said were "secret operational details" of the raid against al-Qaida leader Osama bin Laden last year in Abbottabad, Pakistan.

In the following days, administration officials revealed that the raid was carried out by a Navy SEAL team. They explained in general terms how they came to believe bin Laden had taken refuge in the compound where he was found, and they confirmed that the helicopters used in the raid employed stealth technology.

In deciding what to say about the bin Laden raid, administration officials said it was "an important opportunity" to advance U.S. strategic interests, perhaps by diminishing bin Laden's stature in the Muslim world. But Pentagon officials were uncomfortable with the level of detail provided.

Ammunition On The Trail

The uproar over the administration's public discussion of the bin Laden raid has provided campaign fodder. Romney cited Gates in his VFW speech last week, and Republican members of Congress want to know whether the White House gave classified information to Hollywood director Kathryn Bigelow, who is making a movie on the bin Laden raid.

In addition, at least two retired SEAL commanders have launched political action committees dedicated to Obama's defeat, both of them citing the administration's alleged leaking of security secrets.

Ryan Zinke, a former commander of the Navy's elite SEAL Team 6, says he and his SEAL colleagues were angered that the administration identified SEAL Team 6 as the unit responsible for killing bin Laden.

"When you disclose the specific team, what it does is, it puts that team, the dependents, and the military members at home and abroad, at risk," Zinke said in an interview on the Fox News program Lou Dobbs Tonight.

"That's what we have to stop," Zinke said.

His committee, Special Operations for America, sponsored a car in this week's NASCAR Sprint Cup race in Indianapolis and is seeking donations to support an anti-Obama ad campaign.

Criticism of the administration's handling of the bin Laden raid, however, has been somewhat undercut by comments by the raid's commander, Adm. William McRaven, now serving as chief of the U.S. Special Operations Command.

At a news conference in May, McRaven said there was "nothing frankly overly sensitive about the raid. ... From a military viewpoint, it was a standard raid and not really very sexy."

McRaven even wished Bigelow "good luck" with her film.

Some SEALs themselves, meanwhile, apparently have no objection to being publicly identified. Several active-duty SEALs openly took part in this year's Act of Valor action film, which depicts a typical SEAL helicopter raid.

Whether an orchestrated SEAL campaign to defeat Obama will have an impact remains to be seen. Presumably, the Romney team hopes so. But former Navy SEAL Eric Greitens, who's written a memoir about his military experience, is uncomfortable with the idea of SEALs organizing for a particular political purpose.

"I actually think it's very important that the Navy SEAL community stay out of politics," Greitens says. "It's very important for us as a group of Navy SEALs, to make sure that the message that we send to the country is that we're ready to serve any commander in chief, the elected head of the armed forces, that the people of the United States elect. That is our mission, that's our duty, as Navy SEALs."

Administration critics, however, say the revelations about the bin Laden raid are just part of a larger pattern of national security leaks.

There are at least three other examples, all occurring in the past few months. Reporters learned about an al-Qaida double agent. Sources also described how the U.S. decides which al-Qaida figures should be killed and which should be captured. And some unidentified officials confirmed that the so-called Stuxnet cyberweapon, used against Iran, was a U.S.-Israeli creation.

Such information can have consequences.

Jason Healey, director of the Cyber Statecraft Initiative at the Atlantic Council, says now that the whole world knows the United States is using offensive cyberweapons, the U.S. is likely to be blamed if a cyberwar ever breaks out.

But in more recent statements, White House officials have qualified that statement a bit, saying only that the president himself has not divulged secrets nor authorized anyone else to leak classified information.

That seemed to leave open the possibility that someone in the administration, acting independently, may have revealed secrets, and an off-the-cuff comment last week from Sen. Dianne Feinstein, D-Calif., did not help.

Feinstein, who chairs the Senate Intelligence Committee, later said she regretted having "speculated" about the leaks, but the damage was done.

Of course, this is not the first time an administration has been suspected of leaking classified information. In four books about President George W. Bush's war and counterterrorism policies, journalist Bob Woodward had access to many senior officials and divulged many secrets.

This is an election year, however, and in the absence of higher-profile security issues, the controversy over the Obama team's alleged leaks is certain to linger.