Accessibility links
Jaime Hernandez Bridges The Indie-Vs.-Cape Divide God and Science: Return of the Ti-Girls collects and expands the adventures of a supporting character from the Hernandez brothers' long-running comic book series Love and Rockets. NPR's Glen Weldon says it will confound superhero haters with its marriage of depth and goofy hero tropes. 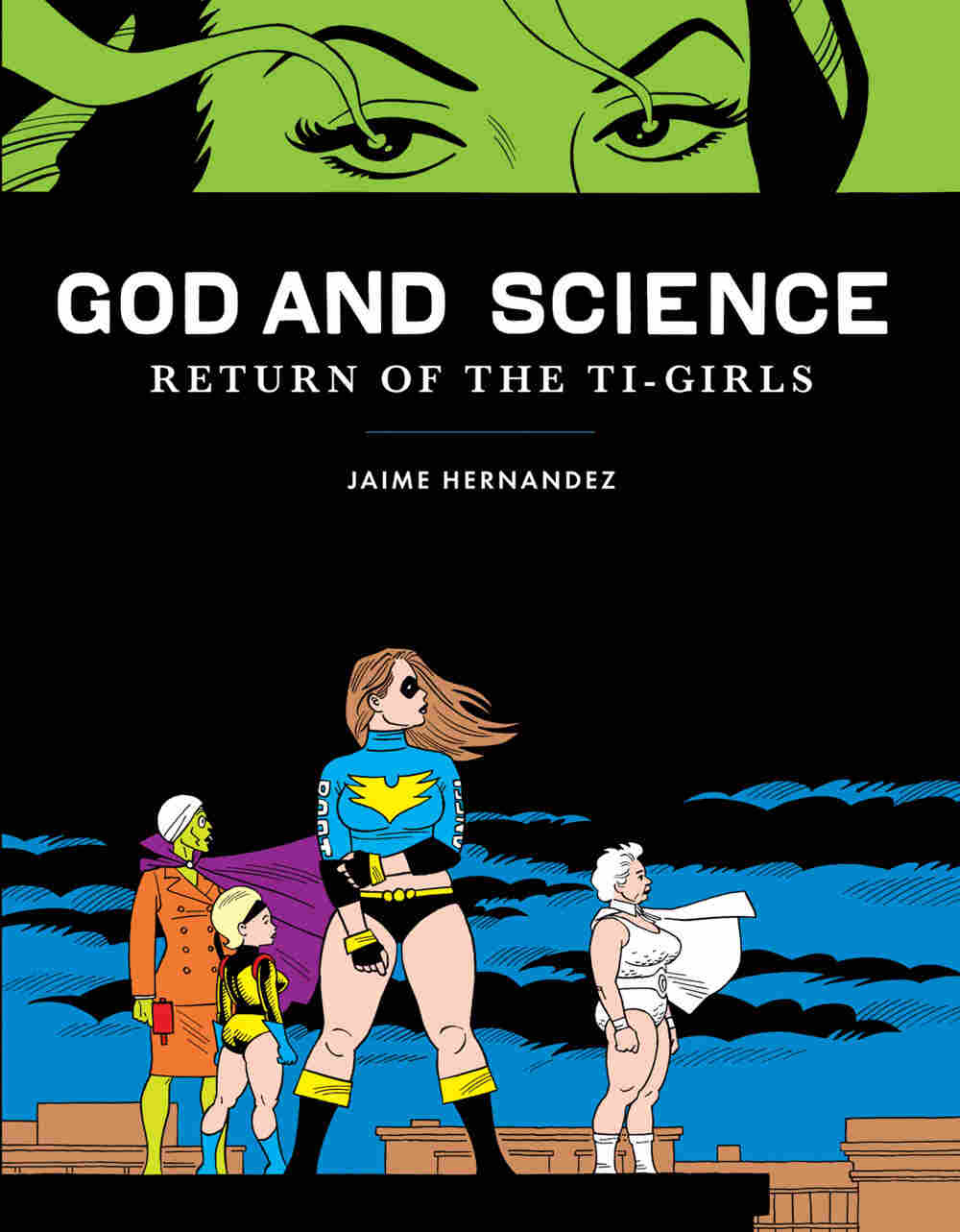 If only Nixon could go to China, only indie-comics master Jaime Hernandez could produce God and Science: Return of the Ti-Girls, the brightest, purest, most quintessentially superheroic superhero yarn in years.

The exploits of garishly clad do-gooding mesomorphs have dominated American comics for three-fourths of a century. This fact breeds contempt among many who know that the medium of comics can be used to tell a much wider variety of stories, be they bolder and weirder (like Kevin Huizenga's hilarious new Gloriana) or quieter and more personal (such as Natalie Nourigat's recent, charming autobiographical comic Between Gears).

Many devotees of what are sometimes dubbed indie comics (or, God help us all, "art-comix") evince a disdain toward the capes-and-cowls set; this deeply entrenched dismissiveness, in turn, only serves to make those who love superheroes defensive and resentful. And so the battle lines deepen and, in comics shops, message boards and blogs, the war rages on.

Too often overlooked amid this roiling stew of mutual fannish antipathy is the simple fact that good comics are good comics. Case in point: God and Science, a book that gleefully grafts a gee-whiz superhuman sensibility onto a set of nuanced, all-too-human relationships. Within its breezily charming pages, the pointless battle between capes-lovers and capes-haters subsides: detente at last.

Artist and writer Jaime Hernandez is, along with brother Gilbert (and, infrequently, brother Mario), the co-creator of Love and Rockets, the expansive, emotionally rich and achingly felt comics series celebrating its 30th anniversary this year. When the series began, Gilbert focused on tales set in the Marquez-inflected Latin-American village of Palomar, while Jaime's stories revolved around Maggie and Hopey, two members of an all-girl punk group in California, and the ever-expanding cast of characters that surround them. Over the years, we've watched romances blossom and wither, plots gleefully twist and retwist, characters grow wiser (and older) and the brothers' unself-conscious mastery of the comic form deepen. 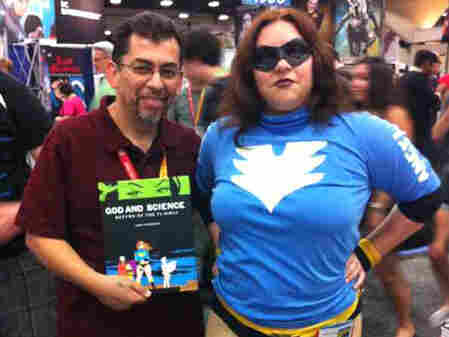 Love and Rockets author Jaime Hernandez, with a fan dressed as Boot Angel, one of the characters in God and Science. Courtesy of Fantagraphics hide caption

In recent years, Jaime's stories have turned away from the high adventure of early Maggie and Hopey tales and grown more subdued, and his characters — Maggie in particular — steadily more grounded, even sober.

But in God and Science: Return of the Ti-Girls (which reprints material serialized in Love and Rockets: New Stories and adds a new ending), we learn that Maggie's new roommate is secretly the superhero Boot Angel, who longs to join one of several all-female superhero teams that have always functioned at the periphery of the series' narrative universe. What follows is only tangentially connected to Maggie's workaday world — a nonstop whimsical whirlwind of superheroic feats, bloodless battles and a huge, varied, entirely female cast of characters.

"Varied" being the keyword. As he has for three decades, Jaime peoples God and Science (named for one old-school superteam's battle cry) with women of all sizes, shapes and ages — and depicts them all with a sexiness that seems bracingly matter-of-fact. In many a Marvel and DC comic, women with bodies that defy all laws of anatomy and physics are drawn lasciviously even in repose; Hernandez's characters instead radiate a clear-eyed, self-possessed, don't screw-with-me confidence.

Read An Excerpt: 'God And Science'

Fans of Love and Rockets who disdain superhero stories as puerile pap will attempt to read God and Science as a withering satire of the genre, but the book will resolutely confound them. These pages exude a deep and abiding affection for even — especially — the hokiest of superhero tropes.

Fans of superheroes who roll their eyes at the preciousness of indie comics, on the other hand, will find that Hernandez's ability to establish a rounded, utterly believable friendship in the span of a few panels only enriches a character's most outlandish exploits. Without decades of pre-existing continuity hemming him in, Hernandez is free to let his imagination run riot — and creates, through dialogue, body language and characterizing detail, what feels like a living, fully formed universe of superwomen whose network of relationships has weathered many years of shared history.

So let the pro- and anti-cape factions continue to wage their meaningless war. But let God and Science stand as a happy synthesis of the two, a reminder to the rest of us who look to the comics medium for good stories told well.