Accessibility links
Families Make Big Changes To Pay For College More students are reconsidering their decisions to attend costly out-of-state schools or choosing to enroll in more affordable community colleges, a new study shows. Even as they foot most of the bill and are co-signing loans, some parents are still paying off their own student loans. 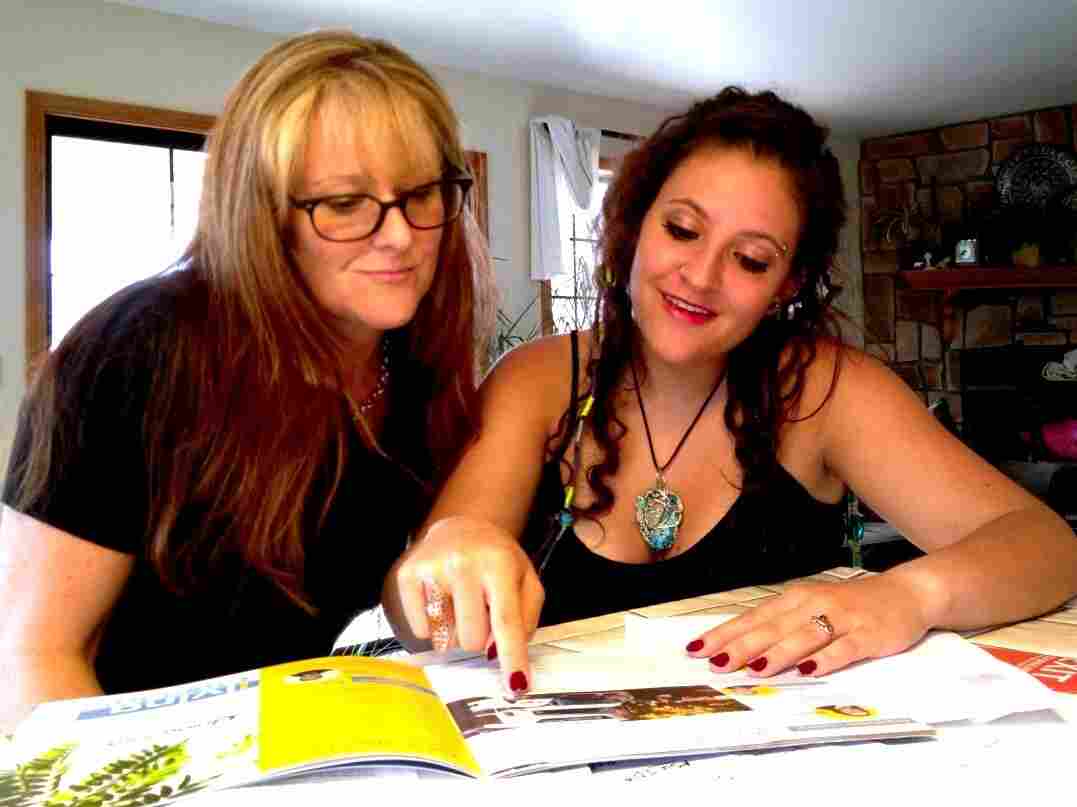 Emily Macri looks over a college brochure with her mother, Maureen O'Brien, in Kingman, Ariz. Macri is transferring to Northern Arizona University so that she can pay in-state tuition. Courtesy of Emily Macri hide caption 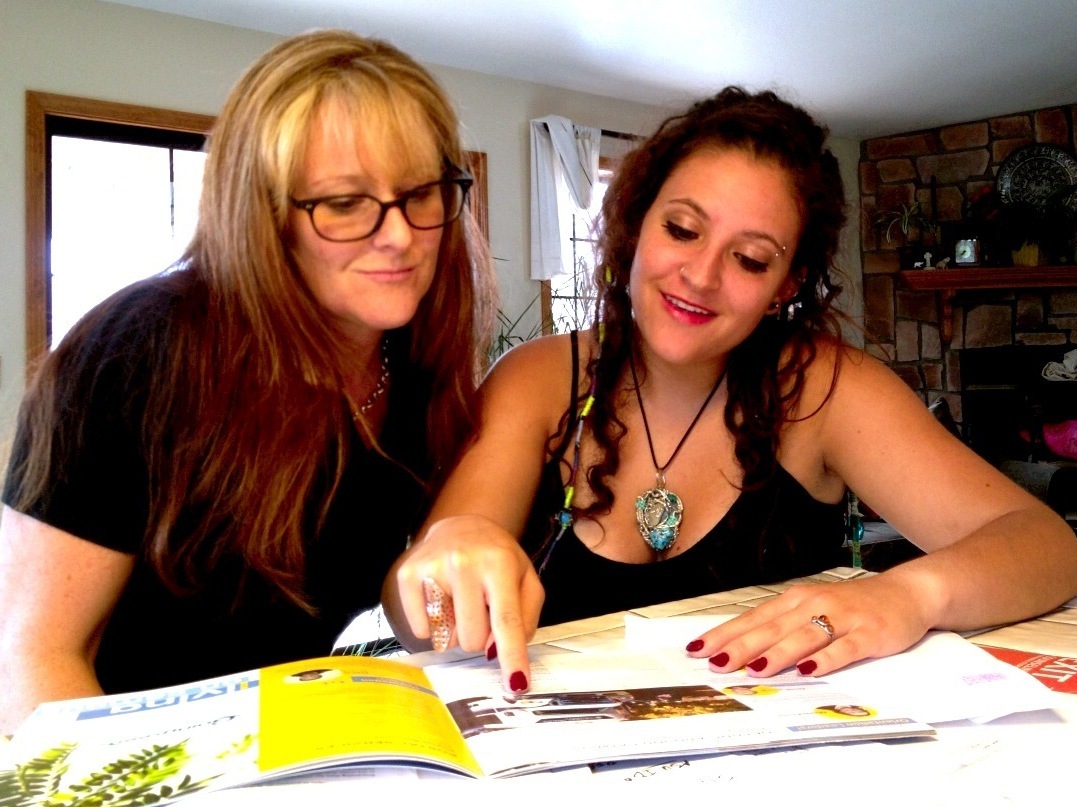 Emily Macri looks over a college brochure with her mother, Maureen O'Brien, in Kingman, Ariz. Macri is transferring to Northern Arizona University so that she can pay in-state tuition.

She could pick any college she wanted and they would figure out a way to pay for it.

Macri chose the University of Vermont, which costs more than $49,000 in tuition and fees per year for out-of-state residents.

O'Brien and her daughter co-signed a private student loan from Sallie Mae for $24,000 and a $30,000 Parent PLUS loan, a federal loan program for parents. And that was just for Macri's first two years of college.

"That was one of the compelling reasons why I asked her to consider coming to a state school here in Arizona," O'Brien says. "I just couldn't keep doing that. And with my son going to college, too, I can't do that for two kids."

How The Average American Family Pays For College

Telephone interviews about how families paid for college in academic year 2011-12 were conducted with 801 undergraduate college students, ages 18 to 24, and 800 parents of undergraduates.

A recent study by the research group Ipsos and the student loan giant, Sallie Mae, shows that approximately 70 percent of families are eliminating college choices based on cost. More students are also now choosing to enroll in community colleges, which is often the most affordable option.

This fall, Emily will be a transfer student at Northern Arizona University, which costs only about a third of the cost of the University of Vermont.

Her younger brother, Casey, will be starting as a freshman at Arizona State University, which costs about the same as Northern Arizona.

The family is expecting to borrow an additional $70,000 to pay for Emily's last two years of college and Casey's next four.

Emily says leaving the East Coast and having to transfer is tough.

"I loved it and it is a shame that I can't go back again in the fall," she says. "But then again, I have to look on the bright side of things, I'll be saving a lot of money."

She tried to offset college expenses by working part time. And this summer, she's working as a cashier at a frozen yogurt shop.

She says she's determined to finish her degree in environmental studies.

I can't afford to go to college, but I'm taking out loans, I'm putting my foot forward and making sure I get an education so that I can get a really good job in the long run.

"I can't afford to go to college, but I'm taking out loans, I'm putting my foot forward and making sure I get an education so that I can get a really good job in the long run," Emily says.

In 2004, after her job at a technology company was outsourced to India, she decided to go back to school. She enrolled in a physician's assistant program at the Rochester Institute of Technology where she had to take out more than $60,000 in loans.

But her salary as a physician's assistant in upstate New York wasn't enough for her to make the monthly loan payments. Her home was facing foreclosure — so she sold it and moved out to Kingman, Ariz., with her son.

She was hoping to enroll in a loan forgiveness program by moving to an underserved region of the country, but she later found out that she was disqualified because she is working as a specialist in urology.

More On Paying For College

She is paid well now with a salary of $93,000 a year. Still, more than a third of her take-home pay goes toward paying off student loans.

"There's a feeling of satisfaction you get when you help people medically that you didn't get when you're working at a help desk or working at a cubicle," O'Brien says. "But at the same time, I think I've maybe mortgaged my future in ways that I couldn't have imagined when I went back to school."

She has no savings, no money put away for retirement and is thinking of taking on a second job to pay off her kids' loans.

And she even has a little bit to pay off in student loans from her first degree — from 1996.

Despite her family's growing student loan debt, O'Brien still believes in the value of a college education. She says it was her first degree — in French and international studies — that taught her how to think critically. And she wants the same for her kids.

The Promise Of College

Steven Maack, an English teacher at East High in Wichita, Kan., says he feels the same way. He and his wife make $110,000 a year. Ever since their daughter, Eden Maack, was born, they've been saving for college with help from grandparents. They've saved $16,000 so far — but that will soon disappear.

"In order to get her through the first year, we'll have to spend all the money we've saved," Steven Maack says. "It's conceivable for years two, three or four we'll have to borrow quite a significant amount."

Eden will be starting as a freshman at her first-choice school, Beloit College, in Wisconsin in a few weeks. It's also the school that offered her the best financial aid.

Beloit costs about $46,000 per year for both in-state and out-of-state students. Eden earned a $20,000 presidential scholarship and grants from the school, which will cover about half the cost each year, but her family will still have to take out more than $5,000 in loans to pay for her first year of college.

And once her parents' savings are spent on funding her freshman year, they'll have to think about how to fund her next three years of college.

For the Maacks, it's a family affair. Steven Maack says his parents paid for his undergraduate education many decades ago under the condition that he would one day pay for his children's. Eden will also try to take on a campus job to help with costs, but her main job is to finish school.

"It's my responsibility to finish college and make their burden worthwhile," Eden says.

Eden also has a sister just two years behind her and says that if she ever has kids, she knows her obligation is to one day pay for their college educations.