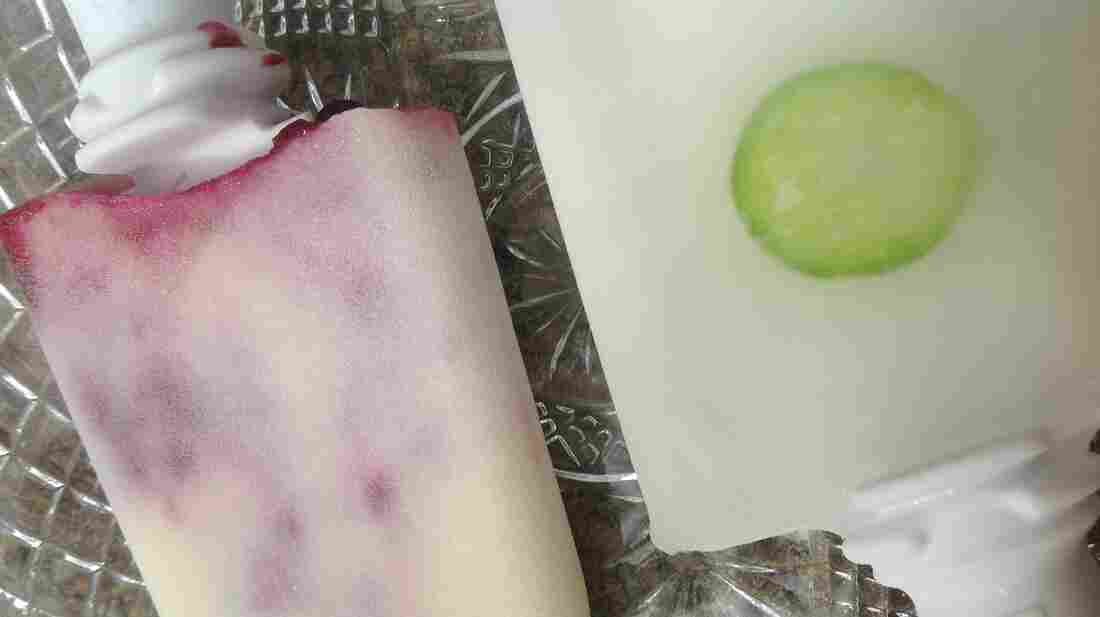 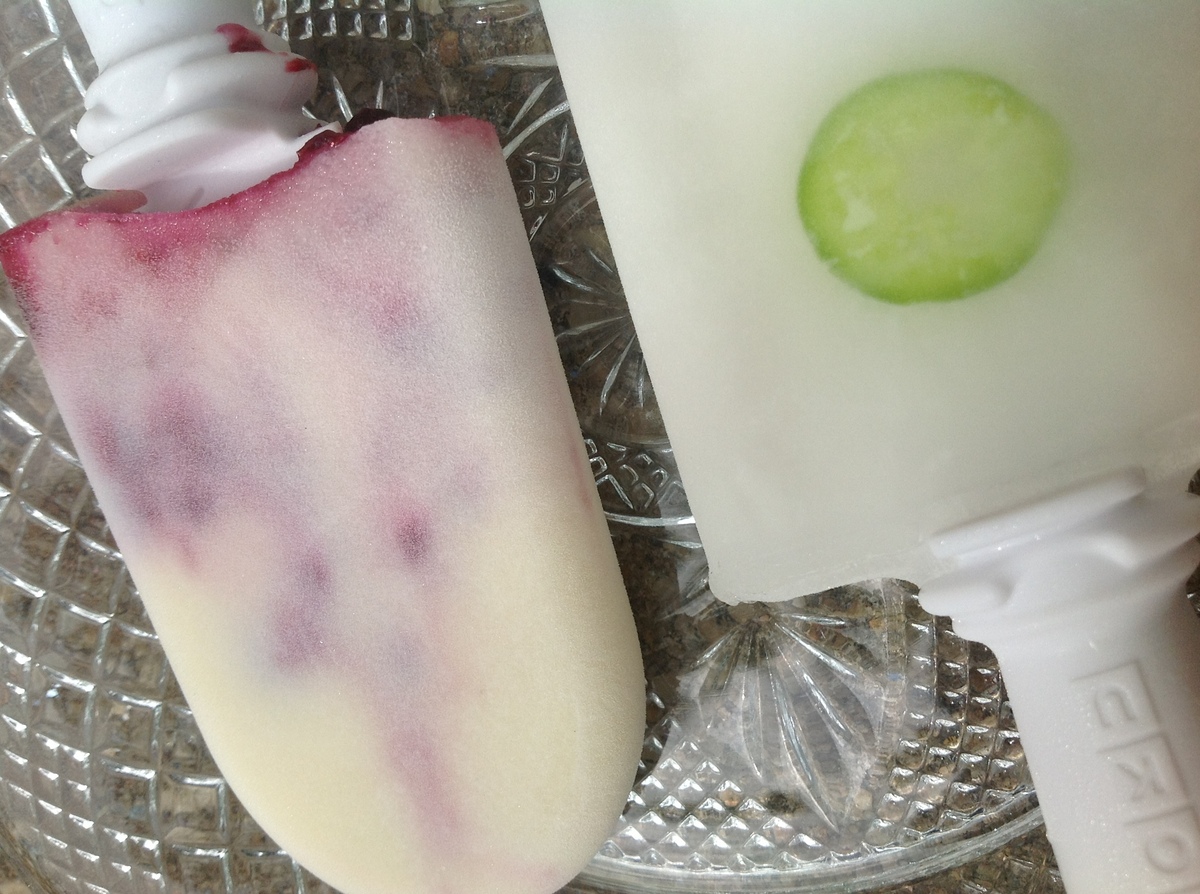 My mother was never one for spending money on food that other '80s kids took for granted. Canned ravioli, boxed macaroni and cheese, animal crackers and white bread were the kinds of things my kid palate craved to the point of obsession, forbidden fruits to be enjoyed only at friends' houses.

And while other mothers were stirring up alluring, fluorescent pitchers of Kool-Aid, my mom wouldn't dream of it. She was the queen of the frozen fruit-juice concentrates.

Of course, anyone can pour juice into a mold and be done with it, but I've found some recipes that may challenge everything you've thought about ice pops and inspire you to think of your own out-there flavor combos.

Grown-up me, however, is grateful for those sensible food choices — sometimes driven by frugality, sometimes common sense — even if little-kid me was less than appreciative.

Not surprisingly, Mom had equally stringent rules on ice pops — the ubiquitous summer treat said to be invented in 1905 by 11-year-old Frank Epperson, who later named his creation Popsicle.

The earliest ice pops I can remember, besides the Fla-Vor-Ices we bought with our own money or the Popsicles we got at birthday parties, were generally made from those concentrated fruit juices. Mom would pour them into ice-cube trays — likely an idea we got from the lumpy cartoon character who would sing about healthy snacks during Saturday-morning cartoons — and we would wait in anticipation for the grape or orange cubes to harden.

We occasionally got even more low-rent by pouring Pepsi into a Dixie cup, popping a spoon in and freezing the whole mess. It tasted fantastic.

In an age when tony pastry chefs are serving desserts that mimic our favorite childhood guilty pleasures — think upscale Hostess cupcakes and Snickers bars, not to mention the cupcake and whoopie pie mega-trends — it wasn't long before someone realized what the country really needs are upscale ice pops.

The trend was also likely inspired by our increasing fascination with Mexican culinary traditions.

"I do not take credit at all for coming up with the idea," says pop shop owner Michelle Weaver, who opened Meltdown in New Orleans in 2009. "I was inspired by the Mexican paletas. I was living in L.A. when I started playing around with this idea, and the Mexican population is huge out there."

Rina Rapuano is a freelance food writer and restaurant reviewer based in Washington, D.C. She writes regularly for The Food Network's CityEats site and Capitol File magazine, and has written extensively for The Washington Post's Food section and Washingtonian magazine. When she's not dragging her husband and two kids to area restaurants, she's usually in the kitchen cooking, baking or sneaking a cookie. Find Rapuano on Twitter at @rinarap.

She says paletas are traditionally full of artificial flavors and corn syrup, but the American ice pop trend seems to skew toward using all-natural ingredients and pushing the envelope with flavors. Some concepts, such as using corn, cucumber and chilies, are common in south-of-the-border pops, despite perhaps sounding strange to Americans.

But Weaver says people are coming around to her chef-like flavor combinations of cucumber chipotle, chocolate coconut curry and, her favorite, pineapple cilantro. (Although she admits the best-seller in her shop is the more accessible salted caramel.)

"People now are familiar with it," she says. "When I initially started, people had no idea why on earth I would do something like this [or] what it was."

A few years ago, I road tested a Zoku Quick Pop Maker for a magazine and was pleasantly surprised. More than just another kitchen space-sucker, it turned out the Zoku has many things going for it. For one, it's pretty easy to replicate the seemingly complicated recipes in the cookbook, like the whimsical watermelon pops I made, and you don't need all the equipment they try to sell you. For instance, the recipe book is sold separately, but there are plenty of free recipes on Zoku's blog. And chopsticks are a good replacement for the tool they make to stick things to the side of the mold.

Also, the quick freeze time keeps ingredients from separating and makes for a better texture with fewer ice crystals, mimicking the quick-freeze molds most pop-shop owners use.

Beyond the gadgets, you know a food trend has hit a fever pitch when someone figures out how to make it into a cocktail. A few years back, an Alexandria, Va., restaurant called Rustico was on the front end of this trend, making what it called "brew pops" in beer-spiked flavors such as chocolate stout. This year, a Texas company started making alcoholic pops it calls SocialIce, in flavors of mimosa-orange and sangria-grape. Plus, many online recipe sites are coming up with new ways of freezing alcohol.

Of course, anyone can pour juice into a mold and be done with it, but I've found some recipes that may challenge everything you've thought about ice pops and inspire you to think of your own out-there flavor combos.

All the fancy ice-pop contraptions and adventurous combinations in the world, though, don't take away from the memories of the simple frozen treats I once enjoyed. Luckily, reliving those memories is just an ice-cube tray away.

This recipe is adapted from Gilt Taste, an online food marketplace that also features essays and recipes. I used Cointreau as my triple sec, leftover Prosecco for my white wine, and Whole Foods ginger ale, which adds a smoky spice. 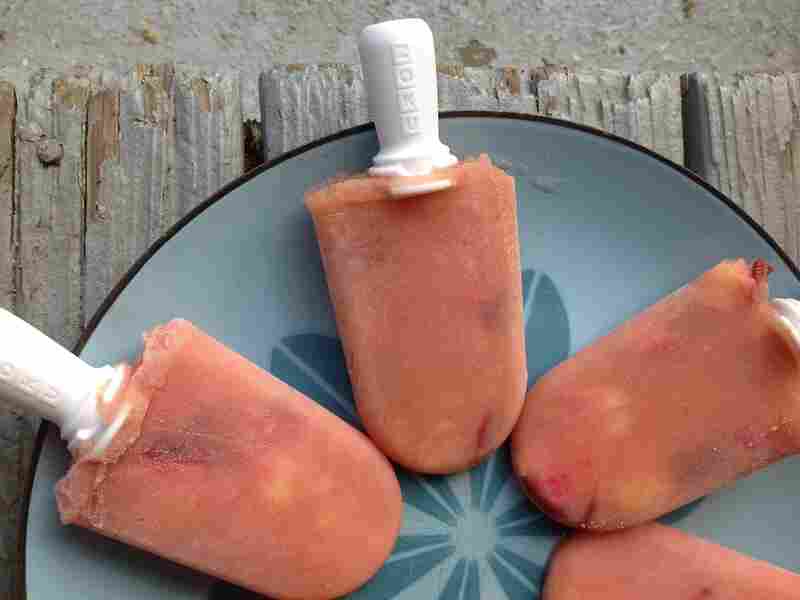 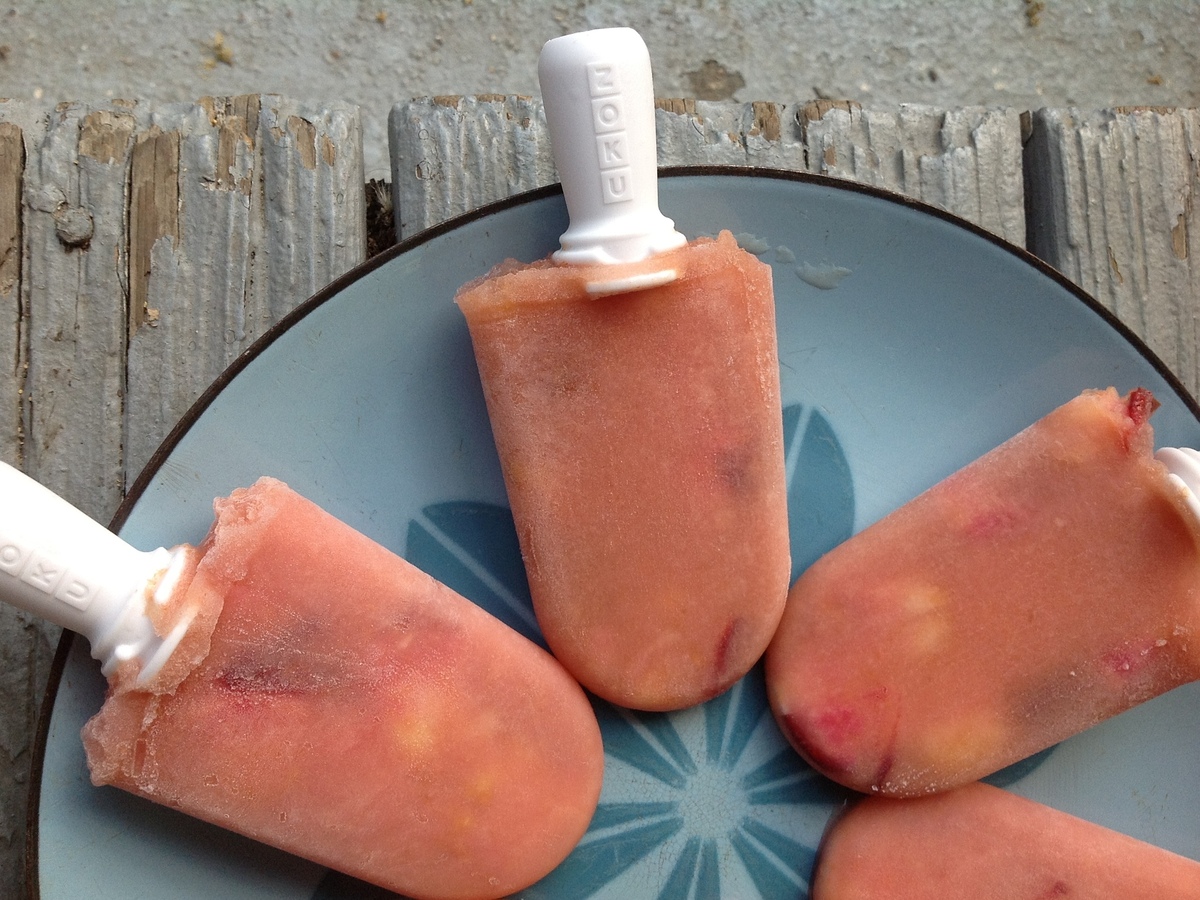 Pit and roughly chop 3 of the peaches and put into a blender or food processor. Reserve 1 peach and cut it into a small dice and set aside.

Blend the remaining ingredients until smooth, about 15 seconds. Fold the diced peach into the mix after blending. Fill the pop molds and insert the sticks. Freeze for at least 6 hours.

Dip mold in hot water or run under hot water from a faucet for a few seconds. Unmold and store in plastic sandwich bags for up to 1 week.

Adapted from Meltdown's Mexican-inspired recipe, this combination perfectly captures the flavors of summer in a way that might be surprising to some Americans. If your tapioca flour gets clumpy or gummy, just strain the milk mixture through a fine-mesh sieve before cooling. 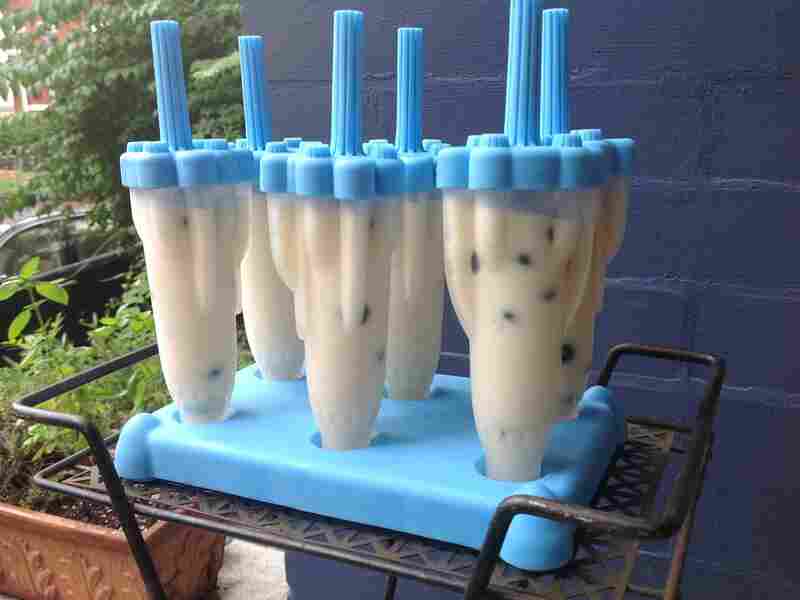 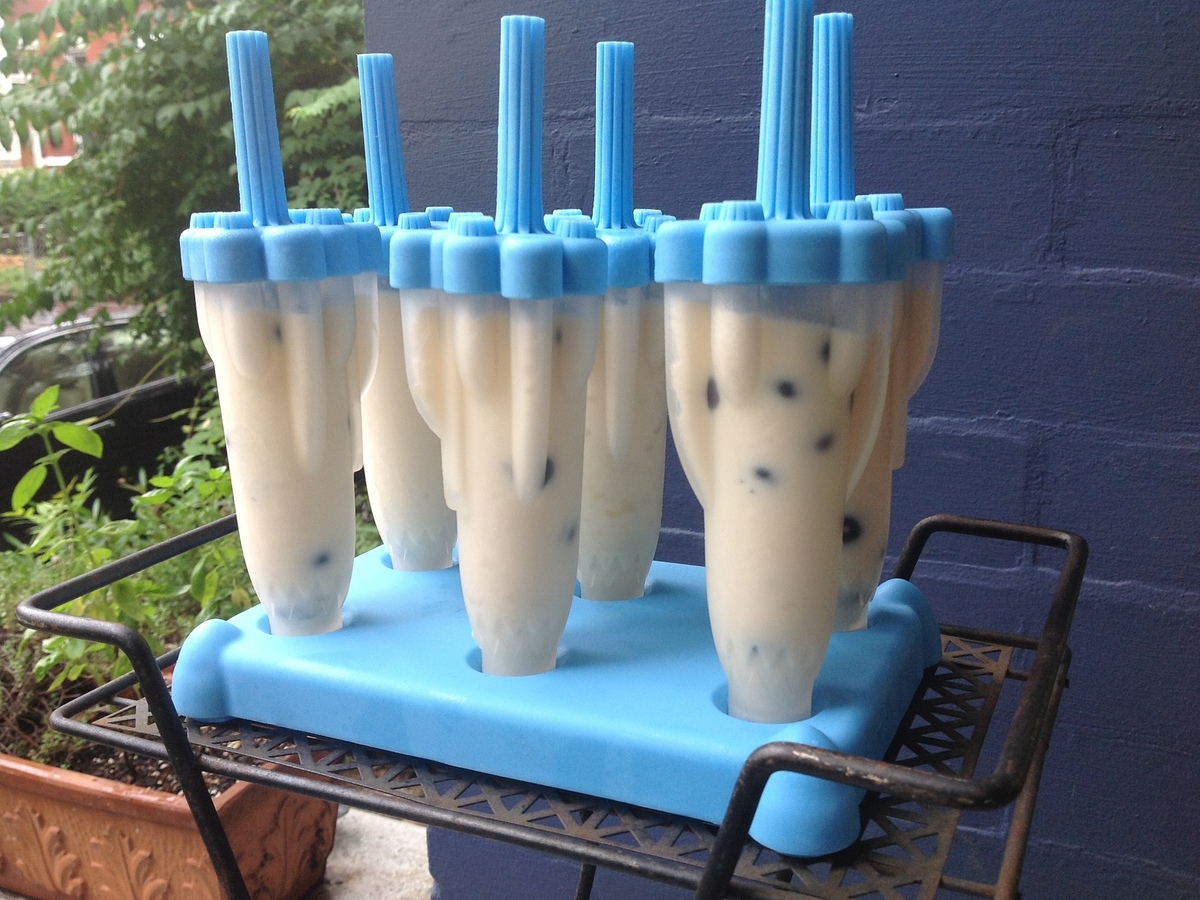 In a saucepan, bring milk and cream to a simmer. Add tapioca flour and whisk until dissolved and mixture has thickened. With the dull side of a knife, give the cob a good downward push to release liquid and some pulp. Add it with the cob to the milk mixture along with vanilla extract, sugar and salt, and simmer for 10 minutes.

In a separate saucepan, bring to a boil then simmer the corn kernels with just enough water to cover them. Cook for 10 minutes.

Pour into container or pitcher with a spout, and pour into molds and freeze.

Jeanne Chang only opened her Lil' Pop Shop in Philadelphia in May, but the shop has already been named among Food & Wine magazine's 2012 list of best ice pops. Chang, who has a pastry chef background, adapted the goat cheese base recipe from Jeni Britton Bauer's Jeni's Splendid Ice Creams at Home (Artisan 2011). But she says the gorgeous blackberry sauce recipe is all hers, and it "can be spooned over everything. We joke that we should just drink it through a straw." 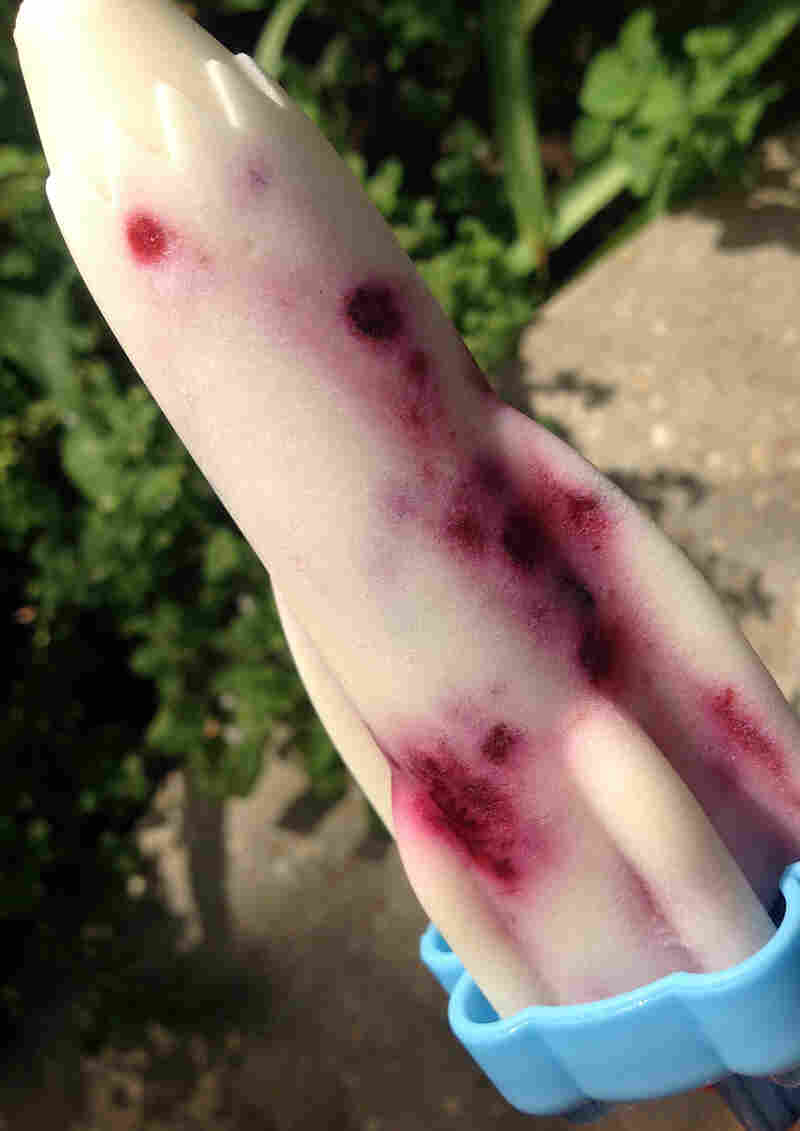 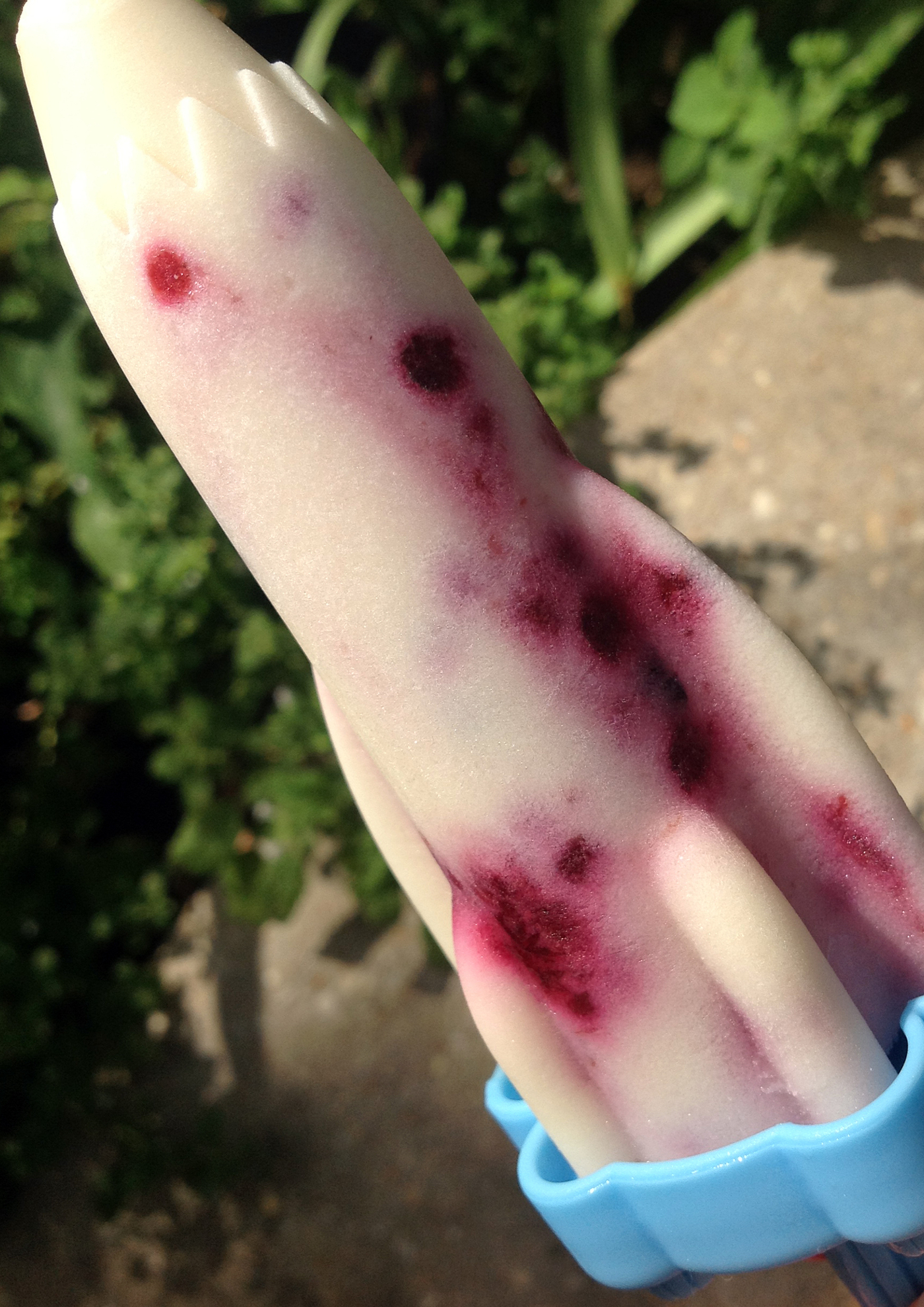 Combine milk and cream in a pot. Reserve about 1/4 cup of the mixture and whisk in cornstarch to make a slurry. Add sugar to milk and bring to a rolling boil for 4 minutes. Add cornstarch slurry to milk mixture and stir well for about a minute until mixture is slightly thickened.

In a small pan, cook berries 5 to 10 minutes until softened, pressing gently to release the juices. Turn off heat. Add honey and lemon zest, and cool completely.

When both mixtures are cool, fill molds 3/4 of the way with goat cheese base. Spoon approximately 1 tablespoon of blackberry sauce on top, leaving a bit of space for expansion during freezing. Use a spoon, pop stick or chopstick to swirl the sauce throughout the pop. Freeze according to mold instructions.

Leftover base and sauce can be refrigerated for up to 5 days.

One reason I wanted to test the Zoku maker was because I was skeptical that anyone could replicate all these fancy pops at home with the ease they were claiming. It really is pretty darn easy. This recipe is adapted from the recipe book Quick Pops written by Jackie Zorovich and Kristina Sacci specifically for the Zoku pop maker. 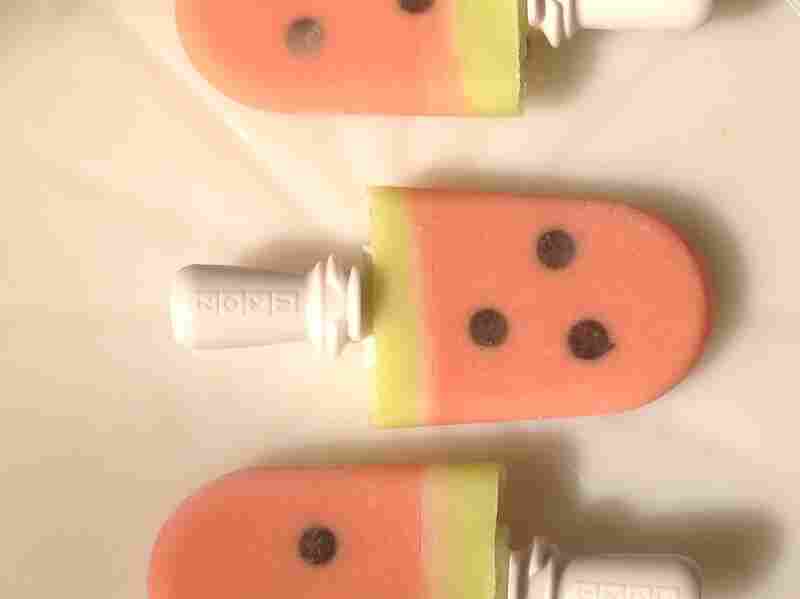 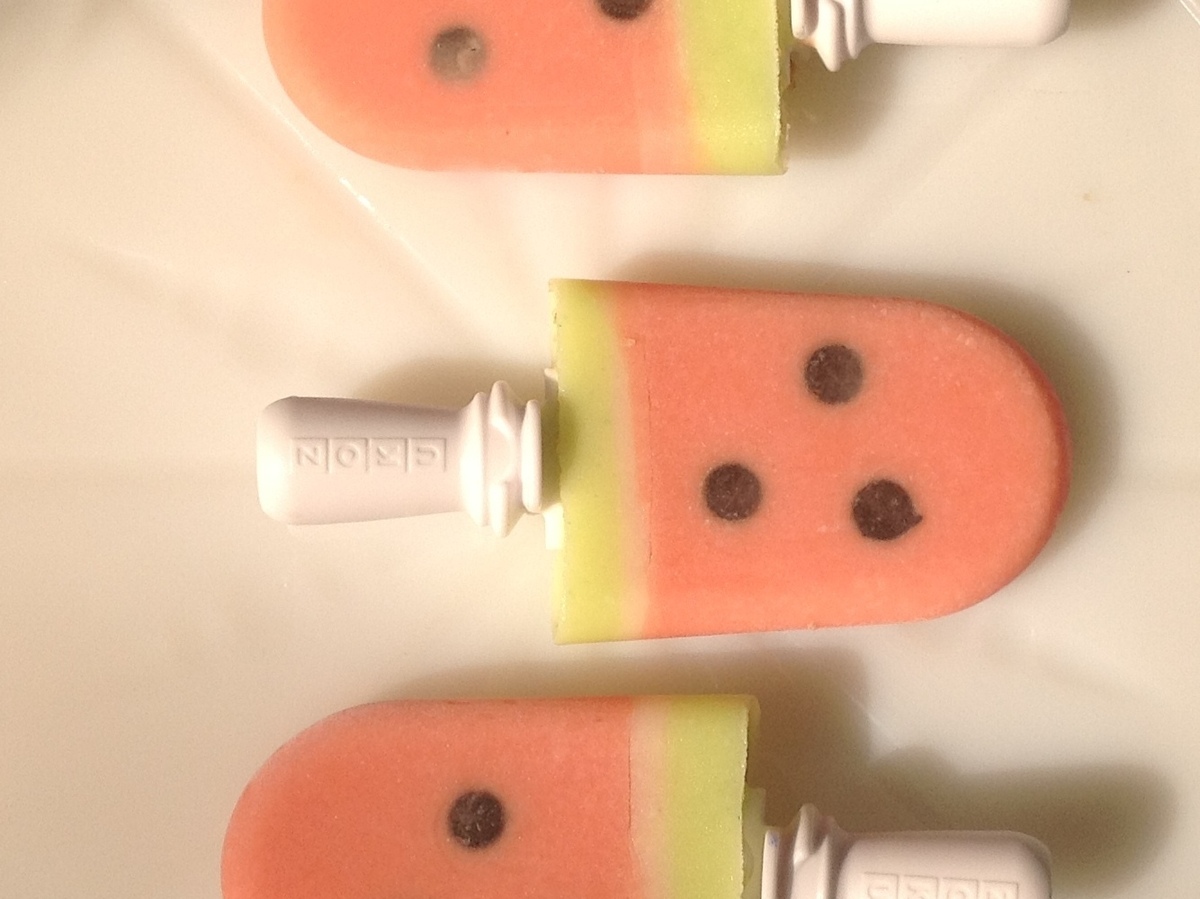 Add watermelon to a blender and puree until smooth (about 30 seconds). Using a fine-mesh sieve, strain the mixture into a bowl, using a spoon to scrape the inside of the sieve so it goes through faster. Whisk in the yogurt, agave and lemon juice.

For the lemon layer, mix the milk, water, lemon juice and agave in a small bowl. Transfer 2 tablespoons of the mixture to a small bowl and set aside. Add the food coloring, if using, to the remaining mixture and stir. 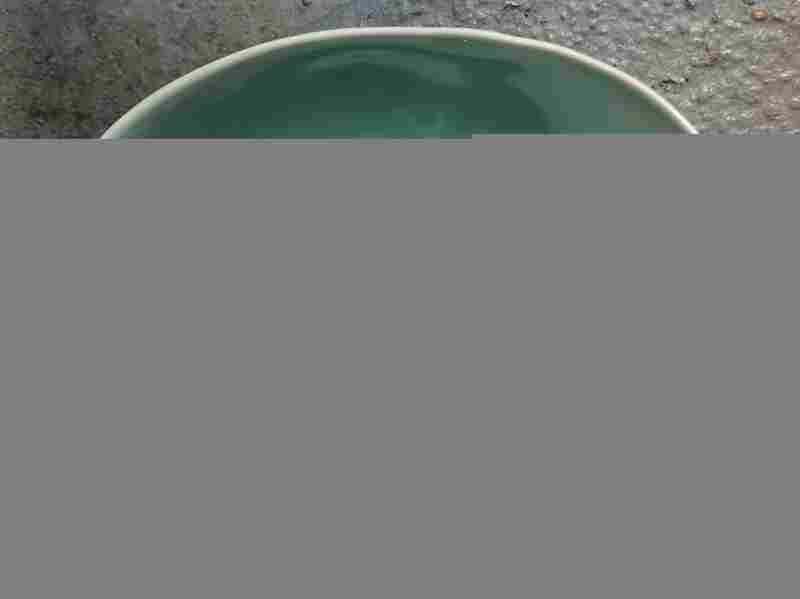 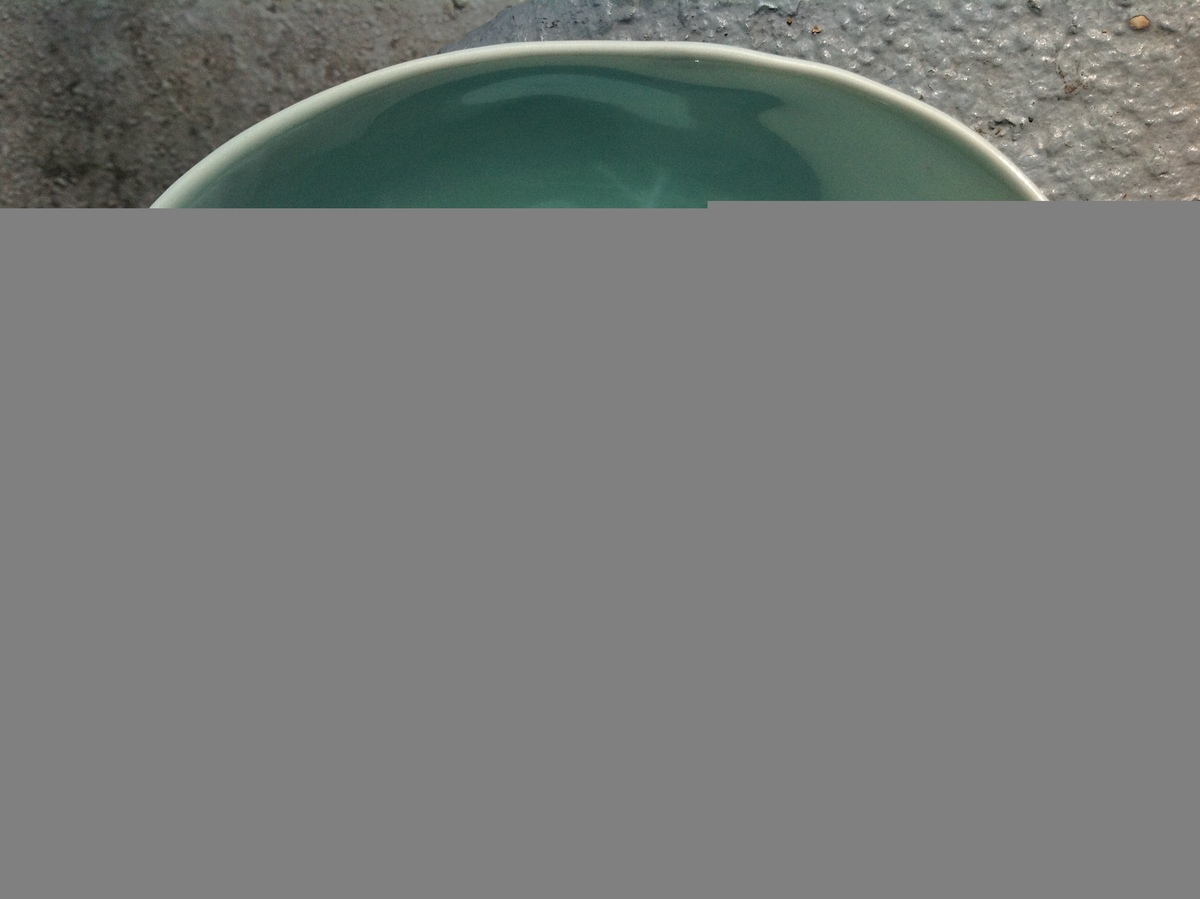 This simple recipe — adapted from a recipe by Liz Davis, owner of Dairy Godmother in Alexandria, Va. — is a bright, clean finish to a Saturday-night fiesta or even a weekday taco night. The lime-juice base is equally enjoyable when frozen without the jalapeno (for kids or spice-averse adults), and any leftover juice is drinkable over ice. Add more pepper slices for more spice, or steep the pepper slices in some of the lime juice for a few minutes before pouring into the molds for a spicier pop.

1/4 teaspoon of lime zest, or a drop of lime oil

Boil 1 cup of the water, pour over sugar, and stir until dissolved. Add juice, zest and remaining water, which should be cold or room temperature. Chill mixture for an hour.

Place a slice of pepper in each mold, fill with cold lime mixture, and freeze. Pepper slices will usually float.