Accessibility links
Franchises Age, But Their Stars Stay Forever Young The Bourne Legacy is the latest movie to recast a main character in order to continue the franchise. But from Bond to Bewitched, Batman to Dumbledore, Hollywood has never been afraid to dump old stars and seek fresh blood for the sake of a character's longevity. 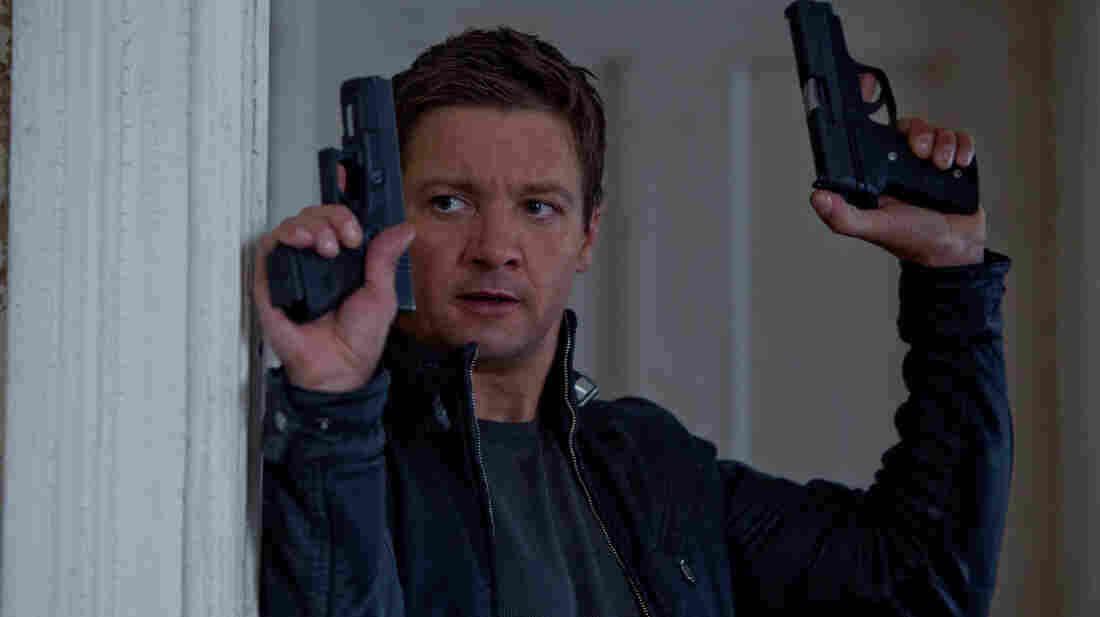 Jeremy Renner stars in The Bourne Legacy, the latest in a franchise previously fronted by Matt Damon. But when an actor departs a Hollywood cash cow, it can be less a death knell than a chance for rejuvenation. Mary Cybulski/Universal Pictures hide caption

The Bourne Legacy, which opens in theaters this week, is the fourth thriller in the series, and the first without either Jason Bourne or the star playing him, Matt Damon. They're suddenly not necessary, even though the series is named for Bourne? Why am I not surprised?

When a film hit becomes a film franchise, it's not wise to get too attached to the stars. Tinseltown takes that "show-must-go-on" thing pretty seriously with pictures that make a couple of hundred million dollars each, and contract disputes, artistic differences, even deaths aren't going to interfere when profits are on the line.

Harry Potter fans were mostly lucky. There was just one major replacement in a decade of films: Professor Dumbledore, who of course was shrouded helpfully behind a thick beard. But we've seen five Batmen in eight movies, three Hulks in as many outings, and then of course there's the granddaddy of the recast film franchises — the Bond movies, in which we got 007s who, offscreen, go by the names Sean, George, Roger, Timothy, Pierce and now Daniel.

And in the 007 movies, that's barely the start. The "alphabet" parts also changed — new Qs to give Bond his gadgets, new Ms to give him his orders. M even changed gender without audiences batting an eye, possibly because all these characters are British, and the Brits had been watching a regenerating Doctor Who nearly as long as they'd been attending to James Bond.

Not that American audiences can't keep up. They'd been perfectly comfortable with those interchangeable Darrens on TV's Bewitched back in the 1960s, when Dick York was replaced by Dick Sargent, a casting move that really should've inspired a "Sgt. York" headline, don't you think?

There have always been lots of replacements on TV, possibly because there, almost everything's a series, and with long-running hits, producers don't have much choice but to barrel ahead, as they did on Fresh Prince of Bel-Air, when Janet Hubert's Aunt Viv got replaced by Daphne Maxwell Reid's Aunt Viv after the third season. (She was holding her new infant when another character said, "Y'know, since you had that baby, there's something different about you." Will Smith just gave the camera a knowing look, and that was that.)

With movies, though, there's more at stake, which is why producers have developed what they call the reboot. Not quite a remake, but not quite new either, a reboot, I'm convinced, is called that because it's a good way to gently kick a star to the curb. Spider-Man's Tobey Maguire, for instance; he was 27 when he first played high schooler Peter Parker, but is now 37 — old enough to have fathered a high schooler of his own. So for the reboot, The Amazing Spider-Man, we get Andrew Garfield, who's amazing, though not all that much younger.

Anyway, this process is not going away, unless audiences simply stop showing up. At which point, Hollywood will stop making sequels, prequels and, for symmetry, shall we call reboots re-quels?

Stop making them until producers can figure out how to reboot the whole industry, that is — because those three forms accounted for all 12 of the top dozen box-office hits in 2011.