Accessibility links
Crazy Smart: When A Rocker Designs A Mars Lander Adam Steltzner's father told him he wouldn't amount to much. He spent his youth barely passing school and "studying sex, drugs and rock 'n' roll," he says. Then he found a purpose in the stars — and led the team that dreamed a daring new scheme to get NASA's latest rover on Mars. 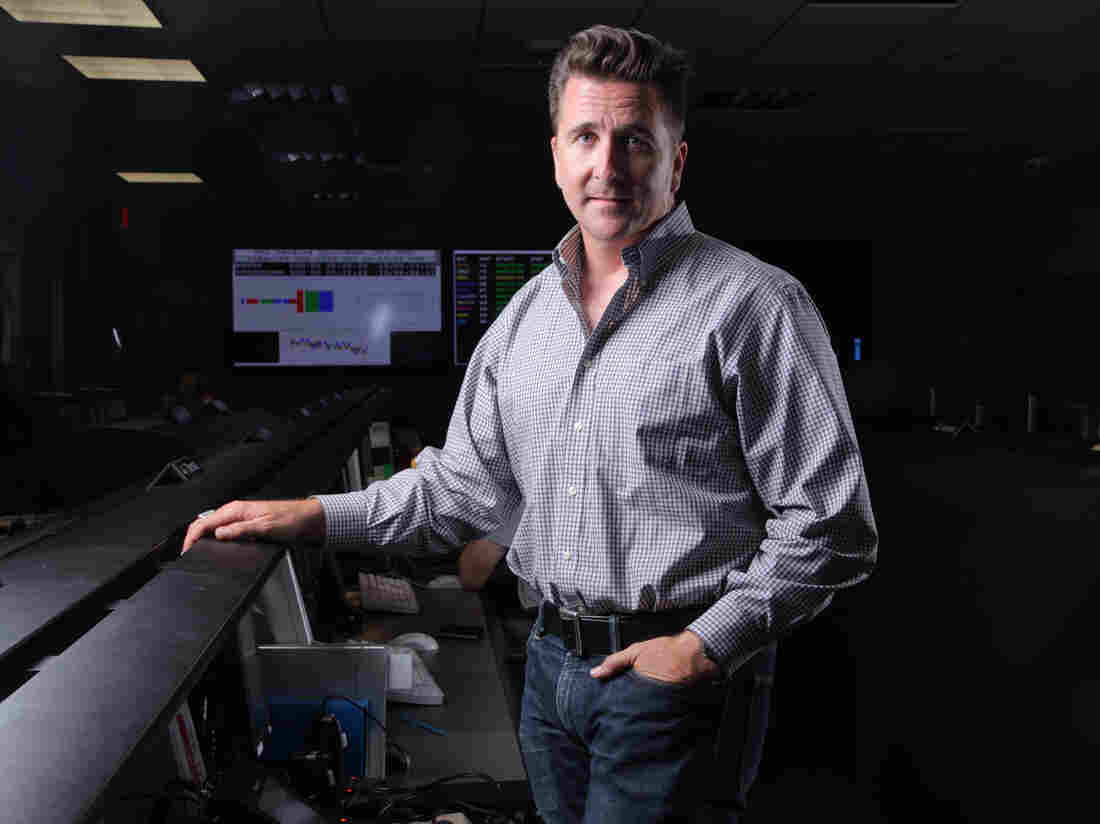 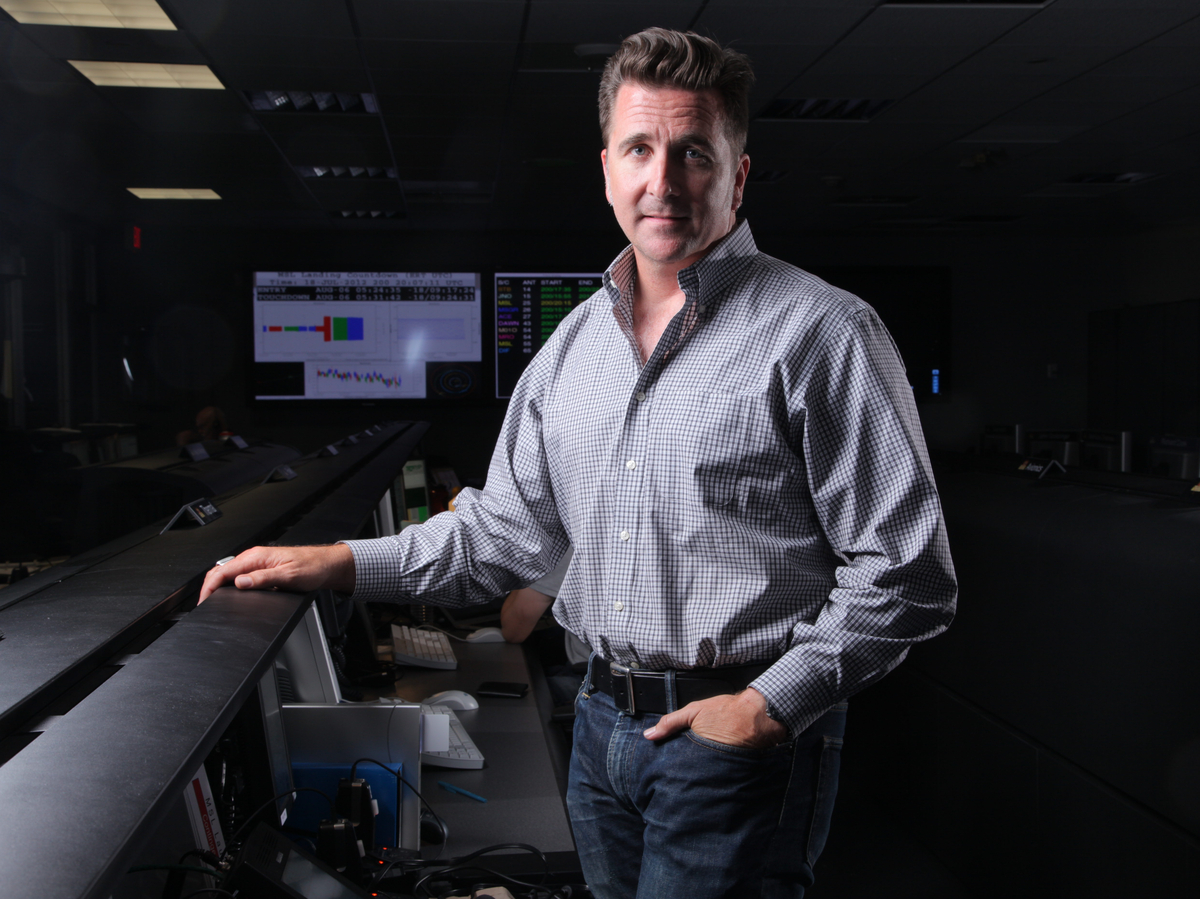 It's called the seven minutes of terror. In just seven minutes, NASA's latest mission to Mars, a new six-wheeled rover called Curiosity, must go from 13,000 mph as it enters the Martian atmosphere to a dead stop on the surface.

During those seven minutes, the rover is on its own. Earth is too far away for radio signals to make it to Mars in time for ground controllers to do anything. Everything in the system known as EDL — for Entry, Descent and Landing — must work perfectly, or Curiosity will not so much land as go splat.

The team that invented the EDL system has spent nearly 10 years together, designing, building, testing, tweaking, retesting and retweaking. Now all they can do is sit and wait to see if their design works.

Because the new Mars rover is five times heavier than its predecessors, NASA had to come up with a totally new landing system. Here's a step-by-step look at how it is supposed to work.

So you won't be surprised to learn that this is a rather nerve-wracking time for Adam Steltzner, the EDL team leader.

"The product of nine years of my life will be put to the test Sunday evening," Steltzner told me when I visited him at NASA's Jet Propulsion Laboratory in Pasadena, Calif., in late July. "And so that is personally anxiety provoking."

I don't know about you, but I tend to think of engineers as serious buttoned-down types. Steltzner is anything but.

He has pierced ears, wears snakeskin boots and sports an Elvis haircut. He's quick to laugh and curious about everything. Steltzner's laid-back style makes team meetings a jolly affair. I stopped by one of those meetings during my visit. The jollity was still there, but it was clear that the prelanding tension was rising.

"We are 19 days from landing," he told his team. "Is that freaky or what? Freaks me out to no end. Every time I say that, my back gets tight."

Steltzner had some advice for his colleagues.

"If any of you are sharing any of the emotional experience I am, keeping ourselves, like, chill, and focused and not freaking, is a good thing to do," he said.

Watch Steltzner and others at NASA explain the hair-raising sequence of events that must go perfectly right in order for Curiosity to land safely on Mars on Sunday night.

Steltzner's path to becoming team leader for this new Mars lander was hardly direct. Unlike many successful engineers, he struggled at school. An elementary school principal told him he wasn't very bright. His high school experience seemed to confirm that.

"I passed my geometry class the second time with an F plus, because the teacher just didn't want to see me again," he says.

His father told him he'd never amount to anything but a ditch digger, a remark he still carries with him years later.

Maybe that's because school wasn't a priority, particularly with the distractions of the flower-power era in the Bay Area.

"I was sort of studying sex, drugs and rock and roll in high school," says Steltzner. It wasn't just the long hair. "I liked to wear this strange Air Force jump suit. And my first car was a '69 Cadillac hearse. I put a bed in the back."

Talk about a night to remember. "Well, I was younger. It was a different time," says Steltzner.

After high school, the plan was to be a rock star. While he waited for stardom, Steltzner played bass guitar in Bay Area bands, watching his friends graduate and go off to college.

Finding Purpose In The Stars

But then something happened. As Steltzner tells it, he was on his way home from playing music at a club one night when he became fascinated with the stars, especially the constellation of Orion.

"The fact that it was in a different place in the sky at night when I returned home from playing a gig, than it had been when I'd driven out to the gig," he said. "And I had only some vague recollection from my high school time that something was moving with respect to something else, but that was it."

As crazy as it sounds, that experience was enough to motivate him to take a physics course at the local community college. That did it. He was hooked.

The fog of sex, drugs, and rock and roll lifted. He had to know all about the laws that govern the universe. The rocker wound up with a doctoral degree in engineering physics.

After years of being somewhat aimless, he was glad to be involved in something more practical, a career that produced something tangible at the end of the day.

"With music, how your band is thought of has to do with how you dress, and who you open for, or who opens for you," he said. "That ephemeral, not really able to get a solid understanding of good and bad was tough for me, and the thing that engineering and physics gave me was this idea that there was a right answer, and I could get to it."

I asked Steltzner whether he would have been just as happy getting to the right answer while designing waste-treatment facilities. Did it have to be something as glamorous as designing a landing system for a Mars probe? He thought for a minute before he answered.

"I grew up in an era where space was revered," he said. "So I think there's a kind of natural ego drive to be involved in something so sexy. And I came from rock 'n' roll, and there's a lot of sexy in rock 'n' roll. So in terms of, really, just what I would need to measure myself, it could have been waste treatment, but I also needed a little bit of sexy."

Steltzner and his colleagues considered several options before hitting upon the 'sky crane' concept.

He's got the sexy, but Steltzner has added a dash of crazy to the mix, especially when it comes to the design he and his team invented for the landing system.

A totally new Mars landing system was needed because other systems, including the airbags used on earlier rovers, were considered too wimpy to land Curiosity safely. The craft is the biggest rover yet, weighing in at more than 2,000 pounds — about five times as heavy as the Spirit and Opportunity rovers sent to Mars in 2003. Then there's the pesky Martian atmosphere. It's too thin to make parachutes alone effective, and too thick to make rocket brakes enough.

So Steltzner's team came up with a kind of rocket-powered platform that hovers over the Martian surface and lowers Curiosity down on a cable — a system that was once derisively referred to as "rover on a rope."

Crazy, but to an engineer, crazy smart.

"It ends up being we've come to really love this system," he said.

And as Steltzner will be the first to tell you, he didn't invent it all by himself.

"This is way bigger than any one person, way bigger than any five, 10, 20, 100. At one point, there were almost 2,000 people working on this project," he said. "So to bring all those people together takes some teaming. And also, I like people. So bringing that sense of togetherness together is important for me."

We'll know on Sunday night California time whether all that teamwork invented a landing system able to withstand the hazards Mars can throw at it.

Produced for broadcast by Rebecca Davis.