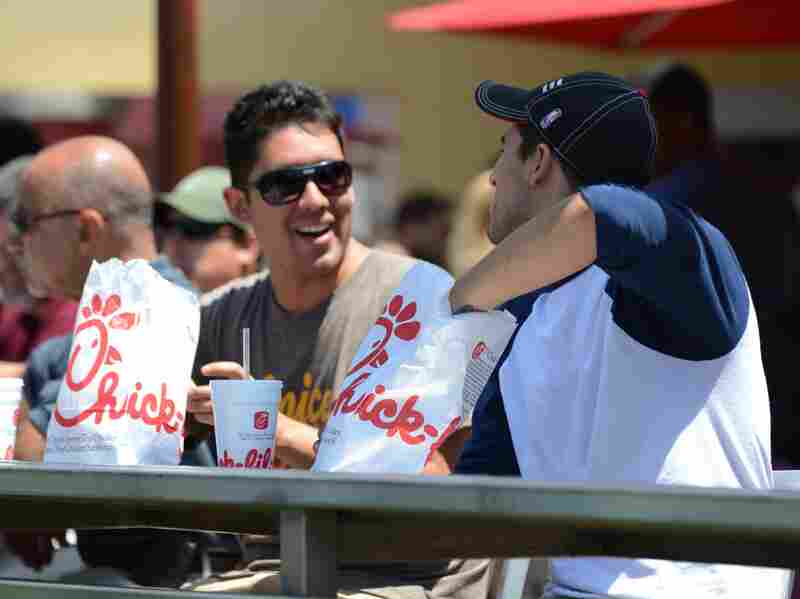 Two men prepare to have lunch on the patio of the Chick-fil-A in Hollywood, Calif. on August 1. Thousands of Americans turned out Wednesday to feast on fried chicken in a politically-charged show of support for a family owned fast food chain which opposes gay marriage. Robyn Beck/AFP/Getty Images hide caption 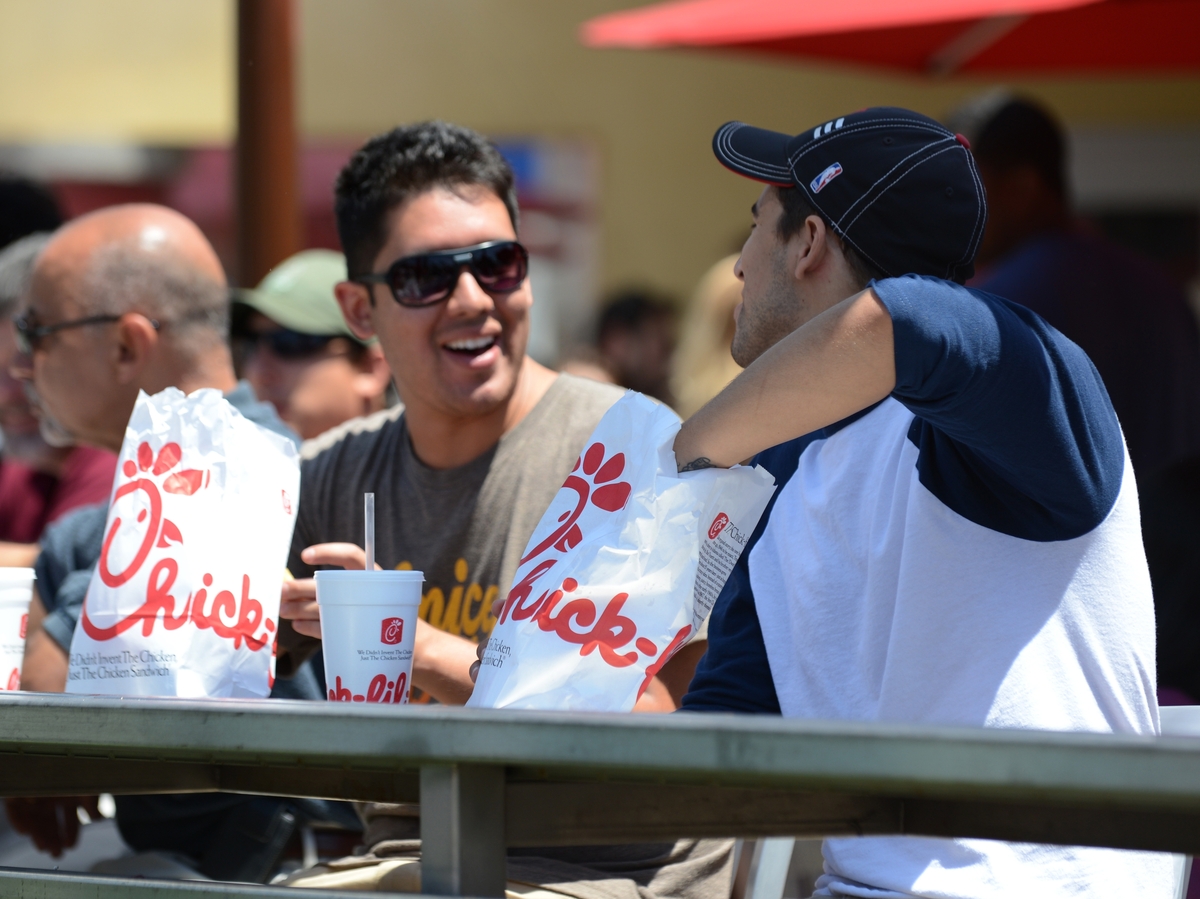 Two men prepare to have lunch on the patio of the Chick-fil-A in Hollywood, Calif. on August 1. Thousands of Americans turned out Wednesday to feast on fried chicken in a politically-charged show of support for a family owned fast food chain which opposes gay marriage.

Mark Hemingway is a senior writer for The Weekly Standard.

The Chick-fil-A controversy has no doubt been polarizing in some corners of the country, but the undeniable success of yesterday's nationwide rally to support the fast food chain means we're likely to remember August 1, 2012 as Silent Majority Day.

While the fast food corporation has stayed mostly mum since the fallout from the remarks in support of traditional marriage by Chick-fil-A president and COO Dan Cathy, the company broke its silence about the events yesterday. "We are very grateful and humbled by the incredible turnout of loyal Chick-fil-A customers on August 1 at Chick-fil-A restaurants around the country," said Steve Robinson, executive vice president of marketing in a statement. "While we don't release exact sales numbers, we can confirm reports that it was a record-setting day."

Across the web, patrons tweeted and blogged pictures of the long lines at registers and drive-thrus across the country. Other anecdotal evidence piled-up: "Chick-fil-a owner friend said they got message from corporate to expect 15-20% more in sales yesterday. Got over 200% more in sales." Indeed, there were reports that a number of franchises ran out of chicken.

However, details on all that happened remain sketchy because as, previously reported, the major media are trying to make sure that the Silent Majority is silenced. But more than that, the media weren't even trying to hide their antipathy. Mark Krzos, a reporter for a Gannett newspaper in Florida, actually wrote on his Facebook page, "I have never felt so alien in my own country as I did today while covering the restaurant's supporters. The level of hatred, unfounded fear and misinformed people was astoundingly sad. I can't even print some of the things people said... Such a brave stand... eating a goddamn sandwich."

Of course, you don't have to oppose same-sex marriage to feel that politicians threatening business owners because of their private religious beliefs is the far more dangerous attitude. And that's regardless of the fact Cathy's beliefs on marriage are held by a majority of Americans, and the president himself publicly agreed with Cathy until a few months ago.

In fact, a number of gay Americans noted their support of Chick-fil-A yesterday. Along these lines, it seems it's been definitively proven that Chick-fil-A does not shoot lasers at their gay customers. Regardless of your stance on same-sex marriage, it's encouraging that most Americans prefer their chicken sandwiches with waffle fries instead of a side of cultural fascism. Some tried to disrupt Chick-fil-A Appreciation Day by going there and asking for free water to take money from the corporation, only to be stymied by the restaurant's notoriously cheerful employees. (In fact, the guy that filmed this video eventually removed it from his own YouTube channel, presumably after he realized it made him look like a jerk.)

Contrary to Gannett reporters with unresolved issues, I'm happy to report that the scene at my local Chick-fil-A in Northern Virginia was festive. In the line out the door I saw businessmen sliding BlackBerrys out of belt holsters and taking pictures of the line for posterity. There were cops and servicemen, enough different races for a Benetton ad, and, oh, lots and lots of families. In other words, it looked a lot like America.

However, by the time I ate my spicy chicken sandwich and left, three protesters had arrived and were handing out flyers and otherwise exercising their rights. Still, the protesters looked more confused than anything, and even the few Chick-fil-A supporters that engaged them were more polite than outwardly defiant. Same-sex marriage may remain polarizing, but if yesterday is any indication, enjoying milkshakes and tasty, affordable chicken sandwiches is something that most Americans can agree on.