Accessibility links
The Nation: To Be American, Christian And Oppressed The backlash against Chick-fil-A's anti-gay policies has prompted its own backlash from conservative Christians fighting against what they argue is religious discrimination. The Nation's Cord Jefferson says they are overreacting, and that Christians have it pretty easy in the U.S.

The Nation: To Be American, Christian And Oppressed

The Nation: To Be American, Christian And Oppressed 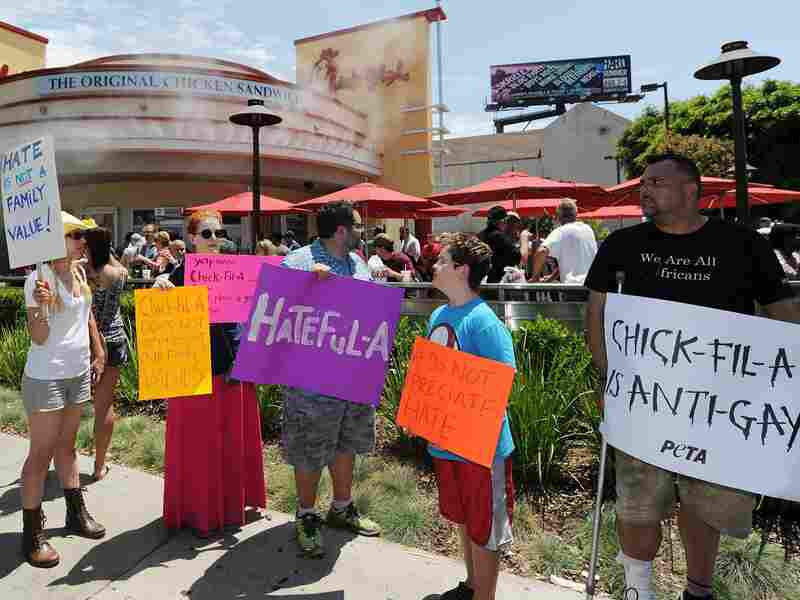 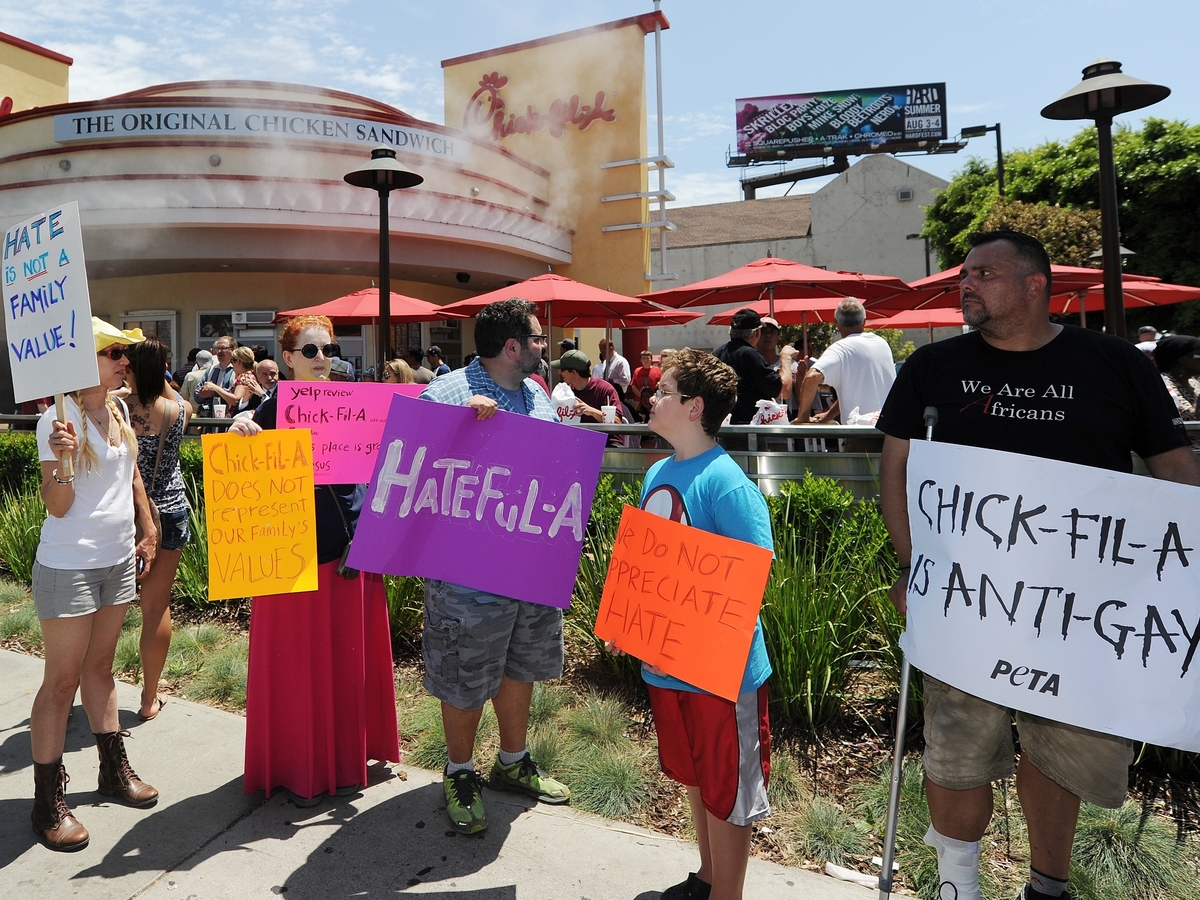 Protestors hold signs outside a Chick-fil-A fast food restaurant, August 1, 2012 in Hollywood, Calif. Thousands of Americans turned out to feast on fried chicken in a politically-charged show of support for the family owned fast food chain which opposes gay marriage.

Cord Jefferson is a writer for The Nation.

I'd never have guessed Christians have it so hard in America until yesterday, when two incidents reminded us of how put upon our nation's worshipful majority is.

The first came when, at the behest of former Arkansas Governor Mike Huckabee, thousands upon thousands of people turned out for Chick-fil-A Appreciation Day. After Chick-fil-A's COO said recently that same-sex marriage brings "God's judgment on our nation," the fast-food chain with deep roots in the South has become a target of ire for Americans who support gay unions. Some people, myself included, have said they intend to boycott Chick-fil-A, while politicians in Chicago and Boston say they want to block Chick-fil-A from opening restaurants in their cities.

In response to the Chick-fil-A backlash, Huckabee teamed up with other right-wing pundits like Glenn Beck to make August 1 Chick-fil-A Appreciation Day, a day for conservatives around the country to show their admiration for a company that heralds Christian ideals. The ad hoc holiday worked, and many Chick-fil-A locations saw standing-room-only crowds.

"It's extremely encouraging to see this massive push back and support from prominent political figures," wrote conservative blogger Michelle Malkin. "But before and after today, many small businesses and lesser-known companies will be battling government officials and progressive shakedown artists because of their religious beliefs and principles. They deserve your support and attention, too."

Echoing Malkin's assertions that Christianity is under fire from the godless hordes is Congressman Mike Kelly, R-PA. Yesterday, while conservatives were winning in Chick-fil-A drive-thrus everywhere, their fellow ideologues on the Hill were losing a protest against President Obama's requirement that private insurers cover birth control. The contraceptive mandate went into effect Wednesday, and, in dissent, Kelly and some of his GOP colleagues held a press conference, where Kelly said the following:

I know in your mind you can think of times when America was attacked. One is December 7th, that's Pearl Harbor day. The other is September 11th, and that's the day of the terrorist attack. I want you to remember August the 1st, 2012, the attack on our religious freedom. That is a day that will live in infamy, along with those other dates.

Though the congressman's words differ slightly in depth and tenor from Malkin's, their ultimate points are the same: Christians in America are in a sort of wartime in which they are fighting for their religion and, if Kelly's terrorist bombing analogies are to be believed, maybe even their lives.

Unfortunately for Malkin, Kelly and any other Christian who actually believes their melodramatic pap, the evidence that America is in the midst of some great paradigmatic shift away from Judeo-Christian virtues is nearly nonexistent, regardless of how many people boycott Chick-fil-A. Even less of a reality is that our nation is actively working to destroy Christianity and its acolytes the way the Japanese sought to decimate Pearl Harbor. For proof of this, one need only look everywhere.

When it comes to Christian corporations operating completely free of leftist "attacks," America has everything from slinky women's clothing store Forever 21, which emblazons its shopping bags with the words "John 3:16," to Tom's of Maine, a hippie natural toiletries line whose founder once attended Harvard's Divinity School. In-N-Out Burger is a heavily Christian operation, as is Tyson Foods, the world's largest purveyor of chicken. And like Forever 21 and Tom's of Maine, In-N-Out and Tyson's appear to be filling their coffers with money from customers across the political spectrum. Why aren't these businesses being affected by this war on Christianity?

Outside of businesses, the Boy Scouts of America remains so Christian that it won't allow atheists or agnostics within its ranks, nor does it tolerate openly gay scout leaders. Our current president is Christian, like every president before him, and more than 90 percent of the 112th Congress is some iteration of Christian. Nearly all our important political addresses are appended with "God Bless the United States of America," and millions of American children are still forced to pledge their allegiance to "one nation under God" every weekday.

In short, if this is not a country that remains — despite its Chick-fil-A boycotts — one steeped deeply and intractably in Christianity, I'd hate to see what kind of stringent theocracy a true Christian nation would resemble. While I agree with people like Mother Jones reporter Adam Serwer, who argues that liberal cities banishing Chick-fil-As is a bridge too far, the truth is that even if such drastic measures came to pass, the Christian God and the Christian Bible would still be everywhere in the United States, and neither is in any danger of being dethroned. That people like Malkin and Kelly like to pretend otherwise means one of two things: they are either paranoid religious fanatics who actually believe their house of worship is in jeopardy, or they're playing politics and hoping to gin up the rabid religious fervor that paints an angry red so much of Republicanism these days. Regardless of their motives, their behavior is far from what one would expect from a true lamb of Christ. Then again, their lips slick with fast-food grease, many Christians don't appear to care too much about authentic Christianity anymore.